*This is a submission piece by Marcus Neo. On his website, Marcus claims to give no B.S., tough love, actionable advice to help you succeed in your dating life.

I was never the guy to seriously think about my dating life and thought it was something left to luck. I went to school, got my certificates, and met a few girlfriends like it was a natural part of the process.

If things were to go wrong, I’d portray a tough guy image and brush it off. But two months before enlisting, my ex-girlfriend broke up with me over text not long after I flunked my A levels. She prioritised other areas of her life, and I was going into the military soon.

Heartbroken, I spent years debating in my head if the relationship could have been better. In hindsight, it was one of my most life-defining events which contributed to my personal growth. It made me realise no matter whose fault it was, it was my responsibility to get better from there.

Lessons from The Game

Because I sucked at school, I often went to the bookstore to read up on the world at large to tell myself I was learning something different. That was how I chanced upon the book The Game by Neil Strauss, which led me to read a hell lot on dating, business, psychology, and philosophy.

Here’s the first thing I took away from The Game: you can teach yourself anything, as long as you take responsibility for it. If you can change your luck with girls, you can improve any aspect of your life.

And I was the only person I knew who was overly excited about this concept because I ran around shoving The Game into everyone’s face while most people ignored me.

Once, I took a beautiful, intelligent girl to a bar near my house. Halfway through our date, she grabbed my phone and found my pre-scripted lines, pick up lines and texts in my iPhone notepad.

Holy f**k, I thought, I was going to get found out. Surprisingly, she didn’t say anything. That taught me a powerful lesson. It’s not the lines which attracted the girl but the fact that I was willing to spend so much time and effort to score a date.

However, don’t get me wrong. The lines and techniques were useful for helping a heartbroken, middle-class, short, Asian, 19-year-old guy to start talking to girls. But to take dating a step further, you’ll need to learn how to connect emotionally with others.

First Success: Year One in University

I also read about self-help and personal development, bought new clothes, and changed my body language and the way I spoke.

I remembered I teased a girl and she laughed at my jokes. Wow, girls find me funny now. Awesome.

But getting girls to giggle brought me nowhere, as I still couldn’t get a girlfriend or get laid. It was frustrating for a while because of all the time invested in memorising lines and techniques.

The biggest period of ‘success’ came when I was finished with the military and enrolled in my first year of University, where I learnt self-acceptance and doing things without fear.

In hindsight, it wasn’t all the theories and lines that helped, but the fact that I was driven, even if being driven meant learning how to talk to girls, that girls were attracted to.

How I got into Coaching

One day, I thought how awesome it would be if I could teach guys to talk to girls. However, I didn’t start off as a dating coach, but as an SEO consultant because I was too shy.

“Marcus teaches guys how to pick up girls now!?! NO WAY!” was the line I heard from my friends countless times.

Though I eventually got into coaching because of the money and lifestyle, I quickly realised it wasn’t as glamorous as YouTube portrays it to be.

Entrepreneurship is hard. It’s not for everybody. I’m currently still marketing the business and taking up side projects wherever I can. But I enjoy writing about human behaviour, relationships, something I genuinely care about.

Today, my clients are mostly engineers, IT consultants and nerdy guys. 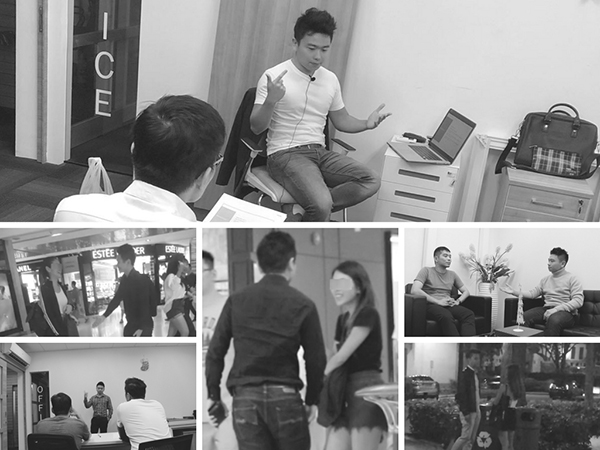 Through this process of figuring out this area of my life, I re-learned how to learn.

I took a different approach towards academics, fitness, and finances. In areas of my life where I thought I had zero control over, I learnt to better myself with knowledge, patience, and practice. Now that I’m a better communicator, I’ve also learnt to connect with my strict Asian parents.

Ultimately, it wasn’t just about the sex and rock n roll, but about a lifetime of growth.

For girls and guys out there, remember this: The first step is self-reflection, and then self-improvement. If you got rejected, that meant that you got rejected, there’s no better explanation about it. It’s extremely hard to accept your flaws and most people don’t do it. If he or she doesn’t like me, screw him or her, right?

After all, it’s easy to criticise a person on social media and get the instant gratification of your friends supporting you, whether or not they know the underlying truth.

It’s also difficult to ask yourself: this hot girl or hot guy probably has opportunities thrown at him on a daily basis, so how can I stand out from all of them? How can I change to be a better fit for this hot girl or rich guy?

Secondly, not everybody is for everyone. It’s an advice I needed to hear for myself over the years.

I use to beat myself up when I couldn’t attract the hot girl in the club whose attention span was of a goldfish’s. I think a lot of us sacrifice real emotional connection and support for superficial traits such as looks or social status, just to impress others and friends. I’m guilty of it as well.

However, this isn’t exactly the healthiest of ways to lead our dating lives, much less a long-term relationship.

The final piece of dating advice I’ll give is to experiment. I’m not saying to never settle, but to experiment until you know exactly what you want.

So experiment, fail and take it all in. Only then you’ll mature and know what to prioritise, and what to let go of.