Man Who Made Daughter Kneel In IKEA Car Park

You might have seen this viral video of a father punishing his daughter in the car park. He forced her to kneel, slapped her face and yelled at her.

While I am not against the physical punishment of children, I am shocked the most liked comments on a Facebook news post of the incident advocated for the punishment. Most attributed it to their own Asian upbringing of being hit mercilessly in the name of discipline. 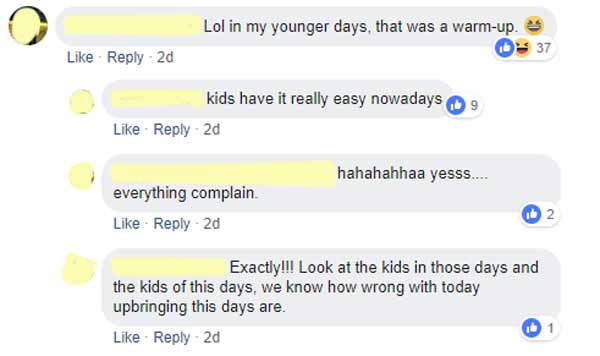 Of course, there was some back and forth on whether he went too far. 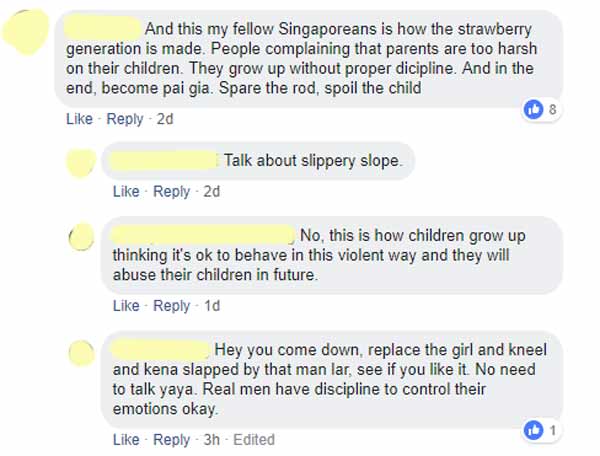 Much research has been done on the effects of physical discipline, one of which is that it predisposes children to be more violent after they grow up. I extract a passage from a long research paper here:

Physical punishment is associated with a range of mental health problems in children, youth and adults, including depression, unhappiness, anxiety, feelings of hopelessness, use of drugs and alcohol, and general psychological maladjustment.

However, even the most extensive research do not amount to much as most parents will stick to their worldviews. Some quickly simplifying it as a Western vs Asian issue: 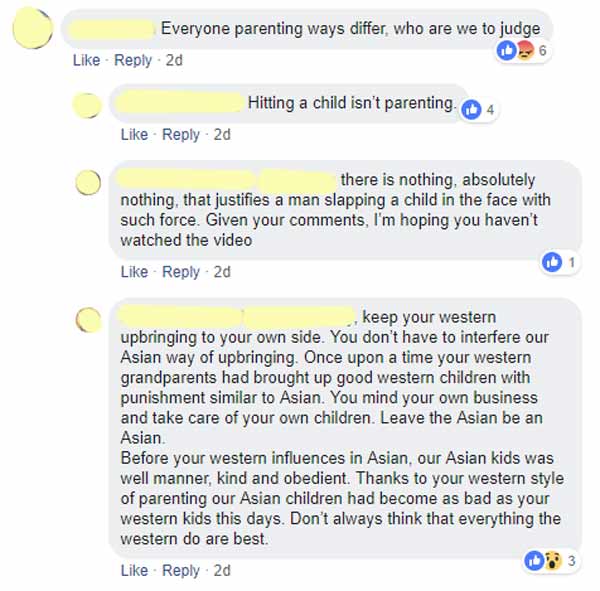 As an Asian person, was I caned while growing up? Yes. Did I like it? No. Did it make me a better person? I don’t know.

Spanking is just the means to an end

I find it strange when people are quick to attribute their upbringing to being spanked or not being spanked. Shouldn’t the focus should be on the lessons and values they learnt growing up instead?

When I wanted to give up, somebody encouraged me. It taught me I could help someone achieve something they thought they couldn’t simply by saying kind words.

When I was down and out, somebody lent me some money to tide through. It taught me to be a generous person because I never know when I needed to depend on others as well.

Spanking can be a useful deterrent to drive home lessons that a child might not learn quickly. But the cane and the slaps don’t teach the lesson. They only teach us what we did wrong and parents still have to reinforce positive behaviour by modelling.

How to discipline effectively

When you see the situations like the above viral video, you should ask:

– What is the parent trying to communicate to the child?
– Did the child learn the lesson?
– Does it make the child a better person?

From the video, I see the man shouting angrily like he completely gone off the rails. Children learn by mimicking adults’ behaviour and his behaviour signals it is okay to use violence when feeling angry.

As a former teacher myself, I can attest that adults who speak calmly but sternly achieve far more than an angry person yelling their head off.

I find Dog Whisperer Caesar Milan’s advice to be especially helpful when speaking to groups of children—one must exude calm and assertive energy, because children respond to disposition and ‘energy’ more than words spoken. Excessive displays of rage can confuse the desired message of correction.

If the child repeated a mistake, parents or educators should bear some responsibility on whether they can communicate the desired behaviour in a way in which the child can understand. The cane could be the last resort if the pep talk doesn’t work.

It makes me wonder what making the child kneel down in public achieves besides some burnt knees? And why did he have to slap her face? Especially for a girl, usually a ruler on the palm is enough to produce tears. Depending on the impact of the slap, a child’s skull is still soft and could sustain irreparable damages.

Certain people got up in arms over MSF’s involvement:

While I don’t want to use a snapshot to judge a situation, the unwarranted kneeling and face-slapping could indicate the girl is subjected to more physical violence and abuse in their private compounds.

We lock up child molestors and take away dogs who are abused by their owners. Shouldn’t this warrant at least an investigation?

Spanking Is Okay But Abuse Is Not

Most children don’t subscribe to pure logic; they test the boundaries of what they can get away with. Most are not as innocent as you think, and emotionally manipulate adults to get what they want.

Spanking a child can be a good way of teaching them boundaries when logic fails. Disciplined children feel loved, because they know somebody is watching out for their well-being.

A cane to the buttock can drive home a point words cannot.

But spank a child to teach them something. In other words, make sure they emerge a more confident and stable person who can make independent decisions based on right values. Not so they can spend years in therapy after a few blows to their brain.

Punish appropriately, educate effectively and put your child’s well-being and needs above your desire to vent your anger.

People have to be licensed to drive a car or operate machinery. Teachers go through years of training to raise children that are not theirs. Is it too much for parents to learn more effective and less potentially damaging ways to raise their child?

Additional reading:
Global Times: I’m fine with spanking, and so are most Chinese parents
The New York Times: China’s Harsh Child Discipline, Through the Lens of Domestic Violence
Next Shark: ‘Asian Parenting’ Can Make Your Kids More Successful, Study Suggests
Next Shark: Why Chinese Parents Use Feather Dusters to Punish Their Kids