I never knew my mother was a teacher until I turned 10 or 11.

I knew she marked school papers till 1.00am and woke up at 5.30am religiously. But, somehow, I only saw her as ‘mum’; the person who cleaned my potty, braided my hair and sent me to school.

Every morning, I watched her pat on her makeup and tell herself “lipstick is what every girl needs to not look like a ghost.” And every night, I watched her prepare lesson plans with English Breakfast tea with Marks & Spencer ginger biscuits on her antique desk.

I eventually learnt she taught English, Literature, and Social Studies. That she met my dad while studying in Canada, came to Singapore, and never left her first job in teaching.

For 30 years, she carried on the same routine, even when she cried herself to sleep from the workload of raising four kids and over 400 students. I never understood why.

She told me never to become a teacher, yet gave up the route to be a principal just so she could teach. By the end of her career, she had taught in four elite schools in Singapore and produced Singapore’s highest O-level English scorers in 2017.

Yet, she never taught me the way I thought teachers should.

When I was 5, mum told me the world wasn’t filled with nice adults. That, if a man touches me uncomfortably on a bus, I should scream, run, kick him in the groin, and alert the driver.

She warned me never to stick to the same routine to avoid paedophiles. So when I walked home from school, I kept a penknife in my pocket because a boy once tailed me home. He asked me where I lived, and I gave him the wrong address.

She told me not to scream “Mummy!” like how “stupid people do in movies” if I lost her in a shopping mall. “Because everyone’s a ‘mummy’. Shout my name instead.”

Mum never scolded me for failing. But when I was 11, she screamed at me for cheating in a Chinese spelling test. “No matter what, you do not ever cheat! At this rate, even a neighbourhood secondary school won’t want you!”

She told me it was important to study, but more important to enjoy learning. But I did not understand her emphasis on Mandarin when she spoke none of it. Or the importance of an ‘A’ in English when she played no part in helping me achieve it.

I resented her each time she compared my grades with her top students’. So, out of spite, feisty me walked into a secondary school of my choice, arranged an interview, and clinched a spot for a direct admission.

But, I learnt it wasn’t the grades she cared about; it was the privileges that came along with those grades. Privileges like attending forensic classes, having Macbooks for school computers, better teachers and sports coaches, because better schools could afford them.

Yet, it’s easy for mid to high-SES Singaporean parents to say grades do not matter when they can sponsor their child’s Australian visa or rope them into a family business. They do not realise choosing not to focus on education is a privilege in itself.

And I learnt that privilege was not mine to keep when I saw mum buy food for kids who could only afford cup noodles for lunch. I learnt power was not to be abused when she spoke kindly to waiters and cleaners.

When I was 13, I learnt what women were expected to be.

She told me to moisturise, use sunscreen, and not “rub my face so hard that I get wrinkles and prematurely age like Caucasian women after pregnancy”.

She said young girls want to look pretty, but Asian women want to look young. So, I had to look after my skin because any plain Jane in school “could become plastic surgeons or doctors and afford expensive beauty treatments to look good.”

I learnt that a woman was privileged if she was pretty, as long as she wasn’t too sexy, and not too dumb. “If you are pretty and smart, you just have to work even harder and cover up more for people to take you seriously. Just don’t be an ugly girl inside and out.”

I still have to remind her turtlenecks are unacceptable in Singapore’s weather. 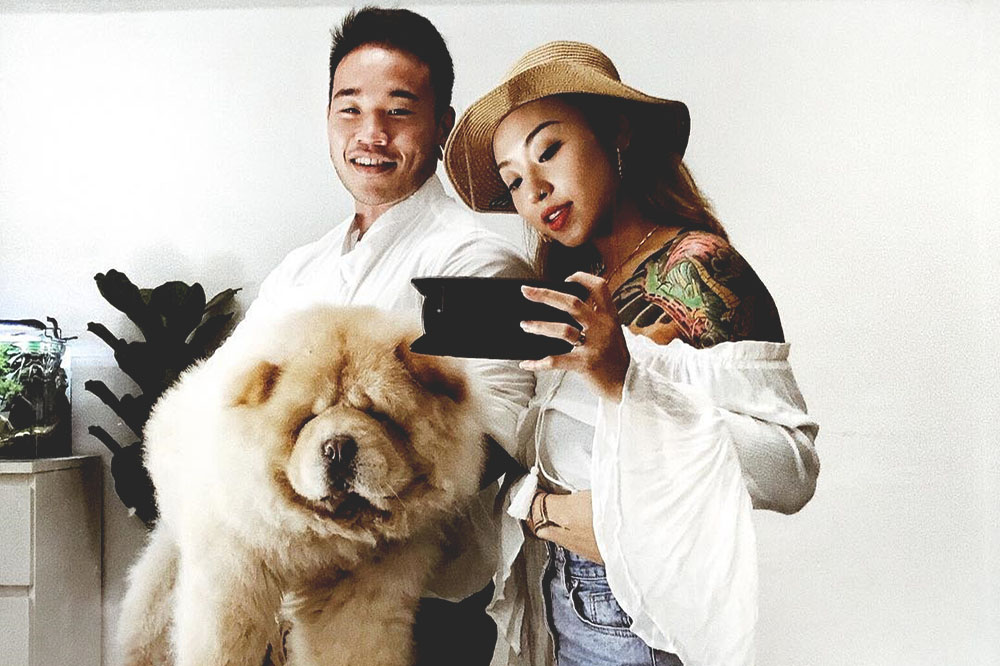 Pictured: with my mum’s precious ‘grandchild’ (our dog).

Then, I turned 16. She bailed me out of the police station once.

I was forced to attend school counselling because my teachers insisted I had “something wrong” because I “hung out with friends who smoked cigarettes and had tattoos”. I wasn’t a “good Christian girl” the school expected me to be.

A discipline master screamed at me because I broke the school rule of not braiding my ponytail, so I had to write a detention letter. My A-Math teacher told me to drop the subject because my failure would affect the school’s ranking (and possibly his promotion).

During my O-level year, I asked her for help with Pure Literature. But, she dumped a blue ring folder with exam papers and said, “Here it is. Do it yourself.”

That year, I scored an A1 despite my school’s aggregate of C5. When my mother called my principal to ask why they did not write me a proper testimonial, the school replied, “Because your daughter’s hair was too long.”

She did not assert herself or tell anyone of her profession. She simply hung up the phone and quietly said, “You do not need someone else’s approval for your own success. Remember this.”

That’s when I learnt that respect and self-love weren’t things to ask for; they were things you give yourself.

When I was 18, mum told me that feelings weren’t the most important factor in a relationship; money, love, and loyalty are equally important.

She said if I wanted to marry rich, I had to be prepared to share him. But, both poor and rich men could cheat, so I had to pick.

She said to look for a capable, proactive husband; someone with shared interests; who enjoys the same films, food, and places to visit. If not, it was better I dated none at all.

But, most importantly, she told me to first become the woman I would date; to look at my own flaws.

When my sister’s ex-fiancé of 8 years threatened to beat her, mum told him, “I did not raise my daughter for her to get abused by a man.”

So, I walked out of my own abusive relationship and apologised to my ex for causing him pain. A year later, I fell in love with my ‘ridiculously nice but undateable’ best friend.

My mother never taught me the way I thought she should. But because I was never raised to believe I was special, I worked harder.

She told me there was no point scoring the highest if you’re rotten inside. She noticed more kids these days crumbling with anxiety; the higher they go, the harder they fall. The only barometer of success is on their report card, pit against someone else’s.

She tells me a teaching career in Singapore was better in the 80s and 90s, with “fewer meetings and admin crap”. Back then, kids were less afraid to make mistakes, and parents were less thankless.

And that more scholarships are given to poor local students, instead of foreign scholars that come from affluent families and only see Singapore as a stepping stone.

She thinks kids these days need to clean up the school like how students did so in the past; wash toilets and pick up litter.

And if ministers can be highly paid, the country should afford to recruit more teachers so class sizes can be smaller and kids will get more individual attention.

She also understands she is only one person, unable to change the system overnight.

But, my mum’s 30-year sacrifice was not to teach every child to accept how the world works.

She wanted us to realise we have to learn the rules before we break them, and eventually make our own.