But to maintain a lavish lifestyle in Singapore, some girls look for older men (Sugar Daddies) who are willing to finance their spending habits.

On the surface, the Sugar Daddy community seems hushed—well, you won’t hear people shouting from their rooftops about having one. But with Google, pursuing a Sugar Daddy in Singapore is a lot easier than expected.

Most of the time, these Daddies are older men seeking attractive company without strings attached for a period of time. In return for the girl’s companionship and sexual favours, they’ll pay for her bills and travel expenses.

To some people, this lifestyle can be seen as prostitution or glorified sex work. But to others, a Sugar arrangement is seen as a more consensual relationship with a monetary agreement that’s similar to how husbands give allowances to wives.

Brandon Wade, CEO of SeekingArrangement, explained, “A prostitute’s transaction with a customer is linear and non-emotional, while a Sugar Daddy and Baby relationship resembles a typical boyfriend-girlfriend relationship but with an added financial incentive.”

Nonetheless, there seems to be a fine line between a want and a need for women who seek out Sugar Daddies.

On SeekingArrangement, there’s even a “University” section for students who want to avoid debt—44% of the site’s Sugar Babies are enrolled in a university.

Searchin’ for Sugar Daddies in Singapore

The first platform I visited was Locanto.

Among several NSFW ads, I clicked on a post titled “Immediate Meetup: Sugar Baby Required” and found a long description about getting paid S$15.00 to watch a stranger jack-off. Now, that felt like prostitution.

Most of the other listings included one-liner descriptions and no pictures. 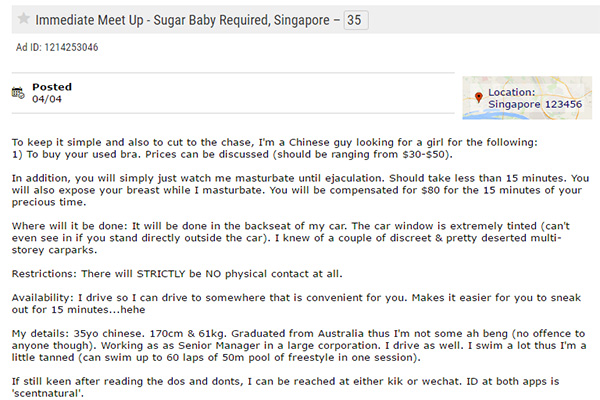 The second site I joined was SugarDaddySingapore.

Although some profiles had pictures and descriptions, I still felt a little uneasy. Maybe it was due to the poor website quality or that I got shaded from a Sugar Daddy when I took more than a couple of hours to respond:

Such messages gave the impression that these men felt a sense of entitlement and ownership over me. But like most dating sites, it’s almost expected that you’re going to run into some duds.

After trying out several dating platforms, SeekingArrangement seemed the most legit. It felt like any run-of-the-mill dating site with ‘About Me’ and ‘What I’m Looking For’ sections. Basic information included height, body type, and education level.

But unlike most dating websites, they provided me with the Sugar Daddy’s Net Worth, Annual Income and Lifestyle Budget.

Within four days, I was approached by 19 potential Sugar Daddies. Most of them were Singaporeans in their 30s, while others were expats who travel in and out of Singapore for work. The oldest man I spoke to was 50 years old. 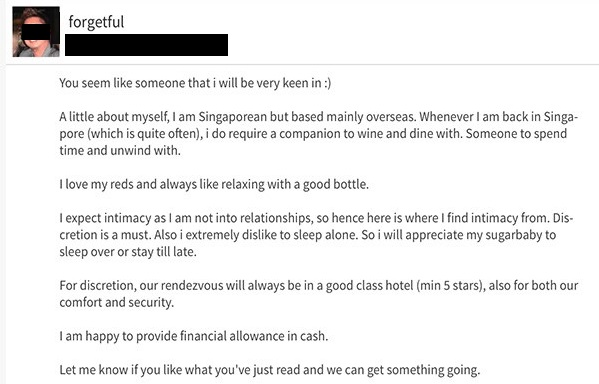 The messages I received ranged from a casual “hey there” to paragraphs about what exactly they were looking for.

They were also very persistent and upfront about their expectations. However, it was hard to ignore how many of them had families. In fact, 40% of over 1,600 SeekingArrangement Daddies are married.

Among those who were single, many claimed to be busy people who don’t have time for a relationship due to work commitments.

According to a 2017 study by NUS Business School, women executives in Singapore earn on average 46% less than men.

Choosing to be a Sugar Baby can be seen as an anti-feminist movement, but SeekingArrangement argues that because young women are already at a disadvantage with pay raise, having a Sugar Daddy can be justified.

“You’re using what is available to you to get what you want. Men do the same thing, but they get more opportunity because of their privilege. A Sugar Baby’s mentality is an alpha male mentality—they have the ambition, they’re dreaming for more,” says a PR representative of SeekingArrangement.

Vacations, cash allowances, career advice and fancy dinners in exchange for my companionship once or twice a week—it’s easy to see how the lifestyle can be tempting.

Being financially stable is important to feel secure, but a relationship is supposed to empower women physically and emotionally as well. It may be nice to be pampered and showered with gifts, but is putting a price on your affection worth it in the long run?

While the majority may think being a Sugar Baby is wrong, Sugar dating platforms are for people who know what they seek in a relationship. So while it may not fulfil everybody’s interests, it may be what somebody else needs.