Feminist movements in Singapore have achieved considerable milestones over the past 50 years. We’re blessed with good education for girls, largely equal pay in the workforce and autonomy over basic rights such as birth control.

However, I believe that modern day feminism has been marred by radical feminists and their flawed perception of feminism, which makes it more difficult to openly discuss the F word.

Misconstrued interpretation of what feminism means

In other parts of the world, girls march naked in public at feminist movements such as #slutwalks to protest against victim-blaming in rape culture. But I on the other hand, believe that my modesty empowers me. Yes, even with my hijab on in our 30-degrees weather. I don’t feel the need to bare my skin to make men see me as their equal. It’s my way of saying hey, I’m a woman who commands your respect not because of how I look but because of who I am.

A large number of millennial girls believe that feminism refers to the elevation of women’s status; sometimes even thinking that women should be better than men. That’s not what feminism is at all! But why then do so many subscribe to the wrong interpretation of feminism?

Back in Junior College, I had been ignorant and insensitive when I proudly proclaimed “All Men Are Useless” due to my experience with some incompetent boys. Now I know that I had misinterpreted what feminism meant and the way I had behaved was not appropriate.

My new and improved definition of feminism is that it’s a belief in equality for people of all genders in terms of opportunities and respect. It doesn’t mean that women are placed above men or that men’s issues are not as important. Which brings me onto my next point about National Service (NS). 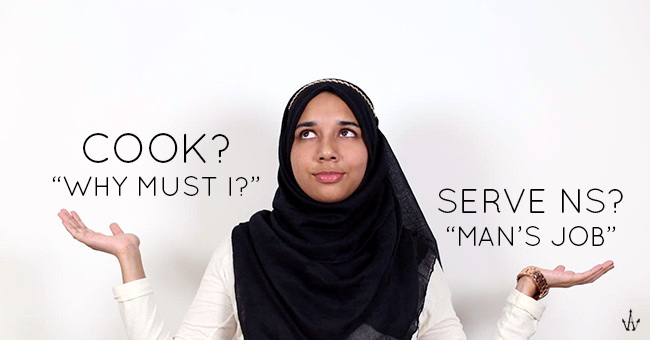 Feminists these days actively demand for equality, but when National Service (NS) is brought up, they think twice.

All Singaporean men are required by law to serve the nation for two years while women don’t have to. Clearly, fairness isn’t in the picture. Ask any proud feminist if she’d be willing to undergo NS, and she might pull a “genetics” card. Men are biologically more muscular so bopian, they should be the ones to serve, right? But when it comes to cooking, cleaning, sewing, no modern woman should be subjected to traditional roles, right? #DoubleStandards

In a hypothetical war situation, why should our nation only depend on men for its security? Are we all not equal citizens of our country?

We shouldn’t try to blindly mimic what men can do, but rather fill in equally important roles in other fields. Why can’t we serve in other ways such as in clerical work or first aid? For those who are physically able to undertake more taxing positions, they should be allowed to do so. #FreedomOfChoice yo.

Another global issue I disagree with is how men are discriminated with regards to being victims of sexual assault and the social stigma around it. Such a scenario is not unheard of and the fact that our legal system also propagates this idea of men being only the assaulters and not the victims is damaging.

In our Penal Code Section 375(1), rape is defined as “Any man who penetrates the vagina of a woman with his penis”. This immediately victimises women and places the blame on men. Rape is possible the other way around and it’s important to destigmatize this issue in order to provide the necessary support to victims of all sexualities.

Existing organisations are rather inaccessible to the younger generation

Yes, there are a few notable organisations dedicated to the feminist cause, but fo realz tho, getting involved in such organisations don’t seem appealing to girls my age. I find that millennials would rather be “Keyboard Warriors” who tirelessly argue with people on social media platforms than actively make a difference.

Many of us are hesitant to openly declare ourselves as feminists, either because of the bad rep it has or simply because we don’t feel an affinity to the existing organisations.

Moreover, some of these organisations such as AWARE don’t even allow or encourage men to join as members. My question to such organisations is: if you yourself are imposing such restrictions and creating divisiveness, how can you expect a more inclusive society with gender equality? It’s like killing people to teach others that killing is wrong. Makes sense? No.

As feminists, we should be more open minded and not adopt a moral high ground when speaking with those we don’t necessarily agree with.

I myself struggled with this a lot. I thought that people were either feminists who believed in equality for all, or horrible humans if they didn’t. (jk…)

I can get very passionate about my argument when the opposing view may not sound logical to me. But we can’t fight fire with fire. We’d be more productive if we focus on what women can do that men don’t usually excel in, instead of thinking we should do everything men do.

Stand up for equality

As advocates for change, we need to be patient and look at the bigger picture. We must consider this: if more people are being put off by feminists’ vehemence in insisting on our POV, then we are not achieving much.

I admit that I haven’t done much to actively contribute to the cause but perhaps this is my first step forward. What’s your first step going to be?

It’s not going to be easy and neither is it gonna happen overnight. But with honest intentions, perseverance and an open heart and mind, we’ll make tomorrow better than today. Mic drop.