It’s 2017 and the feminism wave is bigger than ever with celebrities, fashion designers and folks like you and I. But with such broad ideologies, some of us have misconstrued what feminism really is.

Although feminism is widely defined as men and women having equal rights, some see feminism as females overpowering the male race. Now…where did we get that idea? Here are a few examples of feminazis who have subverted the equality that feminists aim to promote. People haven’t just been checking out Gal Gadot in all her Wonder Woman-esque glory—they’ve also been surveying her pits. Apparently, some feminists have been questioning the iconic superhero’s clean shaven armpits. Why isn’t she parading her pits around in all its hairy, female glory?

There was even a poll by a verified feminist Twitter account who raised the question, “If Wonder Woman was a feminist, would she have armpit hair?”, and people took to Twitter to highlight the pointlessness of this debate. No surprise, 40% agreed that Gal’s armpits shouldn’t be an issue.

Shaven or not, there’s no need to hinge how “feminist” someone is based on her grooming choices. Watch Wonder Woman in action and you’ll see she can pick up much more than a razor—and that’s what matters. 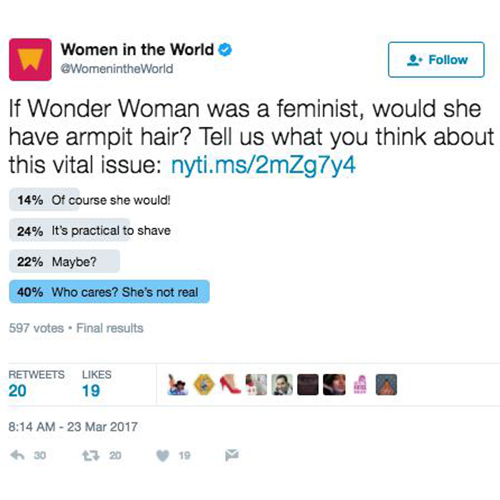 Size zero girls often get comments about how they are not “real women” and some even get ridiculed with scathing statements such as, “Men are dogs if they like your bones”.

If “real” women have curves, does that mean that every other girl is a mere illusion that doesn’t exist in this realm? 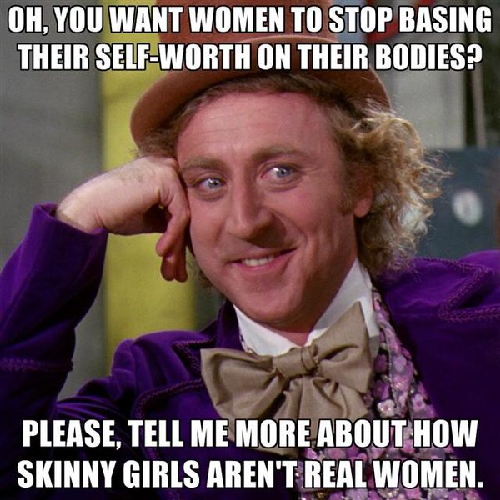 3. “You wear makeup? You’re not being yourself.”

You’ve heard of slut and body shaming but some extreme feminists like to shame girls for their love of makeup. They’ve defined makeup as a mask that conceals the “real” you… even if you’re born a diehard makeup junkie like me.

There’s also the classic debate of brains vs beauty. Implying that girls can’t pursue both beauty and intellect limits them more than it liberates them—I mean look at Amal Clooney, she looks flawless and with a brain to boot. 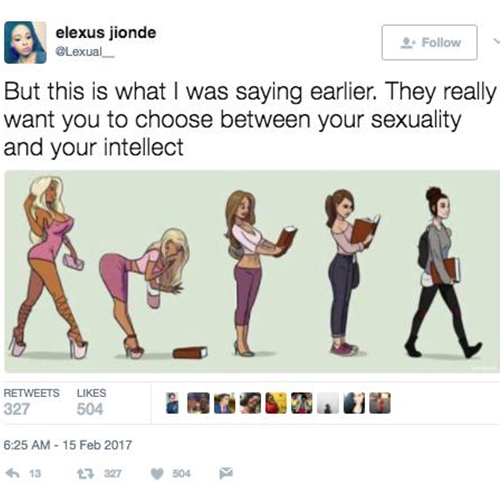 In some parts of the world, girls march naked in public at feminist movements such as #slutwalks to protest against victim-blaming in rape culture. But to others, modesty empowers them. It boils down to one consensus: choice.

But till today, not all choices are accepted equally—not even in Hollywood. Take Kim Kardashian’s nude photos for example. While some netizens celebrated her confidence, others slut-shamed her. 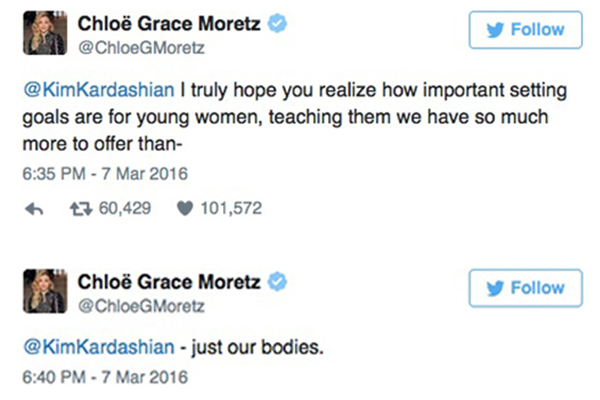 One #triggered feminist was actress Chloe Moretz, who responded with a tweet: “I truly hope you realise how important setting goals are for young women, teaching them we have so much more to offer than just our bodies.”

It’s true that character, drive and intelligence are important. But on the flip side, so is body-positivity.

5. Men should always pay for your meals

Don’t get me wrong, I’m all for chivalry, but times are different. In today’s world of equals, acts of chivalry should be carried out regardless of gender. Women also should hold doors open for men—it’s just manners.

And as independent, working women, if your man wants to pay for you, that’s great! But let’s not attack men if they don’t as we’re capable of going dutch too.

6. I’m on my period, I have the right to throw a bitch fit

Feminists have had a lot to say about ‘shark week’. While some accept their flow as a natural way of life, others use it as an excuse to be…excused. Phrases like, “I’m having my period and can legally kill you” just make women sound like they’re unable to take charge of their own emotions.

If we bash men for chalking our emotions up to “PMS”, we should refrain from treating it like a free pass to act out. Period or not, we can go and get things done!

It’s really upsetting how feminism is seen as a movement against men when it’s simply about equal rights for women. Some, however, have taken it the wrong way by generalising males in a negative light. 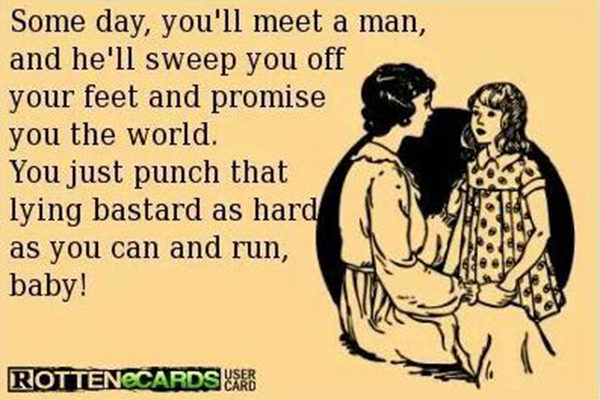 It’s not rare to see men-hating quotes circulating the internet and our WhatsApp chats. But is this man-hate really necessary? After all, an eye for an eye makes the world go blind. Hating men won’t bring us any closer to our goal.

It’s a fact that both men and women have biological advantages and disadvantages, but being on an equal ground means having equal opportunities not subject to gender stereotypes.

8. You have to break gender stereotypes to be a feminist

During the fight for equal rights, it’s also wrong to assume that women who enjoy traditional female roles hinder the cause. It’s not about whether you wear pants or a miniskirt, it’s about choice.

It shouldn’t matter if you’re breaking barriers in a male-dominated industry or fixing the dinner for your family at home, you should be able to do what makes you happy, and not have to apologise for it.

Nobody’s perfect and we’ve all probably had some hits and misses in our attempts to support feminism. The important thing is that we respect each other—regardless of gender.

A sucker for lame jokes, Divyata's laughter is often heard from miles away. Her consequent sore throats are very common so you best believe that Divyata has mastered the most sure-fire sore throat remedies.