20-20 target for women in the workplace

In a Straits Times article published last week, the Minister of Culture, Community, and Youth, Ms. Grace Fu, joined the PAP Women’s Wing and BoardAgender, a Singapore Council of Women’s Organisations (SCWO) initiatives, to advocate a quota of 20% of female directors to be on boards by the year 2020.

Here’s what she said: 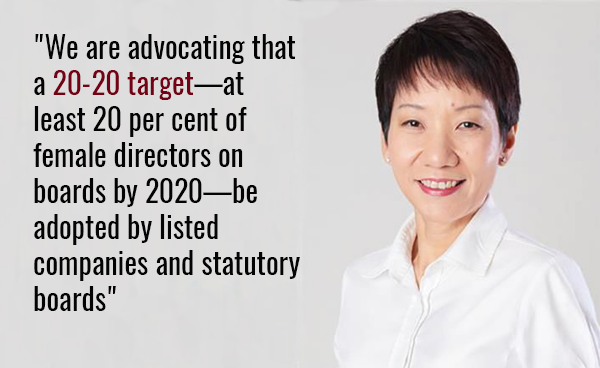 I was initially quite pleased with the news. Due to ingrained patriarchal norms, women are still largely treated as inferior to men, particularly in the workplace all around the world. In a recent article that went viral, two co-workers of opposite genders, Martin and Nicole, switched email signatures by accident and documented the discrimination against women in the workplace today.

Martin being Nicole’s direct supervisor, shared an email inbox with his subordinate. During the initial mix-up where Martin accidentally used Nicole’s email signature, he noticed how a client was “rude, dismissive, and ignoring questions”. When he switched back to his own, the client immediately became a “model client”. Yet nothing had changed in his approach—he had merely switched from being “Nicole” to “Martin”.

This prompted him to try the email signature switch experiment for a week. Nicole went on to have the most productive week of her career at the company, while Martin was faced with roadblocks in every direction—”I was in hell”.

While it’s clear that the intentions behind this move seem pure, the execution brings up many questions and seems quite outdated: why is it that after all these years, efforts to override sexism in the workplace is still so ineffective?

Implementing a target waves a defeated, sexist white flag that does not encourage society, let alone members of the workplace, to move forward and away from outdated, if not conditioned, mindsets. While this target is spun in a positive light to give deserving women opportunity, it still risks introducing under-qualified members when that minimum number is not met by merit.

Is it even going to work?

How will male colleagues perceive their female superiors if they know they are only where they are due to affirmative action? Will it solve the discrepancy in respect levels afforded to the different genders?

The male contingent has their own battles to fight to climb up the ladder, and any government-sanctioned shortcuts being afforded to the other gender is only going to generate ill-will. This policy will only diminish the accomplishments of hardworking women, foster unhealthy office politics and drive a divide between employees of the opposite sex.

Even when the Malaysian government tried to implement a plan to raise the Malay’s economic share from 2.4% to 30%, it resulted in the creation of “Ali Baba”—when a Malay company subcontracts a government contract to a Non-Malay company for profit.

Although the “20-20 target” differs in substantial ways, the advocates for this target seem to believe that quotas are needed to introduce “equality” in the workplace, much like the Malaysian government did.

Some netizens agreed that this target demoralises women, and can be seen as an act of discrimination. By reducing women’s worth to that of their gender, companies won’t feel the need to hire beyond the quota, leading to further discrimination in the workplace.

Granted, women only hold 9.7% of seats in SGX listed companies as of now. However, as the minister herself noted, it’s up 0.6% from 9.1% last year, which is more than a 15% increase in just one year. Although implementing the “20-20 target” would spur a faster increase, it would come at a price of possibly compromising quality in favour of statistics.

A deserving title regardless of gender

Although Ms. Grace Fu insists that “this is not about giving preferential treatment to a specific gender”, it’s plain to see that the objective is largely an affirmative policy that will bring about more harm than good in the long run.

At the end of the day, these decisions should be up to meritocracy, not the government. Hard work and those who display qualities of a given title should be what ensures a deserving position, regardless of gender. We need to respect the original goals that feminism has been fighting for—equal rights. The main issue that all these re-occurring issues bring to light is the attitude society has towards respecting women in all aspects, including the corporate field.

To break out of the inequality posed against the female gender, all we can do as supporters is to respect and be a catalyst for the already occurring progressive change by focusing on educating kids about sexism from an early age.