With a first world status and relatively safe streets, it’s hard to picture Singapore being associated with modern slavery.

But in the murky underworld, it doesn’t just exist—it thrives. Singapore is a prime destination country for human trafficking to occur.

At the forefront of its prevention is Mrinalini Venkatachalam, Head of Public Awareness and Youth Initiatives at UN Women Singapore. 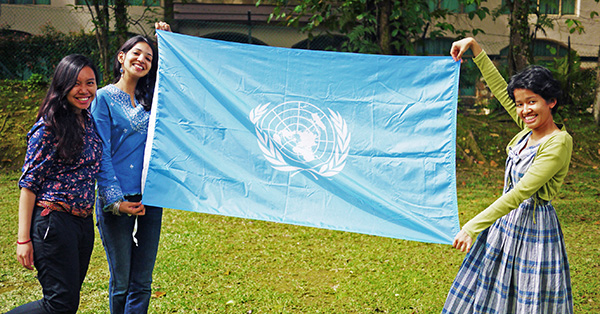 “My team and I aim to engage the public, corporations and government agencies in Singapore on addressing and eradicating issues such as migrant labour, domestic abuse and human trafficking of women and children”, Mrinalini says.

Whether running a camp at a school, packing materials in a dingy storage or attending receptions hosted by embassy partners, Mrinalini has one aim in mind—to spread awareness on often neglected women’s issues.

However, she says the biggest challenge of her job isn’t overcoming the lack of awareness of gender inequality and the extent to which it is embedded in cultures and traditions, but rather overcoming the general sense of apathy from individuals.

“The refrain ‘this does not affect me personally, therefore I do not care’ is very common,” Mrinalini says.

“We do not come face to face with issues such as poverty on the same level as some developing nations. But this does not detract from the seriousness of the issues—ignoring the problem does not make it go away.”

“But if we can change the mindsets of the next generation to be intolerant of these issues, I believe we can get rid of these situations faster than the current rate of progress.”

On her choice of career

So how did she decide to be a champion of women’s rights?

While growing up an only child in Bangalore, Mrinalini felt she was brought up privileged, even though her parents weren’t well-to-do.

“In India, gender discrimination is evident in many spheres,” Mrinalini explains. “My parents gave me every opportunity to achieve my potential, and I was never made to feel inferior for being a girl.”

“It irked me that other women did not enjoy the same privilege and that’s why I chose to work in this field.”

For nine years, she worked in the nonprofit sector, with her work ranging from helping the disabled gain access and equal rights, through public interfaces and sign language training, to generating awareness on Solid Waste Management through radio programmes and awareness camps at local schools and slums in India.

In 2009, Mrinalini got married and moved to Singapore. She was keen to “enact change in the field of women’s rights” and began working with the Singapore Committee for UN Women.

Encouragingly, young Singaporeans are increasingly taking to social media websites like Facebook to air their views and raise awareness.

“Over the past seven years, I’ve seen a growing interest amongst our youth to step up and take the initiative to create social change.”

“Whenever students walk up to me after my speech to tell me that they want to initiate a project to change the gender imbalance, I feel like I’ve won a million dollars!” 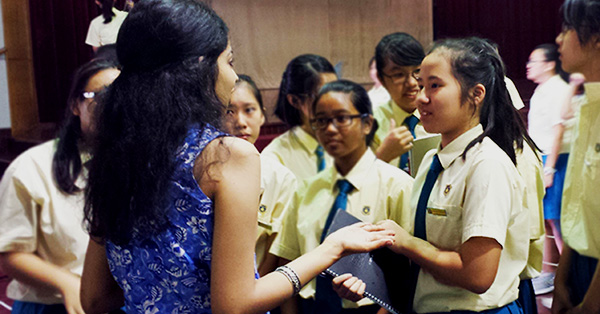 On feminism and motherhood

Despite the negative press about feminism, Mrinalini remains unabashedly proud of being a feminist. “Feminism is about equal access, equal opportunities and equal rights for everyone, irrespective of your gender.”

“It has nothing to do with whether you work full time, part time or choose to follow traditional gender roles. The key word is ‘choice’ and whether you have the opportunity to exercise it.”

Her own principles have influenced her choice to remain a career woman after giving birth to her daughter in 2015.

“I think it’s good for a child to see both his or her parents engaged with something they’re passionate about. Whether it’s a job, a hobby or volunteer work somewhere, it inculcates strength of conviction and a sense of purpose in them.”

Yet, she admits balancing work and motherhood isn’t easy. “There’s a lot of pressure on the women to be the perfect mother and perfect career woman.”

At the end of the day, Mrinalini chooses to continue working because she wants to change the dynamic where anyone is made to feel less worthy because of their gender.

“I dream of the day where my job is no longer required because gender equality is the norm rather than the exception, and I hope my daughter can grow up in a world where conversations about gender equality and gender diversity are no longer necessary.”

Though the fight against human trafficking and modern slavery does seem insurmountable, Mrinalini promises she’ll never give up.

Keeping Up With UN Women’s Work

By looking into the hiring practices and supply chains within our homes, communities, hotels and restaurants, Singaporeans can help by reporting potential human trafficking victims.

“You can be the change you want to see. Believe in your own potential to make your community and your country a safer place for women and girls”, Mrinalini says.

To keep yourself updated with the various talks and initiatives by UN Women, check out their Facebook page and website.