Getting Kicked Out Of A Clique

Romantic break-ups are the subject of countless songs, books and movies. Friendship break-ups, however, are rarely addressed in popular culture. Truth is, the end of a friendship can hurt as much as the end of a romantic relationship. I learned this first-hand, when I was kicked out of a clique.

As a sociable person who enjoys meeting new people, I’ve never had problems making friends. In my first year of junior college (JC), I clicked easily with a group of classmates. For months, we were inseparable. But in the second year, the friendship came to an end.

It took a long time but eventually, I was able to get over my emotional trauma. I realised that friendship break-ups are normal and that I shouldn’t beat myself up over it. And while you might not find yourself in the same situation, the lessons of appreciating both your self-worth, and the people around you, can apply to anyone.

1. Having differences with someone doesn’t mean you’re at fault

Whether it’s romantic or platonic, when you click well with someone, it’s easy to get swept up in a new relationship. My group of friends and I were so close that people would call us “squad goals”. Even though it was only our first year of knowing each other, riding on the high of being able to vibe easily felt almost intoxicating.

In JC2, I fell out with one person who didn’t see eye to eye with me on many issues. Our previously perfectly synchronised personalities suddenly seemed to clash in every way possible. From there, it was the starting point of drifting away from the rest. Eventually, it led to me being kicked out of the clique.

Most of the time, you think that someone is right for you in the initial stages of a relationship because of how easily your vibes match each other. But eventually, the honeymoon period has to come to an end. We are all different, and you should not change yourself solely for the sake of maintaining a relationship.

While it might be hard to accept the end of a friendship, there’s no point dwelling on the rejection if they cannot accept the things that make you, you.

2. Acknowledge your pain but don’t let it consume you

When I was first kicked out of the clique, I hit one of the lowest points in my life. I constantly blamed myself and my personality for the loss of a friendship that had seemed perfect at the start. I indulged in self-pity, neglecting my studies and pushing people away. I spent a lot of time sitting alone with my thoughts, convinced that I was not good enough.

It’s important to acknowledge the pain from losing your friends and allowing yourself time to heal. But not to the point where you lose yourself. It’s easy to say this now, but it was extremely hard for me to pull myself up when I was down. Letting my emotions consume me resulted in a huge blow to my self-confidence.

It was only after I visited my school counsellor that I managed to find some closure. While it might be tempting to deal with everything by yourself, seek help when it gets too much for you to handle. A listening ear from a family member, a counsellor or therapist can push you to the right direction on how to handle your sorrow.

3. Your self-worth isn’t defined by others

After being kicked out of the clique, I became afraid of sitting by myself in school. I felt self-conscious of other people judging me for having no friends and constantly worried that there were rumours being spread about me. I found myself cowering into corners and avoiding as much attention as possible. Even until now, the fear and trauma of being alone continues to haunt me on most days. 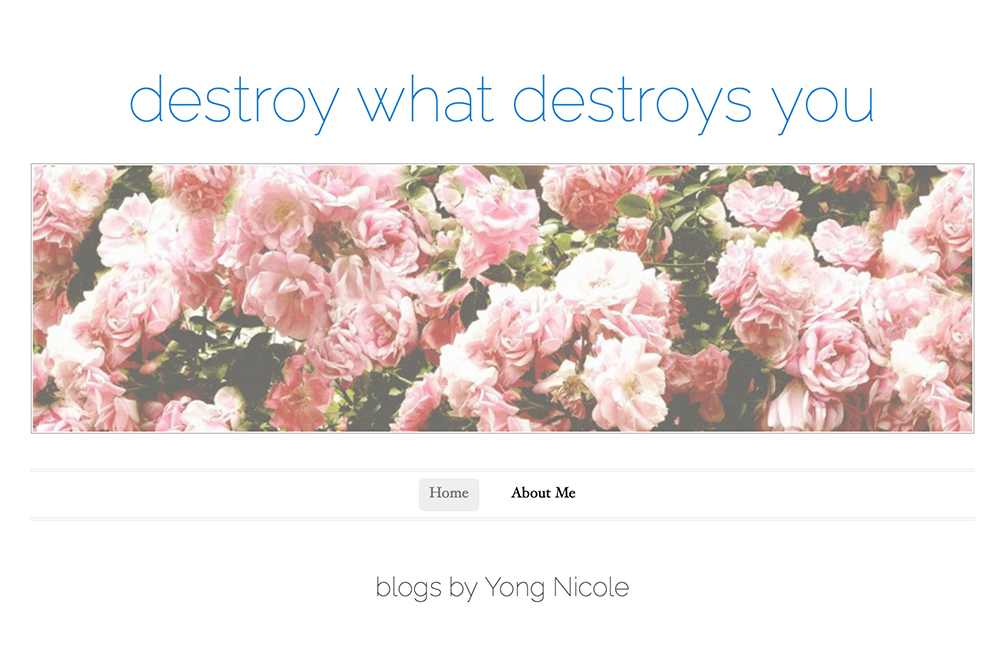 My blog to pen down my thoughts into short stories

It was during this time that I turned to creative writing as a way to deal with my emotions. I set up a blog titled “destroy what destroys you” with the belief that writing short stories and releasing them online is an act of letting go of negativity.

Putting down the thoughts that I’d kept inside me into words felt like I was getting rid of the pain. Doing something for myself gave me a sense of pride too. Being alone also allowed time for self-reflection, allowing me to become my own person apart from my old clique. It hit me that negative perceptions of myself rose because I thought the lack of my friend’s validations defined my worth.

When you lose your friends, you’ll suddenly realise how much time you actually spent with them in a day. I found myself unsure of what to do, almost as if my identity and sense of self were tied to them. However, picking up a hobby helped as a form of distraction. Make use of the time to discover things you like to do independently and it can make you feel like yourself again.

4. Start your journey of self-love by accepting help

Getting caught up in the moment can make you forget about the bigger picture. I was so consumed by my own feelings, I failed to realise that I had people from other phases of life to support me. I refused to tell other people what I was going through because I didn’t think I deserved their support. I also didn’t understand why these people wanted to help me and felt indebted to them.

It’s important to remember that you’re never really alone when times are rough. Accepting help from others is a step to believing in yourself again. The breaking point was when I realised I was hurting myself even further with these negative thoughts. 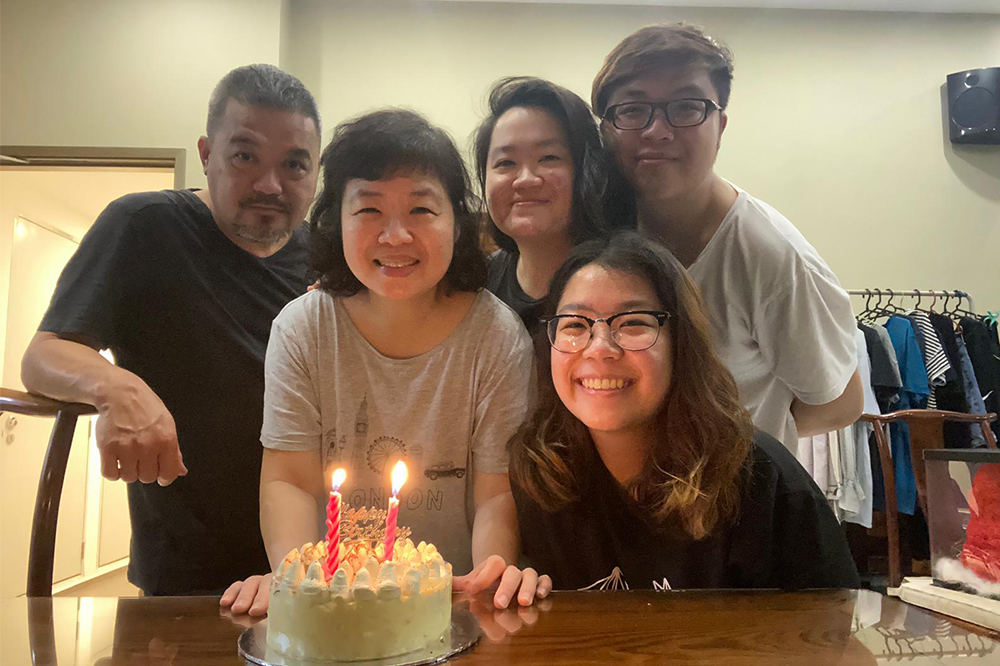 Maintaining a close relationship with my family till today

While I felt like I still couldn’t face my loved ones yet, I reached out to my school counsellor first. This helped me to slowly open up to other people, especially my family members who have been my biggest pillars of support since I was young. Learning to love yourself again also means accepting love from others without feeling undeserved.

5. Opening yourself up to new people can make you feel vulnerable 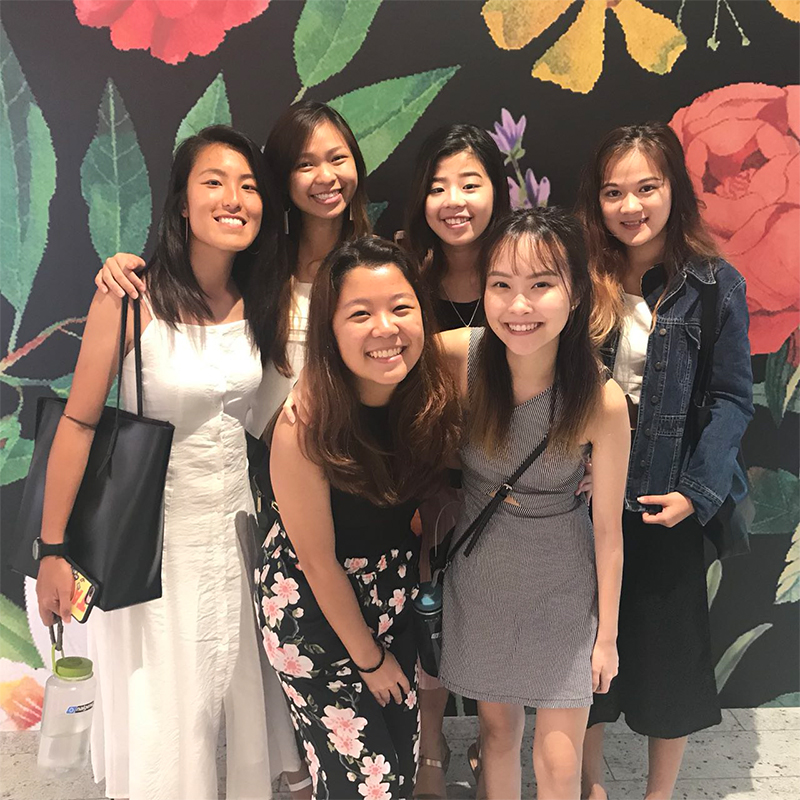 Finding a new group of friends to trust again

As I fell out with my clique towards the end of JC, another group of girls from my class took me in. In my poor state, I assumed that they just pitied me for being alone or wanted to know what kind of “drama” had happened. Instead, they didn’t ask for any details and warmly included me in their lives without hesitation.

Even after we graduated, they continued to check up on me. Today, they are my closest friends. I’ll always be grateful to them, as well as myself, for taking that leap of faith and trusting people again.

Being with them has also aided me in my journey of self-acceptance. They taught me to slowly accept myself again, reminding me that I am worthy and deserving of love. Just because my previous group of friends didn’t accept me doesn’t mean that no one else ever will.

I’ve learnt to appreciate the people around me who will provide support, instead of focusing on the people who didn’t. Meeting new people again might be scary, but taking the first step to try is an achievement in itself. It also helps to see it as a fresh start, as if you’re giving yourself another chance.

6. Finding the confidence to be yourself again takes time 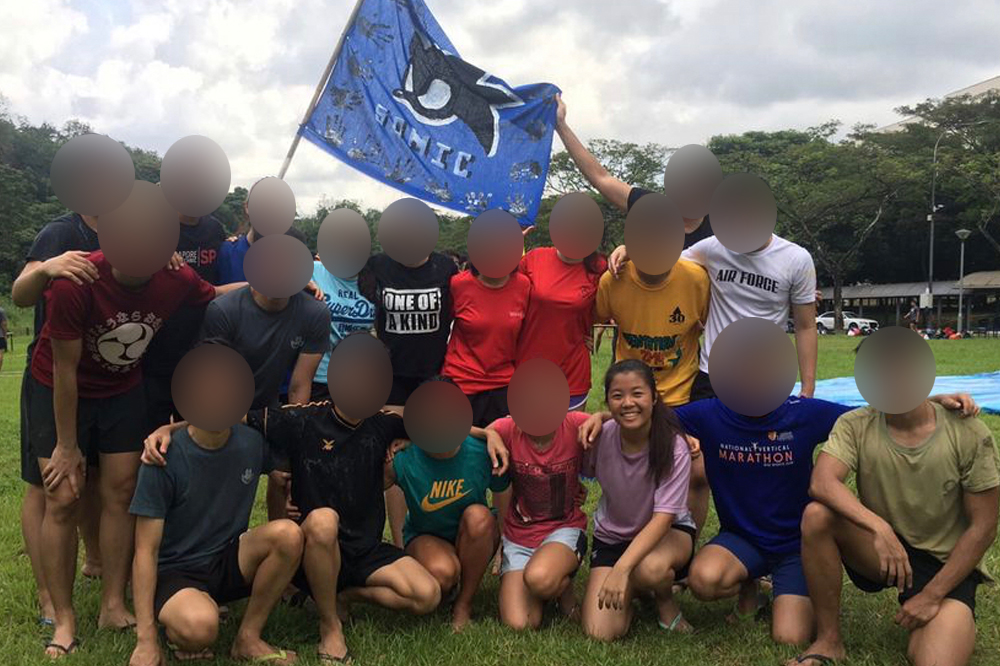 Attending an orientation programme in university

Even after going into university and maintaining contact with my friends, I constantly found myself being afraid of getting too attached to people. Due to this fear, I tend to give in easily whenever a disagreement with someone rises.

It’s normal to have days where you’re reminded of the past. Finding the confidence and courage to be yourself again, and learning to create and cherish bonds with other people without feeling anxious, takes time. Even with my doubts, I pushed myself to sign up for university orientations. Four years later, I’m happy to say that these were some of the best years of my life because of the people I met.

Take things one step at a time. On days when I don’t feel completely like myself, I take it as a sign to give myself time alone to work through my feelings again. No one else can fully understand you except yourself, so prioritise yourself and understand your needs.

Friends play an important role in different periods of our lives, but they cannot determine our worth. I found the confidence in finally letting go of the negative feelings I harboured towards my old friends. Originally, I couldn’t let go because I kept getting reminded of the good times we spent together and how I had lost it all.

Finding the strength to pick yourself up comes from within you—you cannot expect someone else to do it for you. From learning to love yourself again, to appreciating yourself and all the important people in your life, you’ll be able to let go of negativity with no regrets.

There’s that cliched saying that tough times make you stronger. Getting kicked out of a clique was one of those incidents where a tough time made me become a better person to myself. While I’ve lost contact with everyone in my old clique, I still appreciate our friendship. It made my JC days fun while it lasted. Though it’s sad that we couldn’t remain friends till today, I hope that all of them are still doing well, wherever they are now.