Arguably one of the scariest ideas a child can comprehend besides the boogeyman and no ice cream. Unfortunately, it’s becoming a more frequently used word today. Blame it on the fragile commitment of modern couples indicative of some moral crisis within our generation or on the myth of infinite love.

Here are 16 things kids of divorce will understand.

1. The beginning was traumatic

Although it differs in extent from child to child, every kid of divorce remembers witnessing the whole slow, heartbreaking disintegration of their parents’ relationship. Be it having mum and dad sleep in different rooms, loud arguments at night or kitchen utensils being thrown on the floor as you hid under the covers at night.

2. You used to hate them

Other kids had “normal” families with intimate gatherings and parents who would kiss them goodnight. But yours was seeing mum and dad tear each other apart. Who else to lay the blame on besides your parents when you intentionally screwed up your exam to get their attention? Maybe they split up because of infidelity but you couldn’t humanise them enough at 10 years old because mum and dad were our superhuman role models.

3. The disappearing parent at family occasions

Don’t get me started, it’s like one parent had been perpetually kidnapped. Before the divorce is finalised you’re bombarded with the paparazzi aka relatives.

“Why hasn’t your mother been coming?”

Because dad and mum are getting divorced, but that’d make dinner awkward so don’t ask me that.

“Tell her to come next week for dinner!”

So you become the official spokesperson for your missing parent and an expert liar. Not to mention, we have dual celebrations for the same occasion.

In this phase, you’ll observe your parents try to one-up each other to win you over. Usually, this occurs during the custody battle so you’ll be more likely to choose to stay with that parent. Did dad give you $10? Mum’ll give you $20. If Dad finds out he’ll top it up to $50. Did mum take you to a restaurant? Dad’ll buy the restaurant. In time, you learn how to exploit this and become an expert manipulator, only to realise that material things can’t make up for their physical absence.

5. You start ballin’ at an early age

Needless to say, when your parents try to assuage their guilt by compensating with money, you get mad dollars and become a straight up baller. Mcdonald’s upsized, please.

6. Sometimes you felt like you were in a game of chess

But then again, you might feel like the sudden ‘niceness’ isn’t stemming from love and guilt, but to momentarily entice you towards them. Because when you choose to stay with whichever parent they get paid child support for you. Yes, there’s a price set on you agreed mutually by both parents. Sometimes, you can’t help feeling like a financial pawn in their chess of divorce.

Then comes the big decision, your parents are going to be living separately now. So who’s it gonna be? Usually, it’ll be like choosing between your left and right leg, because if you had a choice you’d want both, together. And it’s almost impossible to make a choice without hurting the other parent’s feelings.

8. You stopped believing their advice

Yes. Coming from the man who used to say “respect your mother/father”, is now calling her a bitch. You really master the art of diplomacy and neutrality as a result of this. Becoming a dual spokesperson for both parents is a common side-effect.

You only ever acknowledged your birth parents as your real parents and you’ll never really accept a step-parent in that case. Step-parents get no respect and stepmothers are evil—or so we thought. But we need to give them a chance eventually because sometimes they do care about us, and we don’t wanna put our real parents in a spot.

10. The struggle is real when packing for two houses 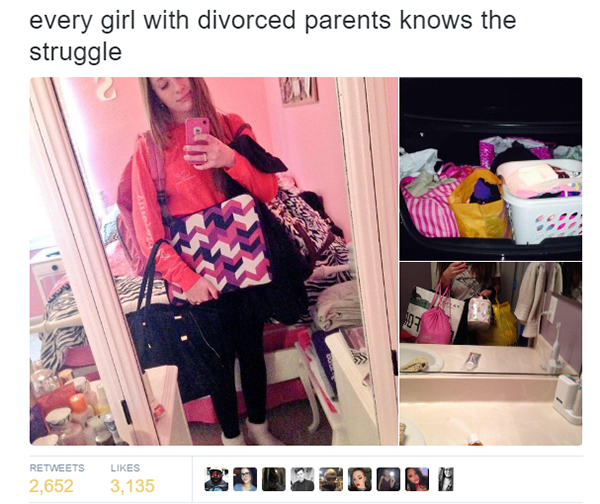 11. Their homes become “safe houses” from the other parent

Fought with mum? Go to dad’s house. Fought with dad? Go to mum’s house. Sneaking out? Tell mum you’re at dad’s and vice versa. That was the perk of having two homes.

12. You only get to see one parent/sibling once a week

Maybe this is one of the worse parts if you’re close to your siblings. You learn to cherish time with them more.

13. People always assume you’re a broken soul with no childhood

Every time someone finds out your parents are divorced, people immediately go start ‘aww’-ing and apologising like a puppy died. It’s completely fallacious to assume children of divorce will definitely spiral into delinquency and go astray. From my personal experience, my teachers accounted my failing of math and sleeping in class to my parents’ divorce…when I was just tired and sucked at math.

14. You become stronger through the hard way

If there’s any stereotype that’s acceptable about children of divorce, is that they’re stronger when it comes to dealing with setbacks. Not all, but most have learnt to handle trials and tribulations. They experience a unique sort of loss that not all kids will understand.

After observing every phase of the shit-show of a marriage your parents had, you know exactly what went wrong and pledge to never do it in your own marriage. You’ll be extra committed to sustaining a happy marriage and family. But sadly, we all know relationships aren’t that simple.

16. But once hate diminishes, you’ll start to understand

At the end of the day, you realise that everyone’s better off with this arrangement. You’ll realise that even though they’re not Mr and Mrs, they’ll still be your mum and dad.

As we grow older, we start to realise that what’s worse than divorce is seeing your parents stick in an unhappy marriage. And no matter what choices they make, we only want them to be happy.

Valerie was supposed to be a rock star in the eighties but by some mistake was born into an Asian society as a milliennial. So, she settles with singing in the shower and takes pride in being able to name any Michael Jackson song by the first beat.