When we encounter relationship problems, the people we’d usually turn to for advice are our friends.

We’d never think of approaching our parents because we’ve never been taught to express our feelings for fear of being judged, or worse, have dinner time turn into a three-hour lecture about abstinence.

But let’s not forget that they too have had their share of awkward first dates and painful heartbreak.

So we asked 8 Singaporean parents to share what they wish they knew about dating in their twenties, and their advice is much more useful than “Just be yourself”.

*Names were changed to protect identities

1. Don’t let online dating be an illusion of choice

During NS, I bulked up and started receiving more compliments from the ladies. The attention got to my head and made me feel like I was ‘too good’ for my girlfriend.

After I broke up with her, I became a serial dater. But despite the numerous flings and relationships, the connection I felt with them wasn’t the same.

Even after settling for an arranged marriage, I still regret losing her as she was the best thing that’s ever happened to me.

With online dating nowadays, it can seem harder to cherish the person you have when presented with seemingly endless options.

But learn to appreciate what you have. It’s not about dating the perfect person but finding the person who’s perfect for you.
Jacob, 50

When I was in my early twenties, my mother would constantly ask “Eh, when you getting married?”. Pressured by her incessant nagging, my husband and I tied the knot at 23.

Though the marriage was a happy one, I wanted to travel more with my husband before getting tied down with family responsibilities.

Your twenties is a time of self-discovery and you should be enjoying your youth. There’s no need to rush into marriage just because ‘everyone’s getting married’ or for the BTO. Everything happens in good time.
Jill, 56

3. Just tell them how you feel

I met my wife on a part-time job and I was instantly attracted to her but didn’t have the courage to approach her. Thankfully, she made the first move and the rest is history.

I believe that the secret to our long, happy marriage was because we’re transparent with each other and never played ‘dating mind games’.

Use your words to tell your partner how you feel. Use them to tell a girl you like her and don’t be afraid to strike a conversation with someone across the bar.

Although opening up can make you feel vulnerable, it’s also a sign of strength and will help your partner understand you better.
Joseph, 60

4. Learn to trust your instincts 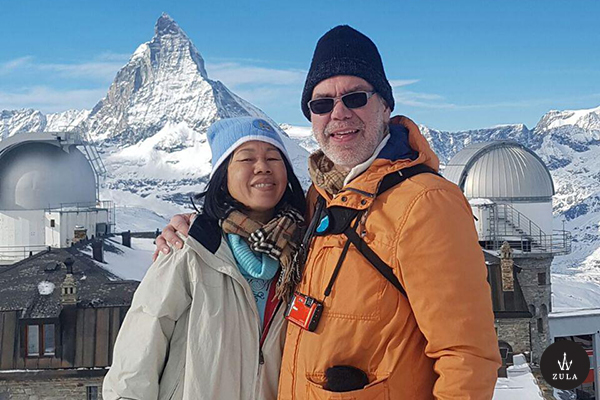 My husband is Caucasian and my parents never approved of him because of the stereotype that Caucasian men tend to cheat.

Against my parents’ wishes, we secretly married. Although they didn’t approve of us, they eventually came around to the idea of having an ang moh son-in-law.

Growing up in a time when interracial relationships were frowned upon, I felt like the world was against us. But that didn’t stop us because love knows no boundaries.

At the end of the day, it’s your life—you’re the one getting married, not them. You can love whoever you want, and other people’s negative opinions shouldn’t matter.
Nancy, 45

5. Live in the moment

I spent much of my twenties worrying about my looks, flaws and what my boyfriend thought of me. I always needed his reassurance to make me feel less insecure.

I guess I was afraid of losing him to someone prettier. It caused a strain in our relationship because I was so caught up with worrying.

Dating in your twenties can be daunting so take a moment to actually enjoy your partner’s company instead of fretting over issues that won’t matter in the long run.

We got back together eventually, and we’ve been married for over two decades now.
Rachel, 50

In my twenties, I determined my self-worth based on the men I dated. I exclusively dated the rich and wealthy because I liked how they’d shower me with gifts.

After seeing a businessman for a year, he proposed and I realised I was in love with his money, and he was infatuated with the idea of a trophy wife.

It made me feel worthless that I was just an ‘accessory’ to his glamorous lifestyle. I didn’t know any better back then but money really can’t buy you happiness.

Wealth is tempting but it’s also temporary. You have to value yourself first or you’d just get swept away by an unrealistic fantasy.
Tina, 43

7. Make sure you’re okay with each other’s habits

My ex-girlfriend was a hoarder. I wasn’t particularly affected by her strange habit until she moved into my place.

She refused to throw away the physical reminders of her past boyfriends, and still had their jackets, bags, and cologne. We eventually broke up because I felt there was no room for me in her life.

I wish someone had warned me how important it was not to overlook your partner’s quirks as these ‘little’ habits can give you major hints about your partner’s personality.

Everyone has habits for sure, but being able to live with their habits can make or break a relationship.
John, 45

8. You’re not a parent to your partner

I dated a guy who checked off my list as the perfect guy. He was tall, handsome, career-minded and a great kisser.

But he was lazy and expected me to cook his meals, take care of him, and do all the housework. I broke up with him when I realised I was dating a big baby.

It’s a red flag if he expects you to ‘serve him’ as both of you should be pulling your weight in the relationship. Using you to cater to his whims and fancies shows he doesn’t see you as an equal.
Jenna, 36

While bringing the topic of dating to the dinner table might be awkward or even ‘leh cheh’ to explain to our parents, their advice is certainly better than what Google has to offer.

After all, mum (and dad) knows best.