Why I Dislike Kids

Since young, I was conditioned to think that I would grow up, get married in my early twenties, and bear children. My grandma did it, my mom did it, and they probably expect me to do it too. But I grew up and learned that life isn’t black and white and getting married at 25 isn’t financially feasible. I’ll unabashedly admit—I hate kids, and have zero desire to produce any, ever.

To many, staying childless is unthinkable because a traditional family unit comprises of a husband, wife, and at least one child. But a growing number of us have shuffled our priorities in life. We just don’t possess this “parental instinct” that others gush about, and would rather spend our lives focusing on our relationships, careers, and personal well-being.

If you have an aversion to tiny humans as I do, here are a couple of situations you will definitely be able to relate to.

1. When a kid stands in front of you while you’re seated in the MRT and the parents give you a death stare

To be clear, I’m only giving my seat up because I don’t want to kena STOMPed. If you’ve the energy to climb poles and traumatise passengers, you probably have more energy than me to stand on your own two feet.

2. Like as if it’s not enough that they’re already ruining half your train rides with their screaming 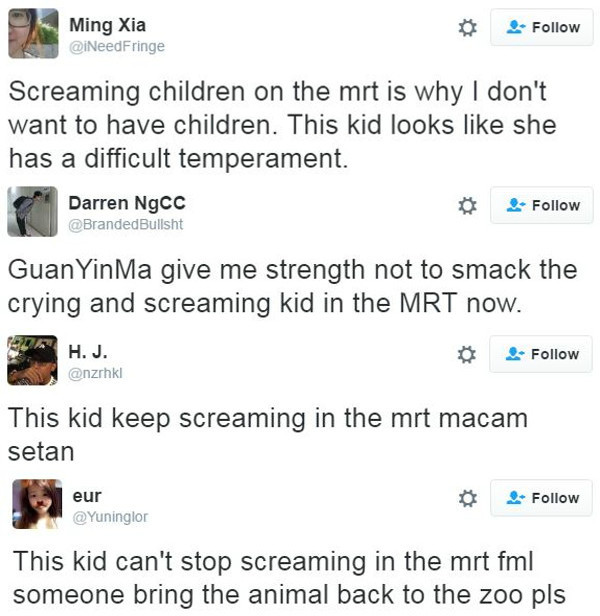 The people have spoken. The problem is real. 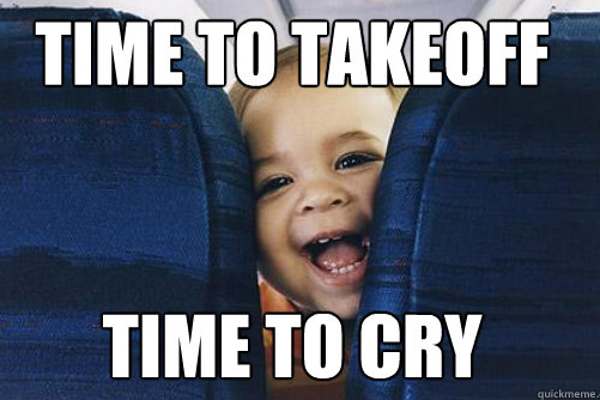 Now the only thing you can do is to hope and pray that it doesn’t turn out to be your seatmate.

4. Going to a baby shower and busying your hands with food to avoid carrying the newborn 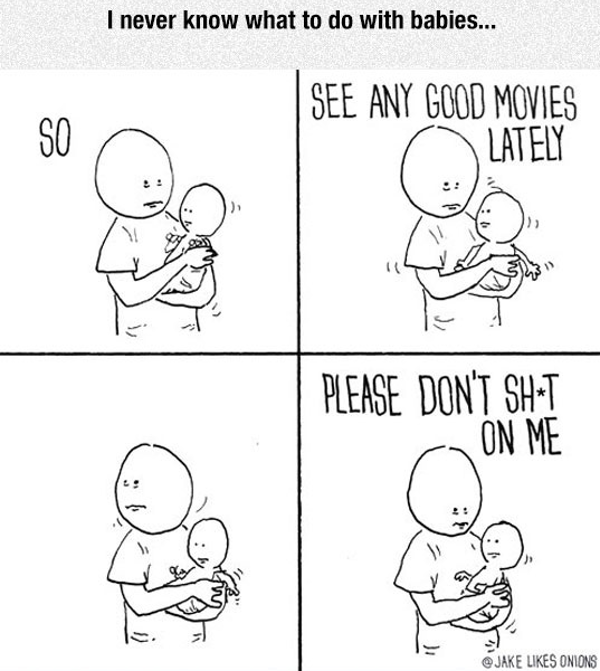 I’ll just admire it from afar, thanks. Don’t wanna risk dropping the precious thing. Or getting baby droppings on myself.

5. But the inevitable happens and you hurriedly pass the gurgling creature to someone else like it’s a hot potato 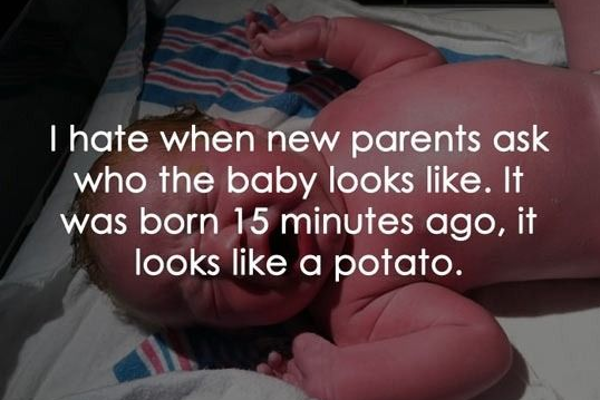 Except potatoes actually bring you joy. Especially in the form of McDonald’s curly fries.

One photo per day is still tolerable. But when every mundane activity from vomiting to getting its butt wiped is documented online, I can’t help but involuntarily shudder each time I open my newsfeed. Even worse when collage apps are employed – that’s 4x the horror in one picture.

7. When a kid falls down and you secretly go, “orh bi good”

8. That feeling when someone threatens to throw their kid into the dustbin, or sell them to the karang guni

9. But then it turns out to be No Action Talk Only

10. And let’s not forget the awkward standing around while your entire crew starts cooing at it unintelligibly

Because you can’t agree that the drooling infant is cute, yet you don’t want to start a riot and risk losing more friends as you grow older. Not that they aren’t already being lost to #parentinglyfe.

11. You see prams and wonder how many cats you can fit inside 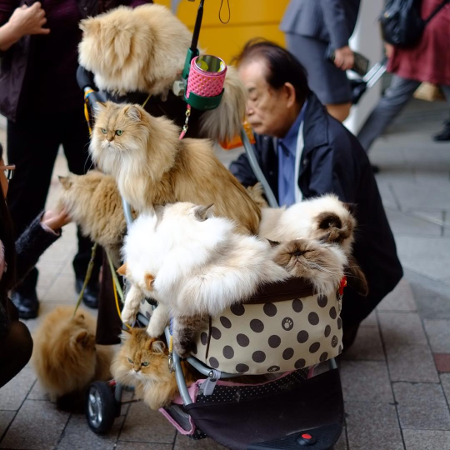 Why have 2 kids when you can have a purr-fect life with 12 cuddly kitties?

12. All your girlfriends have a love-hate relationship with their period, but yours is love-love Would much rather bleed for a week each month, cramps and psycho PMS-ing included, than be stuck with the burden of a child for a lifetime. Bring on the blood, let that red sea flow!

13. The only biological clock that’s ticking is the one in your stomach telling you it’s time for food 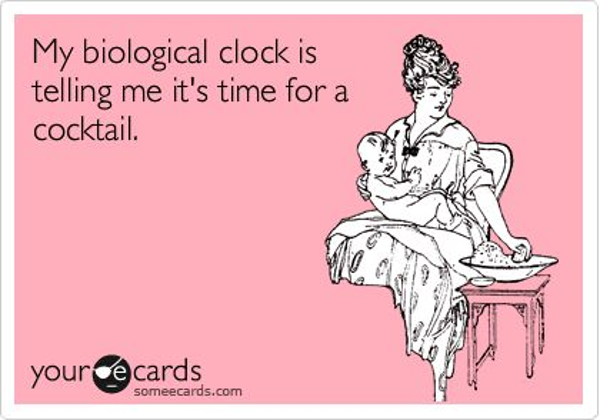 There are exactly 60 seconds left before I get dangerously hangry. And that tantrum-throwing preschooler in the vicinity is not helping with the bad mood.

14. When parents barge to the front of the toilet queue because their child is “urgent”, and you’re just like I thought diapers were invented for a reason. Why should the rest of us suffer just ‘cause you didn’t teach your child not to keep the pee sesh til’ the last minute? And you should be showing him how to line up like a civilised human being. Jeez, no wonder kids are so discourteous these days.

15. Remembering to utter “congratulations” instead of “condolences” upon hearing a pregnancy announcement 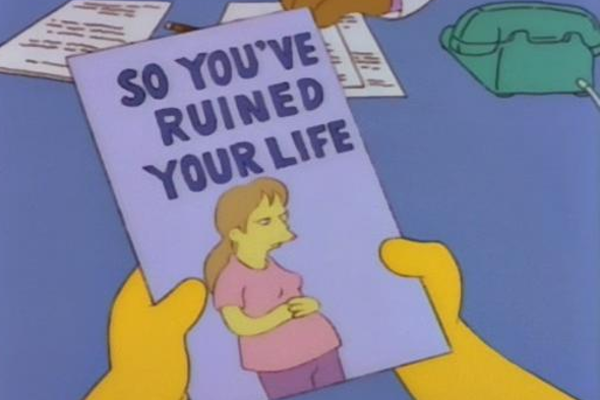 RIP to your social life. Actually, RIP to everything you once knew and loved; 7 solid hours of sleep, nua-ing in front of the TV during weekends, romantic getaways…the list goes on.

16. Because as optimistic as you try to be, you just don’t see anything positive in a positive pregnancy test 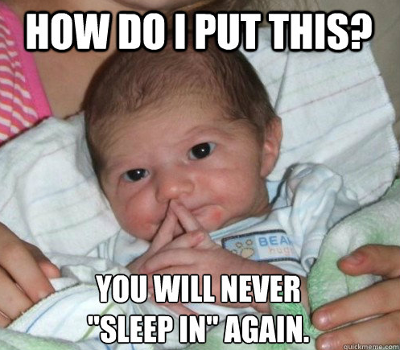 17. Being told repeatedly that one day your time will come and you will change your mind 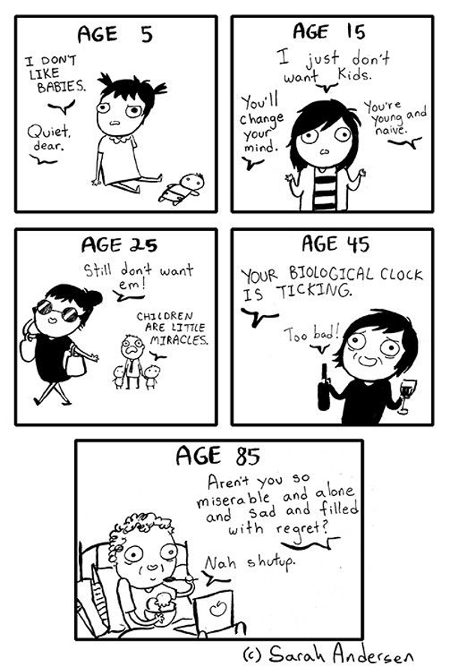 18. Betrayal is when your friends never let your BF tag along for brunch, but they bring their kids, uninvited

Oh, c’mon! At least warn me beforehand so that I can make a last-minute excuse and back out. Guess one-on-one girl bonding time is now a thing of the distant past. Just like the Tooth Fairy and Santa Claus. Both of which I’m gonna tell your children are fake.

19. Everyone else is getting bribed by the Gahmen’s Baby Bonus scheme, but you know better

Because you don’t even need basic Math to tell you that the cash incentive will never make up for everything else you’ll bleed. Or the daily frustration of having to deal with those little monsters in the first place.

20. To prove your point, you constantly remind your friends how much raising a child in Singapore costs 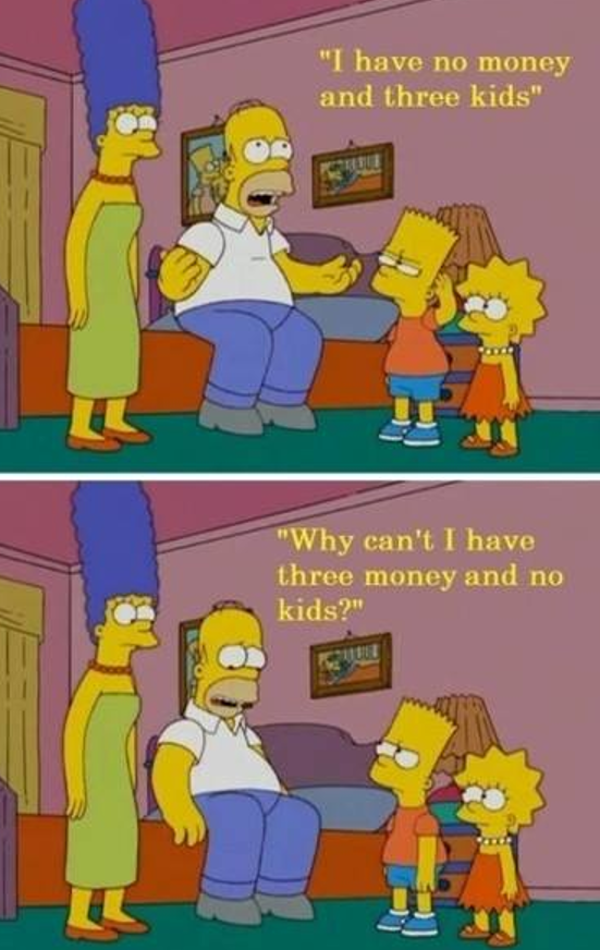 That’s up to a whopping $1m, by the way. Per child. Wait, what do you mean I can’t get a refund for that?

21. And what could be better than channelling that $1m into enjoying a carefree, child-free life? Conversations I have with my friends

Look at all the fun you could have by NOT having kids. Why would anyone wanna stay home to appease a noisy brat when you could be chillin’ in the Maldives? People are so strange.

22. Sometimes you contemplate taking up a career in playground architecture Me as a parent. Which is why I should never be a parent. Source

24. Restaurants where children are banned are your safe haven

What a wonderful dining concept. And yes, it exists in Singapore too.

25. When you wanna watch a Disney movie in the cinema…

And god forbid they start singing along, out of tune, in their whiny voices. Let It Go? Gurl, if I were your mom I’d definitely let you go.

26. Faking a smile when a random kid tries to play with you even though you’re super uncomfortable But that’s okay, because those tiny beings can’t detect fakeness. The downside to that though, is that once you display a remote amount of friendliness, they automatically think you’re their new best friend and cling on to you with their grubby hands.

I hate small kids and I cannot lie

Fact is, not everyone likes the same people. But just ‘cause we lack affection for a particular group, doesn’t mean we don’t try to live in harmony with them. Yes, preferably, I’d have zero interaction with children. But if a lost boy came crying to me, I’d definitely try to help, simply because that’s what any decent human being would do.

Freedom of choice, yo. If you find parenthood fulfilling, great. But I’m perfectly happy without children, and intend to remain this way for the rest of my life.

Rachel has a penchant for sparkly objects and sweet treats. Standing at just 145cm, she hasn't grown vertically since she was 12 and is proud to be able to don clothes and shoes from the kids' section. She also has the same birthday as Justin Bieber.