Polytechnic (poly) camps are widely known for being fun, rabak and a social lubricant to bond seniors and new peers. But through hushed whispers in intimate circles, one thing that always gets passed down from generation to generation is the ghost stories. This act of retelling some of the most iconic urban legends almost becomes a rite of passage for the freshies.

Whether fact or fiction, we compiled iconic stories across the various polys in Singapore with some of the lesser-known hauntings we heard about recently.

Disclaimer: All information in this article is hearsay and may have been conjured by hallucinations or rumours.

Rumour has it that an Indian construction worker was binding wires inside a pillar when his colleague accidentally buried him alive with cement. However, no one realised he was missing until the whole building was almost complete.

As it was too much of a logistical/PR nightmare, they left the body there. Till this day, many students avoid walking through Block 18 as that place exudes “bad vibes”. Some even claim that when a group of students play the “Murderer” game there, one of them is bound to get possessed. During one incident, a student who had a “third eye” held down the possessed boy, and slapped him until he vomited white foam.

Brace yourselves: these incidents allegedly occurred earlier this year.

TP’s gym recently underwent a major overhaul with a ceiling that’s about 2-3 storeys high. It’s practically impossible for any person to reach the window panels right at the top. However, while the ‘cleaning uncle’ was wiping the glass upstairs (from outside), he noticed a hand mark. After several attempts to wipe it off, he realised it came from inside.

Once, a gym staff was tidying the gym before locking up at night. But when he opened the gym the next day, he found the heavyweights completely rearranged—and no one had the keys except him. He also claimed that there were certain nights when the gym was empty but he could hear mumbling sounds and see shadows from the corner of his eye or through the mirror.

Apparently, this incident happened to a girl during a school camp when she was bathing alone at the last cubicle of Design School’s level 1 toilet.

Picture this: Four cubicles, three were empty. All of a sudden, she hears a loud bang! It sounded as though someone had kicked open the first cubicle door. Then she hears another loud bang—the second cubicle door was kicked open. As the loud bangs got closer and closer to her, a “lady” started counting down in Malay. When the third door was slammed open, she heard this voice that sang, “Satu Laaaaaagi” which is loosely translated to mean “one more left”.

Needless to say, the camper grabbed her stuff and ran out of the toilet without ever looking away from the floor…

An ex-TP student we spoke to claimed that the TP Student Union Committees usually stay at the campus until nighttime to chill. But on certain nights, they’ll hear the sound of chains being dragged across the floor. Whenever someone goes out to investigate, the noise would temporarily stop.

On top of that, people reported hearing someone sing in one of the cubicles of the old Student Sports Club room. But when they open the door, there’ll be no visible culprit. Even a janitor who worked at TP for more than seven years said that anyone will have “spooky feels” in that room. 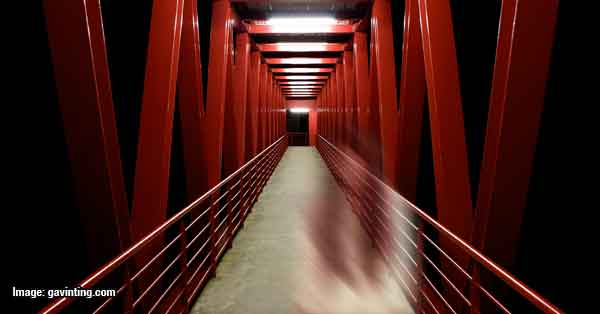 Being the oldest poly in Singapore, it’s no surprise to hear of SP’s spooky stories. The most iconic of them all is definitely the infamous red bridge.

Legend has it that the bridge was only painted red after many attempts to conceal the unwashable blood stains left behind by a student who committed suicide. Some of the stains also mysteriously seemed to appear no matter how many times they scrubbed it away.

According to the urban legend, there is a headless ghost wandering among the computer labs on the 3rd storey at SP.

It is said that the headless ghost only wandered around 7.00pm to 8.00pm and somehow appeared more during rainy days. Apparently, some technicians saw it, and other than pissing their pants, they spread these rumours among the students.

The most infamous ghost story from NP is about a girl who died after a freak accident. While working on a project in one of the engineering workshops at the campus, her hair got caught in one of the machines. The machine ripped off her scalp and she died a painful death. Passersby claim that sometimes you might hear screams from the workshop, even until today.

A little background information: NP was apparently built on top of an old cemetery and was used as a camp base for the Japanese during the Japanese occupation.

This story took place at NP’s swimming pool at the Sports Complex near Canteen 2.

A long time ago, a student who was in the swimming CCA was training late in the night at the pool. As he was doing his laps, he suddenly came face-to-face with a coffin that was floating across the pool. The guy swam out and got the heck out of there ASAP.

After experiencing such a terrifying event, he allegedly quit his CCA. Could this have been a real paranormal activity or a clever tactic used by any rival swimming teams to scare off the competition?

Here’s a story that’s a bit more lighthearted and a little far-fetched. According to sources, NYP’s Block K is a School of Health Sciences by day and a home for dummies that come alive at night. Some even describe this paranormal phenomenon as something similar to what a PG version of Night at the Museum would look like.

Just imagine it! All the dummies being used as study aids, now roaming the corridors at nighttime.

If that wasn’t enough to convince you to stay away from Block K, the next story might.

It’s the norm for students in the Nursing Block to be advised not to stay there too late at night. Apparently, the lift at Block K is hidden in a secluded corner behind a magnetic door. Rumour has it that the lift randomly stops at Level 3—where the dead bodies are kept for research purposes.

Since RP is the newest poly in Singapore, you might think they’ve fewer ghost stories to share. But here’s what I found:

At the Tanglin campus, RP students claimed to have witnessed supernatural occurrences. They said the land is haunted by the tortured POWs from the Japanese Occupation. The RP students then compiled an intranet database of the photos that captured the ghostly apparitions.

One funny incident that came out of this was how two girls were taking selfies in the toilet when they caught the picture of a “ghostly” figure reflected in the mirror. The news spread like wildfire and within minutes, students lined up outside the female toilet, eager to take a selfie with “the ghost”. I guess you gotta do it for da ‘gram, right?

Last but not the least, is a story by Madam Beda, a janitor at RP. According to the source, whenever Madam Beda was alone in the hallway, she felt the presence of “someone” or something there. Once she even saw the infamous “Pontianak” with her signature long black hair and white dress.

To confirm this story, a security guard at RP admits to seeing a mysterious figure roaming the hallways on CCTV. The security guard has kept some of the CCTV footage as evidence and claims that the scariest of them all is when the ghost was just staring straight into the CCTV.

With all that being said, none of us will ever know if the stories above are true. These urban legends are meant to entertain you at your campfires and to excite you when lectures get boring.

I’ve done my part to expose the Supernatural World: Poly Edition. Now it’s time for you to decide which poly has the scariest ghost stories.