Lunch conversations often revolve around, “I don’t understand why my girlfriend is doing this” and “I like this girl but I don’t know if she likes me back.”

To help the male half of the office understand girls better, the ZULA team had TSL writer, SJ, compile a list of burning questions, and we answered them to shed light on the enigmatic female species.

1. Why do y’all touch up your makeup at the end of the date?

Because we want to look cute and not have our skin feel oily when you kiss us later.

2. Why are y’all so obsessed with K-pop stars, or why do y’all stalk K-pop stars when there is zero chance?

According to ZULA’s resident K-pop advisor, Leah Shannon, it’s because you want some interaction with your idols.

K-pop fans usually begin stanning when a Korean idol catches their eye. Through watching videos of these idols promoting their music, acting on their own mini series or appear on more informal variety shows, you feel like you know about their personal lives.

This makes you want to attend their events and ‘chase’ them to support them and show you appreciate their hard work.

3. What’s the line between being confident and being creepy?

Confidence is when you know how to take “no” for an answer after trying your best. This means guys paying attention to and learning to read non-verbal and verbal cues.

4. Is it true that y’all apply different standards to different guys? (I.e a more attractive guy can get away with saying or doing certain things)

Yes to a certain extent. But if a super good-looking guy is a douchebag, he probably won’t end up with any girls too.

5. Why are y’all afraid of telling us guys the truth or your problems sometimes?

We’re constantly being told we girls are needy, whiny, and clingy. We don’t want to be bothersome, and we don’t want to be an inconvenience. If not telling guys our feelings can spare them the discomfort, we girls rather keep our problems to ourselves.

It’s kinda like how girls would ‘fake it’ in bed for their guys.

6. Why do y’all use bags that can only fit a few items?

Because overly huge bags don’t match our outfits and are heavy to carry.

7. Why do y’all subject yourselves to heels where they’re painful AF?

8. Why is there a need to go to the toilet in groups?

To support each other when we pee. 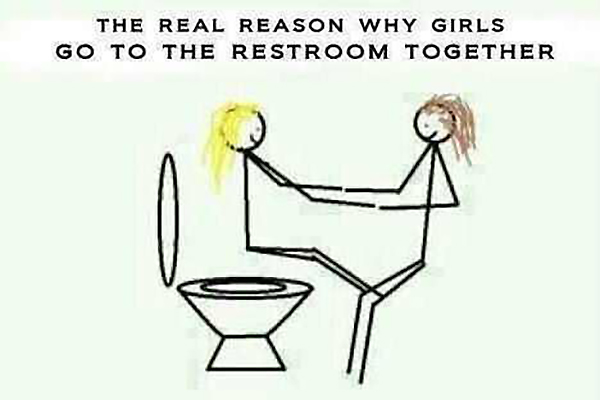 9. Why do some of y’all still hang out with people you secretly hate?

There might be two possible reasons. One, because they happen to be part of your friend group and you want to feel included so you still hang around them. Maybe you still want the person you dislike to like you because you feel insecure if they don’t.

Two, you hang out with a frenemy for the ‘juice’—you go out with them and if they behave normally then okay, but if they are rude or mess up then you gossip about what they did with your other girlfriends.

10. Why do you go on Tinder just to find friends? (E.g. Some girls specify in their bio they’re “finding friends”)

Some girls genuinely want to make friends. Others aren’t sure they want to commit and would prefer if they get to know someone as friends first, before delving into the possibility of something more.

11. Why do you wear makeup when you’re just going out with your friends?

We wanna look cute in the Insta-stories we take. We wear makeup to channel a vibe we’re feeling. More importantly, we wear makeup to look and feel like the best physical versions of ourselves.

12. Why do y’all believe in horoscopes, that somehow the arbitrary positions of balls of gas and plasma in the sky can affect the vagaries of daily life?

According to psychologist Dr, Phil Zuckerman, most women have an external locus of control—we believe we can’t control the outcome of a situation we’re in—so women tend to look to the stars for psychological comfort and support, that everything will be a-okay.

But also, reading horoscopes is fun.

13. Why do you girls say you’re not hungry when you actually are and keep taking my fries?

When you ordered, we weren’t hungry enough to order a full meal. So when the food came, your fries were the perfect portion size.

First, we have to get into the shower and wash our long hair and scrub our bodies down with a loofah while we let the conditioner soak in for at least 2 minutes. Bathing takes at least fifteen minutes.

Then, we get dry and moisturise/prep our skin before makeup (moisturiser + sunblock + primer). Then, we blow dry our hair for at least 10 minutes and curl/straighten it, depending on what vibe we’re going for that day.

There’ll be at least two outfit changes before we settle down to do our makeup. Most girls will do foundation, concealer, setting powder, brows, highlight, eyeliner, mascara, and lipstick. Painting your face right takes at least 20 minutes.

Then we have to accessorise, choose a bag which matches our outfits, pack said bag (and take out the stuff from the previous bag we used), before we wear our shoes.

Guys just shower, put on deodorant, spend a couple of minutes waxing their hair before they’re out the door.

15. Why do some of you not bathe in the morning?

16. Why are you girls so worried about weight all the time, even if you’re not fat?

Because most girls grow up with the idea there’s an ideal standard to conform to, and if you don’t reach that standard, your normal body is somehow considered flawed. And one of the more achievable ways we can ‘achieve beauty’ is by controlling our weight.

It’s entirely stupid, and we know that.

But since young, we’ve been told how a woman’s worth is tied to how good she can look. And now we’re older, it’s hard to undo this idea that a big girl can be beautiful.

17. Why do girls wear bras with the metal wire support when apparently, this type of bra makes your chest sore?

Because more comfortable bras have not been invented. And have you seen a girl with big titties? A bra with no metal wiring would make her boobs hurt even more and leave her unable to run/move/live like a human being because of their weight.

18. Does it feel like if you’re pretty, then life is settled for you?

From a non-pretty girl POV, yes. Girls who look better seem to receive preferential treatment from guys, and just generally do better in life. But just like how rich people have rich people problems, pretty girls have their own issues too.

To a certain extent, yes. If you have sex and you can’t feel anything, that’s not too good. But if a guy is bigger than average, it can be a huge turn off especially if all the dude knows how to do is ram it in.

20. Does a guy wearing a wedding ring or having a girlfriend stop you from flirting?

If you’re not undecided about whether cheating is wrong (it is), then yes.

Personally, we don’t care and feel most girls would say it doesn’t matter.

22. Are girls aware that they’re flirting?

Yes, we do know if we’re flirting, but like most guys, we’re also clueless on how to flirt.

What really matters is if he has ambition, a kind heart, and takes care of you and his mama.

24. Do you find it a turnoff when a guy smokes and/or has tattoos?

Questions Guys Have For Girls

We did our best to give genuine answers to the common questions guys have for girls. If you have more questions for us, let us know in the comment section.