While most of us only come close to war in glossy magazines and history books, Prerna Suri’s job is to be on the front lines of the battleground.

An award-winning broadcaster and journalist, she has reported from over 14 countries for major news networks such as the BBC, CCTV and Al Jazeera English. Today, Prerna is a full-time documentary filmmaker in Mediacorp’s international productions team with Channel NewsAsia.

In 2007, Prerna was the only female journalist in Darfur to report on Sudan’s civil war, and in 2008, the only journalist who accessed Tibet during the unrest. Her most recent project brought her to Europe where she covered the European refugee crisis.

Across a span of 15 years, she has also written for The New York Times and The Wall Street Journal, having interviewed distinguished world leaders such as former Indian Prime Minister Manmohan Singh and a host of other dignitaries. 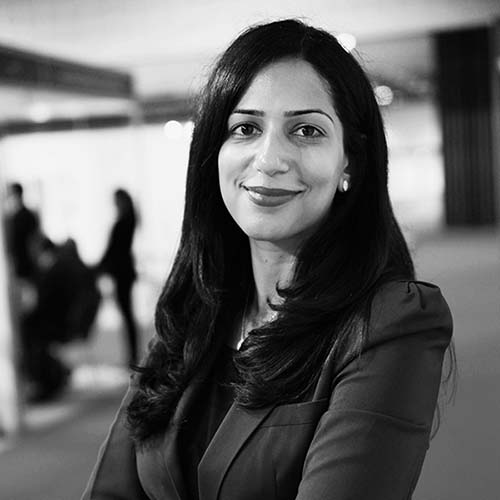 Prerna:
My parents were first generation immigrants who came to Dubai in the early 80’s, just when the petrol boom had begun. Dubai had been my home during my formative years, where I was fortunate to be raised in a multicultural environment. I had friends from diverse countries such as Bahrain, Iran, Iraq, and Pakistan.

I remember reading about the Watergate scandal at school where American journalists Carl Bernstein and Bob Woodward managed to overthrow an administration by their sheer persistence. Their doggedness to uncover the truth inspired me to think about journalism as a career.

As a child, I always knew I wanted to be in a creative field, whether it’s writing or on-camera reporting from a conflict zone. My parents told me I had a knack for standing up for the underdog when I was still in school and that’s where my interest to report about under-reported communities was sparked.

Almost shot by a stray bullet

I always have a bulletproof vest and a helmet on when in a war zone. People tend to be quite liberal with their gun usage in such areas, so you’ll never know when a bullet might veer from its destination and accidentally hit you.

I was in Kashmir covering an encounter between the police and alleged terrorists and while I was talking to people for a video package, I felt something graze my ear. It was only afterwards, it was pointed out to me that it had been a stray bullet! 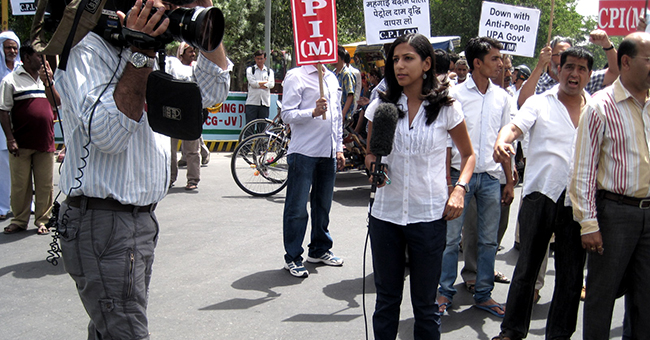 Less glamorous side of being a female correspondent

One of the stark realities of my job while out reporting is not having toilet paper—or even toilets. On a more serious note, I think we do have a few unique challenges when we’re ‘out in the field’.

As a female correspondent, you have to be camera-ready. When racing against time, you don’t just need to know what to say—you have to look refreshed and presentable too. You’ll need a lot of girl scout-like knowledge to be prepared for any situation; sanitary pads, tampons, hairbrushes, etc. Make-up is essential. It sounds quite superficial, but it’s part of the job and something you can’t gloss over. Once, I was out reporting about the anti-corruption rallies in India in the summer of 2011 and was sweating profusely while talking about the intricacies of Indian politics. It was only much later when I saw my package that I realised how sweaty I was!

I also got used to eating a lot of street food. When you’re on the road reporting from not-so-developed areas, it’s hard to find a restaurant or even the time to sit down and have a proper meal. After 12 bouts of food poisoning across 3 years, I think I can now handle almost anything. For the entire 20 days in Darfur with my cameraman, I survived on a can of dry beans and bread as the street food didn’t suit my vegetarian diet. Trust me, it wasn’t the most pleasant of experiences. My cameraman and I camped out in the refugee camps surrounded by disease and poor sanitary conditions until we got our interviews.

During the Cricket World Cup in India in 2011, I had to go to two cities in two days to cover the semi’s and the final match. I managed to clock in some sleep in-between airports with mosquito-infested air and on the grimy, rat-infested floors.To be honest, I was way too tired to even care at that point.

Although certainly dangerous, my experience in Darfur was absolutely exhilarating! I was 25 years old then. Looking back, I’m not sure if I’d have enough courage to do something like that again. However, gaining access to people whose voices were suppressed and uncovering their story for the entire world to watch is possibly one of my most career-defining moments.

During my visit to the refugee camps in Nyala, the stories I heard were truly disturbing. However, I felt that the stories had to be told—and that’s what I attempted to do with my cameraperson.

A story I still remember clearly is that of Mohammed. When I met him, he had an amputated leg and was being taken care of at a makeshift hospital tent at a refugee camp. He had fled from his village, where his family was being assaulted by the so-called Janjaweed, who are Arab militia in Sudan. In the process, he was attacked, and as a result, his leg was amputated. When I met him, his wound was not being properly treated due to the lack of medical personnel.

Another story that struck me was that of a woman who was fleeing in a group from the same village with her children. She was captured, forcibly removed from her children and sexually assaulted by her kidnappers. She did manage to escape and ended up being reunited with her children in the refugee camp, where I ended up meeting her. In a warped way, that was a happy ending to a terrible tragedy.

It’s always easy to capture misery and hopelessness in conflict zones—that’s a no-brainer. But what’s really difficult to capture on camera is people’s resilience and the stories of everyday heroism that gets left out of the narrative of war and conflict. Throughout my career, I’m not surprised by what terror humanity is capable of unleashing but how everyday people can rise above everything that’s going on around them and still manage to retain their inner humaneness. 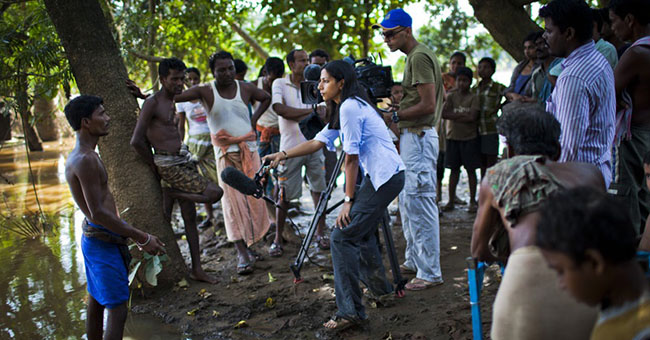 Dealing with assault and protesters

As a female correspondent, assault is a major concern, not just in the war zone but also when you’re reporting from different areas.

During the height of  tensions in Kashmir, I went to the capital Srinagar to report on the unfolding situation in 2010. We were recording a package and we realised that tear gas had been unleashed. Although it wasn’t the most painful thing I’ve ever experienced, it’s definitely not something I’d voluntarily go through again.

Another instance occurred in 2008, when I was doing an investigative report on commercial surrogacy in Vadodara, Northern India. I was living in a very shady hotel, and one night, at 3.00am, heard knocking at my door. I peeped through the hole and saw three burly and drunk-looking men outside, who were trying to get into my room.

My defences kicked in immediately, and I stacked everything I could possibly stack against the door in order to barricade it, and told them I had a gun in the room to get them away. Although that was a lie, it was enough to chase them away, thankfully.

The film I did on the European refugee crisis last year is one of the proudest achievements I’ve had in my life professionally. Speaking with people who’ve fled war, conflict and almost death made me realise how fortunate we are in our lives. Petty issues like the rat race or money shouldn’t be a concern if we have good health and loved ones. Covering migrant workers’ rights in Dubai in my early 20s also had a profound effect on my reporting and shaped my perspective towards giving a ‘voice to the voiceless’.

You really need to be a news junkie because that’s all you’ll be focusing on for much of your time. You should be able to eat and breathe political as well as business news and more importantly, connect the dots to see how events are shaped and by whom. A keen sense of curiosity, a questioning nature and never taking ‘no’ for an answer would also hold you in good stead.

There’s no “typical” day in the newsroom—and that’s why I love my job. Every day, every hour and every minute is peppered with new developments. As soon as you think you’ve got your head around a story, fresh developments occur which change your perspective. I’ve now started producing documentaries which I find is more like running a marathon; you need to pace yourself for weeks rather than sprint on a story as you would do with news.

I think we all, as individuals, go through cycles of introspection throughout our career and I’ve gone through my fair share of those moments. Would I want to be someone else? Sure. But would I want to change what I’ve already done to achieve it? Possibly not.

In my 20s, I was quite focused on my career and in hindsight, I don’t regret that at all. But a part of me does wish I had learnt a new language or travelled for pleasure a lot more. Other than that, I can’t think of any other sacrifices I’ve had to make.

Just believe in yourself and the sky really is the limit. Never take no for an answer. Trust me, persistence pays off. 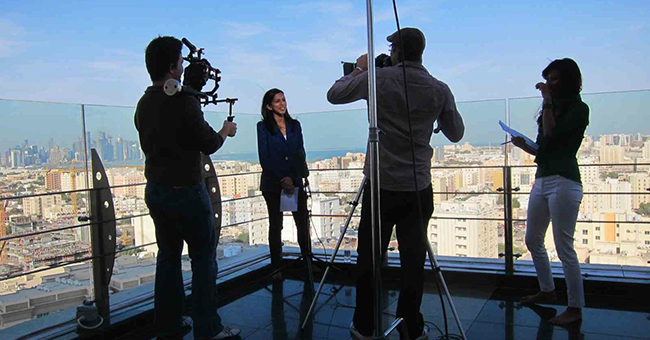 Unlike Prerna, most of us are comfortable living our lives in a safe country, observing the world around us through our computer and phone screens. The life of a news reporter certainly has its trials and tribulations, but you’ll be rewarded with a breadth of first-hand experiences and knowledge about world issues. And to us, good memories are worth more than material comforts can ever buy.