There are predominantly two types of people; night owls who need multiple alarms set at 7.05am, 7.15am and 7.30am, to get up in the morning. And overachievers who’ve already ran 2.4km, hit the gym, cooked breakfast, and won at life by then.

Team Singapore kayaking/canoeing sisters, Stephanie Chen and Sarah Chen, carpe diem so hard with 11 trainings a week, I already felt tired when they described their routine to me.

Born into a family of athletes, Steph and Sarah followed the footsteps of their two elder sisters who were ex-national kayakers.

Apart from nailing the gene pool with #fitspo bodies they credit to “genetics”, they’re both SEA Games gold medallists. Although Steph and Sarah didn’t make the cut for Rio 2016, they say “Rio was not the aim, but Tokyo 2020, as we knew we weren’t up to standard yet. We just aim for progress.”

Besides sports, we met up with the duo to chat about how they deal with each other’s PMS, weirdest things they’ve seen in the water and more.

It’s 10.00am when my photographer and I reach the Kallang Water Sports Centre. The brutal sun makes us squint at two ripped physiques walking over after a morning swim. “Dayum,” I mumble. My photographer feels ashamed to be a guy.

Steph and Sarah open the gates to the quiet boat shed, with rusty gym equipment sprawled out like some backyard training place for a Karate Kid underdog. A Rocky Balboa entrance song plays in my head.

“We have some equipment that are unique to Kayakers. They simulate different parts of the paddling movements. Let me show you,” says Steph. 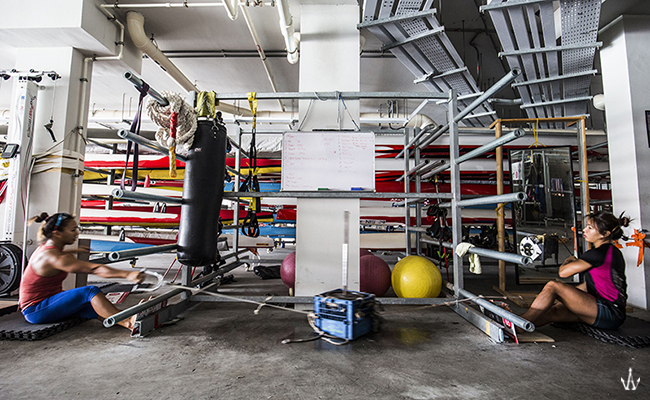 Featuring The Box Pull…may we all take a minute of silence to look at ’em biceps.

In the DIY blue basket one might find in a local wet market, Bok Choy is replaced with heavy metal plates, with ropes strung on each end. “The pole is for the guys to add more weights,” they explained. 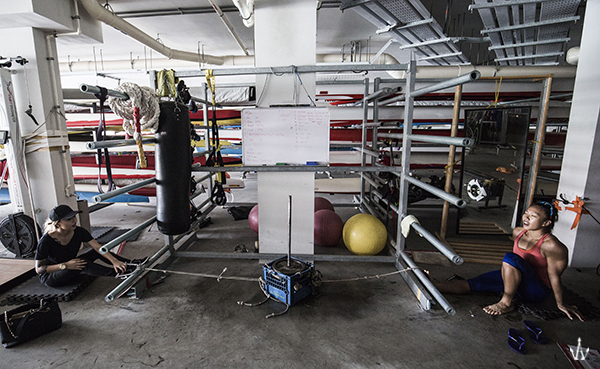 I foolishly attempt to conquer this dubious market box and manage to pull it several times. But once Steph tells me they have to do 10 reps with 30-second intervals for 15 minutes, I go “I’m out, bye.” 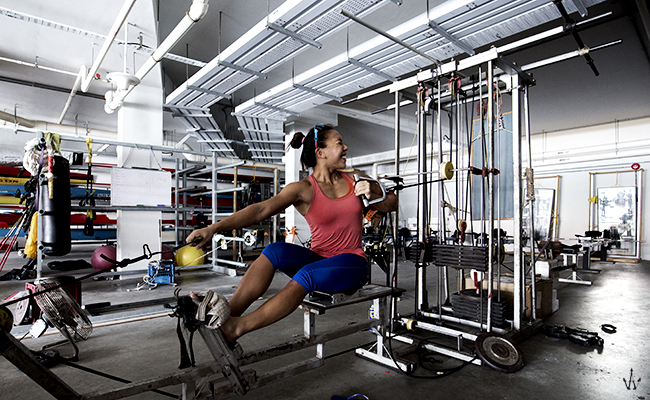 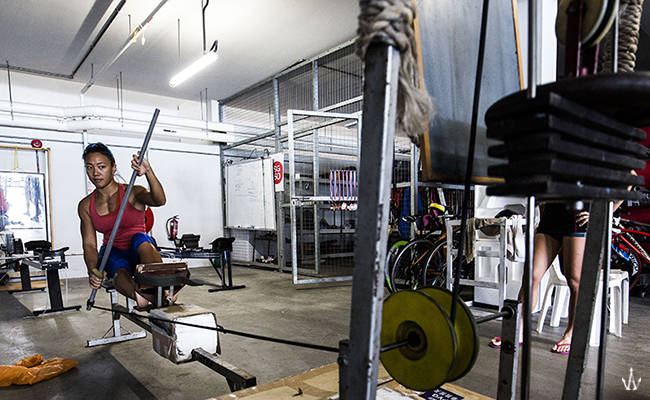 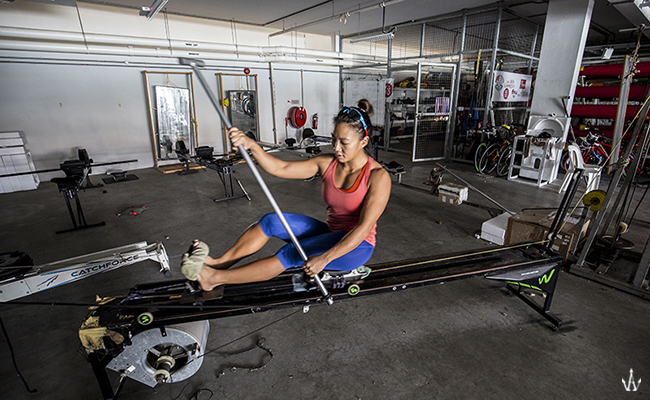 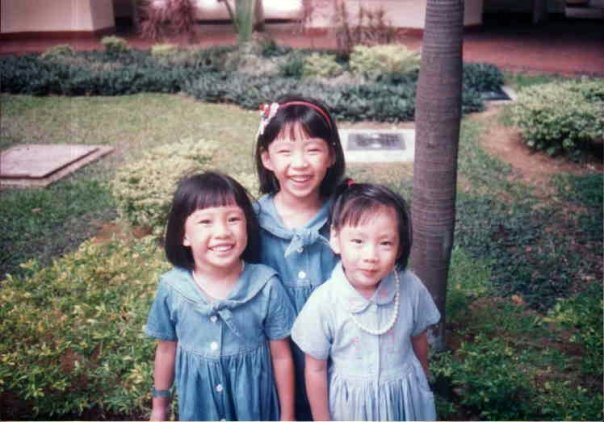 Steph:
I picked up Kayaking in Catholic Junior College and studied Sports Science in UWA, but it was more of a topic of interest than a career path. I spent my first paddling session capsizing non stop, but it was a good challenge. We’re pretty young in terms of paddling experience so it’s a struggle to compete with those who’ve been paddling since 12 years old.

Sarah:
I went to St Margaret’s Secondary school (polka dots for life!) then Nanyang Polytechnic to get a Physiotherapy diploma. My older sister was paddling in the national team then and I thought it was cool to join her. I didn’t realise until years later that competing on the world stage would be much harder, but I was hooked. Sarah carrying her 12kg boat to the water with ease. 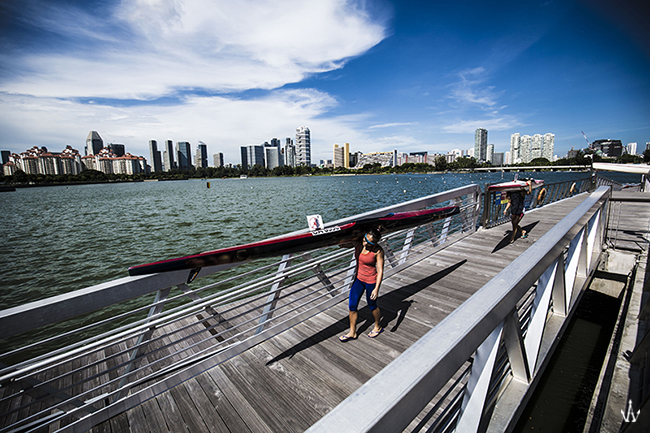 The sisters train 10-11 times a week, for 2 hours per session with variations of water, weights, skike and swimming. During off seasons, they cross train to get experience from other sports: running, cycling, cross country, skiing.

But for athletes, years of sacrifice can be easily dashed in a millisecond.

Steph: Emotionally, my most painful experience is losing the k2 200m at the 2015 SEA games. Physically, it’s my frequently injured body.

Sarah: I’ll never forget the 2014 Asian Games k4 500 race. I screwed up at the start and it wasn’t just me in that boat. I felt like I let the rest down. Even though they didn’t notice, I was pretty noob back then.

Steph & Sarah:
When we paddle in the reservoir, we deal with rubbish that flows in after a heavy rain; they range from sanitary pads to used condoms and carcasses. We also see otters, rats and huge monitor lizards that resemble crocodiles in the water.

But the weirdest thing has to be a dead body we saw once. While we were paddling, we thought it was some sort of plastic bag. We didn’t realise it was a body till we saw the police tent. Sometimes drunkards fall in and drown. 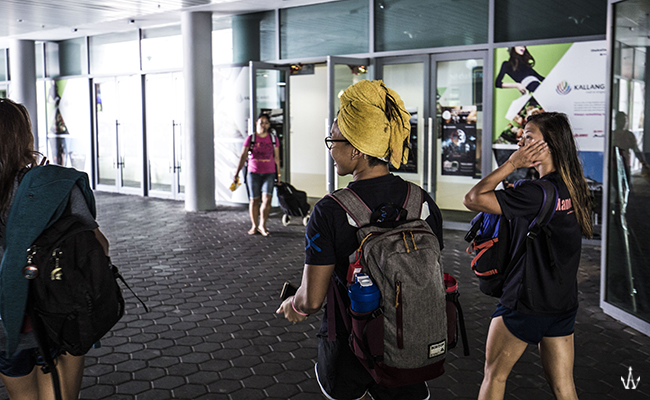 After paddling, the kayakers take a bath and Steph heads to the mall with a yellow towel on her head. 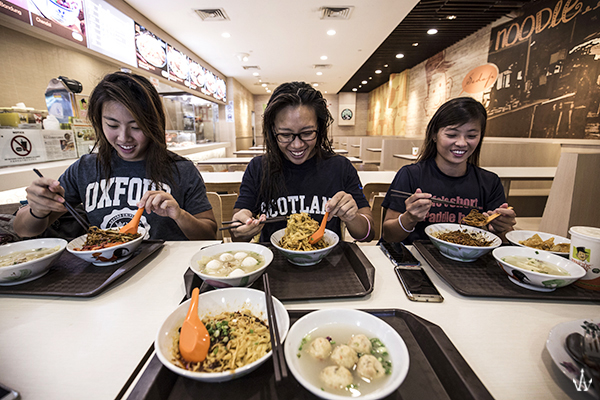 While most people would assume athletes live on a strict diet, Steph and Sarah don’t. “We try to watch what we eat, but we don’t eat clean. We don’t focus on getting a nice body. It’s a product of our trainings,” they say.

Steph: He can’t be weaker than me. He has to be mature. Personality-wise, as long as he’s not a weirdo, likes to travel, sense of humor and LOYAL.

Sarah: I admit, I’m an SPG aka attracted to caucasian men. I like guys who are driven and passionate about something other than the materialistic/drinking/partying kind of lifestyle. Definitely a guy who’s trustworthy and an open book.

Q: If Kayaking is out, what’s your plan B?

Steph: I’m not sure what I want to do yet. Probably something along the lines of management/events.

Sarah: Start work as a physiotherapist and use that opportunity to give back to the public. After all these years of only thinking about myself, it’ll be great to be focusing on helping others as a career.

The Sacrifice For Sport

Sarah:
As an athlete you have to be a bit selfish. Most of the time it’s about proper rest and food, so you can perform at training and competitions. You don’t have time to care about anything else and you only set aside time for people you care about. I guess we may not be the greatest people to hang out with, unless we’re friends.

Steph:
Just because we look fit doesn’t mean we aren’t tired. We also like to sit down on buses/trains, but don’t get me wrong. I’ll give up my seat if I think you need it.

Taking a break in the Athletes’ Service Centre

Steph:
The National Kayaking team is fortunate to have most of its athletes on the SPEX scholarship so we’re supported to train. We don’t have brand sponsorships cause we’re not what you would call a spectator-friendly/corporate-friendly sport but we’re definitely open and looking.

Sarah:
We’ve a lot of our seniors to thank for the financial support given by the government now. Because of their results, we were noticed when the sports institute started moving into developing professional athletes. We’ve quite a low profile so we don’t get other sponsorships. But good thing is, we can keep our heads down and train.

Having A Sister As A Teammate 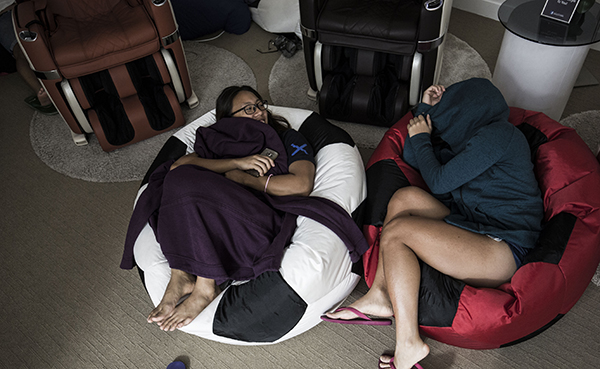 Sarah:
Steph will always have my back and I’m there to celebrate when she achieves something for herself. But even if we race each other, I know she’s not gonna let me win just because I’m her little sister. I want to make it to the Olympics but I want her to make it too. If somehow things don’t work out for me. I’ll still be there to support her.

I was racing with k2 200 with Steph in one of the Asian Cups. My coach then didn’t expect much from me and didn’t even let me train with Steph in the teamboat as she had more important races. When we shocked him by beating a Japan boat…well let’s just say never underestimate a Chen #chenpower.

Steph:
Not qualifying for Rio indicated I had a long way to go and it geared me up for the next season. It helps that I’m very competitive, especially when I have someone else to train with. Sure you have teammates, but having your sister make the same life choices as you helps in ways I can’t describe.

Sarah:
Plus if Steph is getting up, there’s no way I can lose. If I have any difficulties, I’ll complain about it to her then suck it up. Sometimes I just tell myself to “fake it, till you make it” and move on. Watersports tend to have a higher risk factor but we’ve paddled in rivers with rapids and survived so I tell myself, what’s there to be afraid?

Kayaking is ultimately an individual sport and it’s about personal responsibility more than anything. If you fail, only you can pick yourself up again and find the drive to do better. “Eh can we pose liddat?”

The Journey That Matters

One of the Olympic coaches gave a talk recently and he used a simple analogy; if you don’t put money in your piggy bank, don’t expect to have any savings or profits from what you do.

While most people set yearly resolutions, Steph and Sarah only need a single dream—which is enough to make them carpe diem as hard as they do. Whether or not they’ll paddle onto the Olympic stage, having something to jump out of bed for every day is a blessing itself. And that alone deserves a spot in our daily #goals.