I Got An Anxiety Disorder From My Tiger Dad

Growing up with a Tiger Dad gave me an anxiety disorder. I performed well in school, but it was never good enough for him. If I scored 70 out of 100 marks, he would always point to the shortfall of 30 marks and wonder why I didn’t do better.

Even as an adult, I could never leave the shadow of his furrowed brows and angry tone. His voice would echo in my head with criticism whenever I made a mistake.

I went from being a straight-A student to getting a big fat A as an adult, in the form of anxiety.

On my worst days, I woke up with a throbbing headache and felt like my chest was imploding. I would crawl to the floor to lie down, hoping Jesus would rapture me the way Thanos made people disappear with a snap.

Unfortunately, he didn’t answer my prayers, so here I am to share my story and what I learnt from coping with anxiety.

Beginning from my teenage years, I would get mysterious headaches and a low-level nervousness whenever I was with people. Blocking out periods of time where I would be alone in my dorm during my college days helped me to cope.

Performance-related situations such as work, dating or having to speak in front of people worsened my condition. In my late 20s, I even distanced myself from social gatherings as being in public and social situations made me fearful.

It was almost as if my anxiety was calling me towards greater self-awareness and one day, I got a wake-up call from it in the form of a panic attack.

Once, while hanging out with a friend, he invited a stranger along. I don’t remember why but I was already on the edge and the sudden appearance of a stranger made me unravel.

You see, having an anxiety disorder means that there is an inner voice constantly criticising you for the way you behave, and much more so in front of strangers. It sounds like:

“What will they think of you?”

“You are making a bad impression!”

Although I was in an open space, I felt the walls closing in. I could hardly breathe and started crying. The voice increased in intensity, “You look so stupid right now! Why are you crying? Everyone will hate you.”

I felt like I had no choice but to run far away so I called another friend to drive me to the hospital. It was a Friday night, and they kept me in the ward over the weekend. I remember meeting my psychologist for the first time in the hospital. “How are you?” he asked me kindly. It felt like the first time someone had shown me concern in a decade.

Anxiety has a way of making you cynical so I’d brushed off all the “how are you’s” from my friends as a superficial greeting. The psychologist spent the next hour gathering information about my family.

In subsequent sessions, we spent a lot of time talking about my life growing up.

On one particular session, a long-forgotten memory surfaced. In that memory, I was 6 years old and swimming toward my dad as he had instructed me to. He motioned for me to swim towards him but he kept backing away. The distance between us kept growing further and the fear of never reaching him made me panic.

After exploring this with my psychologist, I realised that this fear was projected again and again onto all my relationships. When I was dating someone, it became how I could never reach their expectations. At work, I often felt like I might drown whenever my boss pointed out some mistakes.

My psychologist then told me to embrace my 6-year-old helpless-in-the-water self. I could not meet my dad’s standards but I could always meet my own. After the consultation, I felt my anxiety alleviate significantly. It also taught me how ‘transference’ affected my daily living.

Transference is projecting one’s past memories or emotions onto a current unrelated situation. For me, although dad wasn’t around 24/7, I would project his displeasure onto all sorts of situations, reliving the pain over and over again.

As I did not gain acceptance from daddy, I hoped that I could earn the acceptance from others to redeem myself. Recognising the pattern did not heal me immediately but it allowed me to reflect on seeming ‘rejections’.

In the past, whenever someone did not reply to my text, I assumed that I must have failed their standards somehow. Now I’m able to question my assumption—perhaps they did not reply due to other reasons besides what I did or said.

Recognising transference helped me to dismantle my anxiety bit by bit. I no longer felt stuck in a situation where I would always be a failure.

To My Friend Who Committed Suicide, I Wish I Had Recognised The Signs

Reality can be altered by shifting my perceptions

Before therapy, I believed everything my emotions and so-called logic told me. But after hours of therapy, I concluded that reality is subjective and often coloured by your own beliefs and perception.

For example, if you believe that you are never good enough, every interaction with other humans can be taken as evidence to reinforce that belief. Even unrelated frowns by passers-by can feel like a disapproval of you.

Once you work on your core beliefs, you will realise that reality is not objective but a projection of your personal beliefs and assumptions. This is why 2 people going through the same experience can emerge with different accounts. Truth is subjective to our interpretation.

To give another example, in the past, whenever I made a mistake, it reminded me of what a failure I was. After therapy, I learnt that mistakes can be seen as learning opportunities and don’t have to reinforce my identity as a failure.

Lady Gaga taught me to accept myself

While my biological daddy did not give me the approval I needed, I found solace in the work of Lady Gaga. Through her costumes and songs, she reiterated the idea that life can be whatever fantasy you choose to believe in, never mind the truth. 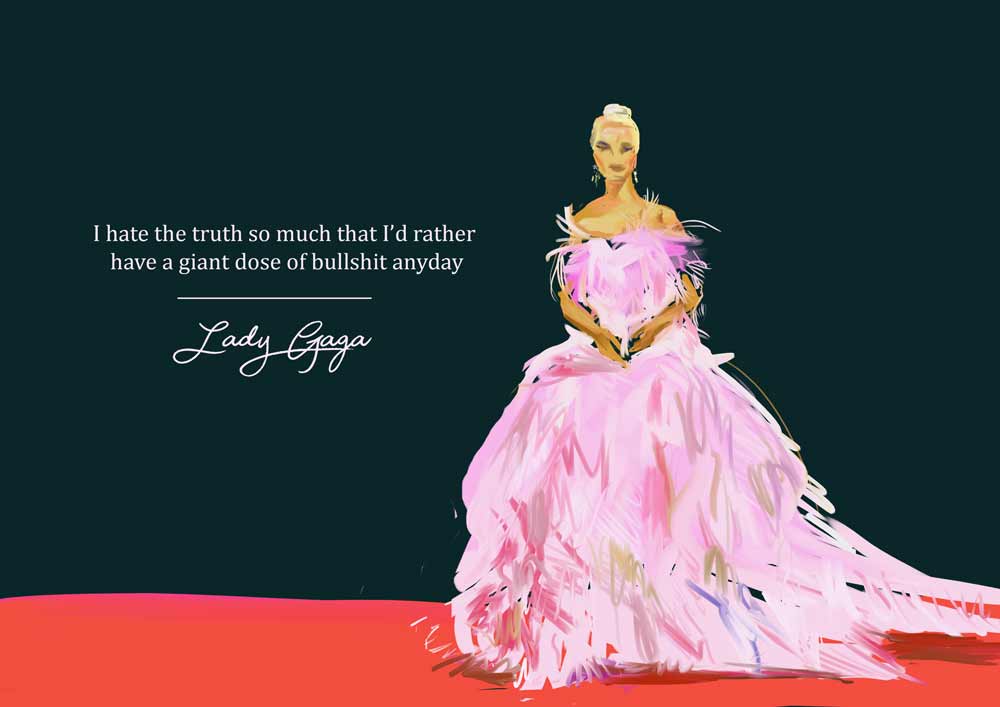 Her anthem “Born This Way” was an unabashed celebration of accepting yourself, because “God makes no mistakes.” Its message taught me a simple idea that nobody had ever told me before: it’s perfectly fine to just be yourself and accept where you are in life.

The song inspired me to take self-acceptance and self-love seriously. But you can’t just love yourself once and be done with it. Like eating healthily or going to the gym, self-love has to be a continual exercise.

As part of my healing journey, my psychologist recommended that I start mindfulness meditation. Simply focusing on my breathing whenever I get anxious helps me realise that I am not truly falling apart.

For people with anxiety disorders, the panic multiplies because the very anticipation of anxiety causes more fear. This multiplying effect can turn anxiousness (a normal sensation) into a crippling panic attack.

I found a teaching by a Buddhist monk rather illuminating. He had asked his father to teach him to meditate when he got panic attacks as a child. His dad told him to “welcome the panic” instead of asking it to go away.

In so doing, the incumbent panic attack became just like a dark cloud in the broad sky of his awareness. The cloud was scary but not overwhelming. It passed and the sun shone again once more. Meditation taught me about impermanence and suffering

Recently, I increased my daily meditation practice from 10 to 40 minutes. Panic and fear continue to visit me like an old friend but as I learnt from the monk, I welcome them instead of chasing them away.

The practice also gives me time to recalibrate my negative thought patterns throughout the day.

It could be a “sorry” I wanted to hear from someone. Maybe I wished I was further along in life or pined for the dog I never had. The next day, I might continue to cling onto these ideas but dedicating time to let go of these painful attachments rejuvenates and calms me down.

After much therapy and meditating, I concluded that the source of my anxiety disorder is the feeling of unworthiness.

When I was growing up, dad would approve of me when I scored As but berated me when I didn’t. After leaving school, I no longer had grades to justify who I was or tell me if I am doing okay and this made me feel unworthy.

While anxiety is a crippling, unpleasant feeling, it is your body’s signal to focus on your mental well-being. This idea of nursing my mind back to health greatly offended me at the start, because I was a go-getter, a stellar achiever in a meritocratic system where if you worked hard, you would do well!

Instead, I had become somebody who could not even hang out in public without feeling the jitters. Fighting anxiety taught me to let go of unnecessary attachments to achievement and worth. Really, the only thing you need to validate yourself with, is yourself. Panic became my teacher, my friend, my support for my meditation. I learnt a lot from my panic.
—Yongey Mingyur Rinpoche

I can’t change my past or get rid of my anxiety disorder but I can accept the present, moment by moment.

Ironically, many people think I am a super calm person now because I have been seeking ways to cope with anxiety these past few years. Learning about psychology also taught me many life-changing ideas that have so much utility in all kinds of situations.

Fighting anxiety was hell but it taught me to see the good in the bad and to prioritise my mental and physical health above all things.