Astrology App To Help Me Navigate My Emotions

“What is your horoscope?” This question usually elicits either of these responses:

“I don’t believe in this crap.”

Astrology has always just been a fun conversation starter for me.

But some time last month, I was feeling inexplicably sad and scrolled Thought Catalog for emotional affirmation. I chanced upon Thank God It Is Finally Pisces Season So I Can Cry To My Heart’s Content, which said:

“This probably isn’t the time of year to jump into giant projects or try to organize your life (sorry, Marie Kondo fans).”

It hit me like a ton of bricks because I had spent January doing Marie Kondo-approved things like decluttering, but now no longer had the mental capability to do so. Perhaps the planets had some guidance to offer me in my emotional slump.

Upon my colleagues’ recommendations, I downloaded Co—Star, an app that uses “NASA data, coupled with the methods of professional astrologers, to algorithmically generate insights about your personality and future.”

NASA and algorithms don’t tell lies, right? Co—Star, use thy NASA-generated algorithms to help me navigate my choppy sea of emotions.

After keying in your birth time (found on your birth certificate), birth date and the time zone where you were born, the app generates a chart of your sun sign, rising sign and moon sign. 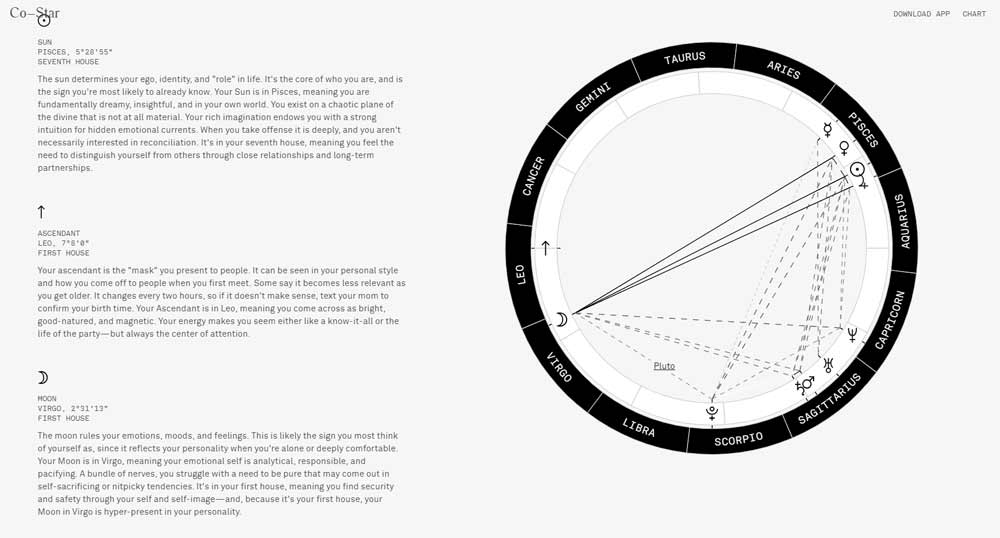 Your sun sign, also what most people mean when they say they are of a certain horoscope, determines your core identity: “Your Sun is in Pisces, meaning you are fundamentally dreamy, insightful, and in your own world.”
Wow, how did they know?

Your rising sign is your public face. Mine’s calculated as Leo: “Your energy makes you seem either like a know-it-all or the life of the party—but always the center of attention.”
Yes, I’m a know-it-all.

Your moon sign rules your moods and emotions, how you are by yourself. Calculated as Virgo: “A bundle of nerves, you struggle with a need to be pure that may come out in self-sacrificing or nitpicky tendencies.”
I get nervous easily, and often get nitpicky.

I decided to analyse the app’s daily readings over the week to determine its usefulness. 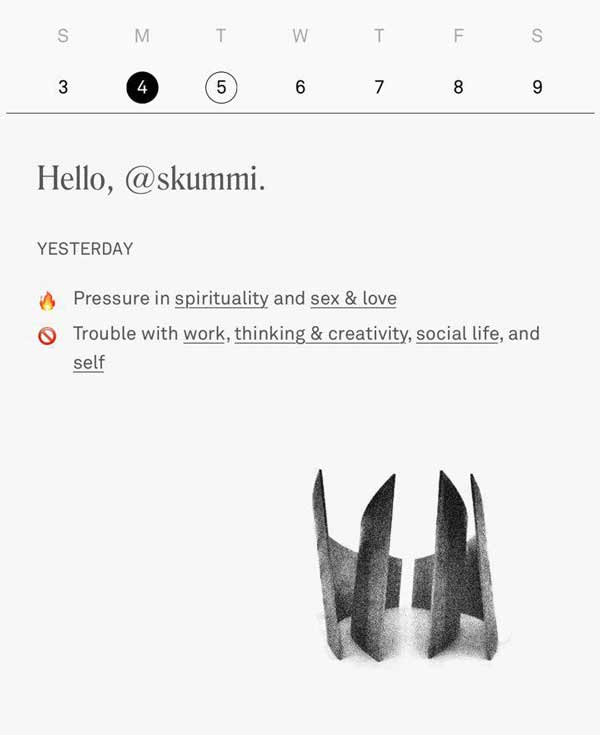 Two red icons spell trouble. I felt terrible, although nothing particularly bad happened. Should I attribute it to spiritual pressure from the stars?

Some of the daily advice I received:

“Your generous and sacrificing ways with the people you love is a tool that will help you become utterly focused on the present moment.”
???

“You have to become responsible for your own life.”
Very generic and applies to everyone.

“While scrubbing the floor, reflect on why you’re feeling resentment.”
Practical advice, but I had no energy to scrub the floor, so I passed on this.

Verdict: The two red icons spelt trouble and seemed to be accurate. Specific advice was too abstract to be utilised. 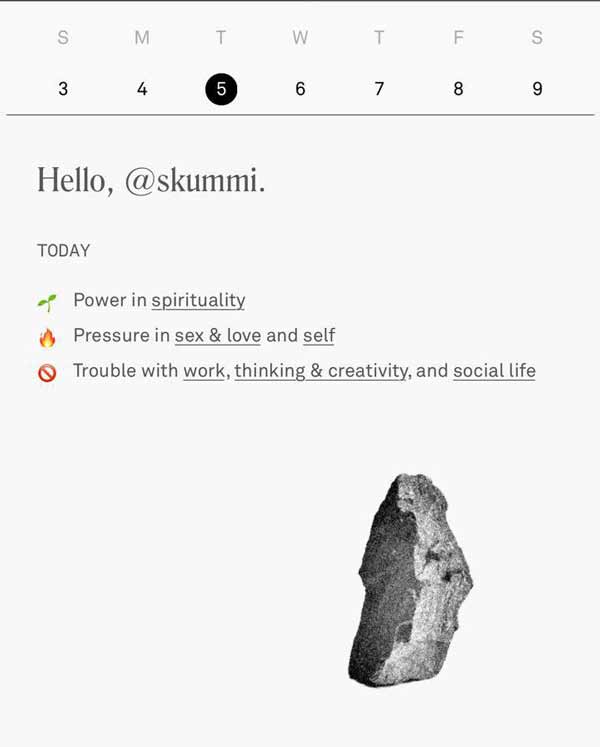 A green icon popped up. “Power in spirituality” doesn’t mean anything concrete but today was significantly more positive than yesterday. The abstract, fortune-cookie-type advice could make sense or not, depending on how skeptical you are:

“Don’t walk your path alone just to make a point. Consider the person walking beside you, and see where they’re going.”
I’m single right now, TYVM.

“Your Mercury in Pisces transforms your psychic abilities into a special power.”
Great, I always wanted to be a Psyduck.

“In this moment, you can’t access your broad perspective which stops you from making friends who challenge you.”
Sounds like a poorly-crafted sentence generated by a machine.

The rest of the week, no green icons appeared, meaning it wasn’t going to be fun. True enough, it was a challenging week. However, I found most of the daily advice too abstract to be understood or practical. 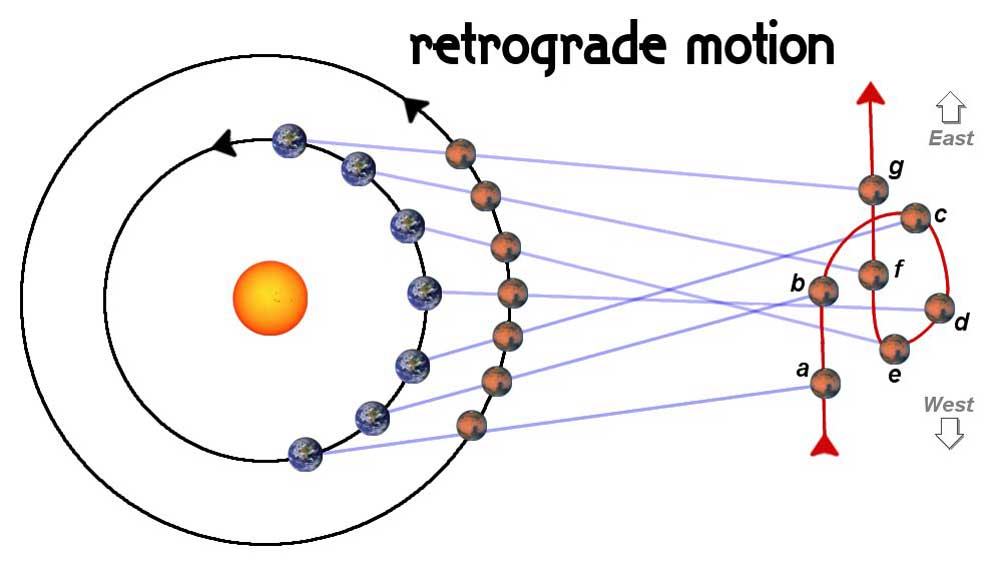 When I rolled into work this Monday morning, a slew of technical issues put me on edge.

I also get rather short when people don’t communicate clearly—for example, people asking me to buy a drink without specifying it should be in a takeaway cup, and assuming I can read their mind (it happened).

The tech and communication issues made me aware of a phenomenon known as Mercury in retrograde, explained here by the Astrotwins of Astrostyle.com:

“Three or four times a year, Mercury passes the earth in its orbit. As it rounds the bend, Mercury slows down and appears to stop (station) and spin backward (retrograde). In astrology, Mercury rules communication, travel, and technology—so all of these areas go haywire for about three weeks.”

5 March to 28 March is the first Mercury retrograde of 2019. The technical issues and communication problems were on top of a general writers’ block I had been having for weeks now.

Were the stars simply giving me a hard time at work? Can I blame Mercury’s orbit if this article fails to make a splash on the internet?

I was also blessed with this warning: Being a Pisces in Pisces season, coupled with Mercury’s retrograde, was making my life really hard—both words and emotions were meant to fail me.

We’re aware that some people are currently having trouble accessing the Facebook family of apps. We’re working to resolve the issue as soon as possible.

Maybe Trump knew something all along, picking Twitter as his communication method of choice. 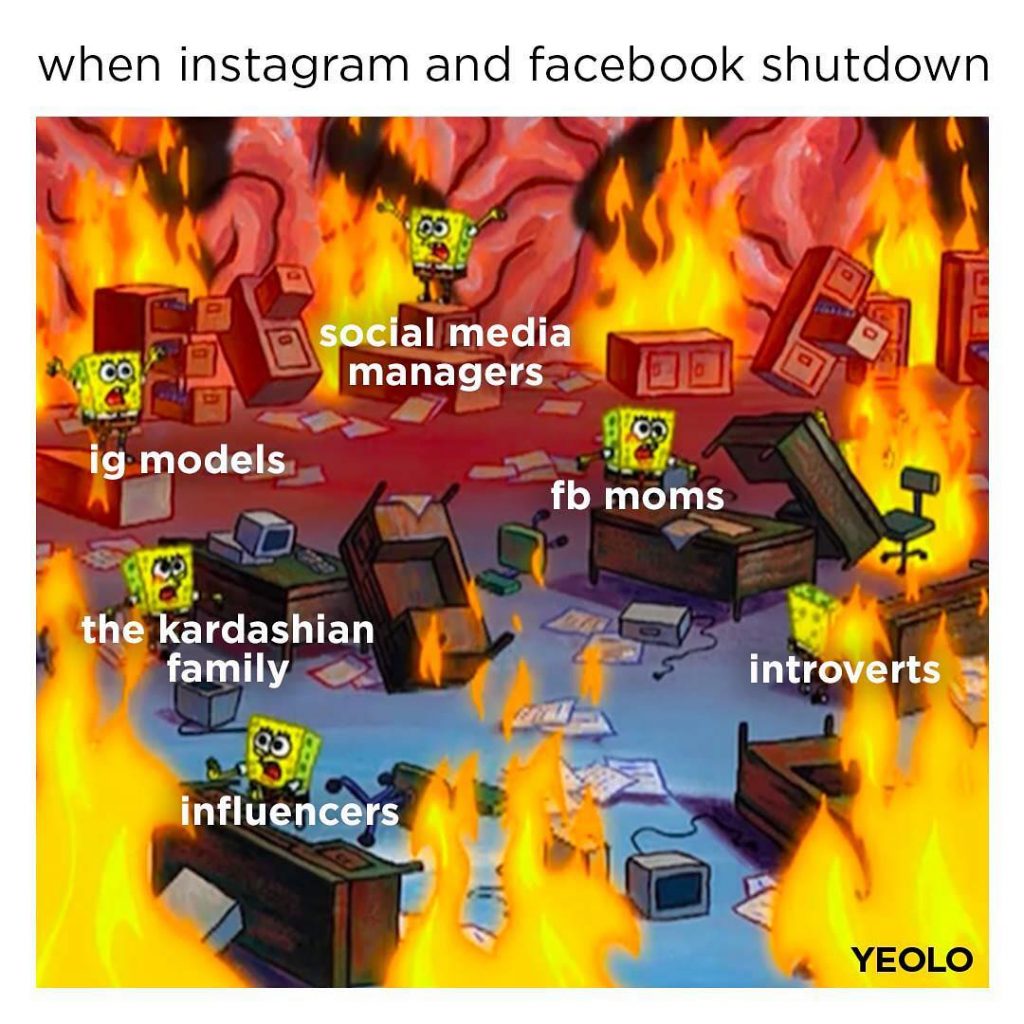 Believing the stars were in control (or rather out of control) helped me breathe easier that people weren’t liking my posts. As a Facebook commenter said, “Had to take my dinner round my neighbours’ to show them what I’m having….they liked it!”

This week, I also kept stuttering. Words would form in my head but garble up by the time they left my mouth. Mercury’s orbit was messing up our lives!

As I finish this story, we have moved into Aries season. True enough, I feel the haywire emotions giving way to steady determination.

“After Pisces season, which can leave you so attuned to the needs of other people that you forget your own, Aries season can call you back to your sharp, solid self.”
—Claire Comstock-Gay, New York Magazine

My pastor often warns us of the “horror-scope”, but I should be honest and conclude that the astrological predictions felt somewhat true, not the hogwash generic advice that it’s often dismissed as.

Whenever I lose faith in life, knowing the cosmos are in control reminds me that life is way bigger than my ego. Jesus might be taking the wheel of my life but maybe he designed the planets as our existential GPS.