Using Bumble After My Breakup

Getting back into the dating scene after a breakup can be hard. There are unresolved emotions, trust issues and well, realising that meeting people IRL isn’t as easy as it was before can add to our worries.

Enter online dating, where you can get back into dating and build new connections virtually. This, however, doesn’t mean that all the issues that amassed from your previous relationships suddenly disappear without a trace.

We spoke with Em* to hear about her experience with using Bumble after going through a breakup, which made her realise that being honest is always the best choice. Here’s her story:

Breaking up during Covid 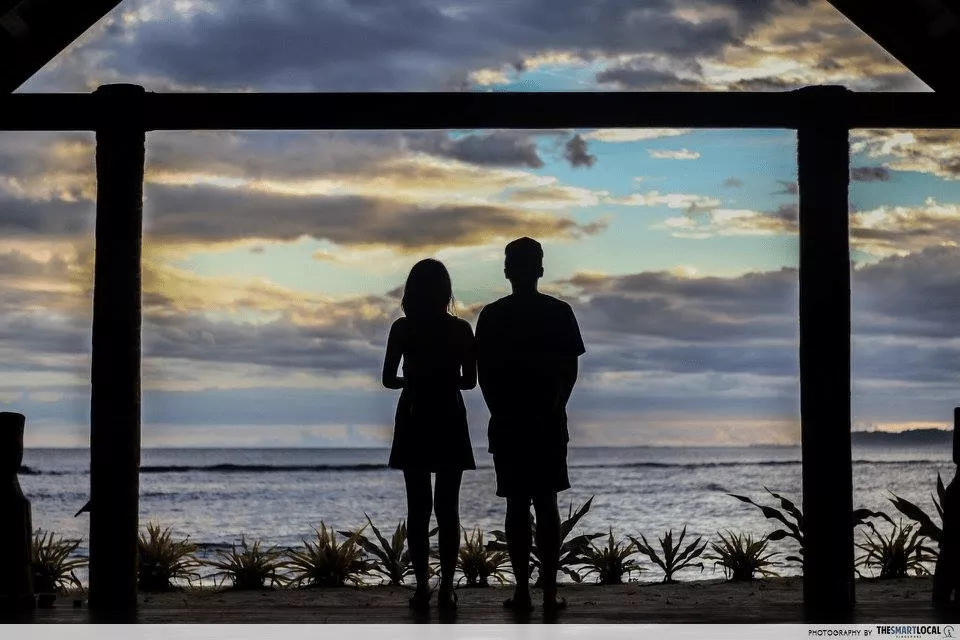 Despite our expectations, relationships don’t always lead to wedding bells and a BTO. Em learnt this the hard way. After years spent together, Em and her boyfriend decided to call it quits. And because time isn’t anyone’s friend, this happened in the midst of the 2020 Circuit Breaker.

The reason behind the split?  “We wanted different things in life. Even though there wasn’t one specific fallout that occurred, we realised that as individuals, our values weren’t aligned and we weren’t ready to take the next step [in our relationship]” she shares.

“My lifestyle changed drastically almost overnight. Everything seemed to be going well, but it all fell apart within a week,” she says. It was an epiphany for both Em and her ex, jolting her to the harsh reality of the state of their relationship. Before she knew it, Em was stuck at home, in a lockdown, without her usual pillar of emotional support.

Em spent a couple of months trying to get used to being single again – filling her days with whatever would distract her from the breakup, before finally deciding to bounce back into the dating scene. But how does one meet new people with all the social restrictions in place?

Getting back into the game with dating apps With the Covid situation making it more difficult to meet people organically, Em decided to try online dating. She realised that being in her early 20s, it was time to start living her newly acquired single life to the fullest. Seeing her own friends on dating apps and going on successful dates, it seemed like the most fitting – and convenient – way for her to put herself out there.

While she tried out a few different apps at the start, Bumble seemed to have “the best quality of guys” for her. “It was really fun and refreshing. I got to explore the whole process of meeting people and getting to know them better before meeting IRL. It was nice being able to relive the early romance phase of dating once again. What also appealed to me was how women had control by being the ones to initiate conversation”, she gushes.

“But it also made me realise that after being in a long term relationship, I had no game sia”, Em confesses in between giggles – something that I could relate to myself.

Still left with the emotional bruises of her previous relationship, she had her guard up and couldn’t be her 100% authentic self.  “When I [met] good guys, I couldn’t let myself go. I think it’s because I still had some trust issues to work through”, admitting that sometimes even the best of matches felt too good to be true.

So while being back in the dating game added excitement into her life, she couldn’t yet fully let go of her insecurities that’d been brought about by her past relationship.

Learning about how honesty makes a difference 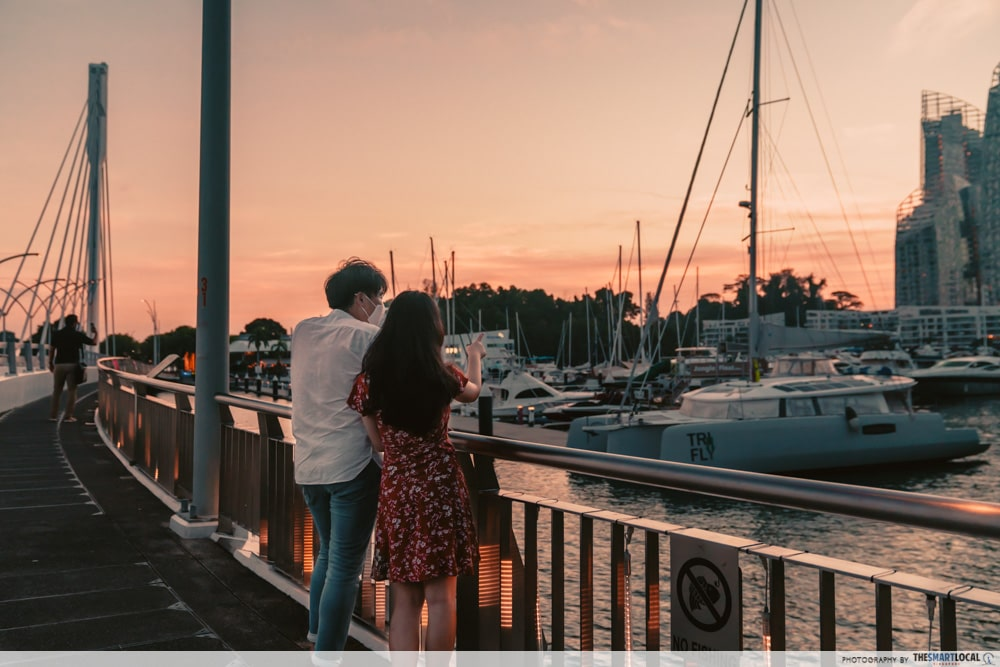 As with any budding relationship, it takes two hands to clap. But sometimes, it’s a little harder to hold up our end of the bargain in terms of honesty. For Em, in the initial stages of dating again, she was fixated on proving to both her ex, and herself, that she didn’t need him anymore, ultimately looking for a way to “win the break up”. She admits that this was a very immature thing to do, “I was basically looking for a rebound lah”.

So when she first started out talking to people again, her stance was what she terms, “very grey”, choosing not to be upfront with what she wanted out of her new connections and the conversations they had.

Despite her uncertainty, a particular incident led her to greater levels of clarity and self-discovery. “In the beginning, I was very vague with my intentions, I also didn’t set boundaries on what I was comfortable with. I was once seeing a guy casually, and he was seeing other people as well. We were both just trying out dating. It became difficult after a while because I developed feelings for him. It made me realise that I’m not able to date someone who’s my type just casually, ” she recalls. This made her come to terms with what she was or wasn’t okay with.

As she continued dating and meeting new people, she approached her love life with brand new eyes. “Sometimes dating doesn’t just have to be about meeting the one. It’s about the experiences, being able to know the qualities I can accept, and what my non-negotiables are when it comes to dating became clearer to me in terms of a relationship”, she shares.

The result of being honest with others & herself 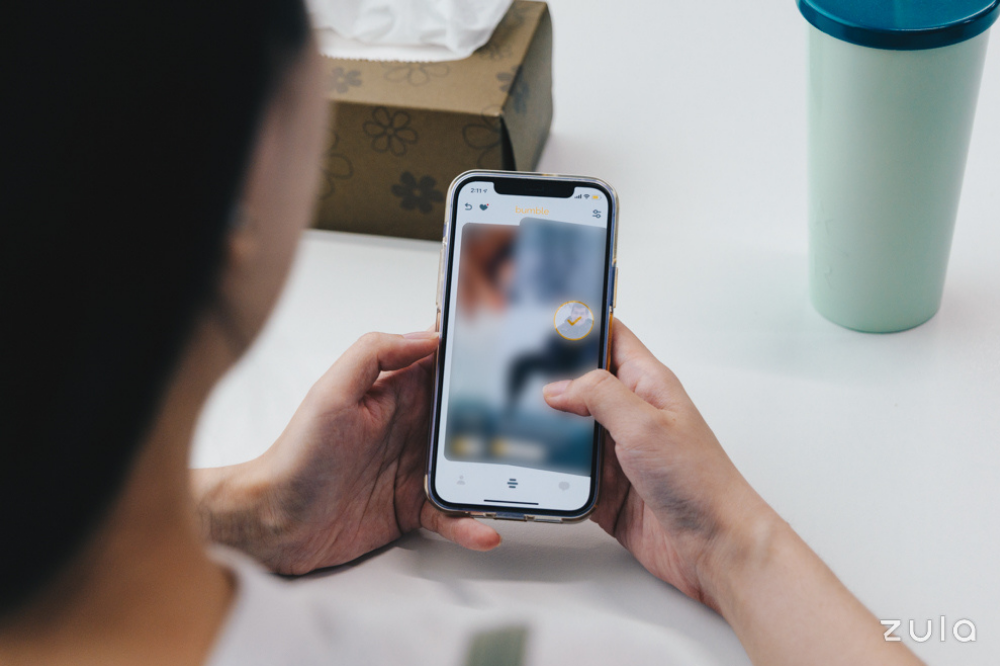 Em’s self-awareness became stronger with more dates she went on and got to know people better. Bumble unexpectedly became the push she needed to discover what she truly wanted, and in turn, she was able to work towards being more honest with the people she connected with.

In fact, it even taught her a lesson on superficiality. Online dating made her realise that “looks are not as important after all. I adjusted my expectations so I wouldn’t set myself up to get disappointed” she says. Em also mentioned how her focus on the app shifted away from just the profile picture, and to features like Profile Prompts and Interest Badges instead, from which she could get to know people on a more personal level.

“Now, I’m quite upfront. At first, I was scared that I would scare guys off with my earnest intentions. Now I realise that I’d rather be clear and honest about what I am looking for so that I don’t waste my own time. It helps when others are also clear and honest about their intentions as well”, adding that there’s no point in hiding what you’re looking for because it’s only you who’ll lose out eventually. Just by being honest that she was ultimately seeking a serious relationship from the get-go, she found that the connections she made started to get more genuine because the guys she matched with were on the same page as her. Em emphasises that you should even be honest over simple things like “hobbies” because you should want to find people with whom you can genuinely connect with.

“In the past, I usually swiped on those who put “I don’t know yet” on their profiles since it would leave things open-ended, but this time around I made the first move on a guy who was looking for a relationship. And when we hung out, the conversation flowed much more easily. He actually wanted to get to know me as a person, which wasn’t something I had experienced before. Even though he wasn’t typically my type, the vibes were really good”. While they’ve only been on one date, her reaction says it all – “a second date is definitely in the works”, she shares.

Advice for those who are considering using Bumble 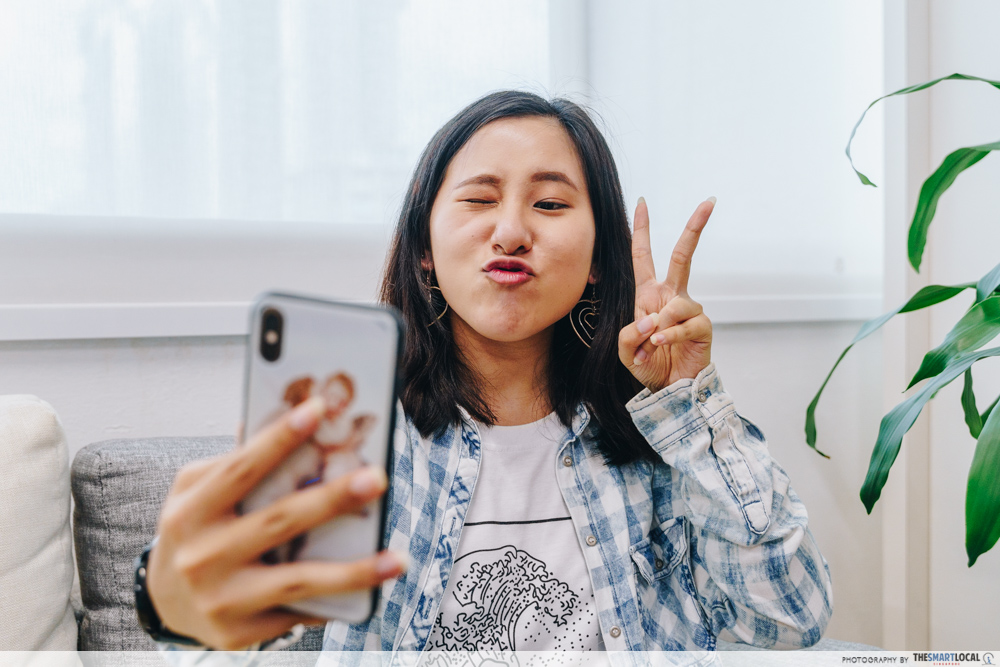 Em’s overall experiences using an app like Bumble have allowed her to “be a lot more adventurous and step out of [her] comfort zone”. “To be honest, I also gained a lot of dating experience and it made me feel more confident as a woman. Anyway Covid still exists, so life is short and I have nothing to lose”, she candidly declares.

She stands behind her opinion that making the first move and being able to start the conversation is empowering as she can take charge of her dating journey. 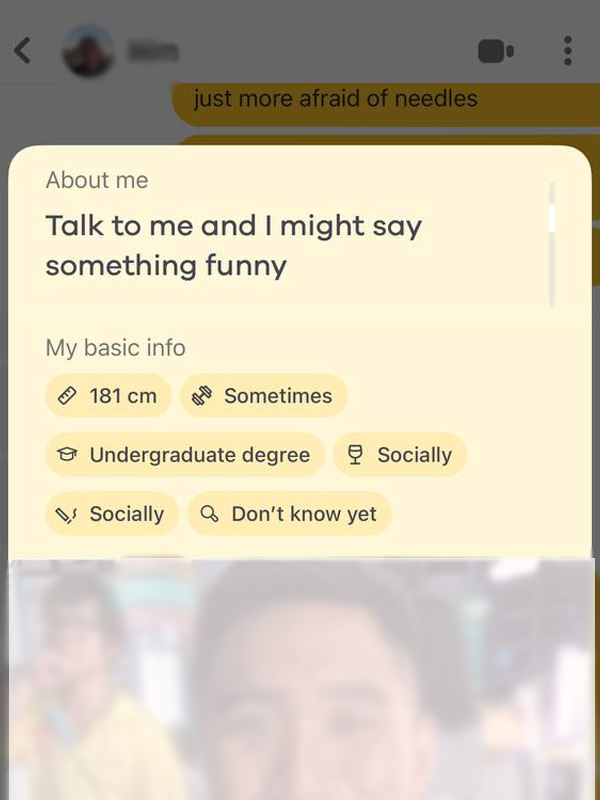 She further adds, “Usually on other dating apps, you might feel scared to reply to a really good looking guy. Here, since you text first, you can take time to write a great conversation starter or use Bumble’s Question Game feature so there’s no need to feel paiseh”. 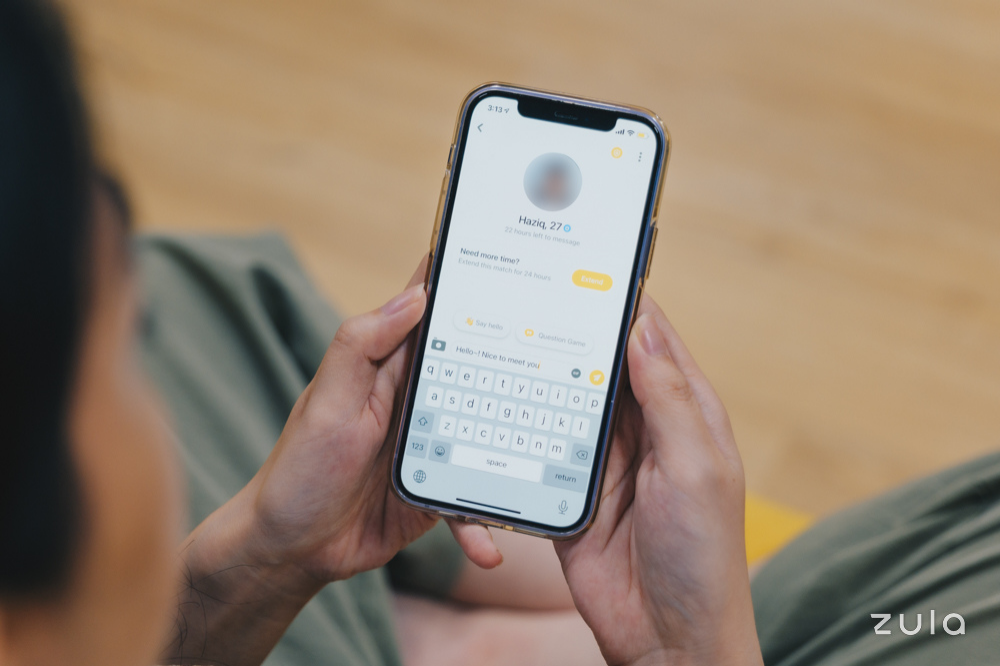 Arguably the best part about Bumble? It’s ladies first, always. This means that women have the opportunity to make connections with confidence, without feeling any societal pressure to hold off on texting first.

When filling up your profile, there are Profile Prompts and Badges that help you show potential matches what exactly it is you’re looking for too, be it a friendship, a relationship or even just someone who shares the same interests. For example, if you’re looking to find someone who’s willing to spend Sunday mornings hiking with you, just add “hiking” to your Interests Badges and violah – you can start a conversation on hiking trips with someone who shares the same interest as you. 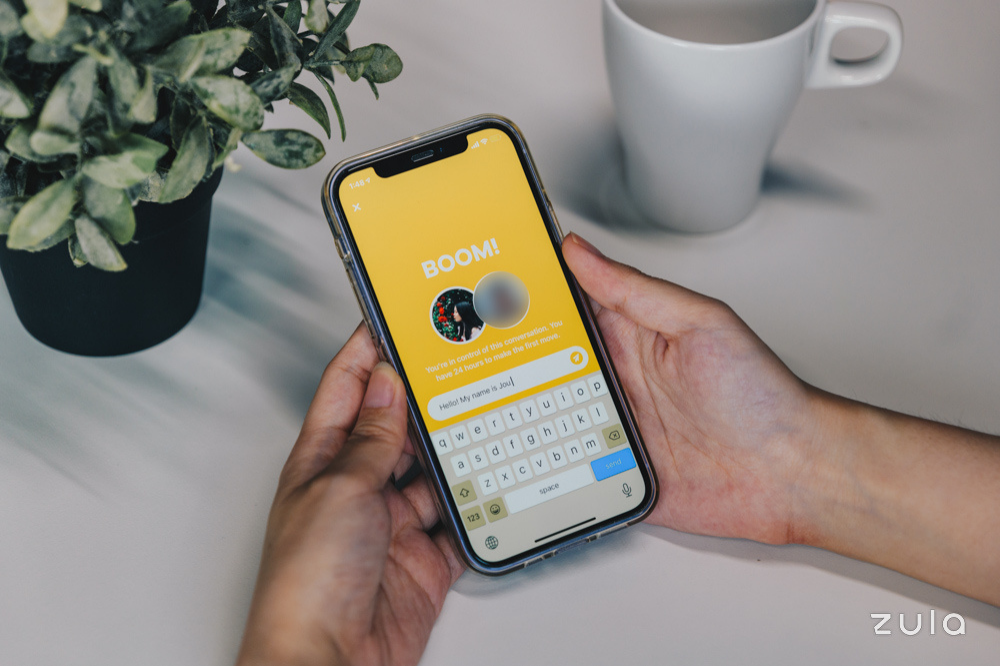 If texting isn’t your strong suit, there’s a Question Game you can use to help carry the conversation to deeper, more meaningful levels. And when you’re finally ready, take things further with Bumble’s in-app Voice Call and Video Chat features that allow you to really get to know your matches – if you’re a little hesitant to meet up face to face just yet.

Before you even set up your profile, Bumble requires all its users to take the Bumble pledge as well, promising to adhere to guidelines. The pledge requires users to commit to regulations like not impersonating others or misusing the account with inappropriate content. Anybody who chooses not to follow the guidelines can bid farewell to their chances of making a connection.

And, because we all know how sometimes people can be a little ignorant, there’s a block and report option on Bumble in any case where inappropriate language and behaviour is used. In fact, if you ever wind up getting sent a lewd image, aka *n00ds*, Bumble’s Private Detector feature uses AI to blur out the picture, which you can then choose to report.

In parting, Em asserts that anyone who’s been considering going on Bumble, “should just go for it”. While she herself felt scared to do so at the start, “there’s really no stigma, a lot of people use dating apps nowadays” she says.

This post was brought to you by Bumble.
Quotes have been edited for brevity and clarity.