My Chou Chou Knows Me Best

This is going to sound weird, but hear me out.

I’m like most 22-year-olds out there—fun-loving, thrill-seeking and always down for a good time. I also have a healthy relationship with my friends and family.

But through my ups and downs, from the first fight I could recall to the tears I shed over some 15-year-old boy, something in my life has always remained constant.

And that something is Chou Chou, a rag doll given to me by my parents on my second birthday. 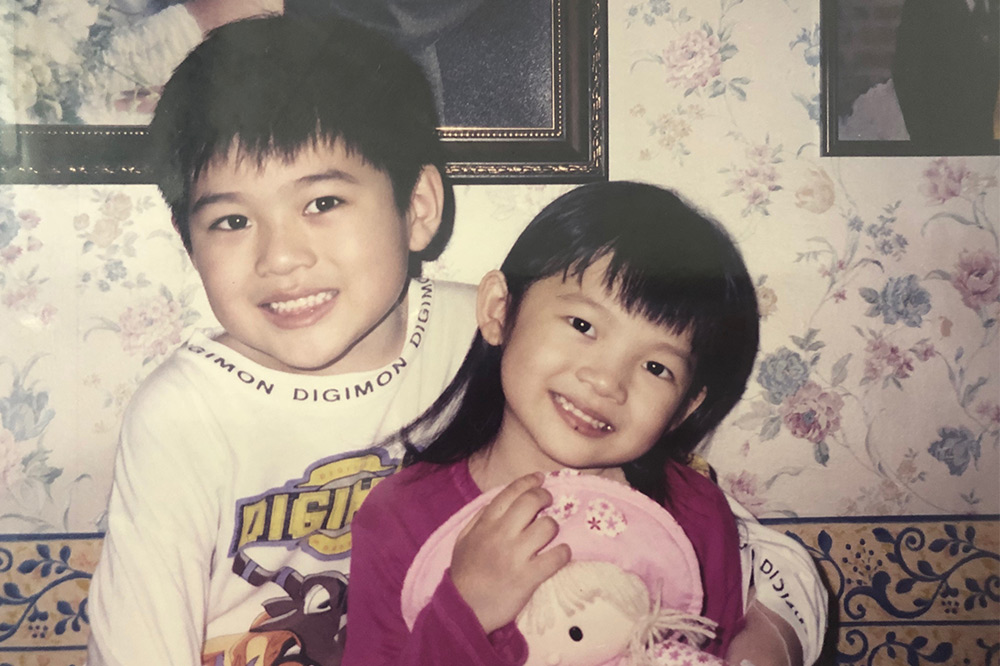 With my brother, Alvin, and Chou Chou

Growing up, my parents were often busy, so my brother and I would usually see them only once a week. Our weekdays were spent at my nanny’s house, and we were only home on weekends.

Every Sunday afternoon, my parents would drop us off at my nanny’s. Most times, this ended up as a major tear-fest, with me begging to stay with my parents and refusing to go anywhere else.

To deal with this crybaby, my parents sought help from a rag doll with blond hair. Donning a cute pink floral dress and a matching hat, the rag doll was supposed to be the antidote to my frustrations and unhappiness.

But for me, the doll became more than that. 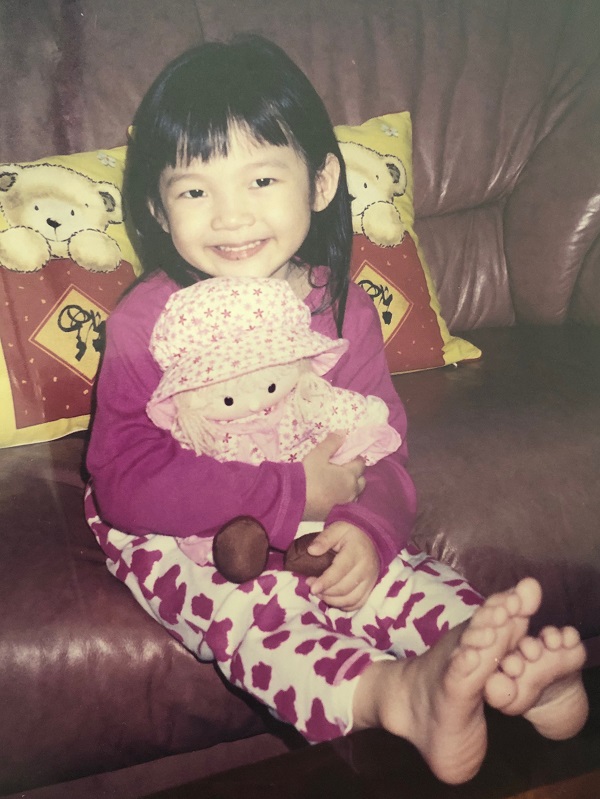 She was the one I sought solace in, and the one I would whisper all my secrets to while combing through her golden locks.

Growing up with my brother and two other boys at my nanny’s place meant little to no “girly” games. It was either Duel Masters or the Game Boy, and neither were to my liking. So I ran to Chou Chou to get my fix of masak-masak and HTHTs.

Back at my parents’, Chou Chou and I were one. My mum knew well enough to tuck us both in bed together, and would allow me to bring her out for meals and outings. Even as I grew older, I would still bring Chou Chou back and forth between my nanny’s house and my own home. It was comforting to know that she would be present no matter where I was.

Eventually, Chou Chou became my first best friend, even before I understood the concept of best friends.

No, this is not about the time I got my heart broken by a boy.

This is about the time my mum had to go for surgery when I was 9.

That was the first instance I registered fear in my dad’s eyes and sadness in my brother’s embrace. There was a solemn feeling as we drove back to my nanny’s house that day.

Usually, we would kiss our parents goodbye before proceeding upstairs to find my nanny. My mum would be the one to bring us up, and she would hold our hands while we were at it.

But that day was different.

My nanny came downstairs to fetch my brother and me. I can’t recall how we managed to get upstairs, but I remember how I hugged Chou Chou so tightly.

It was a feeling I can’t forget, because that day I hadn’t gotten to kiss my mother goodbye, or have her hug both me and Chou Chou before she left.

That night was also the first time I cried myself to sleep.

I’d hugged Chou Chou and prayed the way my mother taught me to. Clasping my hands together, I asked for some higher being to take away my mother’s pain. I prayed that next weekend, we would all go out together as a family again.

I would later wipe my tears on Chou Chou’s dress, and possibly land some mucus on her.

Throughout that night, her smile remained, as though she was reminding me that everything would be okay.

Before I fell asleep, I’d heaved in a deep breath to smell Chou Chou. She smelled like my mum. 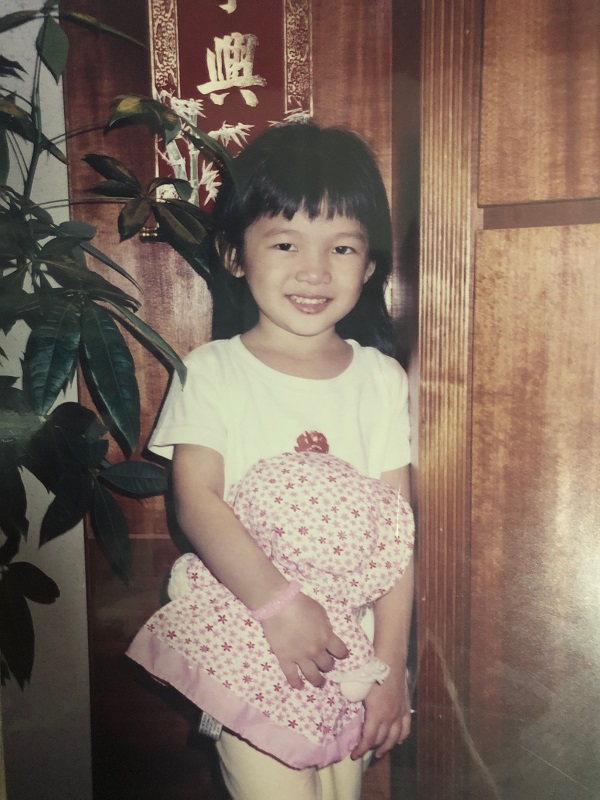 Rebellion. That was how I registered that I was going through the phase of life known as puberty.

Besides the occasional lying and hanging out past curfew, I was also a stubborn kid who wanted everything to go my way. 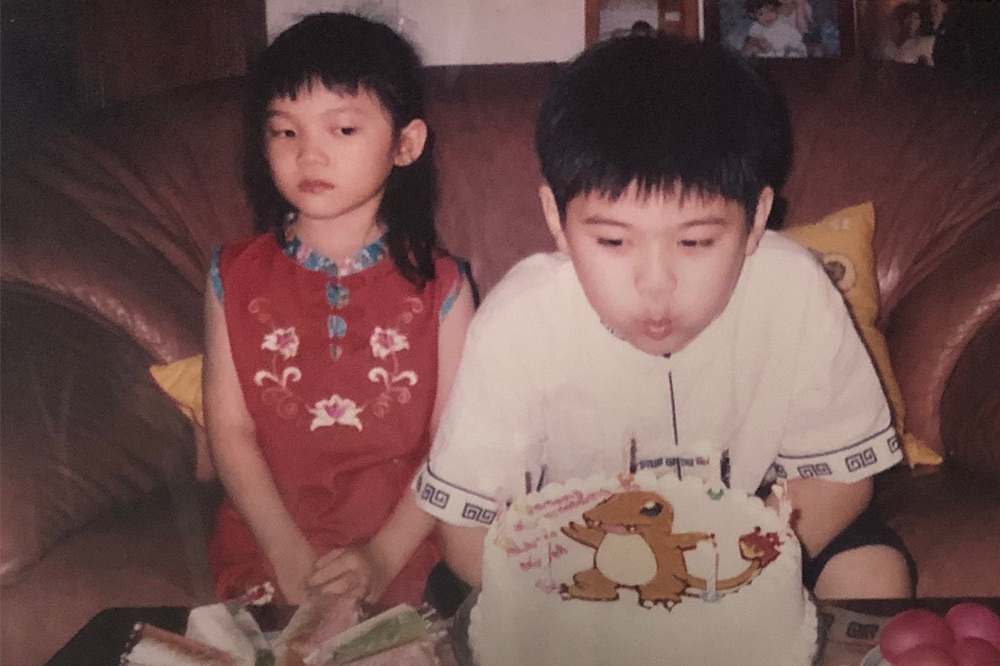 Me refusing to take a photo with my brother, aged 6

In secondary school, I began talking back—a lot. Most of the time, I talked back for the thrill of it and not because I was fighting for some huge cause.

That took a toll on my relationship with my parents, who were already seeing less and less of me because of tuition classes. This was on top of the fact that I was still only seeing them once a week.

Once, over a phone call with my mum, I got so angry over a small issue that I started cussing. My mum simply started sobbing and hung up the phone.

Frustrated, I dived into bed. I was indignant at the outcome of the conversation and wanted to bury my face in my pillow and forget about the world.

However, what greeted me was Chou Chou, with her ever-radiant and unchanging smile.

In that moment, I suddenly realised this was the same doll I had cried to just 5 years back. At 9, I’d wished for my mum’s good health. At 14, I had turned into this rebellious teenager who refuted my mum for a fleeting moment of triumph.

While I didn’t act on my mistakes instantly, Chou Chou’s smile gave me the wake-up call I needed. Her unimposing presence was a reminder that despite how I was growing and changing, my mother was still the same person who loved me regardless.

A Love Letter To Chou Chou

We gave you away when I was 17, to a child in the rural parts of Malaysia, as part of a yearly donation drive.

That was also the age I moved back home, finally residing in the nest that my parents had been building over the years.

Giving you away was one of the biggest decisions I struggled with. Simply because you embodied the warmth from Mum and Dad, particularly Mum. You comforted me in ways no one could, with that perpetual smile on your face.

When the donation drive came around, Mum advised me to give you away, to someone who needed you more. I knew then that it was time to let you, my dearest friend, go.

Thank you Chou Chou, for being my unassuming companion, and for keeping me rooted over the years.

Though you are not physically with me anymore, you will always have a place in my heart.

Alvina is a Netflix junkie and loves sitcoms. When she’s not being a couch potato, chances are that she’s falling asleep.