Singapore girls have one of the smallest breasts in the world with an average cup size of ‘A’. But let’s forget what they used to say about what a ‘real’ woman is or isn’t based on her goods, shall we? It’s pretty clear by now that a woman shouldn’t be defined by the size of her bosoms, or any other physical feature she was born with.

No matter the size, length or elasticity, all breasts are beautiful. But for my flat-chested friends, I feel your struggles on a spiritual level because we all know that boob-enlarging papaya milk Ah Ma told you to drink never quite worked its magic.

1. ‘Is the cup half full or empty’ logic doesn’t apply to us

It’s not easy to come across bras that fit—let alone flatter our body shape—for daily wear.

Lol, do you even know where to buy AA-cups without it looking like our training bras, which I can still fit by the way? I only threw them out for my self-esteem.

And we avoid padless half-cup bras like the plague ‘cause we don’t need support, we need shape. Similar to how we only fit triangle-esque bikinis.

Pro tip: Well-fitted patterns and ruffles are key to adding oomph to your chest. Avoid. Cups. At. All. Costs.

2. We don’t love bralettes the way you think we would 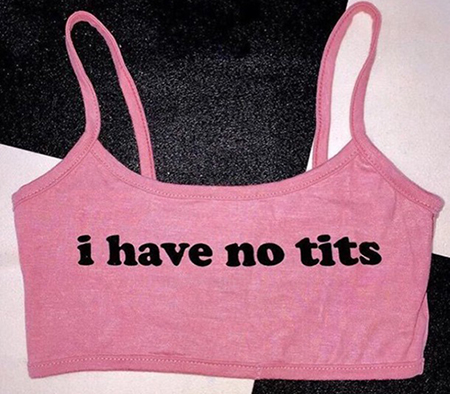 Despite everyone saying we can rock them, real flat-chested girls don’t particularly love bralettes. We don’t want the world to know how truly smoothly a plane could land across our Changi Airport runway chests.

They’d straight up fall off our chests. There’s not a lot for it to stick to, so I’m not about to invest S$80.00 on a stick-on that will undoubtedly fail me.

So hey, if you’ve found a brand of chicken cutlets that accommodates A cups and below, help a sister out and spread the word. Or you could always settle for scotch tape.

Are you kidding me? I’m a beautiful independent Asian woman and I still feel insecure about how a measly male specimen sees my endowments. Okay, chin up, pads up.

And P.S. if you think we’re trying to deceive you by using push-ups, I only have one thing to say to you—eh pls, you think you who?

5. Cleavage is never an option

Plunging necklines are only for the self-indulgent. Because all of us in the itty-bitty titty committee know cleavage just doesn’t happen here.

No matter how hard we push the girls together. It’ll just look unnatural; like we’re trying too hard. Plus, that turkey would need a lot of stuffing.

6. Explicit Hollywood movie scenes are laughable to us

You know, the ones where the confident busty girl makes the first move and takes the guy’s hand, willfully placing it on her breast during a sex scene?

Time to adapt, Hollywood. Not all girls do the hand-to-boob move—wouldn’t be much of a handful for said boob-grabber. Not applicable. I feel personally victimised.

Please, stop the cruelty. I know it may not look like it, but yes I’ve been through puberty TQVM.

8. Our paranoia about “The Gap”

If your breast-esses aren’t fleshy enough to be considered full in all its boobacious glory, you know what “The Gap” is.

It’s that irrational phobia of someone catching your zao geng if you were to bend down at just the right angle. So you best believe we never drop our shit.

Another tip: If the gap is significant, wrong size honey. Try a smaller cup.

Because waiting for you is like waiting for rain in this drought. Useless and disappointing—we say to ourselves regarding our cup size every morning while looking in the mirror buckling our bras.

Some things don’t change—if only that were the condition of my skin after puberty instead of the size of my god-graced grapes.

10. The eventual acceptance that this is as good as it gets 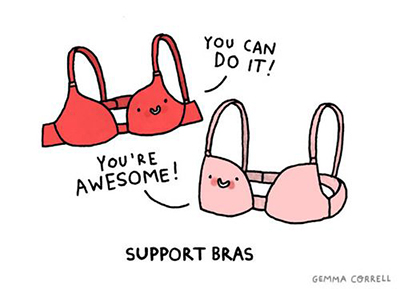 Except, after pregnancy—but not all of us have child-bearing tendencies.

That percentage of the group will never know the post-labour size increment bestowed onto womankind after giving birth. Which pretty much means this is as good as it gets for the rest of our lives.

Might as well love ourselves while we know this. Or have an augmentation done. Hey, your prerogative, no judgment.

All jokes aside, I would like to say as the self-proclaimed president of the itty-bitty titty committee: learn to love your mini wonders.

It doesn’t matter whether you’re as flat as a board or as well-endowed as Kate Upton, self-confidence comes from within. So go on, free the nipple from the chains of societal oppression and love thy body!