Weeks after the first episode of Singapore’s reality dating series One Week Love was aired, the show has been the talk of the town for various reasons. From memorable romantic gestures to cringy pick-up lines, One Week Love also surprisingly captured moments that highlighted gender inequality.

As a society where we strive towards a better and more open future, these moments enlighten us on how Singapore can better improve on our actions and opinions.

1. When Dania said that Brendan has “substance” after opening up Even if you’re an extrovert, it is not easy to open up to a person you’ve just met. So when Dania mentioned that she finally saw “substance” from Brendan after he revealed his insecurities, it did make me raise an eyebrow ‒ they had only known each other for a few days and it seemed a tad too early to judge him.

Plus, based on the conversation they had, Dania did not really reciprocate and contribute her share of HTHT. But giving Dania the benefit of doubt, the producers might have edited away her part of the conversation. Perhaps the reactions would have been far worse if a guy said the same thing about a girl instead. 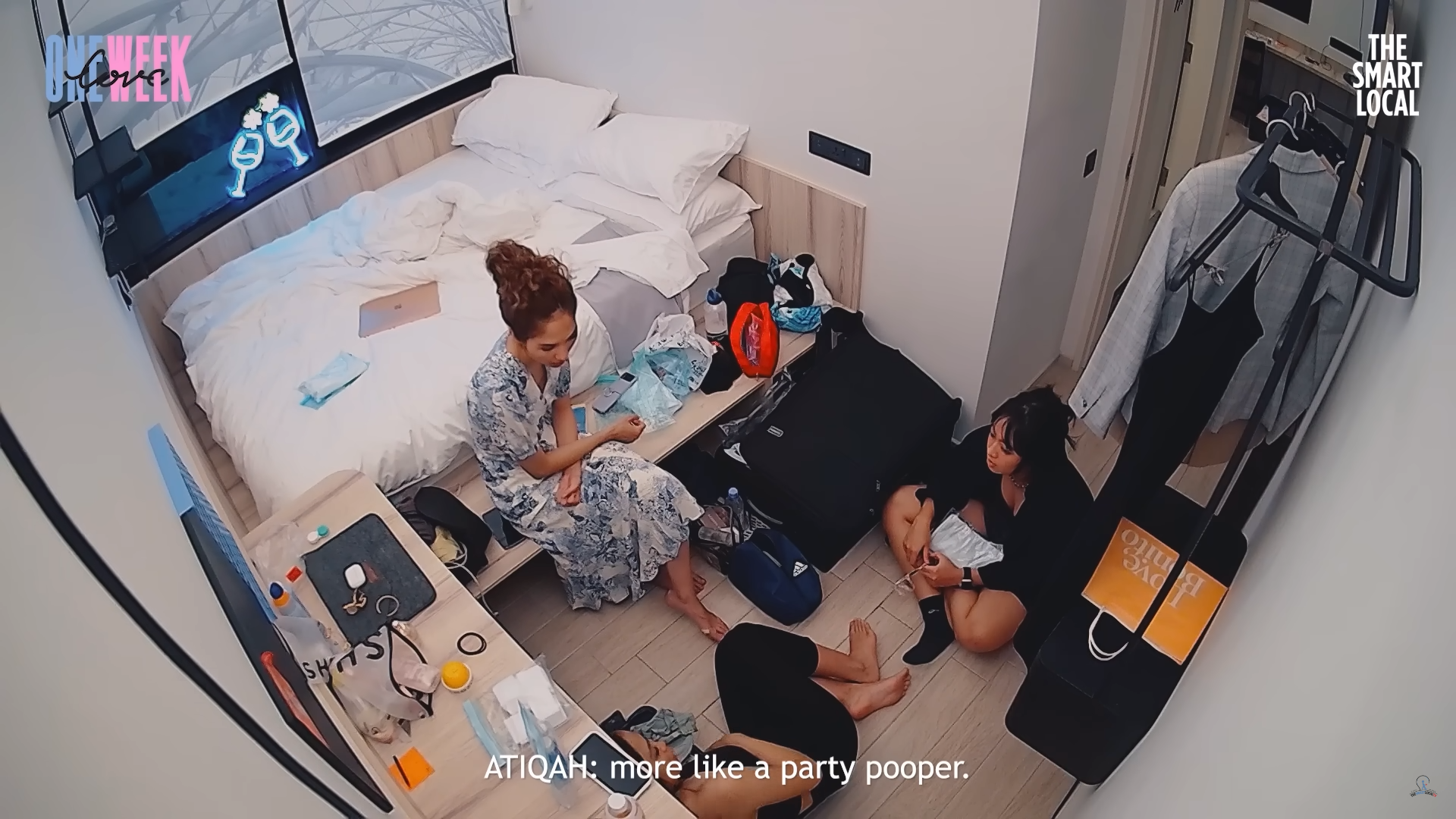 The truth about reality shows is that they capture IRL situations so there are bound to be uncomfortable and awkward moments.

When the cast members of One Week Love gathered to play a game of Truth or Dare, Sam mentioned that he didn’t want to partake in any physical activity ‒ like how Oliver kissed Dione on the cheek ‒ which resulted in many of the girls being taken aback.

While it was nice to see that the cast members respected his choice, Sam’s decision was later judged by Atiqah as she felt he was giving “party pooper vibes”. Her choice of words might have been a lil’ harsh and Atiqah did apologise to Sam, which unfortunately did not make the director’s cut.

3.  Being called ungentlemanly and insensitive after saying the truth 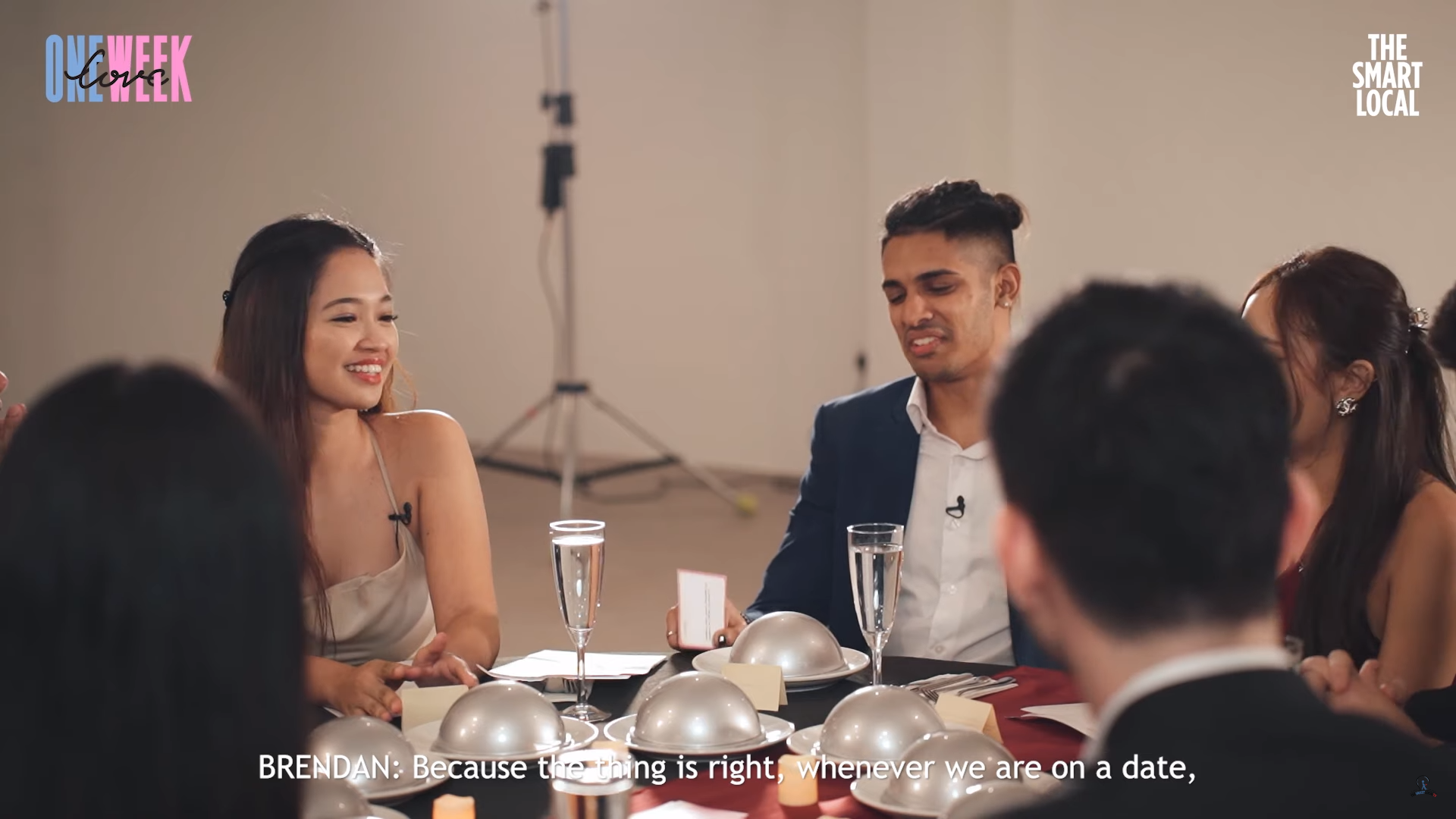 Unfine Dining in Episode 6 was probably the spiciest segment on One Week Love by far, as the cast members had to answer sensitive questions. Brendan, in particular, had to choose a person who he thought was fake in the room.

While he initially planned to avoid drama and choose the punishment instead, Atiqah egged him to say the truth instead. Well, it turned out Atiqah did get her taste of the medicine as Brendan’s answer wasn’t what she expected ‒ Brendan chose her.

His answer definitely shocked the rest of the cast members, and some felt that he shouldn’t have answered it in the first place. This moment definitely resulted in mixed reactions from the viewers as Brendan was just being truthful, but some called him insensitive and ungentlemanly for speaking out. Gender inequality much? You decide.

4. Girls expecting guys to put in more effort in the dating game 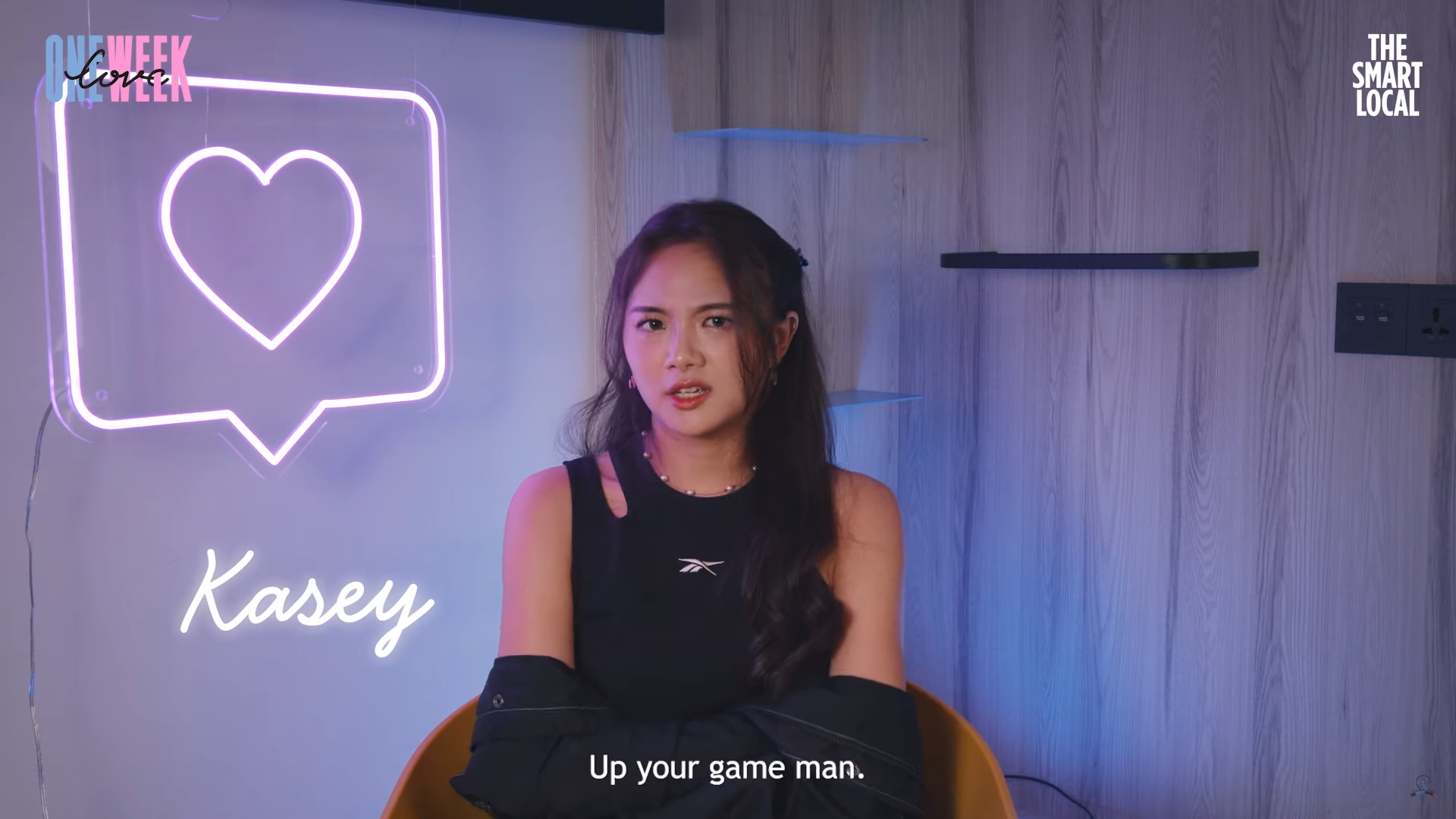 It’s 2022, and guys don’t necessarily have to make the first move anymore when it comes to chasing a person in a relationship.

A couple of moments in the show suggested that some of the girls were expecting the guys to initiate, like how Kasey said that Donovan needed to “up [his] game”. NGL, while the feeling of getting chased does feel good, expressing your feelings towards your love interest also allows you to score brownie points for being confident.

5. Acceptable for girls to initiate the game of guessing the clothes 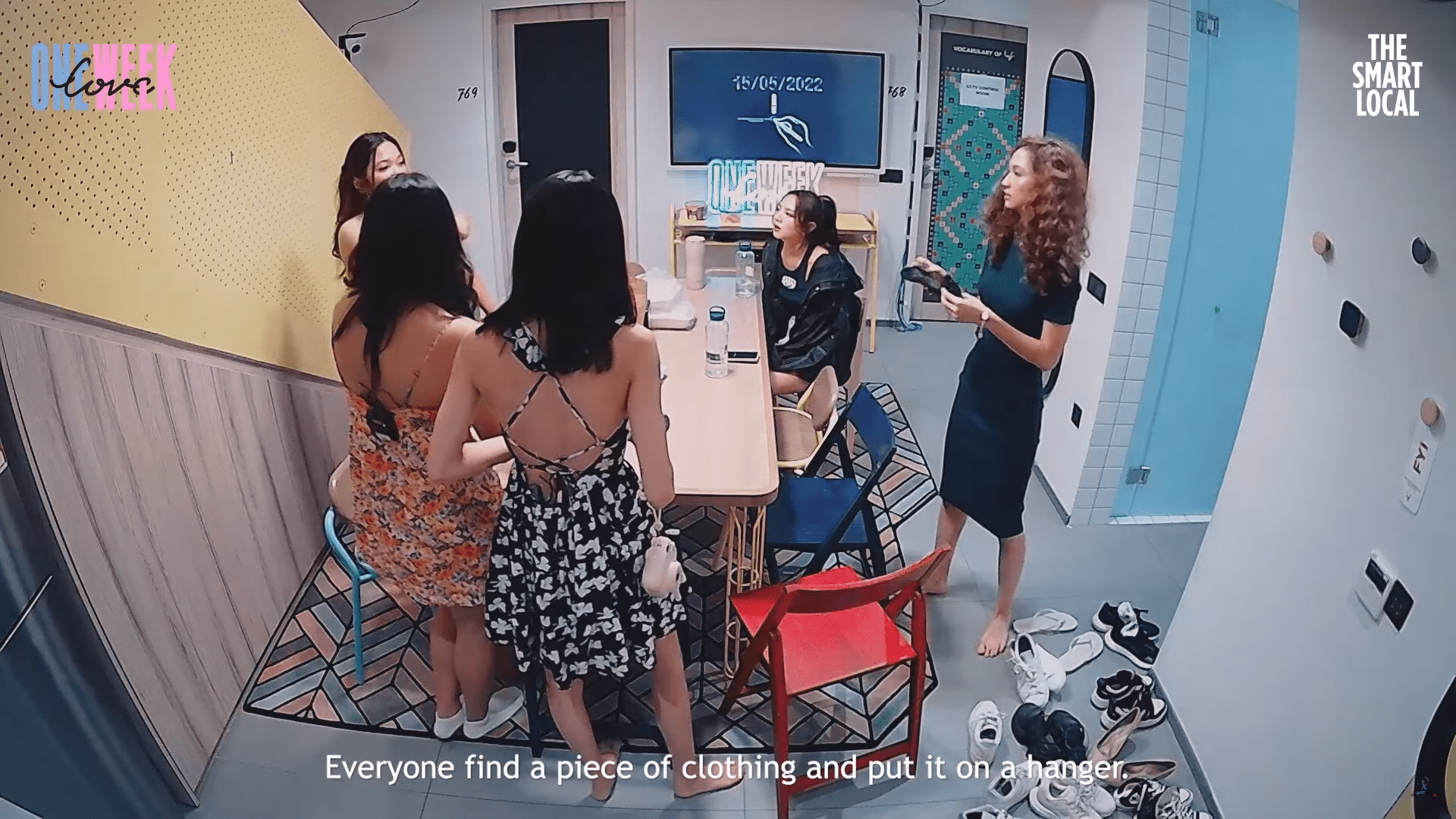 Despite being a modern society, some situations are still deemed “socially acceptable” when girls initiate it, but not with guys.

When the girls decided to play a guessing game with the boys, they considered letting the boys guess either their pyjamas or undergarments before they went with the former. TBH, I doubt the girls would be comfortable if the situation was switched around as they might view the guys as creeps or weirdos.

6. Asking Oliver to “unbutton” his shirt Sure, Oliver has an image of a person who “barely” buttons his shirt since the first episode, but that shouldn’t give others a reason to ask him to unbutton and even remove his shirt.

During Episode 5 when Dania suggested Oliver to “take off his shirt”, the rest of the girls chipped in and jokingly mentioned that he should also unbutton it. If a stranger overheard their conversation without knowing the context, it could have been interpreted as a rather offensive statement.

7. Guys not putting in as much effort as the girls in dressing up 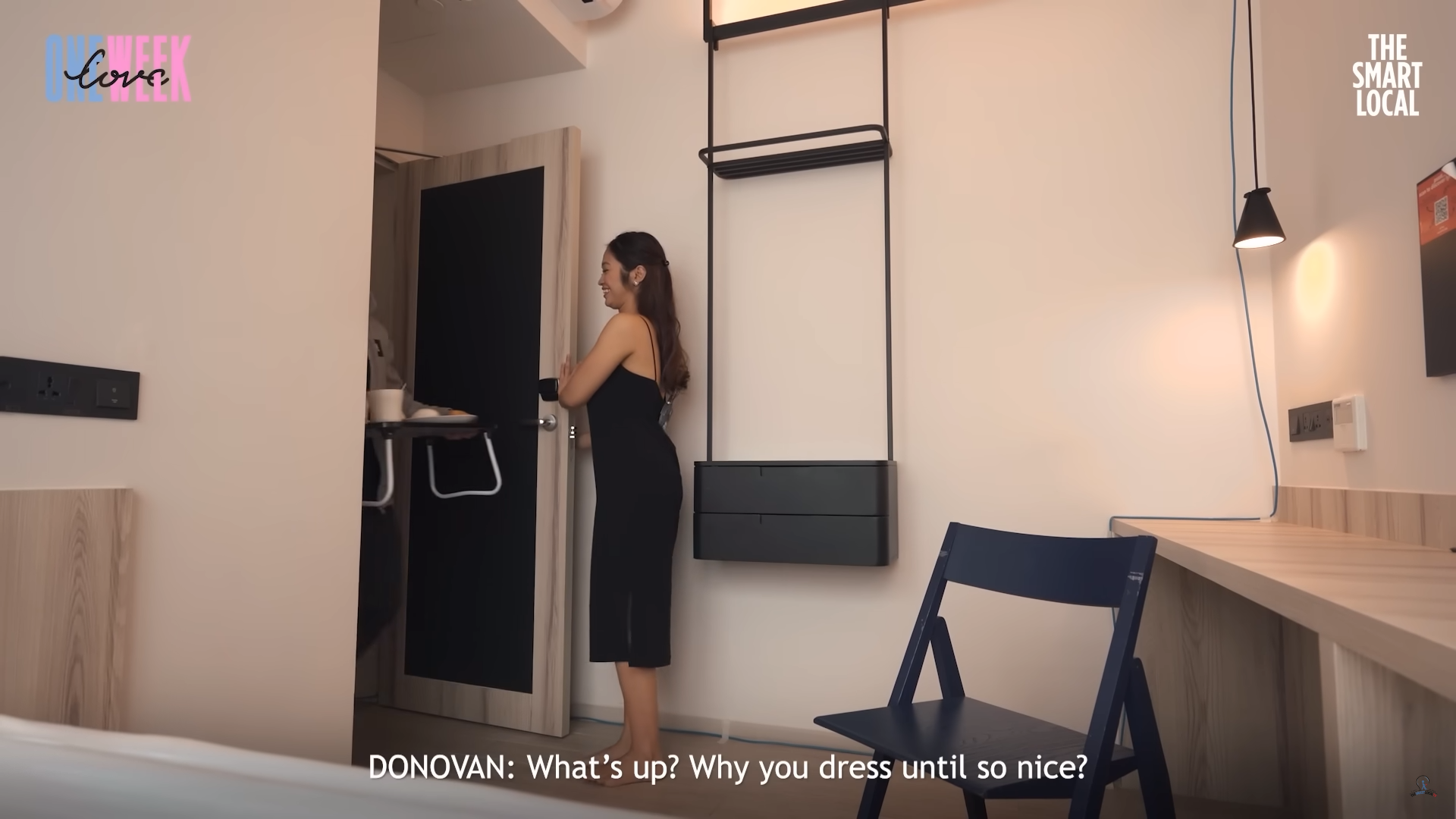 An interesting observation I noticed during the first session of “Coffee, Tea and Me” was that all the girls were dolled up in the early morning ‒ Atiqah was wearing a lovely black dress and Dione looked adorable in her floral print dress. On the other hand, a couple of the guys didn’t put in much effort and came to meet their allocated partners in basic T-shirts and shorts. It seemed as if the girls were all prepared to make an impression whereas the guys were pretty chill about their outfits. While I felt that none of the guys had any ill intentions and only wanted to be comfortable, the moment made me think that some of them might have taken the stereotype of girls having to make more effort for granted.

As much as we are down for the juicy tea and heart-fluttering moments from One Week Love, these moments also show that we can learn a lot about gender inequality. Aside from the drama that comes with a reality series, let us take this as a wake-up call and work towards having better gender equality in our society too.

6 Must-See Moments From One Week Love From Best To Worst, Including Aggressive Flirting Attempts