Stereotypes & Insecurities Of Girls Older Than Their Boyfriends

When we look at relationships with age gaps as an outsider, it’s easy to make assumptions based on our own beliefs. We presume that their personalities might clash, that one might be too good for the other, or that varying life experiences are going to come in between them – and we stick to our judgements till proven otherwise.

We spoke to 6 Singaporean girls older than their partners to see firsthand the difficulties they go through and the false nature of how others stereotype their relationships.

Some names have been altered to protect identities. 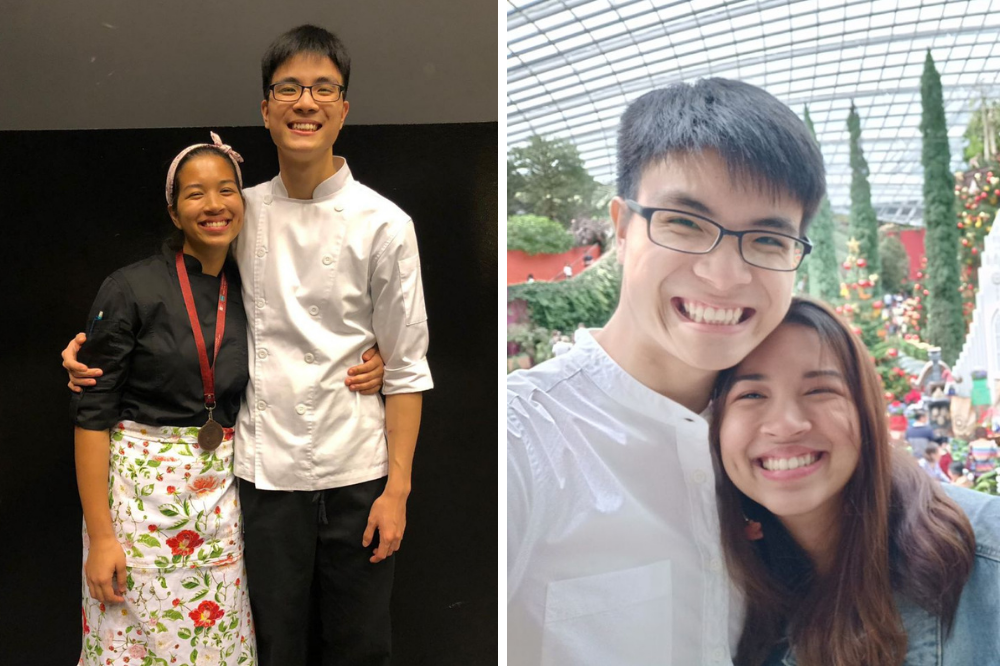 “I met my boyfriend in my second year of poly when we were assigned to be kitchen partners for class. We have an age difference of 4 years.

When we first started dating, I was worried about how others would view the relationship because I was dating someone who was much younger than me. Initially, when I told my mum about the relationship, she said it wasn’t right and that it was a sin – that made me question if I was actually doing something wrong.

But after she started getting to know my boyfriend, she became more understanding and now she adores him and treats him very well.

As my boyfriend is someone who’s very level-headed, he also doesn’t let others’ opinions affect him at all. We had a discussion about our age gap and how we both felt about it very early into the relationship. We ultimately came to the conclusion that age is just a number – our maturity level was more important than the age gap.

At the start, my cousins would say stuff like “cradle snatcher” and “sugar mummy”, but they were only said as a joke. These are extremely false labels anyway. In fact, my boyfriend and I tend to divide our expenses equally.

Luckily, these comments don’t affect our relationship and I don’t really get upset over them. Sometimes, my boyfriend and I will even laugh and joke about such comments.

Having a supportive and understanding boyfriend helps a lot too. I’m able to voice out my concerns to him and he’s always helping to calm me down and change my perspective of the situation – this really keeps me from feeling insecure. I know it’s cliché but communicating openly with your partner really helps to ease any issues.

As long as both of you are happy and comfortable with each other, other people’s opinions won’t matter or hurt as much.”

2. “I used to be insecure that he would meet someone else and leave” – 7 years apart 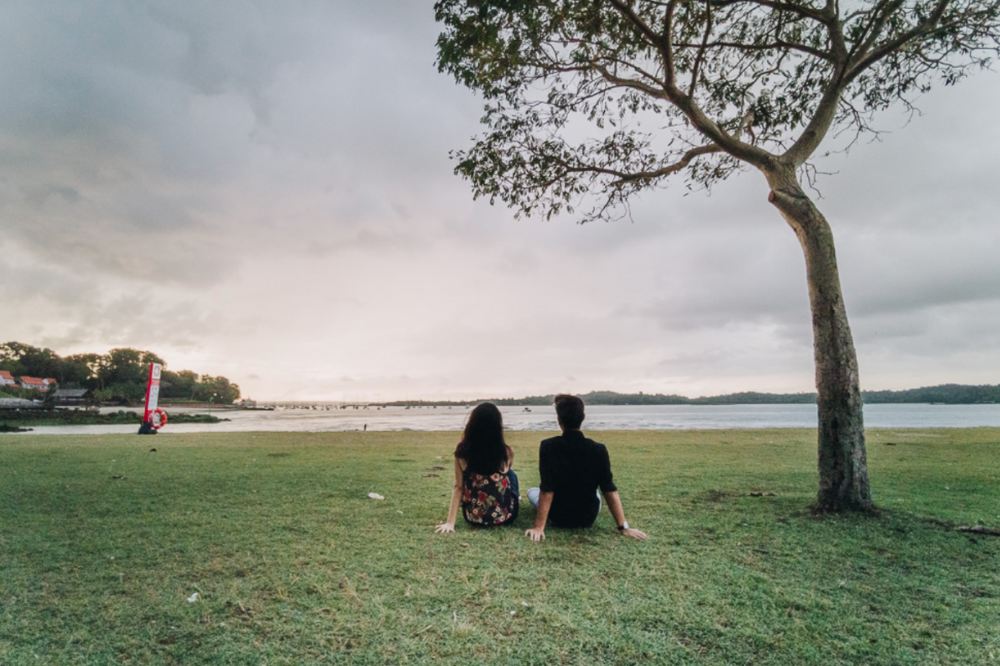 At the start, when I told family and friends about my relationship, they had their reservations and were sceptical about how we would work out. But by spending more time together and showing them that there isn’t much of a difference, they can now tell that the age gap isn’t an issue.

I did, at a certain point in time, feel that maybe since he’s younger, he needs to get out and have more fun before settling down. So I used to always have this insecurity that he may just meet someone new and leave.

Aside from that, I’ve heard stereotypes like how it’s hard to have a future because we’re at different life stages and that it’s tough to have financial stability while waiting for the guy to earn. While this made me feel uncertain at first, we’ve had talks about it and established that this won’t affect us, before we even got together.

You can’t change how people think or what they believe, but if I could speak to them I’d tell them that every relationship is different. Ultimately it’s down to the two individuals to make things work and that’s not based on what we see on TV or have heard from others.

Always remember that you’re the one in the relationship, so don’t let others influence how you feel or what you should do. But of course, if it’s very obvious that your partner isn’t great for you, please listen to your friends and family before you make a decision. 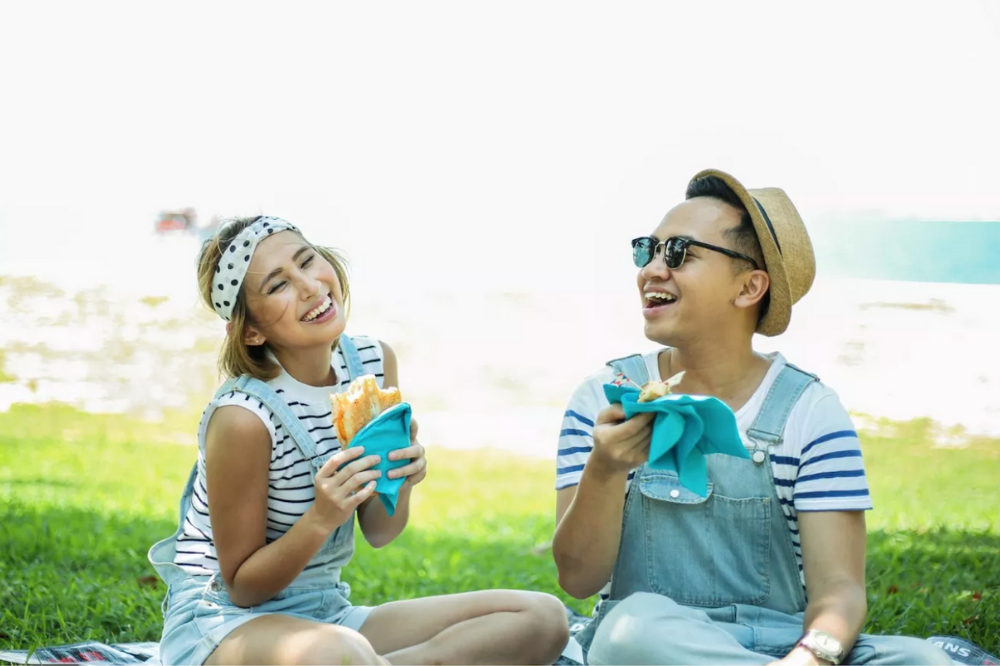 “We dated for 3 years and have been married for another 3 so that’s 6 years altogether. I got to know him through another guy that I was dating at the time – he kind of snatched me over from that dude.

To be honest, we don’t really feel the age gap when we’re hanging out. The only problem is that I am going to hit the big 3 soon and we still don’t have children. I can’t help but feel old whenever we talk about this. But to him, he’s still young and not quite ready yet, so he tends to simply pretend our disagreements over the issue don’t happen.

Some of the stereotypes I always hear are “aren’t younger guys immature” or “girls are already 2 years ahead in mindset with guys the same age, so doesn’t being older make it even more glaring for you?”. Additionally, friends and family always say that he’s so young.

But really, I think that even when we reach our 40s, he’d still be seen as a young kid in their eyes. It honestly doesn’t feel good hearing all these assumptions. I mean, the relationship should be about the couple and not other people. Their opinions only make us upset and stir up unnecessary fights.

These days we just ignore them and let the naysayers nay. We’re no longer interested in proving people wrong. After all, it’s only us two that matters in the relationship.”

4. “He’ll be studying for another 3 years after I’ve already graduated” – 1 year apart 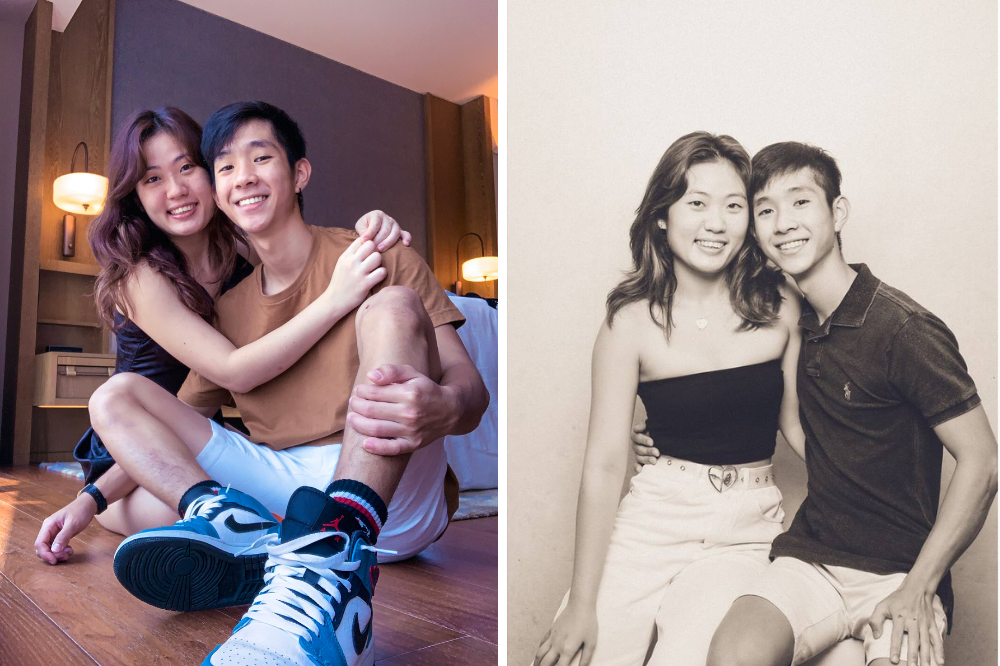 “We met in a climbing gym and started talking from there. Now we’ve been together for about 1.5 years.

Honestly, right off the bat, I think that being older allowed me to help him with his university matriculation processes and course selection. For me, personally, when I didn’t have anyone to guide me I was really lost, so I guess that’s a perk, for him.

In terms of hardships, it’s probably just the fact that he’ll still be studying for another 3 years after I’ve already graduated. But, I just tell myself that the 3 years will pass by quickly anyway. After all, there’s no rush since we’re still young.

Some people also assume that we are either the same age or in the same year in uni, but when I tell them that he’s a year younger they’ll ask “Oh…not weird meh?”. Why do they need to have that sort of opinion about a relationship that isn’t theirs? But I do get that it’s not that common.

After all, when it comes to our age difference, we never cared in the first place.” 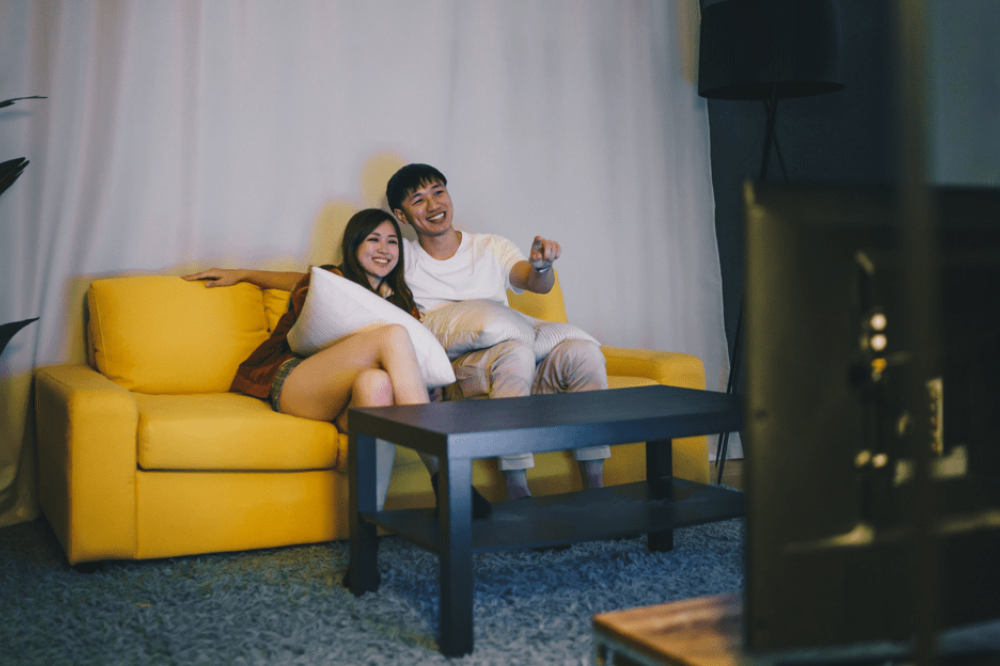 “We met through a mutual friend and while we are exactly 11 months apart, I am in a later stage of life than he is. I’m currently working my first full-time job while he’s still in university because he had to serve NS.

I faced a lot of negative family opinions about our relationship in the beginning, because while dating someone younger is more accepted by my generation, that’s not the case for the older folks.

Another concern I have is us being in different stages of life. Girls usually want to settle down earlier than guys, so the guy being younger can be tough. As my boyfriend is still studying and I’m already working – when we plan to get married, apply for BTO and start a family are all things we still have to discuss.

This is especially since I just started making a stable income and he probably won’t reach the same point until he graduates, which is still a few years away. But I’m glad my boyfriend wants to settle down with me and takes our relationship seriously even though he’s younger.

A stereotype I often hear is that I’m a sugar mommy, which is honestly not that false since I’ve started working and I’m able to spend more on my boyfriend, like getting him the food he wants every now and then. We love eating good food together so I feel very happy doing so – I enjoy taking care of my partner.

I think more people are accepting of a girl being older in the relationship nowadays, so even hearing such comments, I know that they’re just meant to be a joke. So the comments don’t affect our relationship at all.

There’s a quote that goes “it’s you and your partner against the problem, not you against your partner” – and I live by that. You should trust your instincts on the relationship and really communicate with your partner because they’re not mind readers at the end of the day.

The world is a different place than it was years ago, so age really doesn’t matter as long as both of you are happy. Just do you and work things out together.” 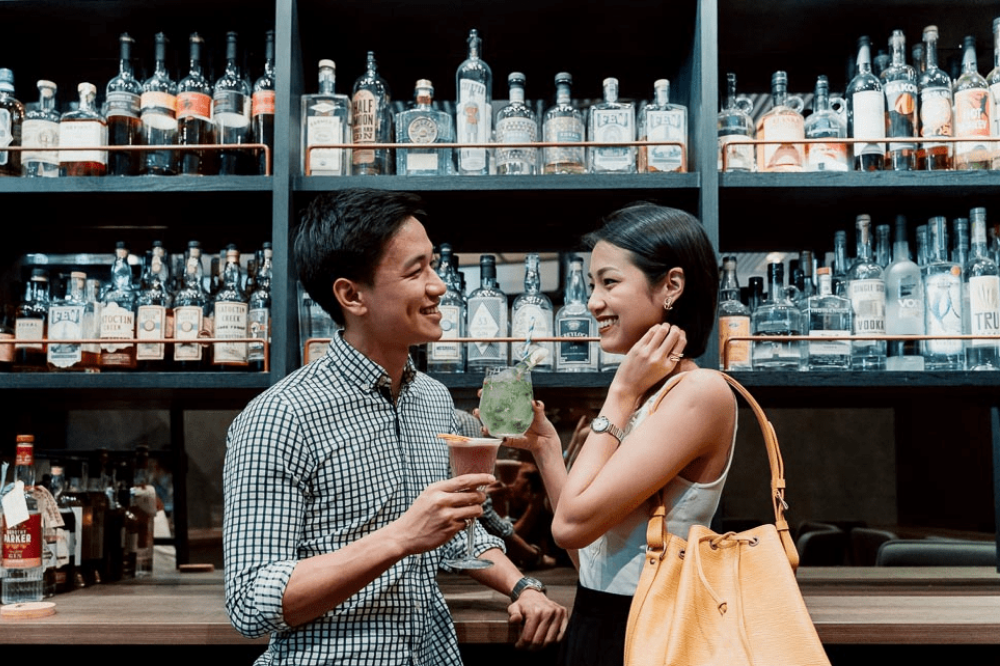 “I’ve been in my current relationship for 3.5 years and we met at a mutual friend’s birthday party.

Being the older one allows me to be more understanding in the relationship, but frankly, the only time I really feel the age difference is when we’re dealing with more serious stuff like family matters. However, this is partly because we come from very different family backgrounds, so I can’t really blame his age for that.

The only insecurity I have about being older than my boyfriend is probably the ageing part. What if I age faster than him? But, this doesn’t affect our relationship at all because my boyfriend is really good at reassuring me and telling me that I don’t look older. In fact, I actually do look younger than him.

My family and friends are very supportive. I think the most common rumour I hear is that the boyfriend is too immature for the girlfriend due to age difference. I sort of agree but, I think that’s part of growing together as a couple. People shouldn’t judge so quickly and just let the couple settle their differences on their own.

Age really doesn’t make a difference, especially in the long run. If you feel happy being with that someone, just follow your heart and work out any differences along the way. Don’t let age stop you, or at least don’t let it be the reason why you reject someone who could be your potential soul mate.”

These Singaporean Girls Prove That Age Isn’t Everything

Being in a relationship is already difficult on its own, but these girls have to cope with a whole snafu of other issues that are added by external prejudice and judgement from others. But hey, if anything, they show us that when it comes to love, age is really just a number.

As long as you’re willing to work through the hard times and savour the good moments in the relationship together, everything can and will be a-okay.

Responses have been edited for brevity and clarity
Cover: Laura Martens, Megan