Lessons From A HDB Rubbish Collector

Since young, I was told that bin-digging garang gunis and cardboard collectors were poor people who recycled items for extra cash. That their hunchbacks and wrinkled hands were from scavenging through rubbish dumps after they had ‘gone senile’.

As a result, Poor Cardboard Auntie was a moniker I gave an old lady who lived in my neighbourhood. For over 12 years, I watched her rummage through bin after bin—first with quick strides, then a slow hobble.

Even when her spine curved, she never stopped trawling the bins in her two-piece grandma pyjamas. Most times, I could recognise her from afar by her floral lilac shirt and shiny white hair trimmed to a pixie cut.

I remember our brief encounter on the eve of Chinese New Year. At 9.00pm, the streets were unusually silent apart from faint laughter that echoed from nearby apartments, where families gathered for their reunion dinners.

On my way home, I saw her digging trash and offered her a red packet and green tea. She said thank you, and that guan yin ma would bless me.

In response, I asked her if she had eaten because my broken mother tongue couldn’t find better words to break the awkward silence.

That was last time I saw Cardboard Aunty for months, until a few nights ago. 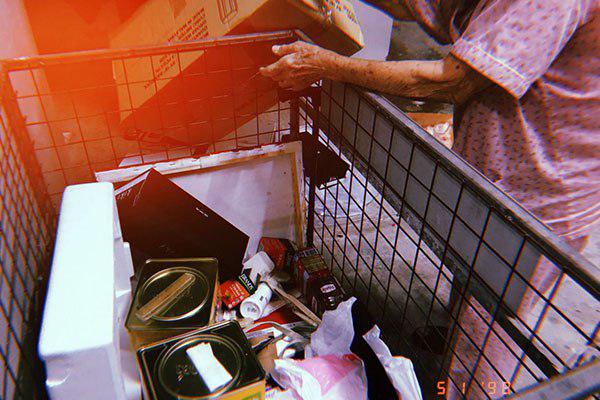 I was on my usual route home when I saw her hunched over the bin, doling out items and stuffing them into plastic bags. When I offered to carry them, she looked at me in surprise and murmured, “Ah? Hao ah, xie xie. (Sure, thank you).”

Up close, I noticed how tiny and frail her limbs were. She was probably 150cm tall with kind, glassy eyes.

Beside me, there was a white plastic bag secured with a double knot to hold pieces of cardboard and paper she had compressed in the bag. Funny, I thought. What could you earn with torn paper? But I picked up the bag anyway, and she pointed me towards the recycling bin.

Then, she whispered to me to hold the heavy lid up so she could place the bags inside.

“I see them…” she trailed off. “You put rubbish in the small recycling bin, they throw away with normal rubbish.”

For a moment, she reminded me of my grandma who used to tell me in a hushed voice, to sneak sweets in my pocket when no one was looking.

“I want to save them, so I separate recyclable rubbish and put them into the big bin,” she explained.

With eyes wide opened, she then pointed to the rubbish bin centre nearby, and stuttered, “Ta men… hui shao de (They will burn it)!” before lapsing into silence.

And in that momentary pause, I realised that for all these years, Poor Cardboard Aunty never dug bins for herself. And that ‘poor’ was a word that money can never fully quantify.

Cardboard Aunty was no billionaire philanthropist, but she was able to inspire me to cultivate better everyday habits. To take less than what I receive, and to appreciate what I take.

In our first-world society, we’re conditioned to measure happiness and success with dollar bills. We then use dollar bills to buy things we hardly use to please people we barely like.

But if we stop in our tracks to be more mindful of the present moment, we might find something special in ordinary things, moments, and perhaps people too.

Now, every time we cross paths I ask her if she needs help, or tell her I’m happy to see her. Sometimes, I ask her why’s she digging trash at 1.00am, and she says, “Oh? 1? So fast already?”

I realised she doesn’t always remember me, nor the time. But I hope this story holds onto hers a little longer. Because it’s the least I can do to return the favour of teaching me the value of things that money can’t buy, even if I can only reply in broken Mandarin.