Life of An Overseas Teacher

Earlier this year, I discovered a potentially cancerous growth in my gallbladder and I had to put my ESL teaching on hold. A part of me felt devastated as I was only at the start of living my dream as an overseas teacher but a larger part of me felt perfectly fine if I was to be diagnosed with cancer since I’m living a purposeful life.

It may seem “unrealistic” to drop everything in Singapore and live out of a suitcase but I believe in this saying, “Don’t tell me the world is dangerous, teach me how to protect myself.”

I grew up in a humble family with the familiar philosophy—study hard, get the certificates, wear nice clothes and work in an office. With the philosophy ingrained into my mind, I embarked on the journey of paper-chasing and participated in that rat race, thinking that education and material possessions equated to joy.

As a child, I couldn’t afford overseas excursions and a trip to the Singapore Zoo was a luxury. I’d read stories that talked about the joy of giving and return abandoned NTUC Fairprice trolleys to the supermarket, as a silly act of kindness.

I wasn’t academically smart and I used to think I was hopeless because of my horrendous PSLE score. However, In Pasir Ris Crest Secondary School, I met the best teachers who motivated me. In 2004, I was one of the top O’ Level scorers in my school and even won the Prom Queen title. 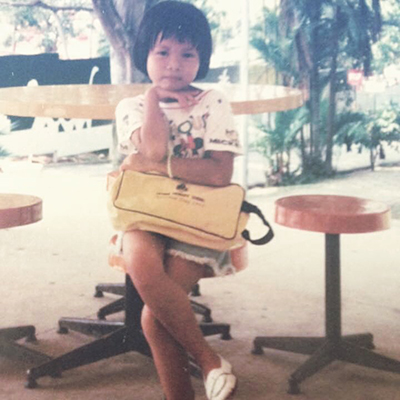 I then studied Law (Diploma Level) and Accountancy (Degree) since they were deemed as “successful” career options. Although it ended up being meaningless to me, it helped me discover my passion for volunteering.

Why I became an overseas teacher

While I volunteered at a crisis shelter in Singapore, I helped victims of domestic violence with their studies. But on the dusty streets of Bangkok, I witnessed children begging in their school uniforms and felt powerless until I realised that education was the key to turning poverty around. Yes, they cannot change their current circumstances overnight but they are in power to change their own lives.

As a Singaporean, I’m lucky to be bilingual and to have grown up in a multicultural environment. Learning a foreign language is more than just about conversing; it’s appreciating and understanding the different cultures. So to share my blessings with others, I quit my desk job, gave up a comfortable salary, and embarked on a journey as an ESL Teacher overseas and locally (at the moment).

Although I’m earning far less now, I’m happier. More importantly, I’m on a journey to learn about living more and owning less. Travelling and overseas teaching reminded me that life is far too valuable to waste on chasing material possessions.

I was about to join a voluntary organisation to teach English to Buddhist Monks in Bangkok, when a friend gave me an opportunity to teach in Xi’an, China. As far as I remembered, I’d less than a month to attend the interviews, pack my bags, and start my overseas teaching stint. I’d never been to China, let alone Xi’an; a second tiered city. 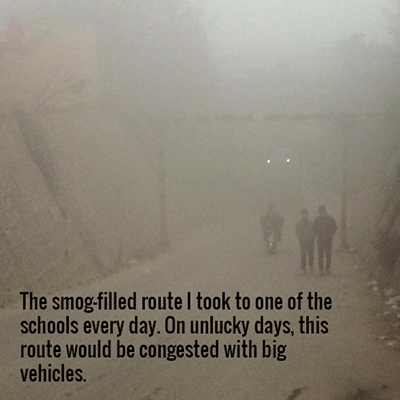 I stayed in a 1-room flat in a somewhat ghetto area where fights were commonplace but it was still a relatively safe area in the day.

The first week in Xi’an, I had no electricity and water heater—even stable Wi-Fi was a luxury. It was winter and I’ll never forget the ‘fun’ of showering in the freezing cold water and relying on candles/my phone as the only source of light. I also had to collect drinkable water near my flat on a daily basis.

In a city like Xi’an, you’re considered lucky if there’s a helpline to address such issues, or a kind technician/soul (normally a random uncle carrying a toolbox) to help you with the household repairs. Thankfully, I was able to enjoy the electricity and hot water after the second week but it’s a common occurrence to live without such utilities. Nonetheless, they made me appreciate the things we take for granted back home. 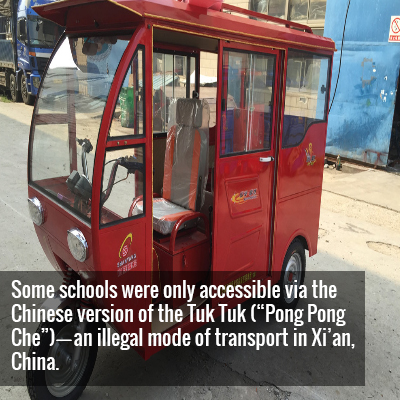 Life in the classroom

In China, children only start to learn Basic English at 9 years old and the class size is an average of 60 students. Despite not knowing the language well, their zest for learning inspired me as I saw how much they valued their education.

Being of a petite build, my abilities were initially questioned, as I did not seem physically intimidating enough to discipline the classes. However, I took this in good stride and told them that I can mix with the students better because of my height. I never saw my petite build as an obstacle because it’s the genuine exchanges that win the students’ hearts, not the dominance. 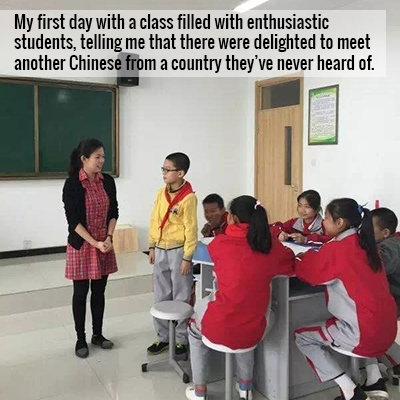 Due to the severe smog in Xi’an, I had frequent fevers and nasal infections. However, I couldn’t afford to take medical leave as I was the only overseas teacher for the 3 schools and there was a lack of GP clinics there.

More than that, I couldn’t leave my generous students who showered me with their hugs and precious snacks. Despite being sick, their love and enthusiasm to learn made the 2-hour travelling time in the cold for a 35-minute class worth it. 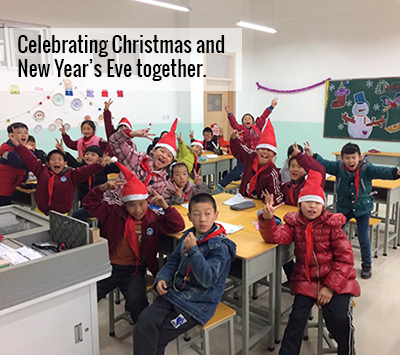 Trust me when I say that people can see and feel your hard work. I was given the chance to plan my students’ Christmas performance in 2016 to showcase their English abilities to their parents and the school. I remade and combined the fairy tales of “Snow White and the Seven Dwarfs” and “Little Red Riding Hood”, where the ending had no prince charming to the rescue or happily ever after, but genuine friendships made.

During one rehearsal, a local teacher pulled me aside and told me to replace an introverted student of mine as she felt that she was not up for it. I politely rejected the ‘recommendation’ as that student punctually came for all the rehearsals and tried her best to deliver her role. Guess what? On the actual day of performance, she was the student who received the most praises for her acting. 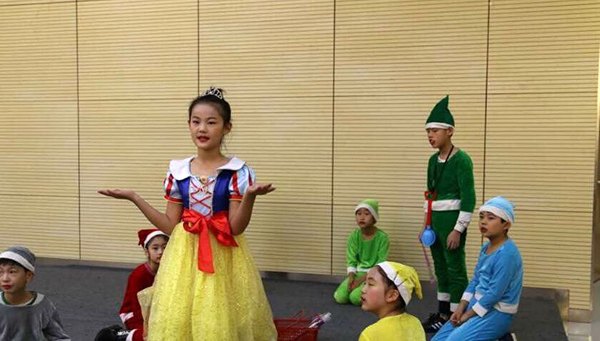 Adapting to life in Xi’an

The fastest and easiest way to adapt to the life overseas is to hang out with the locals over the local street fare. I also had to read a lot of Chinese books to improve in Mandarin.

Xi’an isn’t a popular tourist spot so you’ll rarely spot foreigners in their local communities. Hence, I’d normally initiate conversations with the locals and street vendors. Taking the public transport was also one of the fastest ways I adapted to the city. 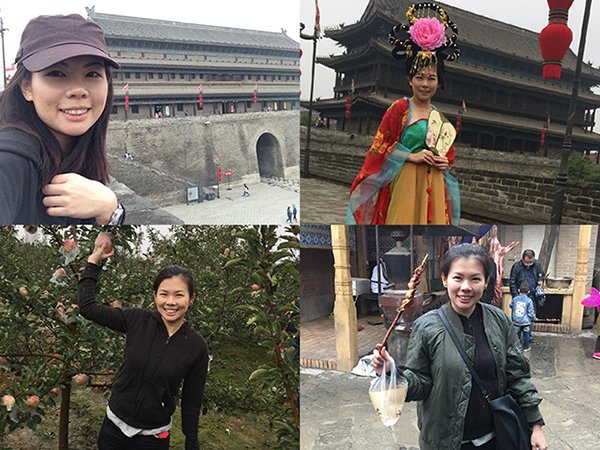 Here I am happy with my mutton skewer despite being drenched in the rain as I was at an apple farm before this. Now I understand the whole fuss about China Apples after tasting it right off the apple trees.

Tip: Ask the locals about the places to avoid instead of where are the tourist places.

Solo travelling teaches you to be responsible for your own safety. For instance, I took up martial arts at Gracie JiuJitsu after I met a flasher at an abandoned village. Shouting for help was futile so I was lucky that he did not harm or chase after me when I walked away calmly. I saw how my recklessness almost put me in a dangerous position.

The best thing about Jiu-Jitsu is that they embrace female empowerment. The Gi (uniform) used in Jiu-Jitsu even comes in pink and purple with floral designs! 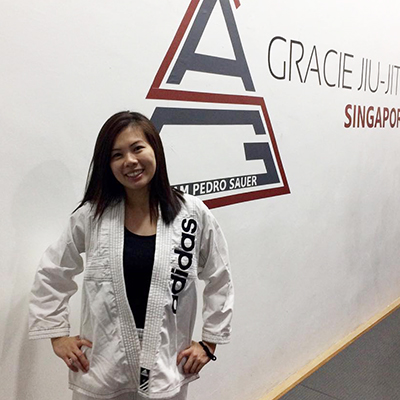 Early this year, I joined the Workaway platform in Bangkok. I had free accommodation with a Thai Family for two weeks and in exchange, I taught their son, Island. As it’s my ultimate goal to teach in Thailand, this Workaway program was a great opportunity to understand their education system first. My duties included fetching Island from school and even attending one of the Parents’ Teachers Meeting on my host’s behalf.

Island is a whiz kid in Science and aspires to be a commercial pilot one day. He sang the song, “I believe I can fly” to me every day, hoping to meet a pilot someday.

One day, I met this beautiful stranger, a young pilot named Kris, who shared a similar background as Island. It was like seeing Island all grown up. Kris agreed to speak to Island after hearing my desire to help Island achieve his dreams, despite not knowing me at all.

It was being part of this conversation that once again I was reminded of the beauty of impacting lives through small acts of kindness. During this period of time, I was also at a crossroad in life because of the growth in my gallbladder. I was contemplating on whether to give up on my dream as an overseas teacher or not, with the possibility of Island being my last student. 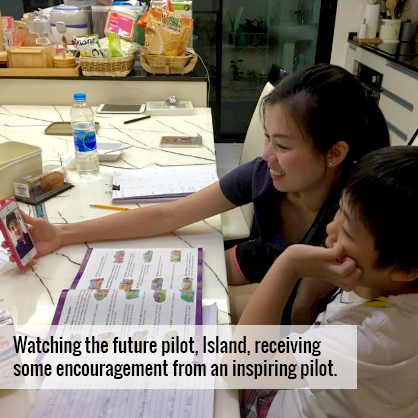 I met another beautiful stranger who actually gifted me a BTS train card when he knew of my dream to teach in Thailand. Solo travelling teaches you the skill of talking to strangers especially when we are all raised not to talk to strangers.

Living within a local community helped me to pick up the Thai language better. Soon enough, I was able to go around asking “Tao Rai (how much?)” and appreciating the “Mai Bpen Rai” culture.

While I may not be exceptionally qualified, these are some of the myths revolved around overseas teachings based on my personal experiences.

It’s a job, not a vacation.

You’ll walk into a class with students looking confused because learning a foreign language can be frustrating at times. Expect complete silence while you attempt to teach a foreign language to the class. Overseas teaching involves creativity and you need to be culturally sensitive while delivering the lessons.

2. You need to be a Native English Speaker to teach English (focusing on the education scene in Thailand)

While this career is dominated by the native English speakers (western teachers from the UK, USA, Canada, NZ, Australia and even South Africa), you just need to work harder to distinguish yourself. There are schools that focus on personality and passion over teaching experiences. Learn to talk to people about your aspirations and goals.

Take up the TEFL qualifications at reputable institutions as it’s the gateway to achieving your overseas dream. Thereafter, join the TEFL community and you may be teaching at some of the most exotic destinations in the world. Even if you do not meet the basic requirement of having a degree, you can also try voluntary teaching overseas.

Currently, I’m juggling two jobs in Singapore due to my health condition while saving a boatload of cash so that I can continue with my dream of teaching in Thailand. I’m glad to be a part-time ESL teacher teaching English as a second language to the Japanese students studying in Singapore.

As a woman, I often hear comments such as, “You run like a girl,” or “It’s dangerous for girls to…”. Fear is instilled in girls since young but I hope that through my stories, you will embrace the fear of the unknown. Fear is the best teacher to guide you through misadventures.

Thank you ZULA for having this platform specifically for the ladies. Like what the name ZULA means, I hope every lady out there will stay brilliant and progressive.

This article was contributed by ZULA reader, Gynn.