Be it cutting off a creeper or hard-core friendzoning your “buddy”, we’ve all used a trick or two to skillfully Tai Chi your way out of plans. But whatever reasons girls have, sometimes guys just don’t get it when girls politely reject them—and they deserve to know.

Here are 11 signs to tell that maybe she’s just not that into you because rescheduling for the 10th time isn’t going to make a difference, bro.

Presenting one of the greatest hits off the polite rejection album: “Oh I’m really busy ATM!!”

She may sound like she’s juggling two jobs, cleaning the entire house, bringing her grandma to the clinic while trying to save the world at the same time. But mostly, she just wants to do other things. By herself. Without you.

Whenever you ask her to hang, she pulls the “maybe next time” card. If she does this more than 28724 times, accept your fate that tomorrow will never come.

What she says: UGH my mum says I can’t go, sigh. What to do? Have fun for me k!
What she means: It’s not so bad if my mum rejects you right? Right.

Playing the ‘mum’ card never fails because no matter what it’s her house, her rules…or at least that’s what you say. Girls who use this excuse run the risk of being labelled a “Mummy’s Girl”, but it’s worth the free pass out of any dreaded plans.

The only thing worse than cancelling is when the girl agrees to hang but ends up being a no-show because she was “asleep”.

To be fair, she might have been asleep once or twice—but to oversleep for lunch, dinner and those late night movie plans? Something’s up. Unless you’re courting Snorlax, she’s probably not into you. 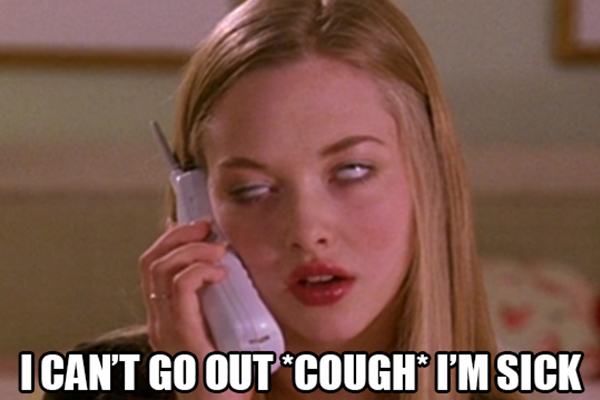 Another tell-tale sign that you’ve been politely rejected by a girl is when she suddenly claims to have “fallen ill”. To cement the lie she might even post a snap/insta-story with some dark background captioned: can’t believe I fell sick #dying #saded. Talk about trust issues.

We get it, girls have a million and one things to keep up with these days, but no one is that busy. If they agree to meet up but cancel on you the last minute, 4 out of 5 times in a row, just take the hint man.

As if they didn’t know they had to take their cat to the vet or rush that very important work-related thing. And don’t bother buying her a day planner—she doesn’t need one, trust us.

What she says: “OMG my phone died! I’m so sorry!! It’s a bit late now, I just meet you next time ok?”
What she means: “OMG I can’t possibly tell him I’m sick again. I’ll just turn my phone off, forever.”

When she’s finally tired of playing nice, she’ll let her frustration show very subtly by saying, “you asking again ah…?”. True, this is a hella passive-aggressive approach, but sometimes it’s just too difficult to say “no”.

There’s no “right time” to reject someone, but she’s just not in the mood to do it right now. So she hits you with an “I confirm again k?” and proceeds to “forget” about it.

We know she might have gotten your hopes up. But the truth is, if she can’t give you an answer for something as simple as a meal, or offer a better day to reschedule, she’s probably not interested.

10. And no matter what, she’s one step ahead of your plans.

She might not show it, but she’s a master strategist. If you think you’ve got a way around her, oh boy, you’re sadly mistaken.

Scenario 1:
You: Do you want to watch X-men?
Her: Oh sorry, I watched it already.

Scenario 2:
You: Do you wanna go to this event on Saturday with me?
Her: Oh sorry, I don’t like crowds. *but proceeds to post 50 pictures at Zouk*
You: Then how about we go on weekdays?
Her: Oh sorry, but I’m working.

Although some girls try to be diplomatic to avoid hurting others’ feelings, sometimes being straight up may just be the better option. But if that isn’t happening, you just gotta stay woke, bro.

being rejected by a girl, signs of rejection, signs you're being politely rejected