Four years ago, Singaporean singers Marc Than and Hashy Yusof found love in the most unlikely place—on a reality singing competition (The Final One, 2013). But it wasn’t the typical kind of love one might expect to find on the big screen.

Their 10-year age gap drew criticism from both their parents and netizens. Some felt the pair were also an unlikely match. “Someone tweeted how can a princess like Hashy date someone so boncet (big bellied),” Marc tells me with a laugh.

To everyone’s surprise, Hashy revealed she was the one who made the first move. “I’ll say it first…I chased him.”

“Yeah, she chased and fell for me. But she didn’t just fall in love, she also fell on stage on national television!” he quips.

Hashy grins at that memory but her smile drops as her gaze moves toward her knees.

In a sombre voice, Marc says, “Sometimes Hashy can’t feel her legs, she can’t tell if her legs are tired.”

Since The Final One aired, Hashy began to suffer from backaches which her family attributed to that fateful fall. But when the pain persisted, her father persuaded her to undergo an MRI scan in late 2016.

It was then they discovered she had Astrocytoma, a condition which causes a tumour growth inside her spinal cord.

“Our first doctor told us in a nonchalant manner that it was a matter of time before she’d be 100% permanently paralysed,” Marc says. “It was as if her life didn’t matter.”

With this information, Marc made plans to convert his house into a wheelchair-friendly place for Hashy using the money he had set aside for their future home. “Whatever her parents and I had to do, we would do.”

Though Marc prepared for the worst, he still desperately sought treatment for Hashy.

Reviewing her charts, Dr Goh was confident Hashy would make an optimistic recovery after surgical intervention. However, he mentioned that the surgery would not guarantee a 100% success rate.

With a leap of faith, Hashy took the risk and went under the knife. 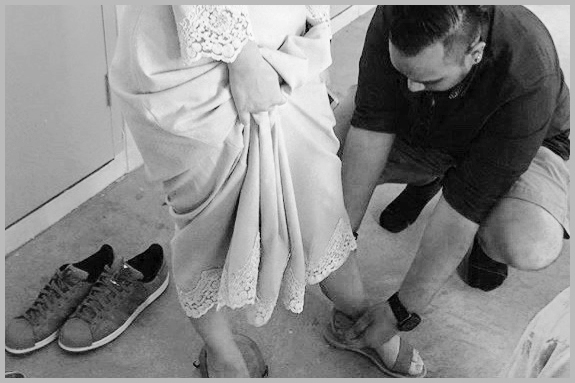 Before surgery: Marc helping Hashy wear her shoes when it was too painful for her to bend her back.

After a successful 9-hour surgery, 50% of the tumour was extracted.

Though there was no guarantee that the tumour wouldn’t grow, it was contained, and that was enough to give Hashy a sense of hope.

Yet, the road to recovery was far from easy.

Hashy couldn’t walk so Marc took care of her needs. Throughout her post-op depression and anxiety attacks, Marc stayed by her side.

“She was pissed off because she gained 12kg due to the steroids and couldn’t fit into her dresses!” Marc rants. “She was angry with herself. But she was determined. Even when the physiotherapist came in, she insisted on moving around on her own.”

Hashy describes how walking, an action we usually take for granted, became a tremendously difficult task. “My brain would tell my right leg to step forward, but I’d step backwards. What made it worse was how much the wound hurt. It didn’t help that I’m allergic to painkillers.”

But learning to walk again wasn’t her only concern. In 2015, Marc was diagnosed with heart complications and she was worried about not being able to take care of him in the future.

Turning her fear into courage, Hashy pushed herself during her physiotherapy sessions—she would learn to walk again. 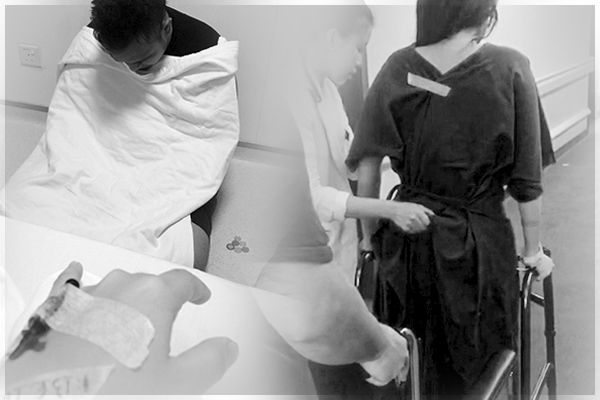 Every day, Hashy would send Marc videos of her taking baby steps. And within weeks, she surprised doctors with a recovery they predicted would’ve taken months.

Having been through thick and thin, Hashy and Marc agree that they just want an uncomplicated life. They’re simple folks, they tell me. When they’re not singing at gigs and weddings, they’re staying home and watching documentaries.

I can’t help but wonder: What’s the secret to maintaining such a loving relationship?

“Relationships aren’t easy, you’ve got to be straight up with each other. Girls think they have to play games or guys will get bored. Truth is, if you play games, he’ll get frustrated. If he wants to leave, he’ll leave whether you play or not,” Marc advises.

Hashy chimes in, “We also take turns to talk during fights. We can’t be angry at the same time. We’ll also remind each other that we’re both on the same team.”

“Can you say yes already so I can stand up?”

Through this period, not once did Marc falter from his decision to marry Hashy. In December 2016, Marc attempted to propose in Shinjuku, Japan—twice.

“It was going great initially: I bought her flowers, we took a walk and we had really good steak. After that, I brought her to Shinjuku Garden because Google said they had nice night lights. However, it was closed at 4.30pm.”

“So the next day, I made up some story and brought her to a beautiful bridge instead. I thought it would be romantic to propose there because we were stepping into a new life together and bridging the gap between past and present,” Marc recalls.

With his new-found Shakespearean analogy, he tricked her into holding a GoPro camera and snuck behind her to get on one knee.

But little did he expect Hashy’s reaction: she looked at him and started laughing. “I asked him, ‘Eh, what you doing ah?’”

For a good 30 seconds, Marc remained on one knee and begged Hashy to say ‘yes’ so he could stand up. Thankfully, she did. “Any longer and my knee would go stiff lah,” Marc laughs.

From Reality TV to Reality. I tricked her into videoing us with the GoPro at Shinjuku Gyoen . 🙂 . #Proposal #Engaged #Mxh #MarcXHashy #igsg

In Sickness and In Health

Lifelong partners often settle into complacency after the honeymoon period is over. But until now, Hashy fondly talks about how Marc still “courts her”. Every now and then, he’ll surprise her with flowers and notes of appreciation.

There’s a quote that goes: “If you treat her the way you did in the beginning, there will be no end” and Hashy agrees. “Of course it’s not easy to keep up with the big gestures but it’s the small ones that truly matter.”

Their constant teasing of each other also reflects how laughter is the best medicine. To them, love is simply making your partner look forward to tomorrow even on days you won’t, or literally can’t get out of bed.