Hardcore punk often brings to mind angsty, violent teens dressed in black, moshing in a poorly-lit basement while a band screams incomprehensibly in the background.

But meeting the four-piece all-girl hardcore band, Radigals, you wouldn’t think any of them were into punk. Dressed in a mishmash of floral prints with nude makeup, Aisyah, Esty, Alin and Cheryl are soft-spoken, introverted and hella chill.

Yet, some people still shun them. “There were boys who rejected me because they didn’t like I was into punk. Now, the guys I date are all in the punk scene so there’s an understanding,” says Esty.

“It’s easy to judge people who seem different and there are many (punk) misconceptions as told by the media,” Aisyah adds.

So if there are negative impressions of the punk scene, why still choose punk music?

Why punk is more than just ‘angsty music’

Blink 182 and Simple Plan were pioneer mainstream punk bands that introduced the girls to punk music. But it was only in secondary school when the girls started to actively participate in the scene.

“Growing up, many teenagers feel lonely, sad or angry or want to rebel against their parents. Punk music gets us because it’s relatable,” says Cheryl.

“The music is good to dance and vent. It’s a positive outlet. You can push people around but it’s a contained aggression—no one gets hurt.”

Esty corrects me, “A misconception about punk is that we’re anti-social. But actually, the punk scene is inclusive, social and close-knit. People make you feel like you belong and we don’t judge each other.”

“Even though we come from different backgrounds, we relate to the songs because a lot of us go through the same issues at home and with friends.”

Apart from helping them find a supportive community of like-minded people, their ‘angsty music’ also gives them a voice to raise awareness for social problems: racial discrimination, unemployment rates, rising costs of living and sexism.

However, their music does take on a more cheerful note. Radigals also write songs about body-positivity, self-acceptance and female empowerment.

“We want to motivate girls to be more positive and confident about themselves and not be afraid to do things,” says Alin. Being a girl in the male-dominated punk scene

The hardcore and punk scenes are dominated by men and while most treat women as equals, some men are disrespectful.

Esty shares, “Most people are nice but there are some guys who say girls cannot pit, or you cannot play guitar or drums; your voice is too high to be a vocalist; you’re not good enough and to get out of the gig venue because you ‘suck’.”

Nodding in agreement, Aisyah adds, “If they feel we’re playing the song wrong, they will try to explain to us how to play it correctly. Maybe they look at us and say ‘oh girls don’t do that well’ so they ‘need’ to help.”

When asked if male bands face the same problems, the girls solemnly shake their heads.

“It could be because we’re girls,” Alin pipes, “One time, we posted a band photo on Facebook and someone commented ‘thick thighs’ and ‘hippopotamus’ in Malay. There are other guy bands whose members are bigger sized and no one says anything. “

On top of the double standards they face when performing their music, they have to deal with sexual harassment on stage.

Aisyah shares an incident where she felt violated while performing. “During our gig at the Aliwal Arts Centre, there was this guy who stood near my legs, and put his face into my crotch when I was singing.” 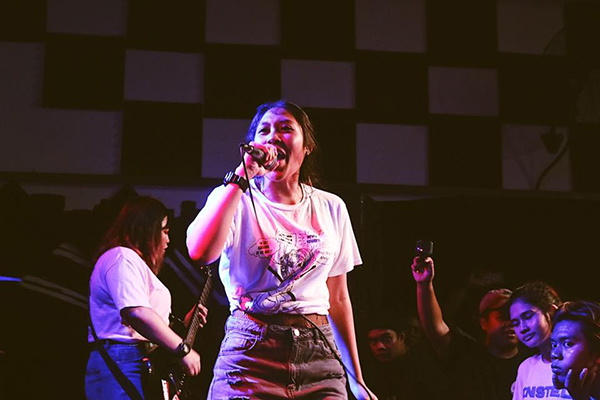 However, the girls are quick to condemn the actions of these men as “going against the values of punk” and emphasised these practices are far and few between. They repeatedly mention how punk is about unity and lifting up fellow members.

Alin says, “Many girls go through some sexual harassment and objectification, that’s why we write lyrics on how men view and restrict women.”

“Being different pushes you to be more confident. If you’re a majority (men in punk) you’re usually unaware of the problems the minority (women in punk) faces,” she adds.

While it’s clear Radigals are successful and love what they’re doing, they don’t see themselves playing for a long time.

“We’ll probably keep going for another two years,” Alin says. “As we get older, there will be more responsibilities like work, marriage, and children. Maybe we’ll take a break and play again when we’re older.”

Being part of the female minority within the punk/hardcore subculture, it’s important to see female bands front the stage.

Not only does their presence set an example and normalise the idea of girl hardcore bands, it validates and gives the female voice power to address issues which otherwise goes unnoticed.

Till then, they’ll be making music and spreading their message of strength and encouraging their audience to ‘fight to unite’. 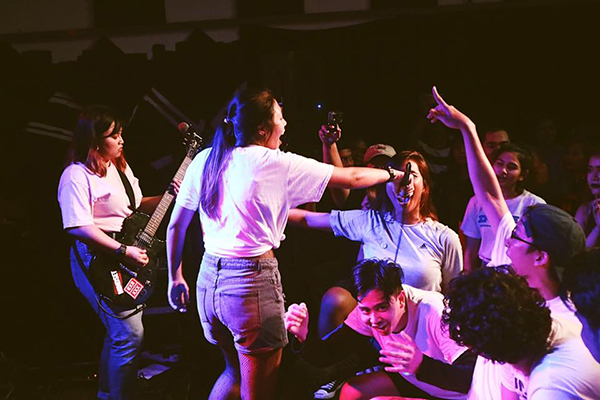 If you’d like to listen to more of their music, you can check out their EP on Bandcamp.