Last week, a flood of black squares took over Instagram in support of #blackouttuesday. At first, I assumed they were being posted by the U.S.-based accounts I follow. But a quick scroll showed that many were also being shared by fellow Singaporeans. In the midst of a global pandemic, it’s great that we are not being apathetic. At the same time, it was impossible not to ask: where is the same groundswell of support regarding issues about racism in Singapore?

Black Lives Matter vs Not In My Backyard 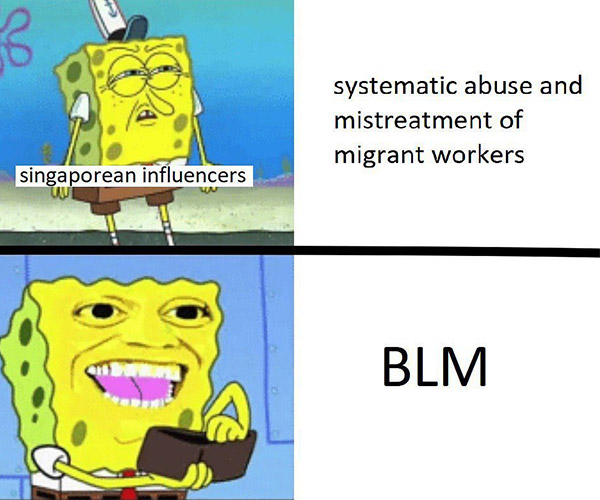 To spread the word about a monumental movement is well and good. But to do so while ignoring the racism in your own backyard is not. With the ongoing conversations about migrant workers in Singapore during COVID-19, the stark difference between Singaporeans’ takes on the 2 issues could not be more apparent.

Many who had shown solidarity for Black Lives Matter were silent, for example, when it came to addressing the xenophobic Not In My Backyard comments following the Ministry of Manpower’s announcement that new workers’ dormitories were going to be built, including some near residential areas.

The thing about confronting racism at home is that it takes a lot more than uploading an image and typing out a hashtag. It requires a sense of awareness, humility, empathy, courage and persistence. Even after the topic is no longer trending, the work continues.

For those wondering how to take your activism beyond a hashtag, here are some baby steps you can follow. If it sounds like hard work, it is. But don’t be put off. Because this is a cause worth fighting for. 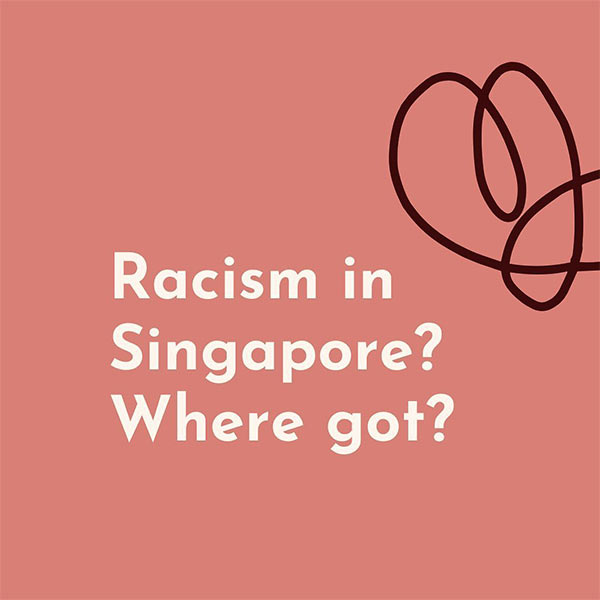 If you’re a Chinese Singaporean reading this, the first step is to recognise and acknowledge your privilege.

The first step is often the hardest. “Privilege is invisible to those who have it,” they say. This applies to racism, sexism, ageism and other isms too. The common thread is that the majority group is lucky enough not to realise that they have been at an advantage this whole time, thanks to existing systems, policies and prejudices.

In a 2016 survey on race relations in Singapore, 49% of Chinese respondents strongly agreed or agreed that being of the majority race is an advantage in Singapore. This is compared to over 60% of Malays, Indians and Others. The results reinforce the idea that majority privilege is more apparent to those from minority races than the majority group themselves.

Only when you accept that racism and Chinese privilege do exist, can you get started on the process of understanding and fighting racism in Singapore.

2. Think before you speak

Newsflash: Adding a disclaimer does not negate the rest of your sentence. In fact, it only shows that you do believe there is some truth to the stereotype you’re perpetuating.

The same is true for the following scenario. You repeat a stereotype in a conversation with someone of another race. When they react negatively to it, you say, “Chill lah, it’s just a joke.” 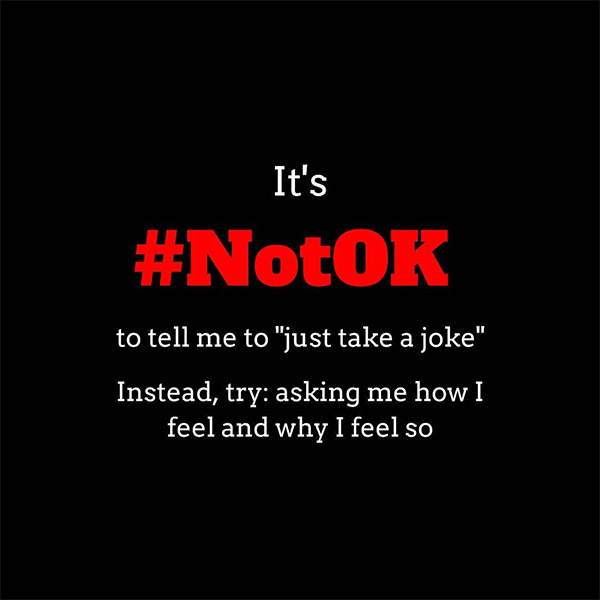 The next time you find yourself reaching for a tired racial trope, stop and think about why you wanted to say it. Do you truly agree with and believe in the sentiment? Does it apply to actual human beings you know? Or is it just something you’ve internalised without giving it a second thought?

Because this “joke” does not come across as funny to another person who might be at the table. One whom you didn’t realise would be affected because “you don’t see colour”.

Life Growing Up As An Indian Muslim Girl in Singapore

3. Be aware of everyday racial microaggressions

It’s not just about overtly racist comments and actions. Racial microaggressions are just as insidious. 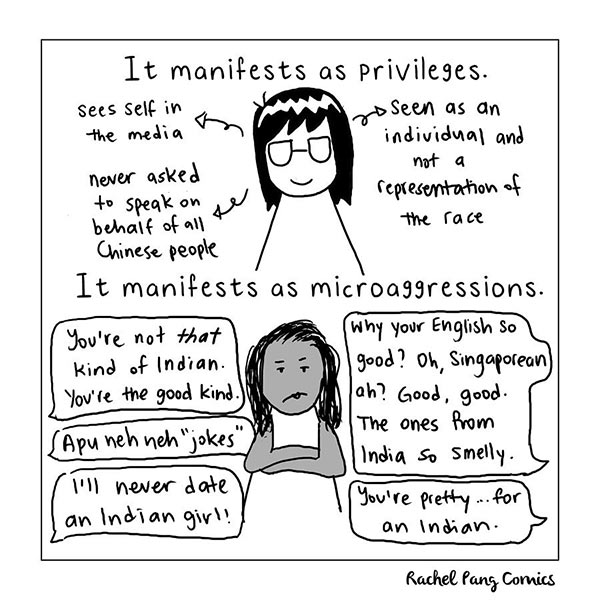 Ask anyone from a minority group in Singapore, and they’ll be able to share countless instances of racial microaggressions that take place every day, everywhere. Say you’re having a meeting. Someone starts speaking in Mandarin, ignoring the fact that certain members don’t understand the language and are now effectively left out of the discussion. Or you’re deciding where to go for lunch and don’t take into consideration the dietary restrictions of everyone in the group. 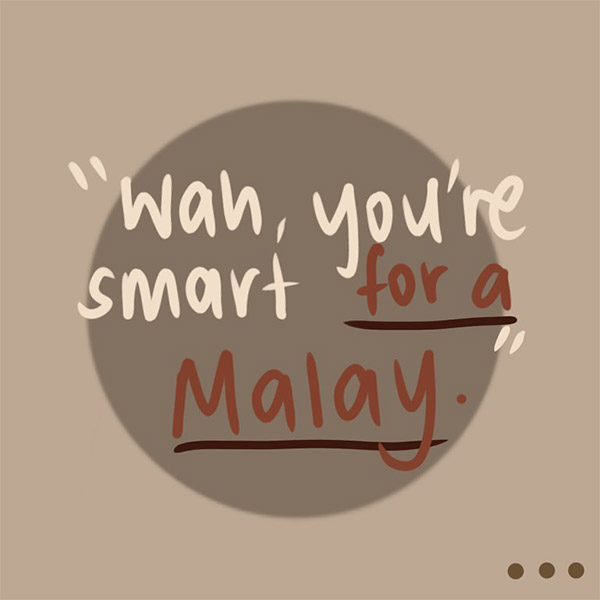 As a person with a majority privilege, racial microaggressions are the exclusionary, derogatory and prejudiced things you say or do against another race, be it intentional or unintentional. Sometimes, they can even be masked as compliments. Put yourself in the other person’s shoes and think about how you would react if you were on the receiving end of these situations. Imagine if you were told, “Wow… you speak really well for a *insert race here*,” or “No, but where are you from, really?”

There’s a reason why many Chinese Singaporeans only realise they have been on the receiving end of Chinese privilege since birth after returning from extended work or school stints overseas. When you are blissfully unaware of the significance behind these seemingly trivial acts or statements, you don’t understand that you are committing a racial microaggression. Take the time to educate yourself on what constitutes racial microaggressions. This way, you can ensure that you’re never unknowingly guilty of saying or doing them again, and you can address these microaggressions when those in your own circle commit them.

4. Speak up when family and friends make racist comments

No matter what kind of advocacy work you’re doing, one of the most important things you can do is to speak up—on social media, at school, at work and at home. Speak up, for example, when elderly family members express discriminatory sentiments because it’s behind closed doors. 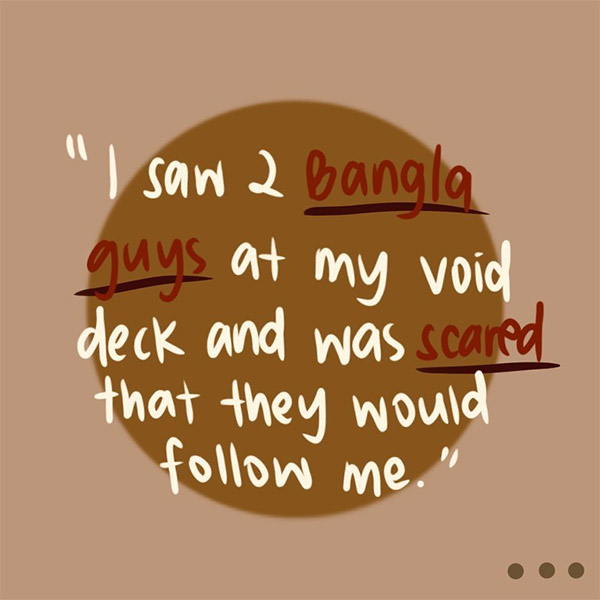 Generations of Singaporeans have internalised the stereotypes and prejudices that have been drummed into us since we were kids. But ignorance is something that can be combated. Politely explain to them in private why it is not ok to make generalisations about an entire race. Again, if the roles were reversed, how would they feel? Illustrate to them how even if they didn’t mean to offend anyone, their statement has a negative impact. Even if no one from that race is present, they are passing down these prejudices to younger members of the family.

If you’re from a minority group, you’re probably exhausted from being confronted by racist remarks and microaggressions your entire life. Personally, as a mixed-race Singaporean, I’ve been on the receiving end of problematic comments and questions about my ethnicity, skin colour, religion and the like for years. They could be from friends, extended family, teachers, co-workers or even random people on the street. Each time, I’m struck silent out of disbelief and sheer tiredness. Like, it’s 2020. How have we not moved past this already?

But I recognise that my silence has also made me complicit. By not speaking up, I’m reinforcing the idea to those around me that is ok to say or do these things.

Whatever your skin colour, now is the time to speak up in the face of discrimination. It can only be a good thing.

So many others in Singapore and around the world have been hard at work putting together useful anti-racism documents. A quick Google search will unveil an extensive list of resources to help broaden your perspective. We’re still stuck at home with nothing to do besides consume content. So what better time than now to better yourself?

The Instagram accounts highlighted in this article are great places to start if you’re looking for bite-size, easily digestible information to dip your toes into the issue. Read books by local and Asian authors such as Balli Kaur Jaswal’s Sugarbread, Melissa de Silva’s Others Is Not a Race, Hidayah Amin’s Malay Weddings Don’t Cost $50, AWARE’s Growing Up Perempuan, and MD Sharif Uddin’s Stranger to Myself: The Diary of a Bangaldeshi in Singapore.

Watch TED Talks, put on Netflix shows and listen to podcasts. Subscribe to newsletters like Race Tuition Centre. Follow Facebook pages of advocacy groups in Singapore, including Transient Workers Count Too and HOME: Humanitarian Organisation for Migration Economics. After that, donate money, time and effort to these community organisations if you can afford to do so.

The Black Lives Matter movement has opened up global conversations about race and systemic racism. It is important to stand in solidarity with the protests going on in the U.S. But it is just as important to acknowledge that racism exists in Singapore too. Hopefully, this article will serve as a guide on how to be an active anti-racist ally.

10 Struggles Of Growing Up Eurasian In Singapore