Things have been going rather well in your new relationship and you catch yourself fantasizing about walking down the aisle with him.

Once in awhile, you get into small tiffs that could potentially blow up into something bigger. However, you understand keeping a cool head is important to keep things going smoothly.

But you can’t help but wonder, do these cracks signal something bubbling below the surface? Or should you just sweep it away in the name of compromise?

We gather the girlfriends to find out what are some warning signs one should heed to reconsider our relationships.

1. He is verbally abusive to his mum

Observe how he treats his mum because when you’re married, he’ll most likely treat you the same. Mum is usually the one who does the chores and takes care of him when he is sick; she’s the one who loves him unconditionally.

When you get married, you will likely take her place. Does he take for granted those who care for him the most?

2. He won’t let you meet his friends

When relationships get serious, guys will usually introduce their girlfriends to his friends. But if he’s been keeping you a secret, consider: you might not be the number one in his life.

Might his friends know his missus to be somebody else? Or maybe he just doesn’t think you’re important enough to integrate into his friend group.

If you are keen to meet his friends, he should allow you to, otherwise it is quite shady.

3. He no longer prioritises you

A skill we must all learn while adulting is to juggle family, work, and friendships.

It is uncomfortable when you find yourself slipping down his priority list. Perhaps, he just enrolled in University and needs more time to adjust with his new friends.

Cheryl, 24, learnt that men and women manage time differently, so it is important to discuss your priorities and schedules.

If you no longer feel number one, it’s high time to discuss whether a break can help both of you reconfigure what is important in your lives.

4. He has differing long-term goals from you

A lady related to me that her ex was happy enough to have a roof over his head, while she was unhappy just to get by.

Relationships require aligning your life goals with your partner’s. This includes whether you want kids, how much each of you should contribute financially and how to handle both your in-laws.

If you find yourselves unable to reconcile your goals, you will likely drift apart.

No matter how great the chemistry is at first, being together is about long-term sustainability. Find someone who can match your pace in life.

5. He isn’t liked by your friends

Birds of a feather, flock together. If you’re surrounded by genuine people, your friends would 10/10 want to like your partner and will make the effort to do so. Even if they don’t like him, they’ll be neutral.

But if all your friends can’t vibe with the BF, you should listen to what they have to say. Their third party perspective could point out bad habits that love has blinded.

Unless your friends are a bunch of jerks, then why are you friends with them in the first place?

Maybe people take less issue than me on this. But I really hate it when a significant other or friend habitually borrows money from me. Why don’t they just learn to save for when things get lean?

Financial management is a skill set that all adults should know; bad boy or not.

The fact that he does not know how to balance the cash flow in his life signals he is irresponsible, spendthrift, and lacks self-control.

Can you then trust him to raise your children?

7. He is secretive about his phone

These days it seems that everything starts with a ding on the phone; be it a secret liaison or a life-changing deal. If he is extremely shady in the way he angles his phone away from you, take issue!

8. He has anger management issues

Having a temper is no sin—it’s how they deal with the anger. Healthy ways are talking it out, going for a run, or getting a pint at the bar.

Unhealthy ways are punching the wall or kicking the dog. Because dearie, we are just worried that the next time he’s hitting something, it’s you.

Get him in anger management therapy or get him out of your life.

People hold anger for many reasons (not always their fault), sometimes it’s best left to professionals to handle it.

9. He has a huge ego and has to be right

It’s normal to have an ego, but what matters is he knows when to put it down and say “sorry” when he has to.

Shanice, 26, recounts her ex-boyfriend’s egotism and the various ways he would bully her whenever they faced a conflict instead of solving it maturely. A common tactic was to ignore her to manipulate her feelings so she’d end up apologising instead.

She dumped him shortly after.

If his tales and details don’t end up, it’s best to wonder if this relationship has long-term potential.

A friend of mine mentioned her ex often lied about small things, which grew into a web of lies. Eventually, he dumped her for his ex as he had been flirting with her all along.

His neediness might have drawn you to him, but insecurity is not a sexy look for a man.

Signs of this include getting irritable when you are around other guys, asking you to delete your guy friend’s handphone numbers, or questioning why you are following certain hot influencers on Instagram.

Like it or not, you will continue to find yourself in the company of attractive men. And your boyfriend just needs to work on his self-esteem (something you can’t do for him).

These 11 signs are just a guideline and not the ten commandments of break ups. It’s important to discuss issues maturely and get a second opinion from a trusted friend or family member if you’re uncertain. 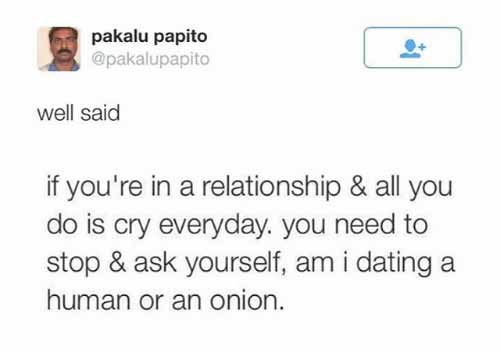