Sending strangers photos of my crotch

*I am using the word ‘vagina’ instead of ‘vulva’ for the sake of brevity.

I’ve gotten an innumerable amount of unsolicited male genitalia pictures in my (far too many) years of online dating.

OkCupid, Tinder, and Bumble all seem like vastly different dating sites, but sending women a picture of their penis is a common mating dance on these apps for some men, and I desperately wanted to know why.

I wanted to see what it felt like to send someone an unbidden photo of your crotch. I wanted to find out what would happen if I, a straight woman in her early 20s, adopted the behaviour of an f-boy online for a couple of days.

Bumble was the dating app I chose because it lets you send pictures within the app, unlike others in the market.

Before I embarked on my experiment, I laid down some ground rules.

Rule number 1: I was to use a pseudonym. I went by the moniker ‘Monica Cheng’ which is a big throwback to Things I Found Funny in Primary School.

Monica is 25, likes “chocolate and tea and BOOKS”, and life’s motto is “I know what I want and I work for it”.

Rule number 2: I was to swipe right on every single guy from ages 21 to 30 I came across, even if they weren’t someone I would personally date.

Obviously, I wasn’t using a real picture of my vag since Singapore has a law that prohibits the distribution of pornographic material, and let’s just say getting arrested isn’t on my 2018 bucket list.

I spent an hour rooting through galleries of yonic imagery and decided to use a close-up shot of a realistic sex doll’s vag.

Within the first ten minutes, I was getting matched with just about every dude that popped up on my screen. My excitement was barely contained—I couldn’t wait to find out what it’s like to flirt like a man!

With half of the guys, I initiated some cursory pleasantries (hi, hey, hello, etc.), and with the others, I sent them The Vag in the first message. You’d think that any normal person would recoil at being randomly sent a picture of a stranger’s genitals, but noOoOo.

I wasn’t sure what kind of responses I was expecting, but I was sure as hell I was going to get told off. Contrary to what I had believed, most of the men I talked to appeared to be appreciative of the picture. 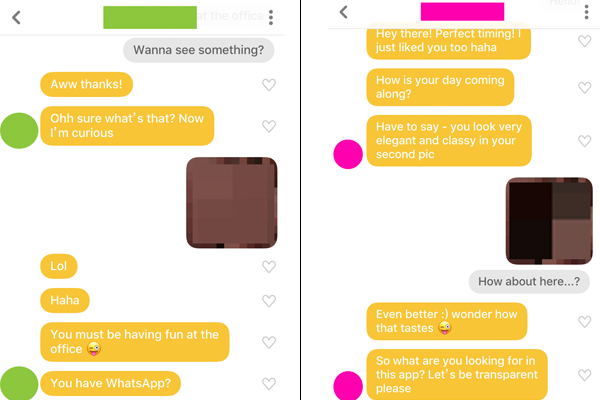 And surprisingly, only 15% (3 out of 20 guys) responded negatively, and it wasn’t even them being icked out—two of them accused me of being a spambot and the last guy said he prefers “to know a person a bit first”. None of these men unmatched me, which starkly contrasts how most women I know would react. In my case, my first instinct would be to unmatch, while some of my friends would report and block these profiles.

As I sent vag pic after vag pic, my amusement soon devolved into uneasiness as I grew aware of the fact I was not enjoying this. I started to feel disgusted with my behaviour, even though most of the guys I was talking to responded favourably.

While more positive responses came flooding in, I became increasingly nauseated; I felt like I was violating these people and overstepping boundaries. After several brief and sporadic periods of back-and-forth messaging on Bumble, I grew weary of my experiment. It didn’t take much time for me to get bored—I was hardly replying to any messages. I wanted it all to be over.

My Bumble account got banned after 1.5 days of the start of the experiment, which was a welcome relief, to be honest. Sending crotch-shots (despite them not being my own) was emotionally and mentally exhausting.

I was not comfortable sexually propositioning someone right off the bat like that. And I didn’t feel good involving somebody in a sexual situation without their explicit consent.

While I do understand it’s often a numbers game for men, I’m not so sure that we need, or even should, do this.

I wanted to make men have a taste of their own medicine, so to speak, but I ended up making myself feel bad. I started this experiment thinking that I would come out of it empowered and free, but instead, I felt overwrought with guilt and repulsed by their crude enthusiasm.

Maybe boys are taught to be forward (read: aggressive) from a young age, and that women are meant to be pursued until they say yes.

Perhaps, the fact that men are less pursued than women explains the disparity between male and female reactions to receiving unsolicited genitalia photos.

I suppose men like getting these pictures because they do see it as a sexual invitation. Maybe it’s the ‘novelty’ factor—they don’t get bombarded with propositions nearly as much as the average woman does—especially online. When a woman assumes the role of the sexual initiator, it is an invigorating feeling for men.

I will gladly send a Bumble match the first message, don’t get me wrong. But something about sending strangers a close-up shot of a groin rubs me the wrong way.

I don’t think I will be adopting this practice for my future encounters with online dating, not because it doesn’t work (Lord knows it does) but because I don’t need online dating to become another reason why I need to go to therapy.