For the longest time, I refused to go to the Singapore Zoo.

But one afternoon, I was tasked to interview elephant keeper Nursyafiqah Mohamed Yusof. So, ya girl headed to the zoo to do what she’s gotta do. 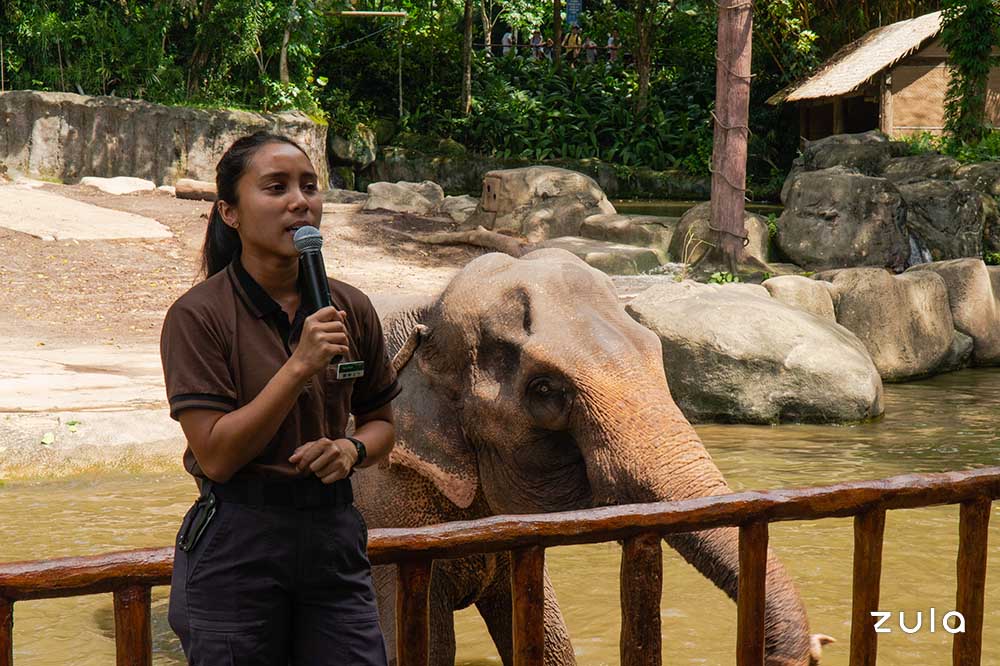 Twenty-three-year-old Syafiqah is the zoo’s first and only female elephant keeper. She also fronts the twice-daily elephant presentations and shares information about the five Asian elephants her team cares for.

Initially, the Ngee Ann Polytechnic Landscape Design & Horticulture graduate wanted to be a teacher. But that changed when her then-boyfriend (now-husband) took up a stint at the Jurong Bird Park. His answers to “How was your day, babe?” were so interesting that Syafiqah decided she wanted to pursue her love of animals too.

“If you have the passion and drive, just go for it. There’s no harm in trying. I actually tried six times. I just kept emailing every few days for a month with the same resume,” she laughs.

It was a happy coincidence that Syafiqah was assigned to the elephants, as elephants are her favourite animal. 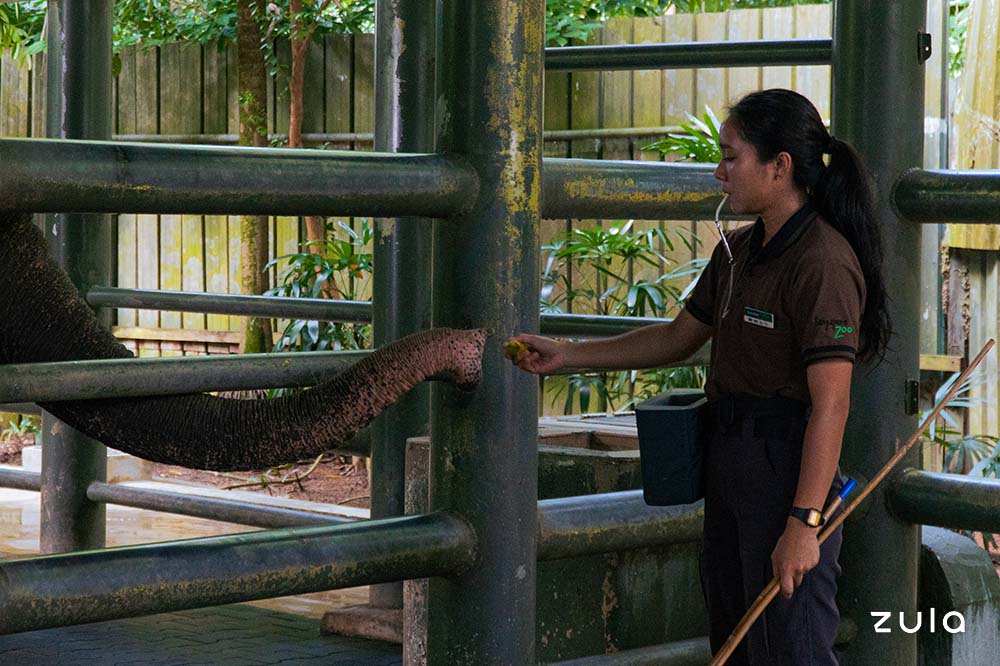 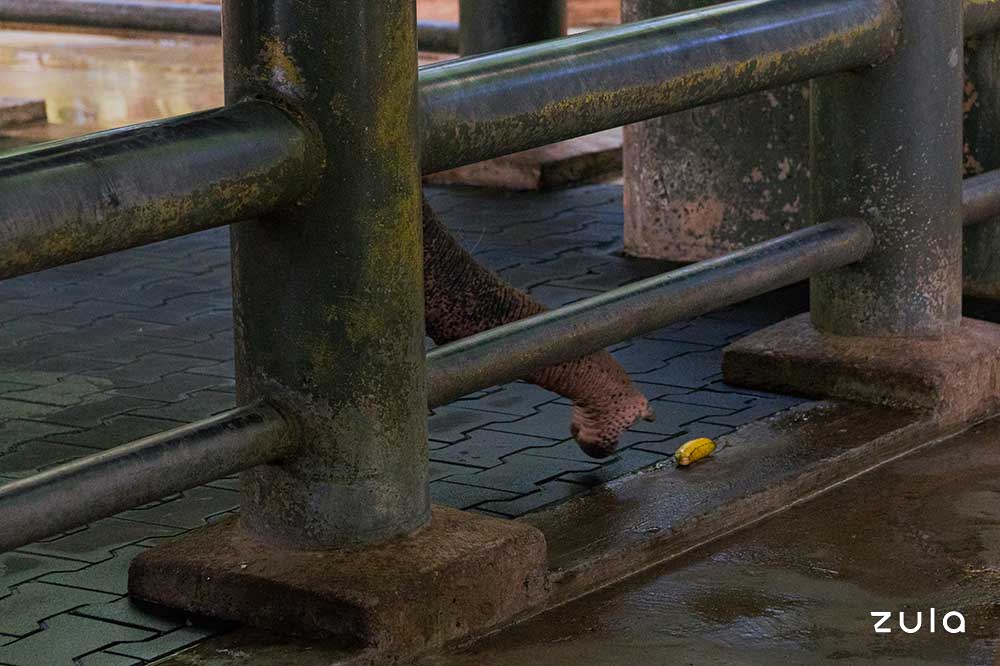 Oh no, the banana has fallen

In 2015, the Singapore Zoo began moving towards reducing visitor and keeper contact with elephants. That meant no more elephant rides or having the gentle giants learn how to paint so as to improve the animals’ welfare.

The protected contact management system was also introduced to ensure there will “always be a physical safety barrier between the keepers and the elephants.”

The move paralleled the growing awareness of elephant cruelty within the Southeast Asian elephant tourism trade. 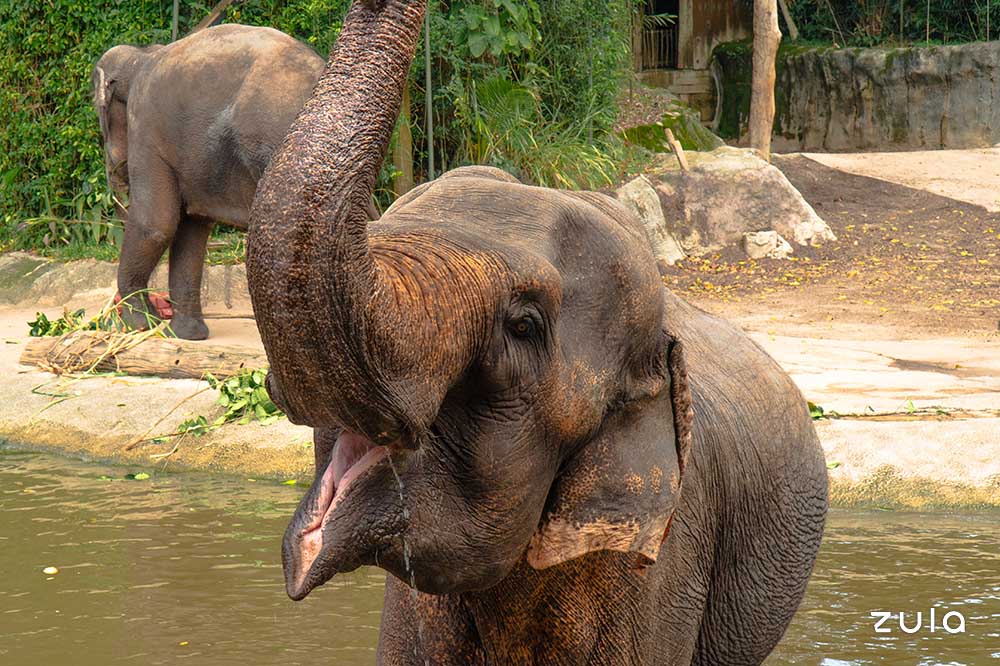 An elephant about to spray itself with water during the presentation

In recent years, the darker side of elephant tourism has been increasingly reported on by local and international media outlets. To perform tricks like paint and allow tourists to ride them for hours at a time, elephants’ spirits are first ‘broken’ with knives and hooks.

One-year-old calves are separated from their mothers and controlled by mahouts who use bullhooks to inflict pain and fear.

Often, elephants in captivity are overworked, uncared for and kept in “severely cruel conditions”. The only relief from their pain is if they die young or are rescued by elephant sanctuaries in their old age. 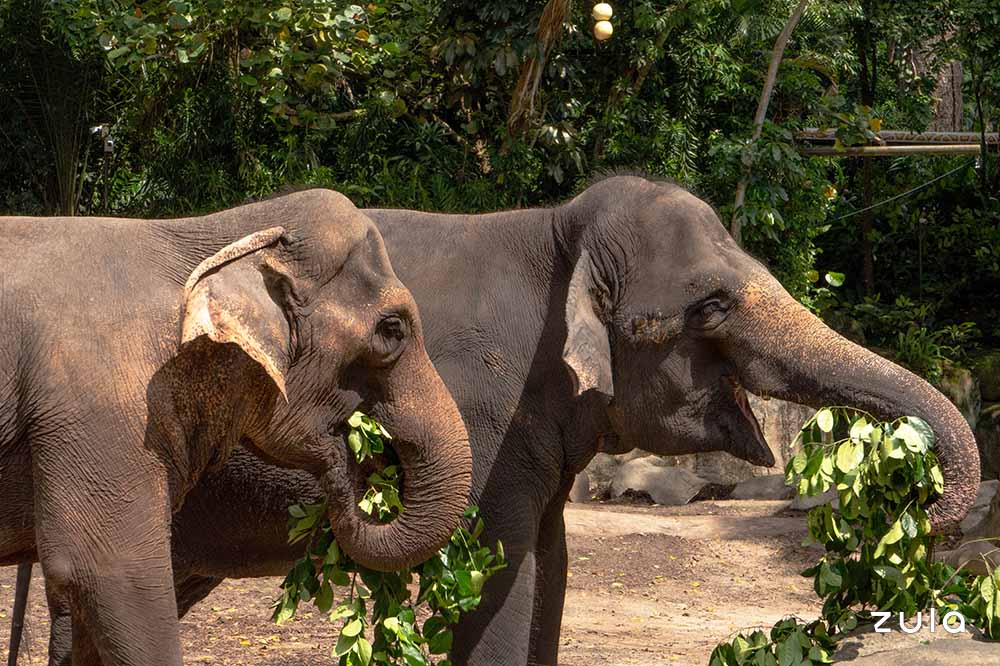 Two elephants eating together during the presentation

Elephant presentations at the Singapore Zoo

Rather than ‘training’ their animals to perform tricks, the Singapore Zoo encourages its elephants to exhibit natural behaviours.

Target sticks and treats such as jackfruit, sugar cane and durians are given to the elephants to guide them into desired positions.

This allows keepers to conduct their daily health checks, feeding and husbandry duties like nail trimming with minimal stress to the animal. The barrier also protects keepers and minimises the risk of them getting hurt. 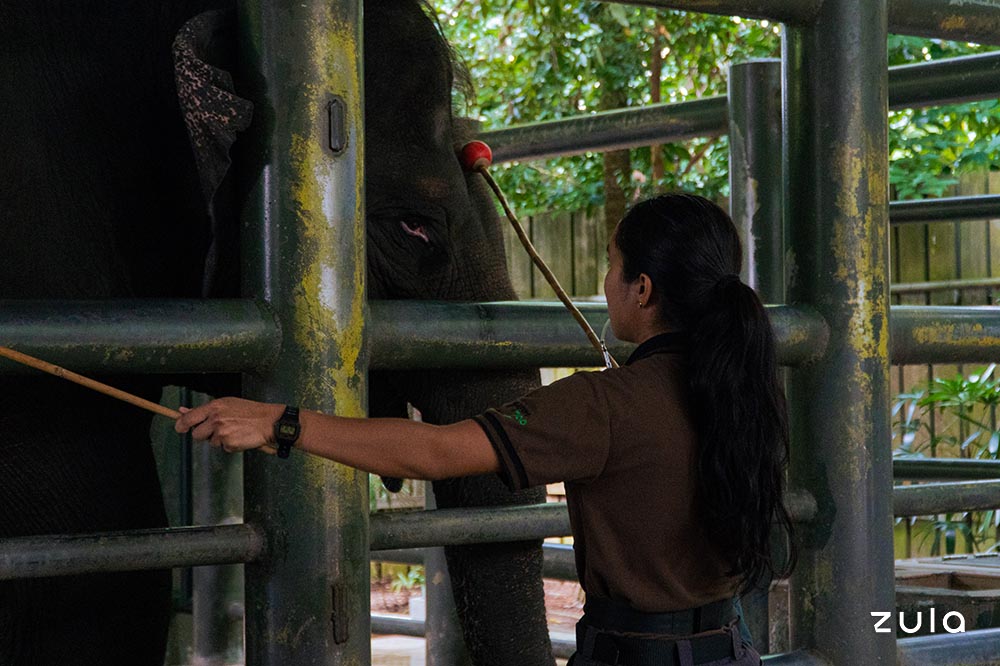 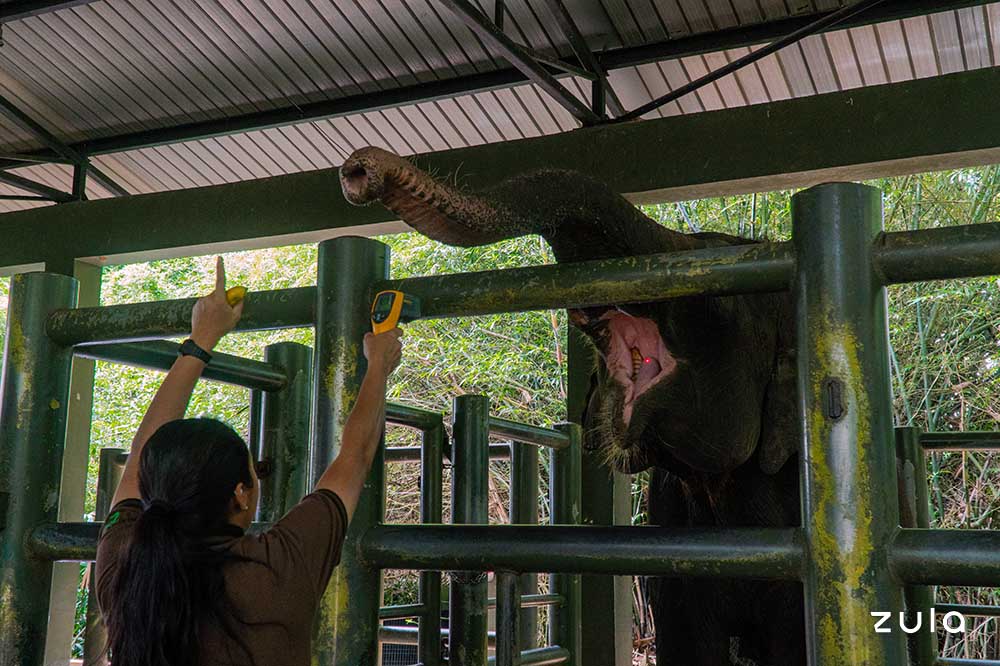 During presentations, keepers explain the elephants’ actions and personalities to the audience as they swim, eat and interact with other herd members. Audience members can also feed the elephants carrots and bananas for a $5 fee.

“Through our presentations, I hope that our audience can see [that] elephants don’t need to perform unnatural tricks for entertainment,” says Syafiqah.

On elephant rides, she tells us: “Elephants are not meant to carry heavy weights on their backs. For them to do it all day and for long hours at a stretch, it’s not good for their backs at all.”

“Elephants are highly intelligent, social creatures. They’re protective of their herd and very close to one another. As social animals, they take a long time to create a special bond with their keeper, so I’m looking forward to creating that.”

Animals share our planet; they are not for man’s entertainment. They have feelings, socialise with each other and do feel pain.

What I’ve learnt from speaking to Syafiqah is that not all zoos are prisons. Especially not ethical zoos and wildlife parks that have a strong conservation and animal welfare slant.

Some efforts the Singapore Zoo has made include funding the Elephant Response Units (ERUs) in Way Kambas National Park in Sumatra, Indonesia. The project prevents elephant-human conflicts by herding the reserve’s wild elephants away from farmers’ fields. Additionally, the zoo sends vets to provide medical care for and transfer knowledge on animal husbandry about elephants.

A percentage of the token feeding funds also goes towards the conservation of Sumatran elephants. 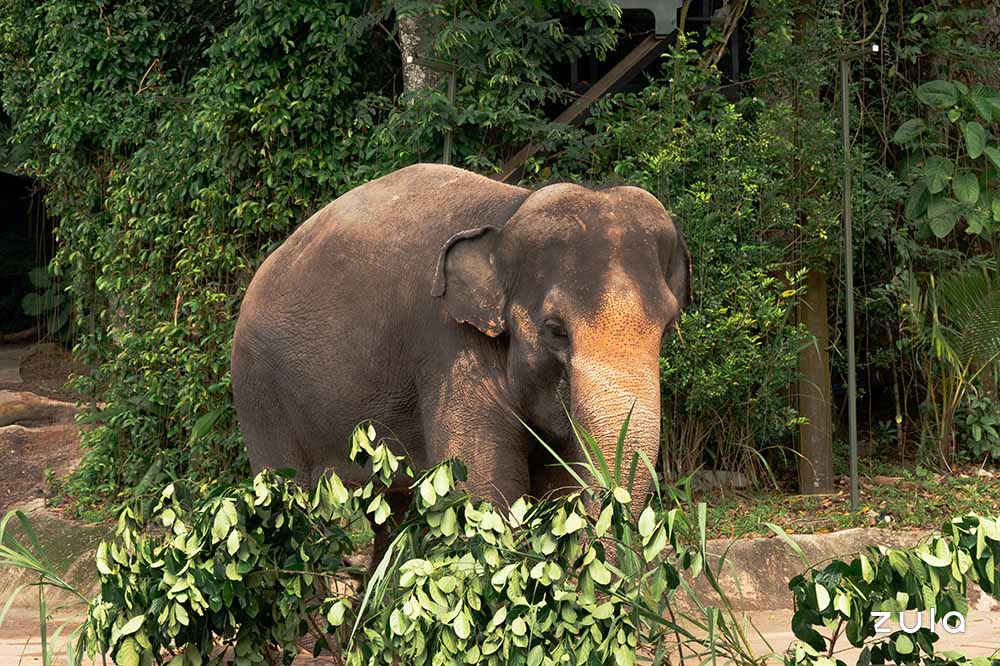 An elephant walking towards food during the elephant presentation

My day at the zoo has shown me that even if these elephants are never released into the wild, they can lead healthy, fulfilling lives in captivity when surrounded by devoted caretakers, like Syafiqah.

“When I work with elephants, I like all of what I do. Time passes very quickly and there’s really nothing else I would rather do.”

Zookeeper In Singapore: How This Cambridge University Graduate Fulfilled Her Dream Of Working With Animals