While some define #YOLO as #eatsleepraverepeat, this garang 24-year-old female had something else in mind—going on a solo backpacking trip. And so she did, to 37 cities in 7 countries within South America for 8.5 months.

Melissa was my secondary school senior in choir before I joined her in Ngee Ann Polytechnic, where we were schoolmates for another 2 years. At first glance, she may look like a nerd who aces biology exams, but don’t let her appearance fool you. From hitchhiking with strangers on pickup trucks, to illegally crossing the borders of Bolivia, she has conquered them all.

Melissa:
While most 11-year-olds would blindly follow their parents’ travel plans, I grabbed every opportunity to “sell” my destination to my #kiasuparents. I made overseas school trips sound extremely educational.

I realised over time that there’s this thing where “if mum/dad is ok with it, then I am too.” So I’d find the more encouraging parent and approach him/her first. 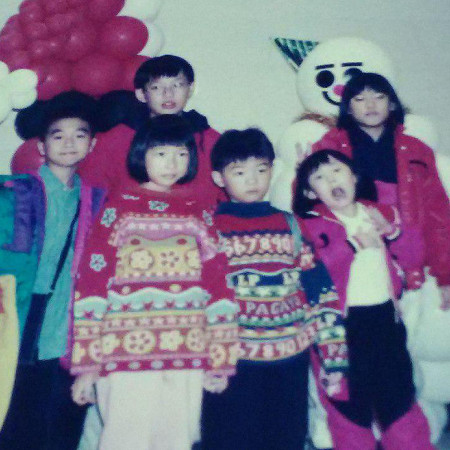 No prizes for guessing which kid I was.

At 21 years old, my resolution was to head to Japan because I was enamoured by their culture and food. The possibility of learning the language at a faster pace through cultural immersion was also a huge plus.

However, due to miscommunication, my trip to Japan didn’t materialise. I tried contacting the hostel owners 2 weeks before my trip but to no avail. So I picked up my map, glanced at the list of countries and looked at the first alphabet. Argentina it was.

Getting Lost in One of South America’s Longest Avenues

I like placing myself in uncomfortable situations and it shows in my choices in life. E.g. When I first arrived in Bueno Aires, I was given 3 ways to get to my hostel:

I didn’t know a smidge of Spanish; the language spoken by most South Americans. But it didn’t stop me from happily choosing the cheapest mode of transportation. Needless to say, I got horribly lost on one of the longest avenues in South America, Avenida Rivadavia, that stretches 37km-long. Making my way to the hostel was certainly an adventure. Thankfully, I survived due to my A+ skills in charades and meeting some students whom I conversed in broken English with along the way.

For the bulk of my trip, I stayed in hostels and paid for my own accommodation. I also received complimentary hostel accommodation in exchange for menial tasks like making beds and preparing breakfast.

But my favourite form of accommodation is couchsurfing because it’s the most intimate way of getting to know the locals and their culture.

I couchsurfed in the very first city I visited in Argentina, Buenos Aires. I got lost and ended up reaching the host’s house at 12.00am and apologised for my late arrival. However, I found out that South Americans have dinner at midnight and managed to score free food with them as they were cooking dinner.

While sourcing for places to couchsurf in Buenos Aires, I came across a man who was organising an Asado (barbeque), for his guests. While his place couldn’t accommodate me, I wrote in and ended up joining his Asado as well.

Besides indulging in local delicacies like blood sausage, grilled intestines and heaps of meat, we also drank fernet con coca (herbal liqueur mixed with Coke), an Argentinian favourite. We ended the evening by exploring local street art and a graveyard.

The ironic thing about solo travel is that you’re never alone if you don’t want to be.

I’ve befriended people in parks, bookstores, restaurants and even while helping them take photographs. I even travelled with 4 other solo backpackers I met on the bus from Salta to Atacama Desert.

One of my most memorable memories was when we rented bikes to explore the vineyards of La Serena together. While I knew how to cycle, it was cycling around our local East Coast Park that I was used to. Not steep hilly terrains?! The Australian girl was a competitive mountain biker, so she chiong-ed ahead with the rest while the English girl and I lagged behind.

Halfway through, we decided to hitchhike and scored a pickup truck. We placed the bikes at the back of the truck and waved enthusiastically at our friends as we breezed past them. Thankfully, the drivers weren’t dodgy and we arrived safely at our destination. 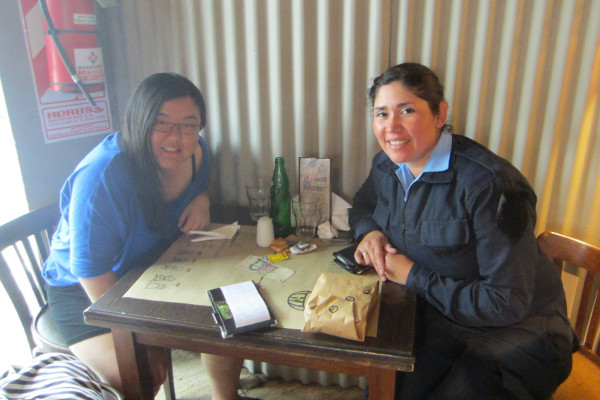 Once, my Kindle was snatched from my hand while I was looking for my map. I ended up befriending the officer who processed my claim and shared lunch with her.

Travelling to Salar de Uyuni, the world’s largest salt flat, with a bunch of backpackers I got to know on a mini van ride from Tupiza to Uyuni.

Music Is A Universal Language

Like the Chingay Parade of the southern hemisphere, Carnival’s one of Brazil’s largest annual events. I was in Rio de Janeiro to celebrate the occasion, and it was exactly like how I imagined it to be. The streets were decorated with vibrant colours, pumping music filled the air and jovial attendees—locals and tourists alike—revelled in the festivity.

While Carnival also involved plenty of alcohol which wasn’t my scene, the rhythms and beats of Latin American music genres like samba, bossa nova and frevo definitely were. Back in Polytechnic, I was part of a percussion club where I grew to love the tamborim. I brought my instrument with me and whipped it out to play along with the Carnival beats. We didn’t have to speak the same language to appreciate good music.

During my trip to South America, I decided to study Spanish. Unlike Argentina and Chile, Bolivian Spanish is spoken at a slower pace and has a more neutral accent that’s easier to understand. 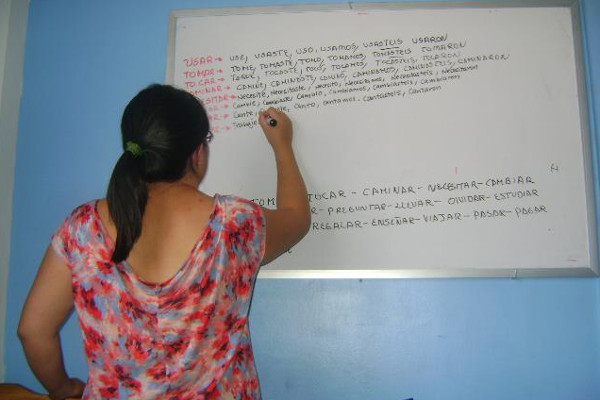 A sneaky picture my friend took of me practicing Spanish in Sucre, Bolivia.

Travelling made me gain a newfound appreciation for life back home and I missed how efficient Singapore is. As I was trying to enter Santa Cruz in Bolivia through Campo Grande, Brazil, the immigration authorities refused to grant me entry as I couldn’t provide a travel itinerary (not surprising for a backpacker).

So I went to and fro a computer shop about 10 times to create a false itinerary in the hopes of crossing the border. But there was always a detail lacking from whatever I submitted.

After several attempts, I was like, “f*** it.” It was clear that they weren’t interested in helping me so I entered Bolivia illegally** and took the bus to Santa Cruz’s immigration centre. Although I wouldn’t encourage anyone to be as reckless as me, it all worked out in the end. I was, however, fined USD$100 for my illegal entry to the country.

**: The border between Brazil and Bolivia is different from the ones we know between Singapore and Malaysia. When you’re at the customs, you’re technically already in Bolivia. You don’t even have to pass the immigration to enter the country.

The Reality of Travelling

8 months into the trip, I developed travelling fatigue after constantly moving into new environments, staying alert and depending solely on myself.

On short trips, I’d typically pack my itinerary to the brim with 5 back-to-back activities from 6.00am to 9.00pm. But towards the end of the trip, I only had the energy for 3 activities before rolling into a bazhang in bed. 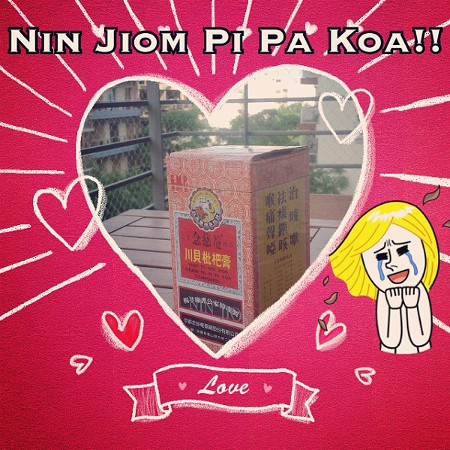 IG @melrockswoo: “See what I found in Buenos Aires’ Chinatown to
soothe my dying throat!”

In Singapore, my go-to medicine for sore throat was Pei Pa Koa but due to a lack of space in my luggage, I wasn’t able to pack a bottle with me. Discovering this bottle in Buenos Aires, where I fell sick, hit me right in the feels.

I haven’t encountered any life-threatening incidents myself but a backpacker I knew did. While waiting for her tour to begin, she saw three dodgy-looking men approach her. Feeling something was amiss, she quickly walked away.

When a taxi driver “kindly offered” her a ride to safety like a knight in shining armour, she jumped in without a doubt. In the end, the driver turned out to be the real wolf. He drove her up to the mountains and tried to rape her. Luckily, she managed to fight back and narrowly escaped from his clutches.

Although I don’t encourage first-timers to embark so far away from home, nor for such a long period of time, travelling made me venture outside my comfort zone. I learnt to be more independent and to not let others easily dictate my decisions. I didn’t let the fear of the unknown stop me and I felt more connected to others by getting lost. Everyone is prone to trust issues, but I gave others a chance to prove me wrong.

At the end of the day, don’t let “but you’re a girl” limit your choices in life. Have fun, be careful and always remember: