Whether you’re on Tinder to “network only” or to look for English tutors, there’s no denying that swiping is addictive. Just like Pokemon, you will never know who/what you would catch.

Whether you’re into ripped Machokes or cute Squirtles, here’s our compiled Pokedex to help you unravel the different characters you might stumble upon during your Tinder journey.

Think Aloysius from Ah Boys to Men. He probably gave in to peer or parental pressure to find a girlfriend. At times, he’ll remind you of your Math teacher back in secondary school–a little socially inept, but a total sweetheart.

Mr “Hey Do You Remember Me in Primary School”

With Singapore being so tiny, it’s inevitable to bump into people we know. Who knows? It may end up like a Nicholas Sparks love story. Unless he’s a creep that remembers the number of bobby pins on your head and PSLE score. Bro, girls don’t want your sports apparel on Carousell lah. More than just selling yourself, Tinder can also be used to sell your products or look for a job.

The kiasu Singaporean dream is to achieve the 5Cs – condominiums, cars, country clubs, cash and credit cards. From ritzy cars to atas tailored suits, he’s got it all. But tbh, if I wanted to see a picture of a Lamborghini, I’d Google it. 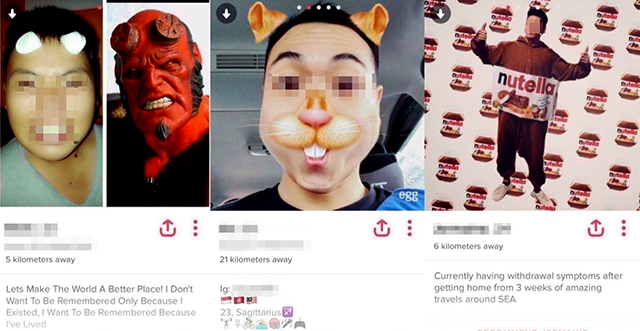 Maybe it’s the snapchat dog filter, or bios like “I’m here looking for my Tinderella.” But when 359/500 characters are emojis, we get it – he’s Mr. Kawaii.

He studies in US/UK/Australia but will return to Singapore during the holidays and charm you with his fake accent. He’ll also amuse you with stories from his time abroad like when he met Ed Sheeran on the streets of London *such amaze* *much wow*.

He uses reverse psychology with “why don’t you talk to me first” or “swipe me if you dare”. Alright, I’ll swipe. But left or right? It’s for me to know and you to find out. 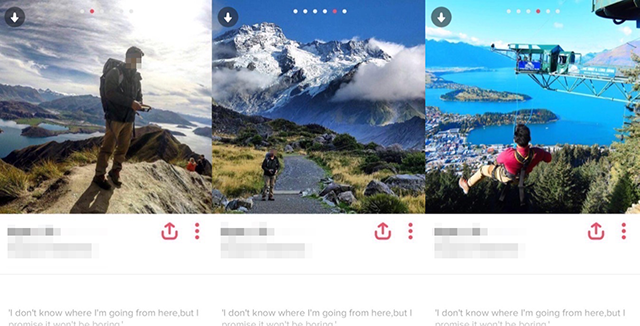 One minute he’s hiking the Great Wall of China, the next, he’s skydiving in Dubai. Chatting with him will satisfy your travel cravings as you live vicariously through his backpacking stories. You’ll also get to see 258 angles of how the sky looks like through the plane window.

Filial piety is valued in Asian societies and photos with his kin scream “I’M HUSBAND MATERIAL!”

He’s so handsome we’ll suspect he stole his pictures off Google. Though K-dramas tell us that Prince Charming’s out there for us, Crimewatch says otherwise. So when we chance upon someone who seems too perfect, we can’t help but suspect he’s a scammer.

He says he’s only looking for buddies to watch concerts and cafe hop with. Perhaps “buddies” is a new term for “friends with benefits.” But buddy, if you mean what you say, congratulations, you friendzoned yourself.

His bio is filled with cheesy pickup lines. “Know what will look good on you? Me!” or “What’s on the menu? Me-n-U!” If you love light-hearted conversations with dry jokes, swipe right. 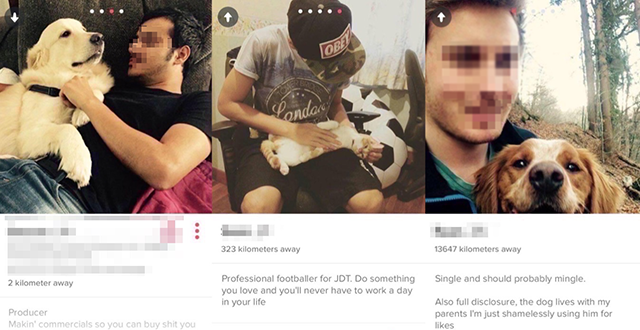 Though it’s a cheap tactic to use pets and tiny humans to score that right swipe, it’s no secret that this trick works like a charm.

He has no idea why he’s on Tinder. Accompanied by a “IDKKK what to say here” caption, most of his photos are blurry and cropped out of frame. He also says he’s on the app because it’s a great way to pass time while he poops. ¯\_(ツ)_/¯

President of the #antisocialsocialclub, he’s all about that #hypebeast life. When he’s not on the guestlist for free club entries, he’ll hang out at the raddest music fests to #eatsleepraverepeat.

Everyone loves a hot bod. But most girls we know have a limit for half-naked mirror selfies of alpha males. We girls are vain, but it’s a little odd if our guy checks himself out more than we do. He takes pride in grooming his stubble and man bun, and filling his feed with avant-garde cafe shots along Duxton Hill. He’s also got a penchant for art & literature to feed the old soul in him.

If you’re into bad boys, thank Guan Yin Ma as there are plenty of these guys on Tinder. However, when every photo features 1) your tattoo 2) you at the tattoo parlour 3) you partying with your squad of fellow bad boys, we’re not sure if your character will be as colourful as your skin.

“The meaning of life is to give life meaning” or “you’re a victim of your own mind.” If you’d like to have a HTHT talk on love and life with someone, swipe right.

If you’re on social media, we’ll stalk you. And when you obviously have a girlfriend, we’d rather you keep your “innocent” networking skills on LinkedIn.

Picture 1: a photo of him teaching kids in Cambodia
Picture 2: a scenic Tumblr-esque shot captioned “live life to the fullest”
Picture 3: a picture of him at a blood donation drive

He’s the guy who’ll feed stray cats at the void deck because he’s all about creating good karma.

We’re not going to scrutinise five group pictures to figure out what you look like. Because 1) we’ll assume that you’re the ugliest/most insecure of the lot, and 2) ain’t nobody got time fo dat.

“180cm tall NUS graduate, president of the dog-walking club, chemical engineer by day and professional bartender by night. I’m also nice, emotional and loyal.“ You’ve got perfect grammar and a great personality? I’d definitely hire you – I mean, swipe right on you.

“Hello me is here for weekend! I looking for someone to show me Singapore and practice English.” I didn’t realise that Tinder provided job opportunities too. That’ll be $250 for the tour and tuition, please. 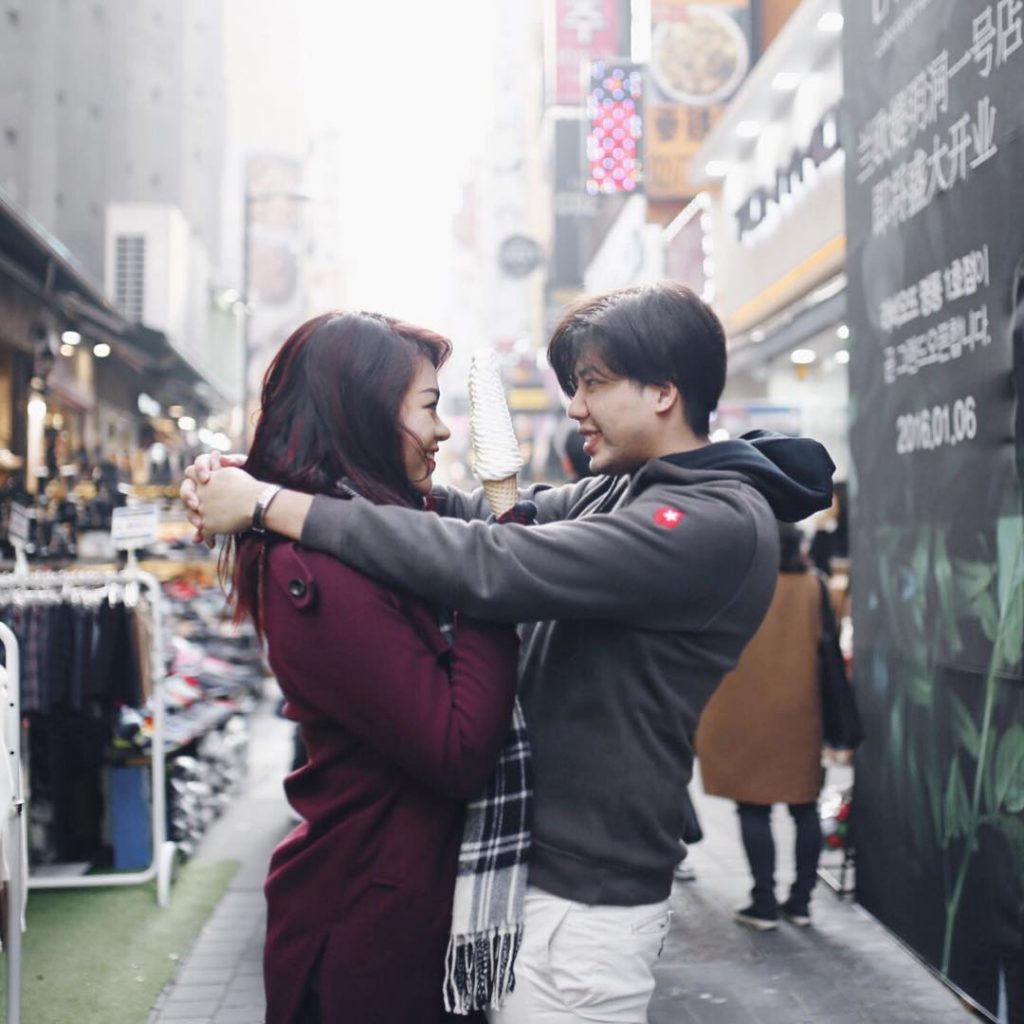 He’s the one who might seem like any of the above until we get to know him beyond his online persona. It’s human nature to fit people in boxes but if you take time to know someone, you’ll realise that there’s more to each person than their 3-liner caption and dubious profile picture.

Be wary of what you post because girls are like archaeologists; we’ll meticulously scour through your social media accounts and find out who you dated last, last summer. Specifically that girl in the Instagram photo posted on 24/11/2010, 7.48pm, when you were at your grandma’s place.

Grouping guys into categories may seem kinda harsh, but Tinder’s one of the few places you can openly judge a book by its cover – ‘cause that’s all you’re really given.

However, if the dating game gets too tiresome, just remember that love fades but pizza is forever.