It’s official ‒ we’re already in October, so our favourite spooky season is right around the corner. To get you prepping for this coming Halloween, Levi’s has partnered with Universal Monsters, the OG horror icons from films like The Frankenstein, The Bride of Frankenstein, and The Mummy for a 10-piece collection.

We’ve seen how October began with wet weather days, and you can keep yourself warm and stylish at the same time with this Frankenstein Monster Trucker Jacket. Don’t be fooled by the classic button-up front, as the back of the denim jacket showcases a screen-printed graphic of Frankenstein’s monster for a surprise spook factor. Its oversized fit will also suit those who prefer a baggy look. 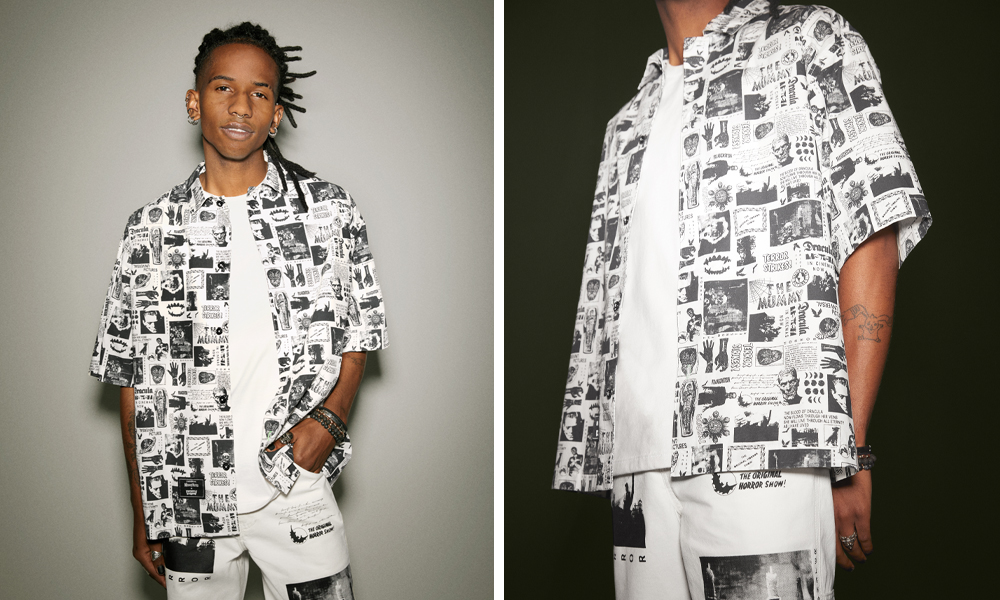 The All-Over Print Slouchy Shirt is more than just a black and white shirt filled with prints from the three iconic horror movies ‒ there are also several glow-in-the-dark graphics among the collage. Wait for them to come “alive” at night and scare an unsuspecting friend.

Being misunderstood is never a good feeling, so imagine how Frankenstein’s monster felt when he was abandoned by his own creator. He merely wanted love. 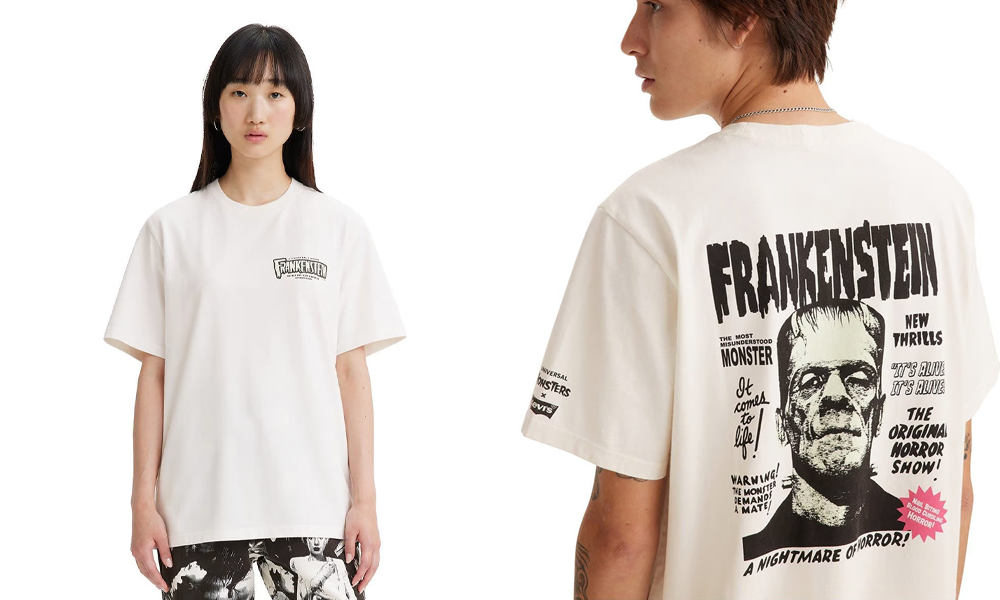 The Frankenstein T-shirt in white expresses the horror of the film through various wordings like “It’s alive!” and “A Nightmare of Horror!” on the back alongside a graphic of the monster. 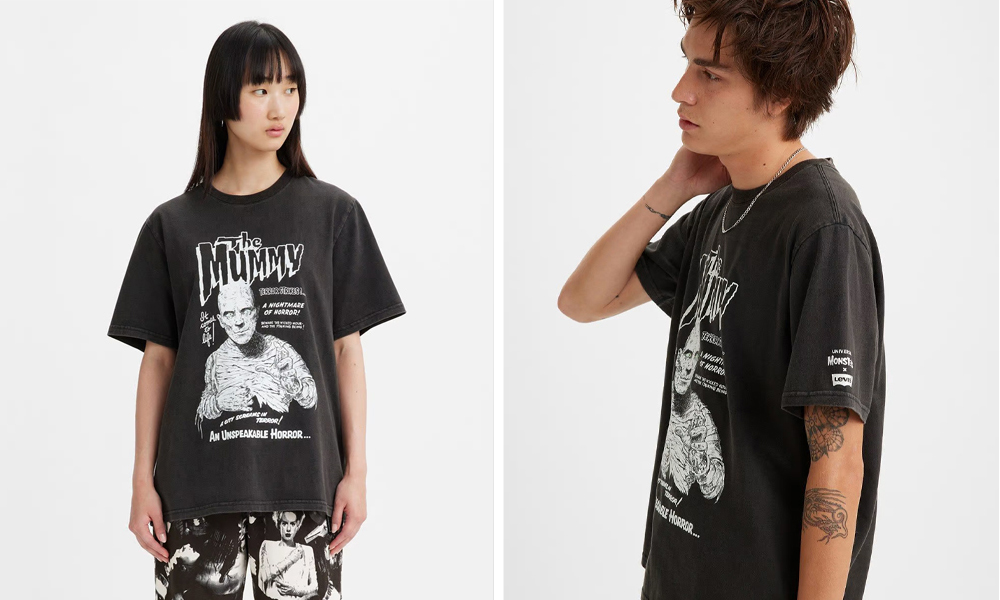 The Mummy is another classic horror film that is not for the fainthearted. Pay tribute to the scary monster with The Mummy Black T-shirt that features a glow-in-the-dark screen-printed The Mummy graphic on the front. 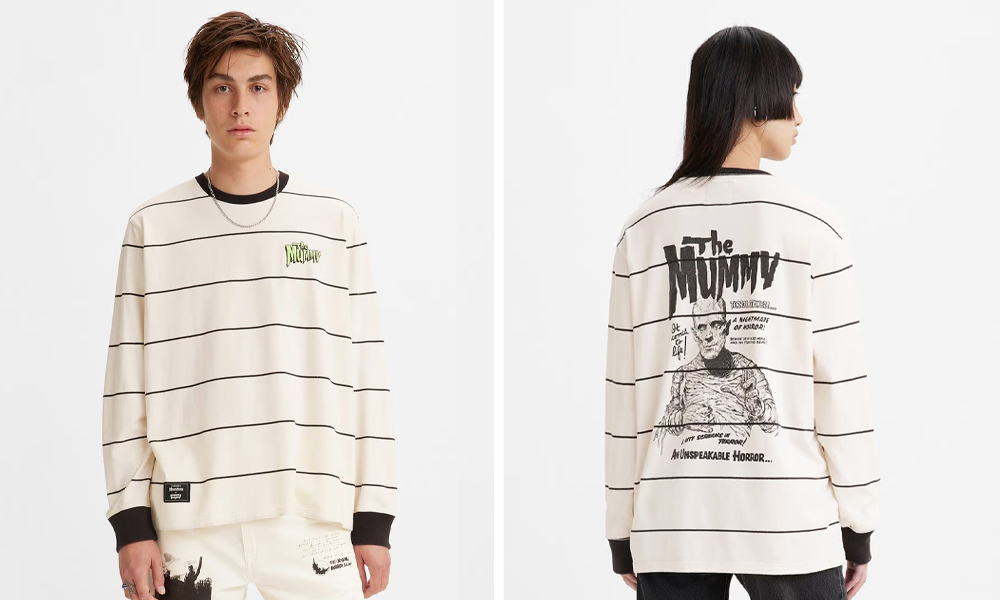 Stay warm like how The Mummy is wrapped up with this The Mummy Long-Sleeved Shirt. The white long-sleeved shirt features black accents on the collar and wrists, and also has black stripes to mimic the wrappings of the monster.

The Mummy Long-Sleeved Shirt retails at $79.90.

ICYMI, Levi’s is known for their durable denim jeans, and in this collection, the brand brings together horror and style by featuring their classic Black Rinse 90’s 501 with the Bride of Frankenstein. In contrast to the black base, the jeans stand out thanks to the white graphic of the monster that spreads over the front of both legs of the denim bottoms. If you can’t decide which monster you like the most, consider the Stay Loose Carpenter Pants instead. It features all monsters from the three classic horror movies and comes in an oversized fit for those who wish to rock a rugged, loose-fit fashion. Unlike cutesy tote bags that we commonly see, the Monsters Tote takes a 180-degree turn with a “darker” design by featuring Frankenstein’s bride. Crafted with 100% cotton, the tote bag comes with dual handles that hang comfortably on your shoulders especially when you bring it out for an errand run.

Sling bags never go out of style as it is useful and handy when it comes to carrying essentials. Go light and stylish at the same time with the Monsters Sling Bag which allows you to wear it over your shoulders or waist. Complete your Halloween OOTD when you accessorise with a bucket hat. The Monsters Bucket Hat allows you to experiment with your fashion style through two different looks thanks to its reversible feature.

The side in white lets you express your love for classic horror films whereas the side in black glows in the dark with a neon green stripe design.

Fun fact: It has almost been a century since the release of the three movies featured in the Universal Monsters x Levi’s collection. Even so, they still serve as classic masterpiece films for those who are up for a spine-tingling cinematic adventure.

Interested folks can head over to purchase the collection on Levi’s official website or Levi’s outlets at ION Orchard, Plaza Singapura, and Bugis Junction.

All images courtesy of Levi’s.