Time certainly flies whether we like it or not, and the once iconic NTU Kukubird cheer that went viral two years ago has since been forgotten by Singaporeans. When the pandemic hit us in 2019, local universities were forced to take a pause on physical university orientations.

As someone who was heavily involved in organising orientations back when I was in university, this toxic “tradition” of orientations isn’t new. Sexual cheers, non-inclusive Hokkien slangs and pouring food on freshies were just the tip of the iceberg.

Fast forward to 2022, and now freshies are eagerly looking forward to the first physical orientation since Covid. But now that most seniors have graduated, including myself, there isn’t a lot from the past that we can hand down to the leaders organising camps today. As someone who used to be a toxic group leader (GL) during my university days, here’s what my past experience was like and what I’ve learnt since then.

P.S. this article refers to the common camps that are organised by students, rather than the official ones held by the school administrations. 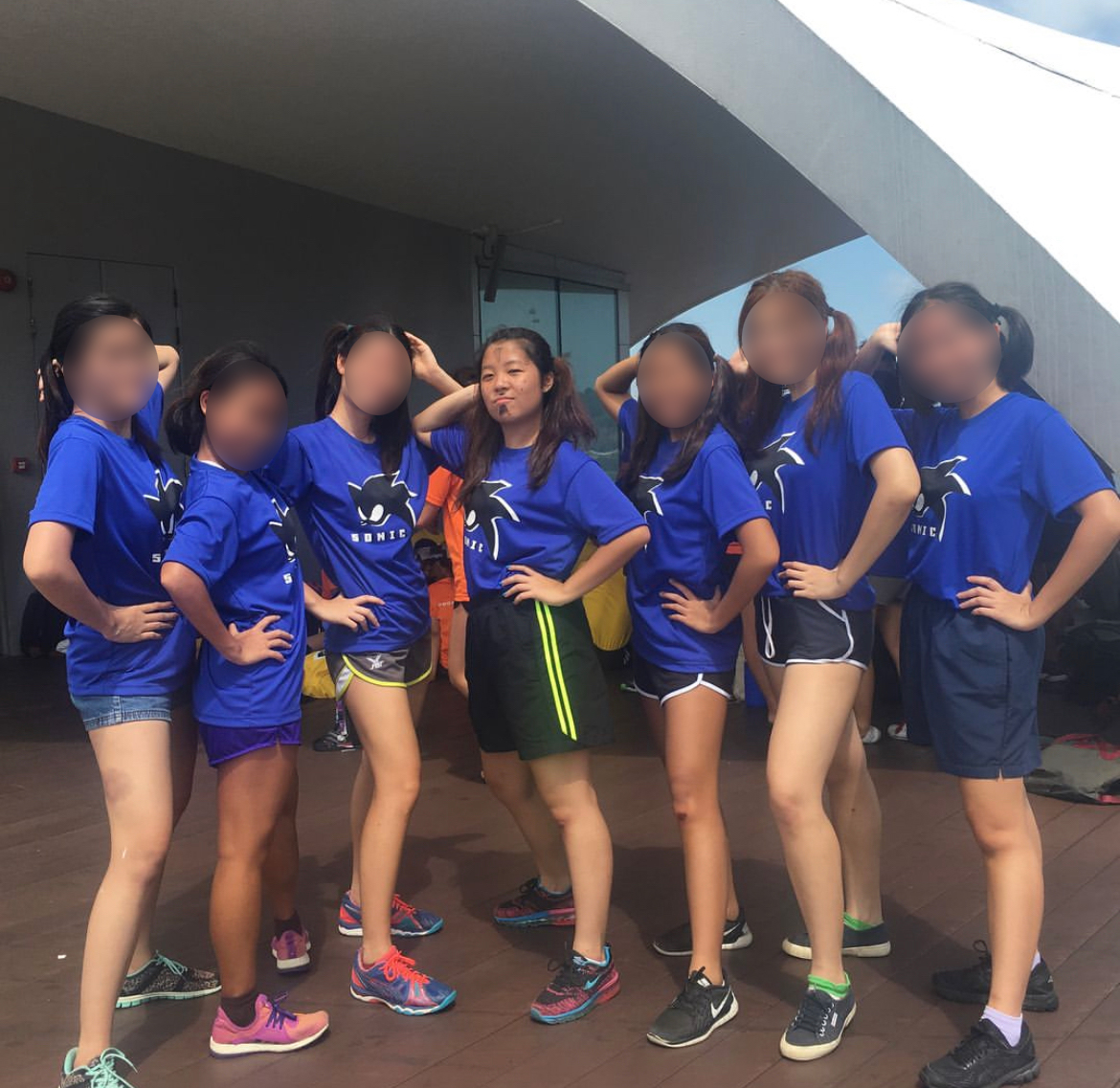 Me as a freshie during orientation

Flashback to 2017: I was a wide-eyed 19-year-old freshie, excited to start school and meet new people. I didn’t really know what to expect but that didn’t bother me at all — see, I’m an extrovert through and through.

Overall, I’ll admit that orientation was undoubtedly fun. But there were a lot of moments I felt scared and pressured to do things, as well as countless activities that made my friends and I feel like we were getting unreasonably punished.

Picture this: having scribbles drawn on your face with a dark marker, having to eat raw chilli padi and waxing our male friends’ leg hairs. All this in public — it’s embarrassing enough just recalling those moments.

One memorable game I remember back in school was having to play with smelly food — fish sauce as water bombs, cracking raw eggs on our heads and throwing flour on each other.

I hated these games, but my seniors kept reminding me that it was “normal” for every orientation. I didn’t want to seem like a killjoy, so I sucked it up and just went along with everything. 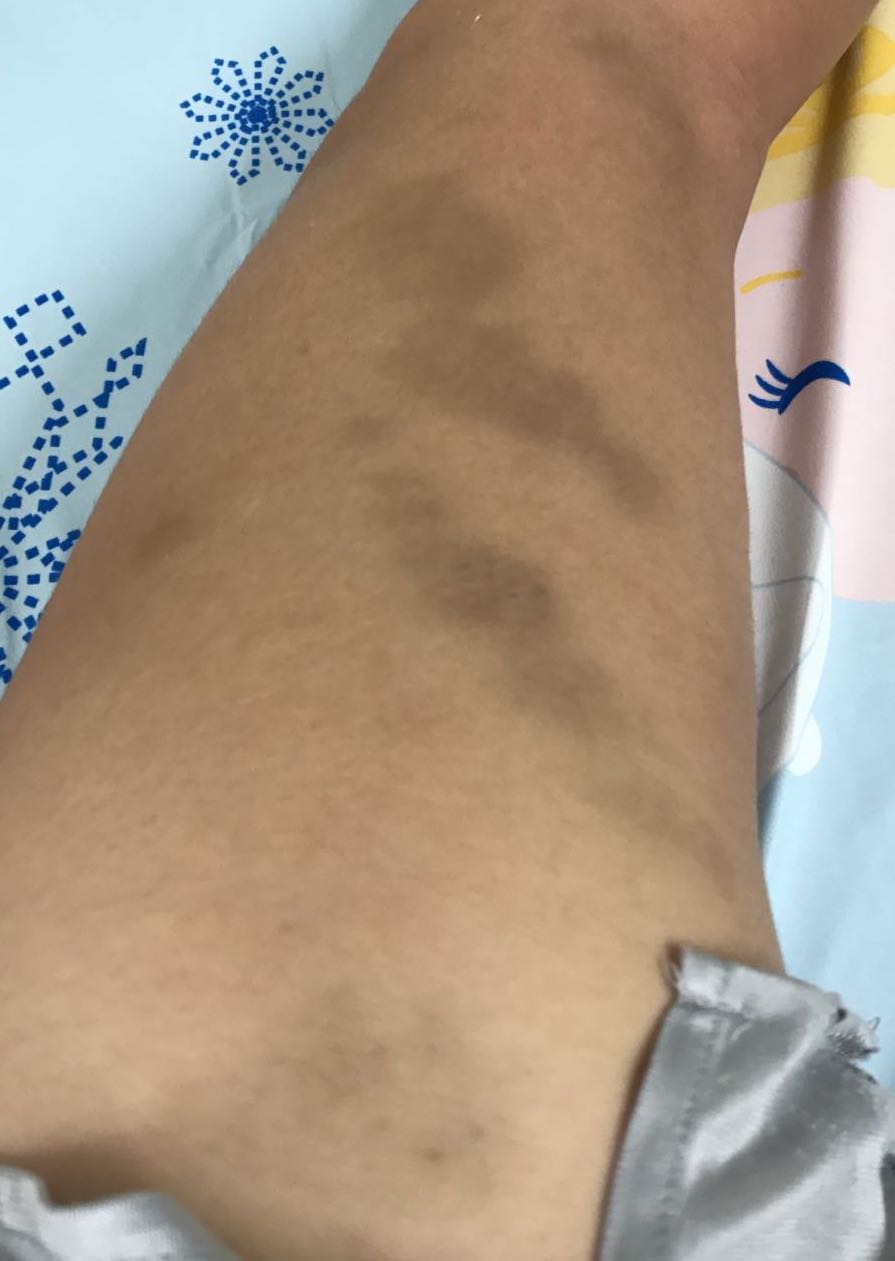 Also, despite it being the 21st century, a lot of orientation activities revolved around guys being “bullied” by girls. Especially when it came to the highly-anticipated beach day, where there’s a popular game known as “Tear, Tear, Tear, Underwear” (yes, this is sung to the tune of Darth Vader’s theme song).

TLDR, it’s a game where boys have to wear disposable underwear over their pants and stand in the sea. Meanwhile, us girls had to swim down to tear it off their body. Any inappropriate touching was somehow okay, including having boys strip their tops, carry girls on their backs and do intimate acts.

Even when I felt uncomfortable, I wanted to do my best to feel accepted into my new university environment. A lot of the games were physically tiring and mentally draining, and I didn’t realise how much of a competitive spirit I had until I discovered my leg was badly bruised by the end of five days.

Becoming a GL myself 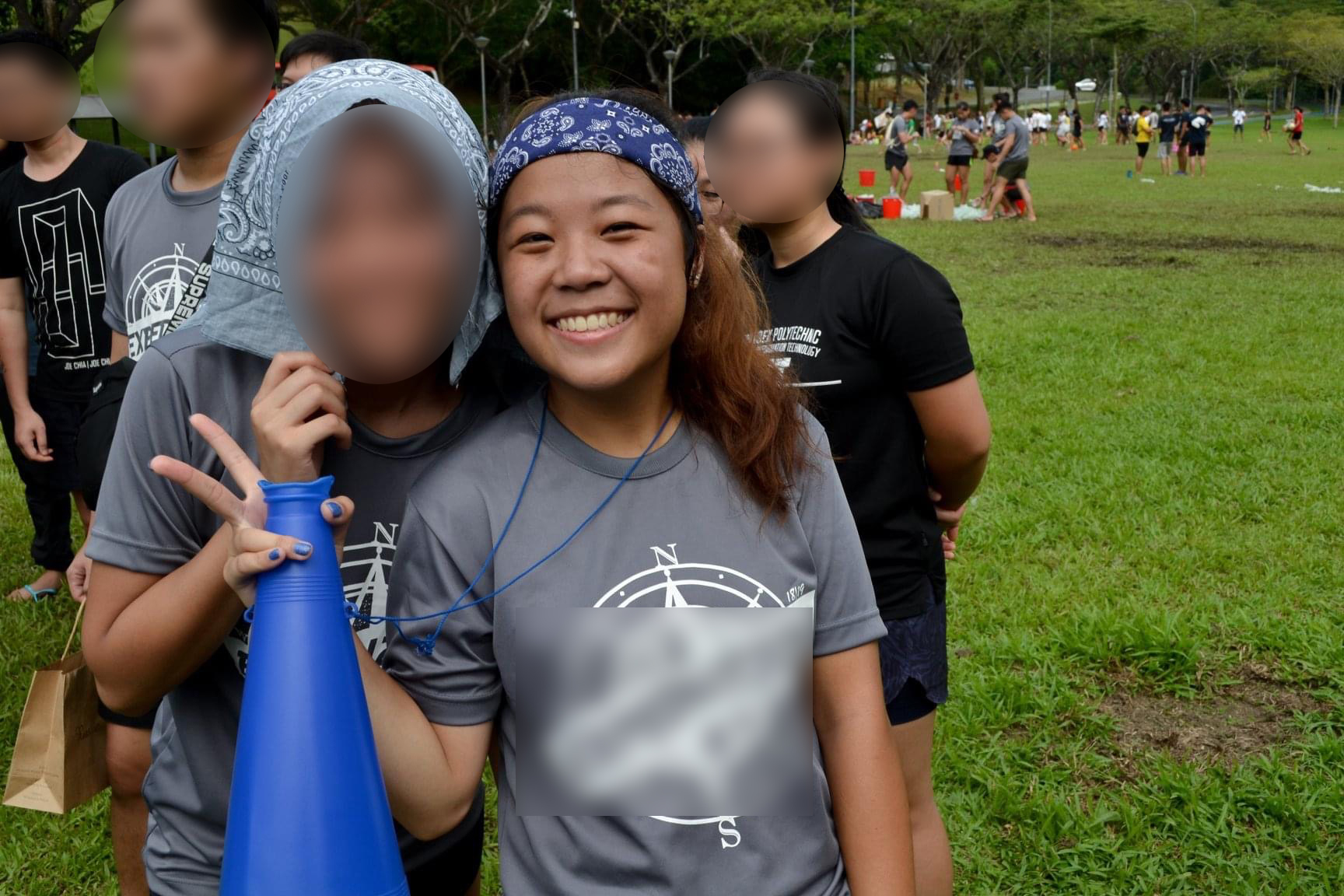 Me as a GL, constantly holding a megaphone

Here’s the thing about a toxic orientation cycle: when you’ve been “bullied” as a freshie, your next goal is to relay that feeling tenfold to the next batch. It’s somehow comforting to know that you didn’t suffer alone, especially when everyone around you is doing the same. This illusion would then make you feel like there was nothing wrong with your actions.

Unfortunately, I was swayed by this mindset too.

Introducing my stereotypical orientation GL starter pack habits: carrying a megaphone 24/7, tying my orientation group (OG) colour bandana on my head, and packing all my essentials into that YP black sling bag. Yes, I was every bit as annoying as you can expect a GL could be.

I found myself forcing my freshies to do Hokkien-based cheers that even I myself didn’t know the meaning of, making up the same excuse as my seniors — “it’s tradition, we have to say this every year”.

I also continued making sexualised jokes and cheers — along the lines of the iconic Kukubird cheer — making freshies uncomfortable for the sake of “good fun”. That included writing the words “I love mushroom” on a female’s arm in marker, followed by “I got mushroom” on a male’s arm. Real mature for a 20-year-old, I’m sure.

Taking on bigger roles and responsibilities Becoming part of my hall committee in Year 2

It didn’t stop there — being at the centre of attention and always having fun were addictive. Soon, I was obsessed with wanting more. By Year 2, I took up more roles and responsibilities that gave me authority, and became in charge of events and higher senior orientation roles.

Swamped with my new responsibilities on top of school work, I became more toxic than ever as a senior. I lost my temper when people didn’t show up for events that I organised, even guilt-tripping and excluding those who weren’t as active as I was.

Of course, these new roles also came with a set of more terrible initiation and orientation activities to plan for. Cue “Toxic” by Britney Spears. 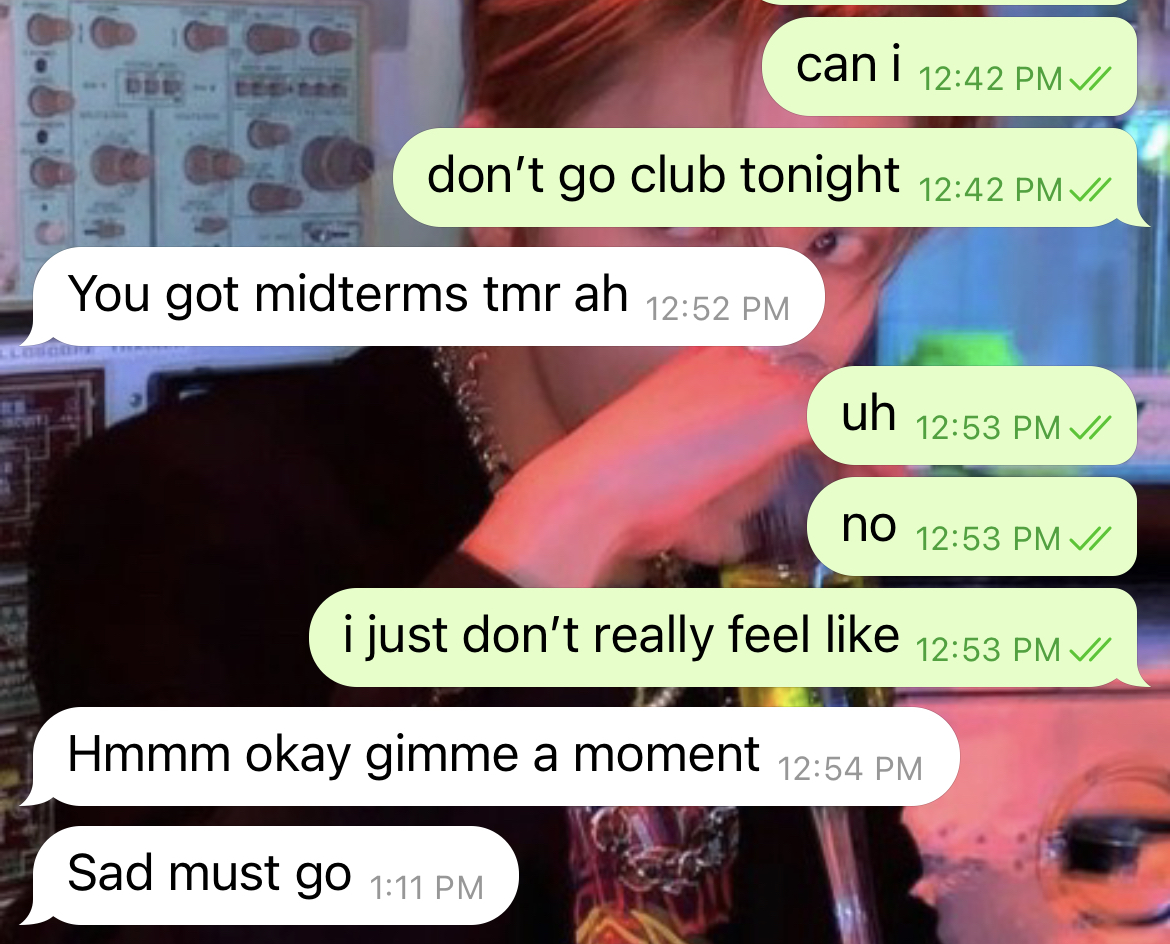 My committee president “not allowing” me to skip clubbing

It makes sense, after all, since I was constantly surrounded with people who had the same mindset as me. With how university halls are so focused on partying and alcohol, clubbing became a part of my “job scope” too. I couldn’t say no to clubbing unless I had a valid reason, even if it meant I’ll be tired AF in my morning class the next day.

While I had always dreamed of exposing myself to more experiences in university, I was subconsciously falling into a bad headspace caused by peer pressure. In turn, I forced this pressure onto the people around me too.

12 University Students On Hall Life In Singapore: Safety, Staying On And Hall Activities Alas, the Covid-19 pandemic hit in 2020, and all university orientations were shifted online. I was undoubtedly one of the seniors who became super disappointed upon hearing the news. Meeting people via Zoom and no more tortuous activities? Boo, that’s so lame.

I was in my final year when it happened, so I couldn’t directly hand down everything I knew as a senior to the next batch. This meant, to my horror, that we would lose all our orientation games, culture and traditions.

The pause on physical orientations, like the pandemic, lasted longer than any of us in Singapore thought it would. But soon after graduating, moving out of hall and starting work, I didn’t really think much about it anymore.

Looking back and reflecting after graduating

My junior texting me after we graduated. Oops.

With physical orientations making a comeback in 2022, I had an epiphany recently.

It happened when I was catching up with one of my juniors, who mentioned that she was afraid of me back when I was her senior. It came as a huge shock — I honestly never realised I was toxic until I graduated. It was at that moment where I decided to really reflect on my past actions and think about how I had affected so many others while being blinded by “fun”.

Maybe it’s through adulting, or because I’m no longer in that toxic environment anymore, but seeing my juniors today, I realised strong friendships can still be formed even without having physical orientations. I can’t deny that the concept of “suffering together” is a much easier tactic to forge bonds within strangers, but is there really a need to? We can be encouraging and kind to each other to create bonds, rather than through bullying and humiliation.

Honestly, without the pause, this toxic cycle would have never been broken. Seniors would continue handing down harmful mindsets and activities in the name of “tradition”, and juniors wouldn’t dare to go against them.

In fact, the 2-year pause on physical orientation felt like a chance for me to reflect and grow too — to learn how to treat people around me with respect and not bring this unbearable fear of missing out (FOMO) mindset from university into adulthood.

Till today, I still remain close friends with those I’ve met through orientation. But that doesn’t excuse what I went through and the things I’ve done in the past. In particular, when we compare local universities with private universities, there is a huge gap in how orientation is carried out every year.

Which begs my question: why are local universities trying so hard to keep up the toxic cycle throughout the years? It’s about time, or rather, it’s been long overdue, to take a step back and find out what we’ve been doing wrong in the past.

Hopefully, with physical orientation coming back this year, this is a chance for university orientations to restart with a clean slate. We just have to find that sweet spot that perfectly balances both elements of fun and safety.