Body art has always been a present art form, with some opting for alternative temporary tattoos as a green, short-term way to sport some ink. Now, there’s a permanent version that sits between Jagua and traditional tattoos: vegan tattoos.

No longer reserved for hippies and hipsters, veganism has grown from a fringe movement to mainstream lifestyle. People aren’t just scrutinising their food, but also their clothes, beauty products, and even the ink tattooed into their skin.

To help those who love their body art and cruelty-free lifestyle in equal measure, we interviewed local tattoo artist Anthea Tan, to give us the lowdown on vegan ink.

Driven by ethics and morals, Anthea feels it’s our moral obligation to protect animals from unnecessary suffering. “If we believe all beings should be liberated from pain, we should echo that statement through our professional practices as best we can,” she explains.

“The consumption of animals and their byproducts can negatively impact our health, so why go further by depositing them into our largest organ?” 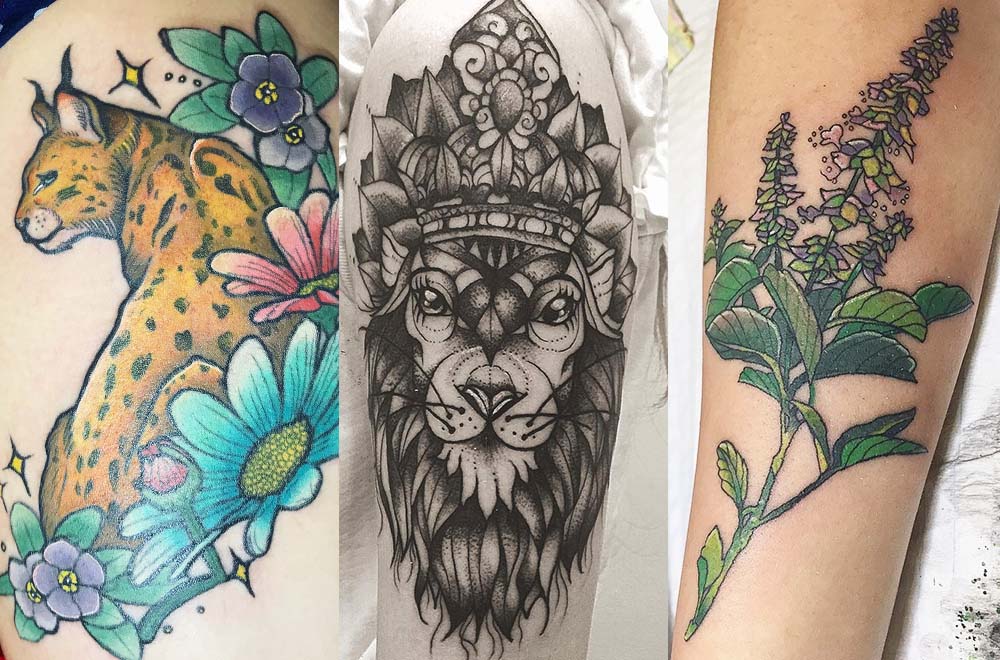 While the exact ingredient list varies, the most common animal products in traditional tattoo ink include bone char, glycerin, gelatin, and shellac.

Bone char is made from burnt animal bones to boost black ink colour, while glycerin is a derivative of animal fats that acts as a stabiliser for the ink. Gelatin and shellac serve as binding agents; the former comes from boiled connective tissues, while the latter is made from crushed insects.

In fact, the entire tattoo process can involve animal products. From the stencil paper, which is made with lanolin and/or beeswax, to the moisture strip on the razor, which contains gelatin, a vegan practice goes beyond the ink.

Like all tattoo artists, her rates are subject to the complexity of the art piece, finishing detail, size, and placement. 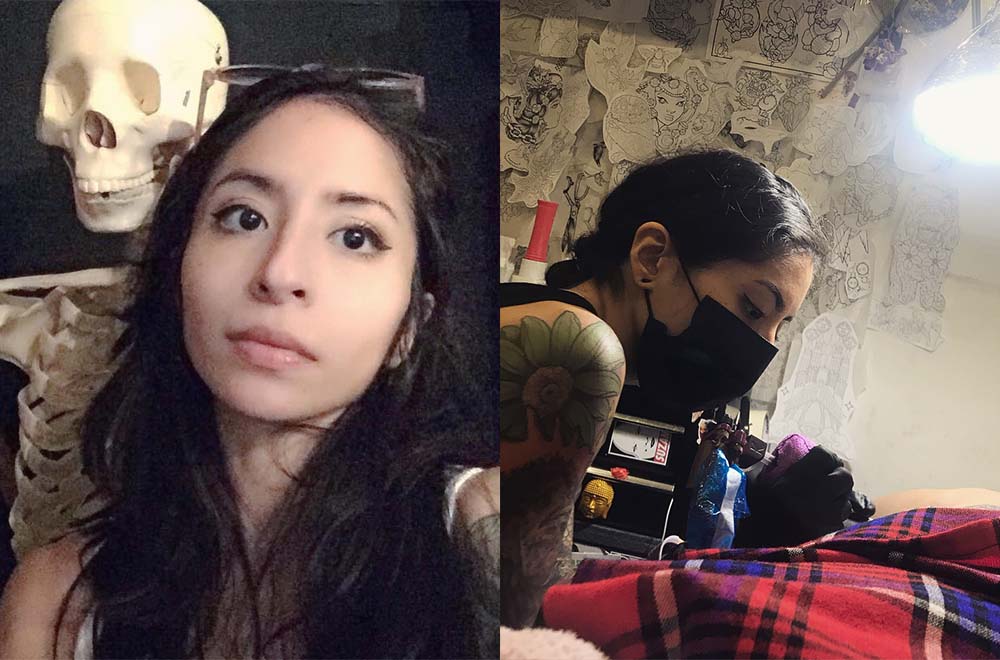 Anthea started her apprenticeship in 2012 with traditional tattoo ink, but took a hiatus shortly after her apprenticeship due to a fibromyalgia and chronic fatigue diagnosis. After resetting her system with a vegan practice, she dove back into tattooing in 2015.

“In 2014, I met my good friend Brian Thomas Wilson, who runs the first fully vegan tattoo parlour, Scapegoat Tattoo, in Portland, Oregon. He inspired me to look into a vegan approach of tattooing,” Anthea recounts.

Is vegan ink safer for our skin and health? Supporting animal rights is a rational reason to get a vegan tattoo, but World Famous Tattoo Ink, a company that sells vegan tattoo ink, claims the ink is “better for immunity and overall health” as well as being “more reliable and safer on skin.”

While Anthea can’t personally vouch for vegan ink’s immunity-protecting properties, she says, “Vegan ink has not changed the way I tattoo, nor do I think it’s superior to regular tattooing. However, it has made me more conscious of the little yet important details we overlook in our lives.”

After some digging, we found that vegan ink poses the same set of health risks that have long been associated with traditional tattoo ink.

According to the U.S. Food and Drug Administration (FDA), the pigments are often developed for car paint, printer toner, and plastics. Both tattoo inks contain potentially carcinogenic chemicals which can cause autoimmune reactions, MRI complications, allergic hypersensitivity, and skin infections.

“Certain inks deposit allergenic and carcinogenic elements into the skin, which upon photodegradation, become absorbed by the lymph nodes,” Anthea adds.

Lymph nodes, the bean-shaped structures in our bodies, filter out substances and produce antibodies to fight infection. When chemicals from tattoo ink accumulate, it could lead to chronically inflamed lymph nodes, but that doesn’t mean you’ll get cancer.

Vegan And Traditional Tattoo Ink Are Not That Different

As ingredient lists are often kept a secret, the FDA doesn’t test vegan or traditional inks unless there’s a safety issue reported. The only thing that might tip the scales in favour of vegan ink is that it doesn’t contain shellac, which can cause contact dermatitis, a type of allergic reaction.

As a non-vegan individual sporting a non-vegan tattoo, getting a vegan one next makes sense to me. I’m all for self-expression through physical decoration. If using vegan ink bears the same amount of risk, opting for a cruelty-free approach softens the blow on my conscience.

“For those who don’t necessarily want to go to a vegan tattooer, there are many common tattoo ink brands out there that are vegan too,” Anthea advises. “You can always check with your tattoo artist or do a quick Google search of the brand to be sure.” 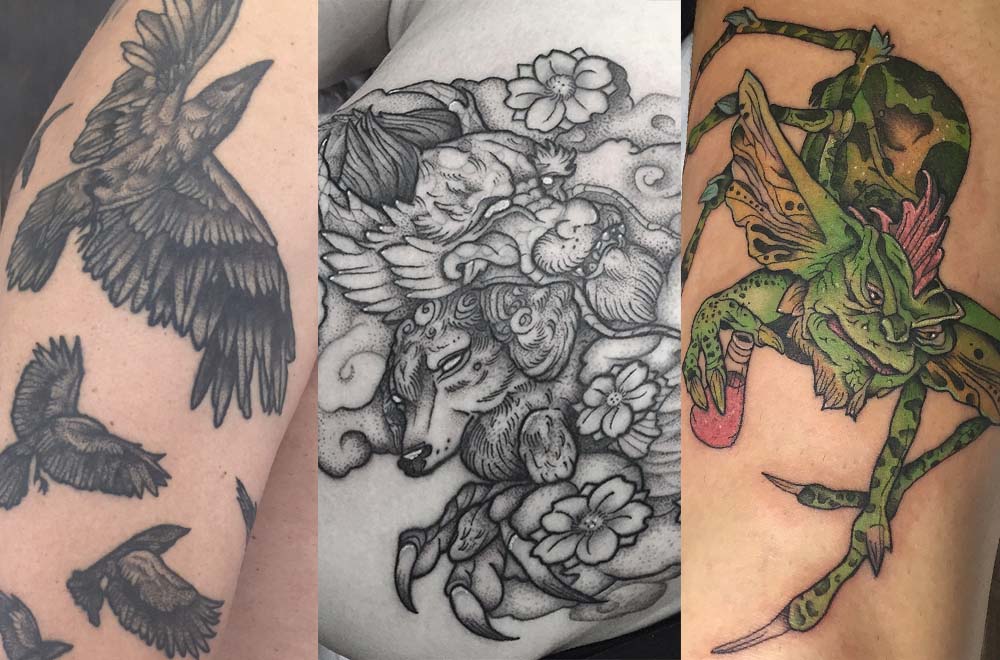 Whether you’re showcasing your commitment to veganism or ensuring your next piece doesn’t conflict with your cruelty-free lifestyle, check out Anthea’s work for some visual inspiration.

Vegan tattoos are a relatively new concept in Singapore; the only other known person who takes a plant-based approach to tattooing is Anthea’s boss, Julian Chia, of Wild Paw Tattoo. He also makes his own natural and vegan cruelty-free aftercare cream they’ll occasionally use during the tattooing procedure in place of Vaseline.

Navigating the local vegan tattooing scene can be tricky, which is why Anthea advises against artists who aren’t vegan themselves. “It is blatant marketing that’s conveniently riding the tails of the current wellness trend, heavily discrediting the effort vegan tattooers have made.”

Together with her friends Amanda Blodøks and Ashley Thomas, Anthea has recently created an Instagram account, @vegantattoos, showcasing vegan tattoos from all around the world. Plus, every artist they feature is a verified vegan.