Pixar has always produced amazing animated films that touch the hearts of all ages. Now, one of their classic animations, Monsters Inc has teamed up with Adidas for a special collection. In lieu of the movie’s 20th anniversary, the collection includes sneakers, basketballs, apparel and football cleats, all in designs of characters we know and love, like Sulley, Mike, Boo and George Sanderson.

Taking inspiration from Sulley, the Adidas Dame 7 EXTPLY comes in aqua blue with purple dots. On the midsole, there are even purple specklings. 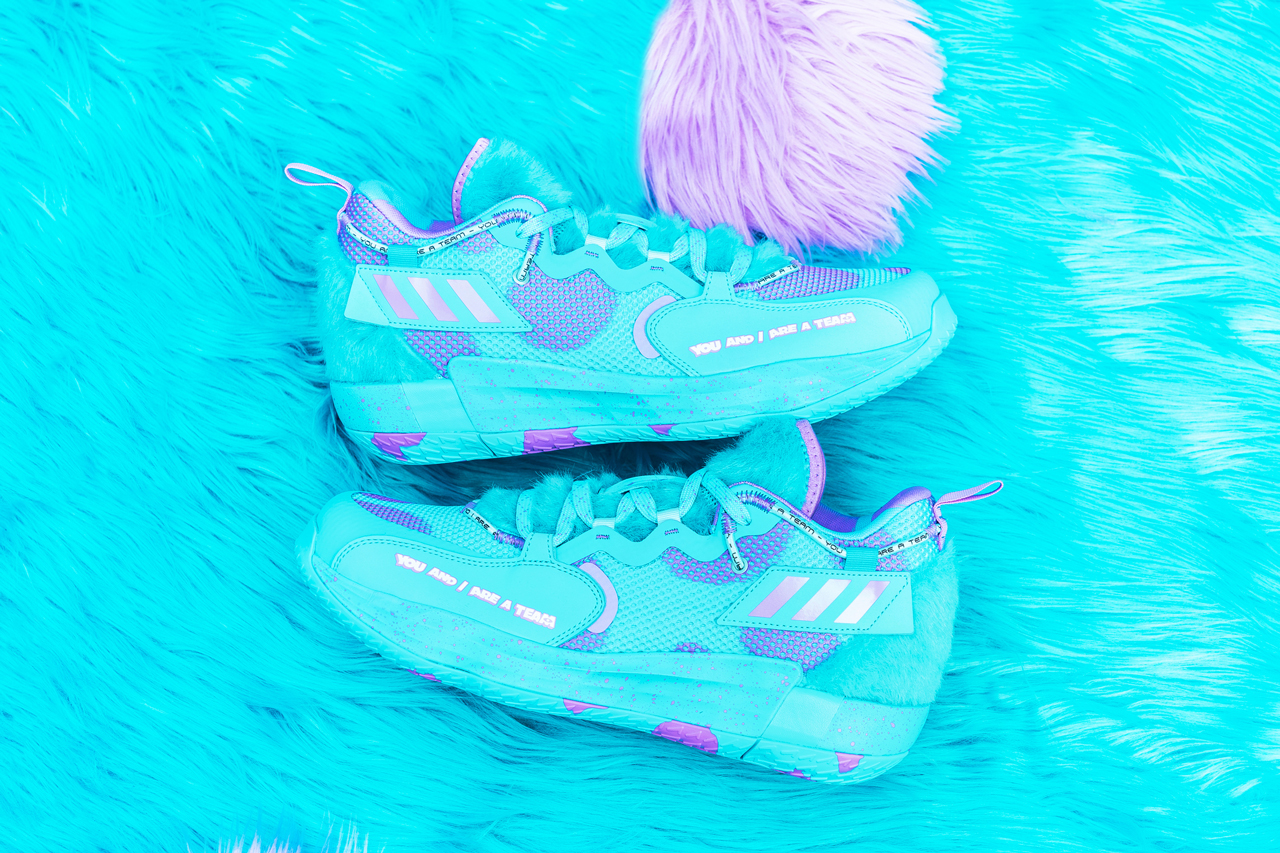 Not missing out on Sulley’s furry details, the sneaker has fur on the tongue and the back heel as well. 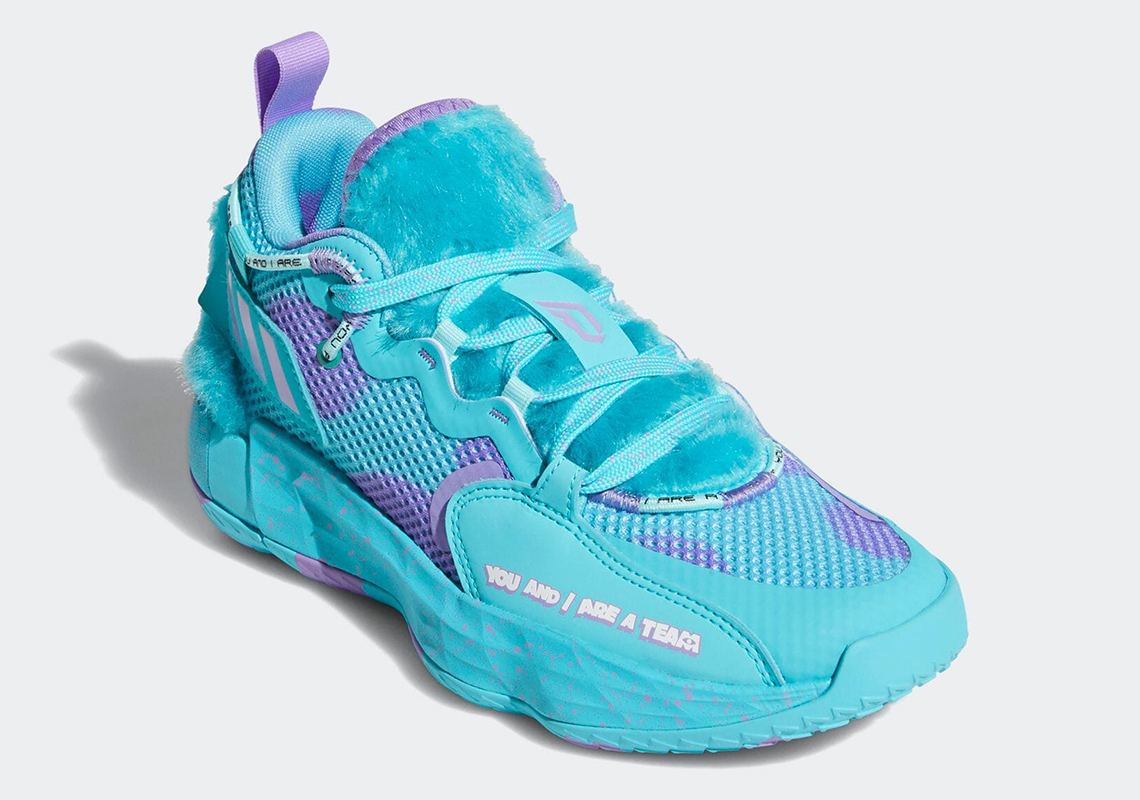 Closing in on the sneaker, Mike’s quote “You and I are a team” is seen on the forefoot as well as on the lining around the ankle ‒ suggesting the strong friendship of Sulley and Mike.

Completing the design, you’ll also notice Sulley’s name “written” on the side of the sneaker.

The Sulley sneakers will be available in adult and children’s sizing.

For those who love eye-catching fashion pieces, you can consider this pair of Adidas D.O.N Issue 3 that is inspired by Mike. It comes in a bright, fluorescent green with black wavy lines on the side of the sneaker. 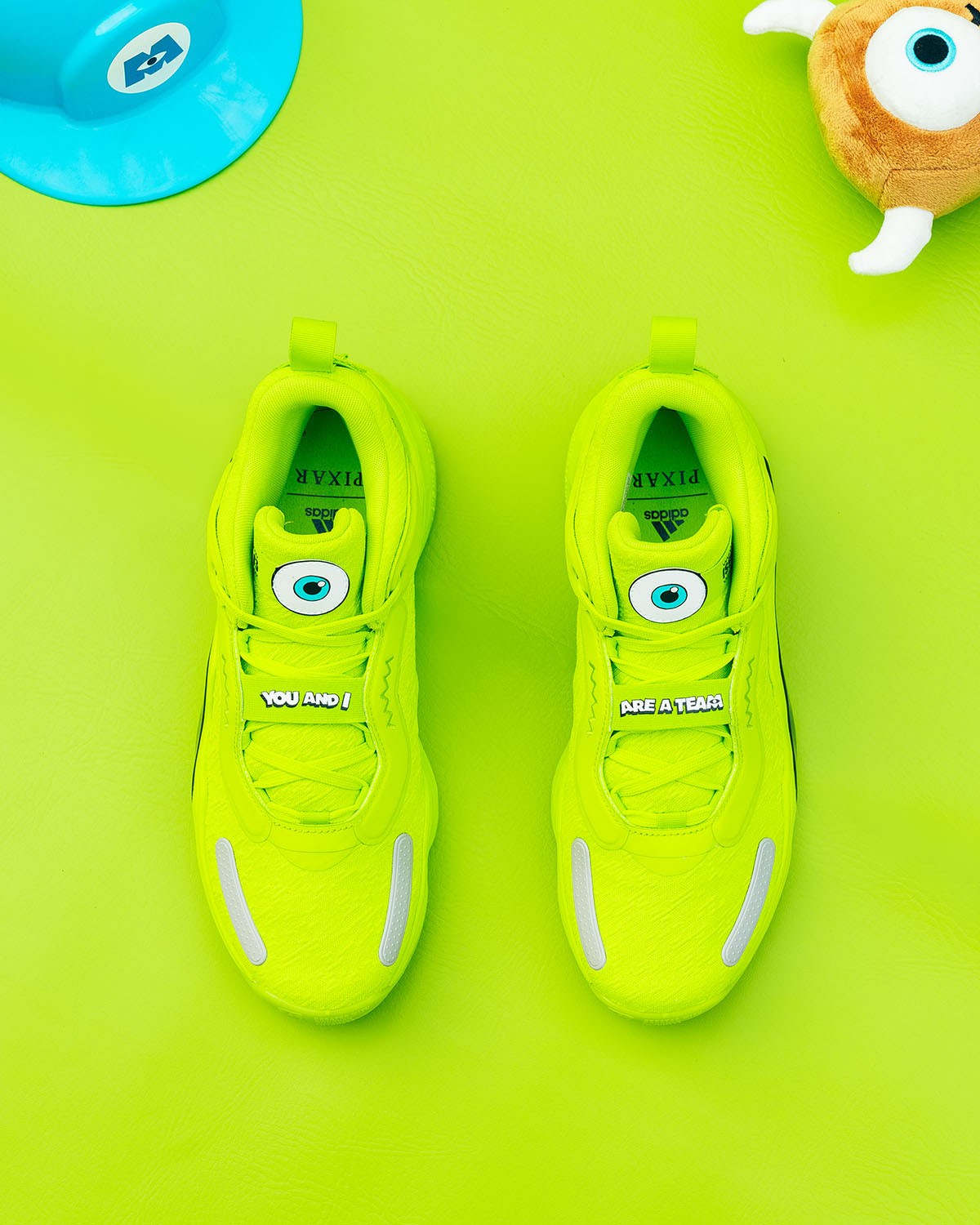 Mike’s singular eye makes an appearance on the tongue ‒ a playful touch on the design. Plus, Mike’s quote once again appears on the elastic straps on both the left and right sneaker.

The Mike sneakers will be available in adult and children’s sizing.

Not many might remember George Sanderson, but he was the monster that was forced to get shaved after coming into contact with a human child. Not once, but several times. The sneaker takes the silhouette of Adidas Forum Low and appears in an orange body with furry details ‒ found on Adidas’s signature stripes and the toebox. 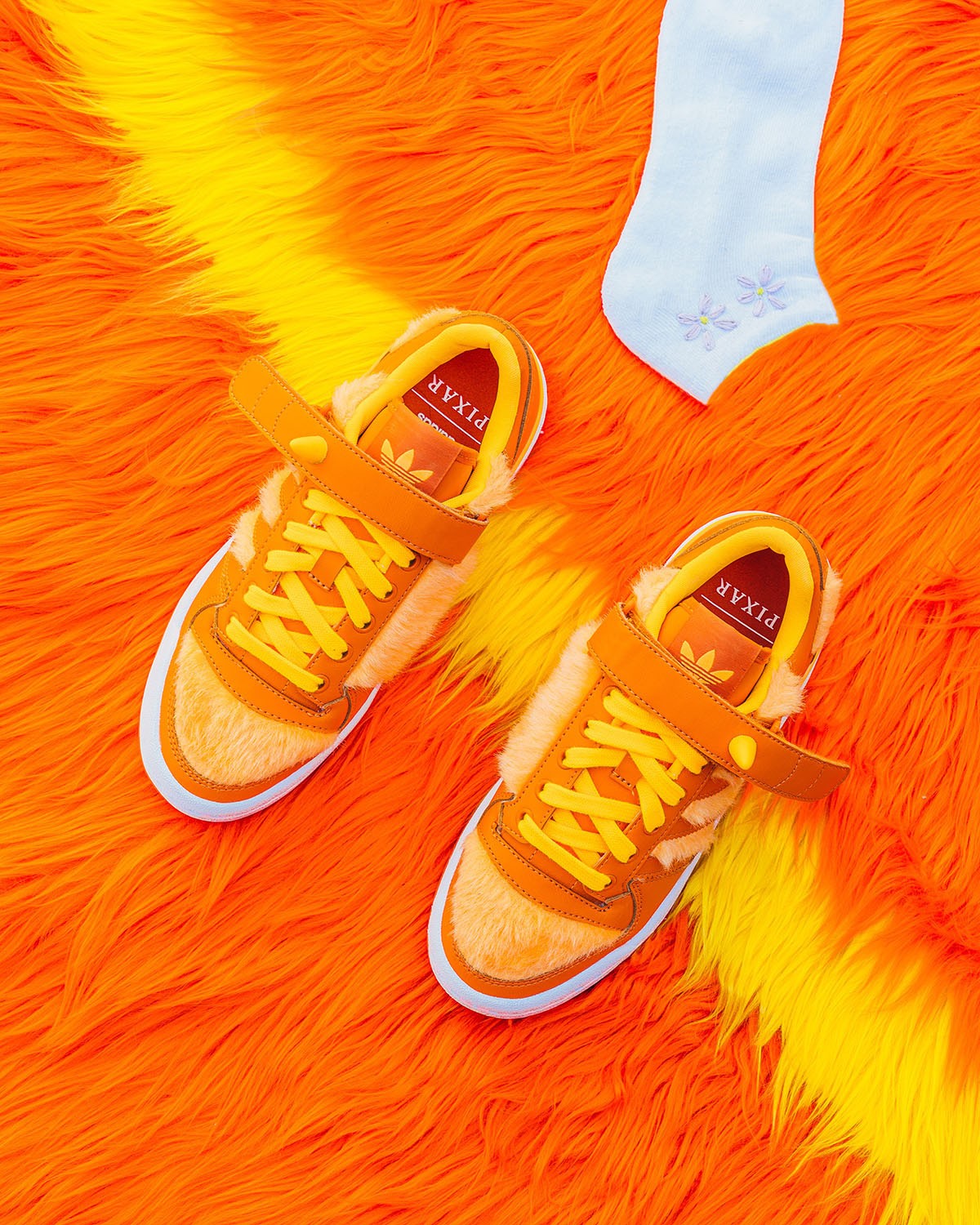 Mimicking the horn George Sanderson has on his head, you’ll find a tiny version of it on the adjustable strap of the sneaker.

The George Sanderson sneakers will be available in children and infant’s sizing.

The final sneaker in the collection is none other than one inspired by Boo, which takes the form of an Adidas NMD. Since the model is known for its daily wear function, this pair of sneakers will suit little ones for a day out and about. It comes in various shades of purple with pink accents on the sides and bottom of the sneaker. On the toe box, the flowers embroidered remind fans of the ones found on Boo’s bedroom door. 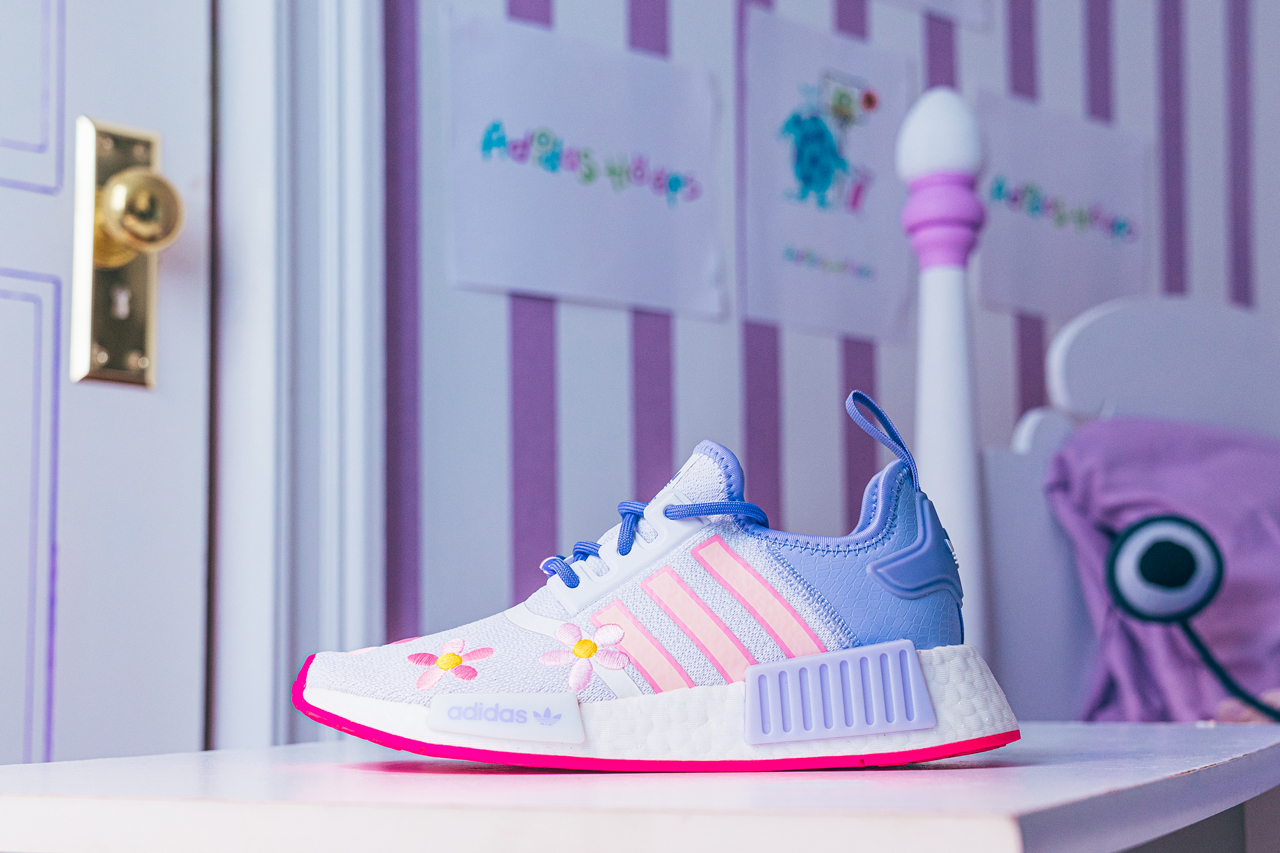 The heel is also inspired by Boo’s scaley costume when she wore it during her time in Monstropolis.

This pair of sneakers will be available in children’s and infant sizing.

There’s no reason why you can’t look good and enjoy a game of football at the same time. Now, you can do so with Monsters Inc-inspired football cleats and receiver gloves.

Adidas adiZero Freak undergoes a makeover and appears in designs similar to the Sulley and Mike sneakers in the collection. 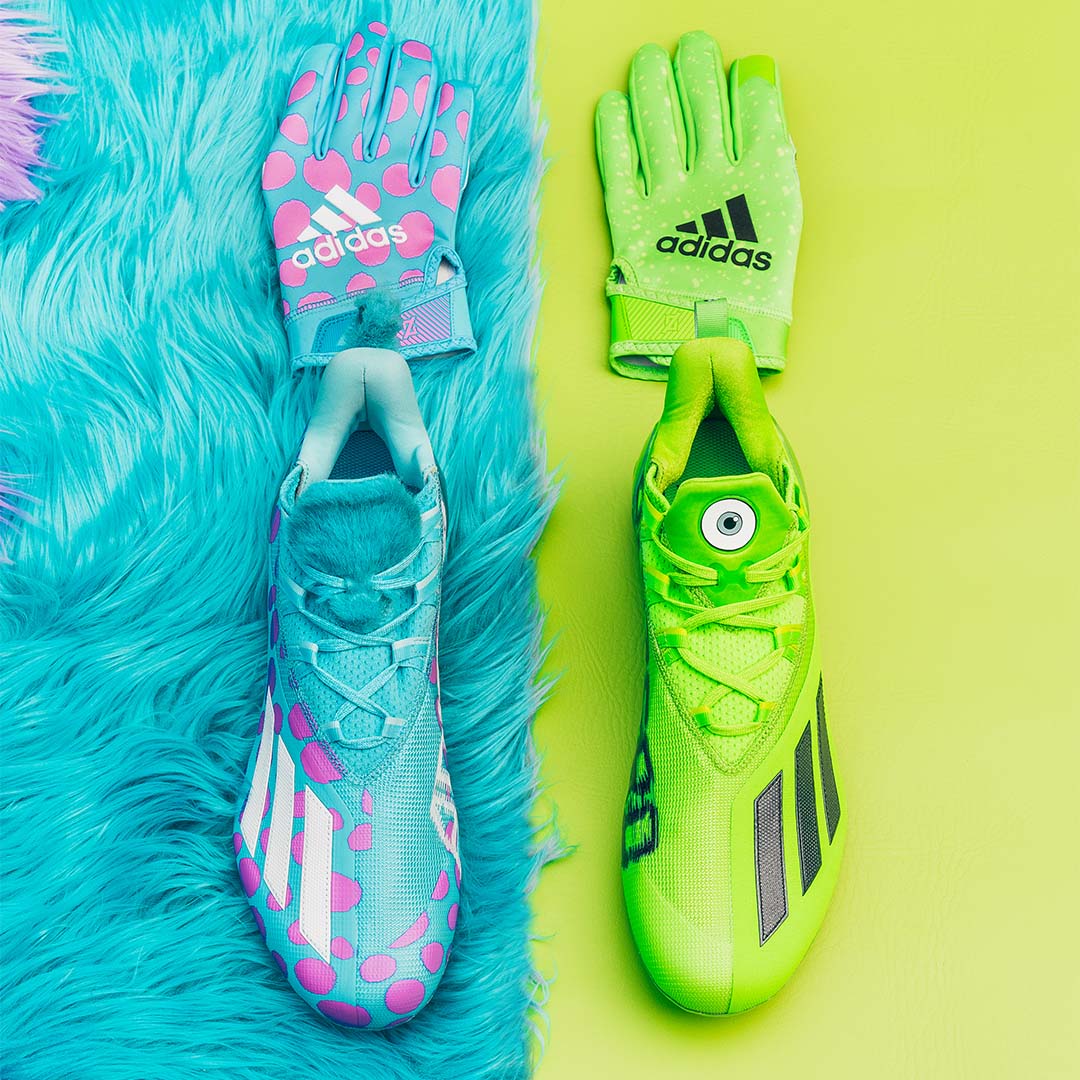 You’ll find fur on the tongue of the football cleat that features Sulley. Plus, it’s hard to miss out on Sulley’s signature purple dots. As for the one with Mike, he makes a bright appearance with the fluorescent green body and singular eye on the tongue. On the sides of each football cleat, the iconic stripes of Adidas appear in white and black ‒ the former being Sulley’s and the latter being Mike’s. 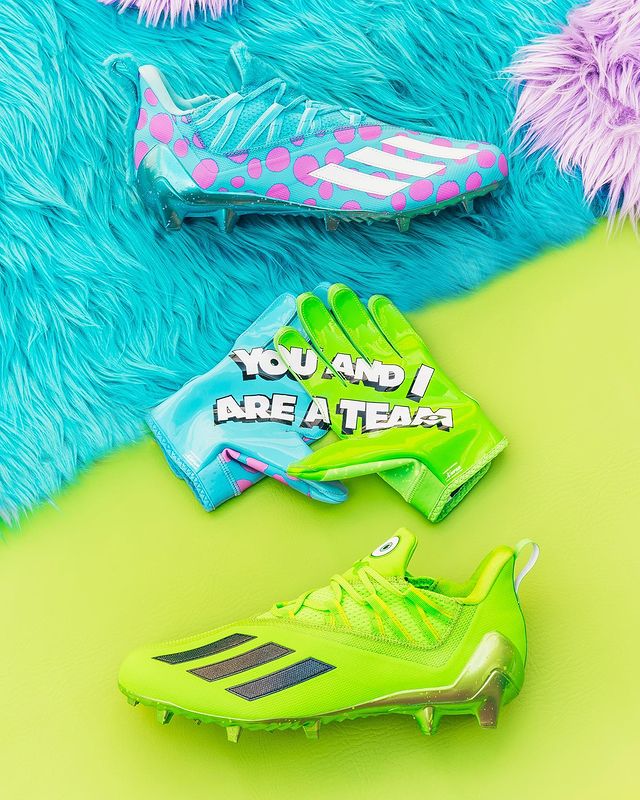 As for the receiver gloves, you’ll notice it reads “You and I are a team” when you put them together when stopping a goal. After all, teamwork truly makes the dream work.

If you’re not up for football, how about a round of basketball instead? In this collection, Adidas also has basketballs in the designs of Sulley and Mike. The one with Sulley comes in aqua blue and features an illustration of Sulley making a “scary” face. 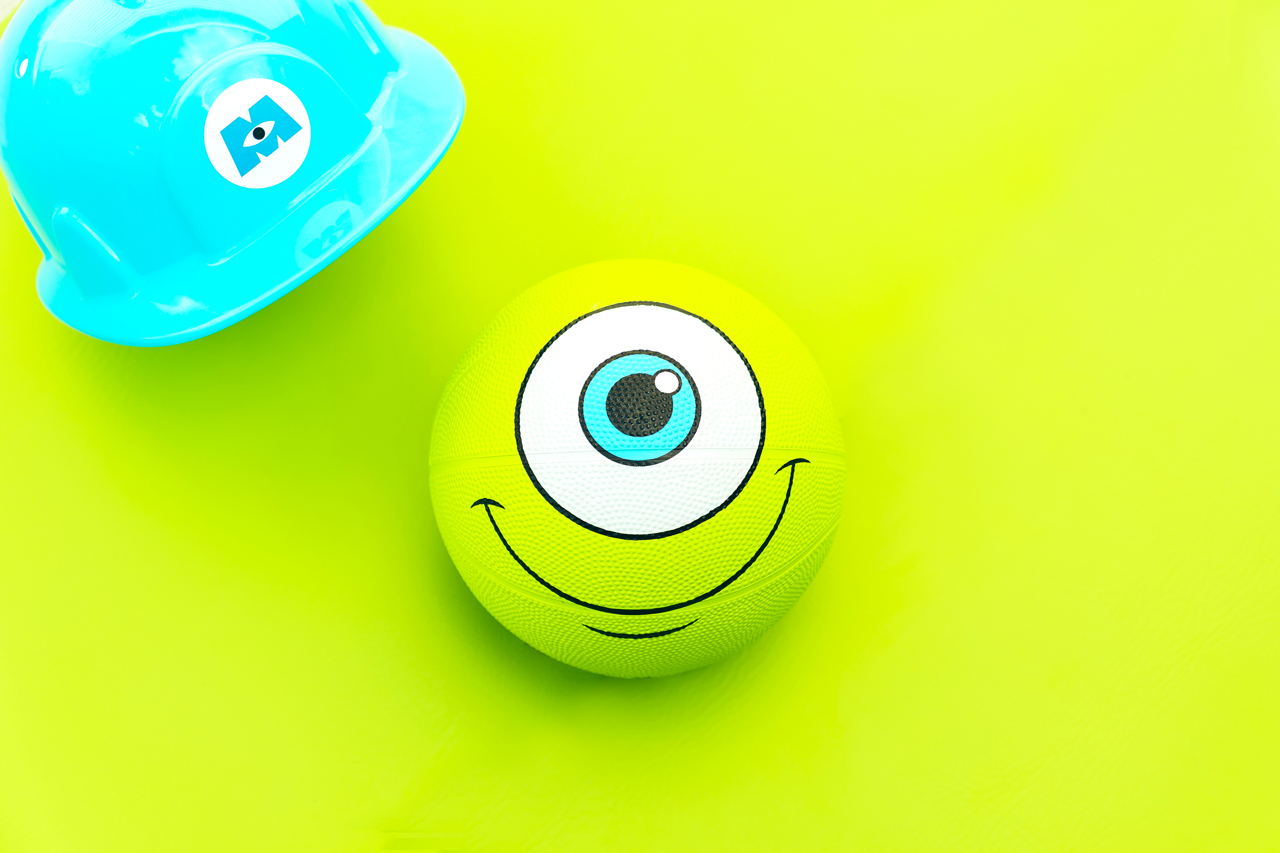 As for the basketball with Mike, his singular eyeball and happy expression will put a smile on your face too. On top of that, its bright colour will probably make it hard for you to misplace it at home.

Another way to show that you’re a Monsters Inc fan is by wearing the apparel that are also included in the collection. Here, you’ll find a black T-shirt with Mike in the middle, leaning against an energy tank while spinning a basketball with only a finger.

Just like how Monsters Inc makes use of children’s laughter to power energy at the end of the film, it has the words “It’s laughter we’re after!” in white. For sweater weather days in Singapore, this Sulley long-sleeve hoodie will keep you warm ‒ as if Sulley is giving you a hug. Once again, it is inspired by Sulley’s aqua blue and comes with purple dots on the sleeves and hood.

Reminisce On Your Childhood With This Adidas x Monsters Inc Collection

The Adidas x Monsters Inc collection is slated to drop globally on 2 dates: 25 September 2021 and 7 October 2021. The first release will include the above items except for the football cleats that will be available on the latter date. Purchases can be made via Adidas’s official online store.

For more Adidas collaborations, you can also check out the Adidas x M&M’s sneakers.

All images courtesy of Adidas.