Last year, adidas and Toy Story released a capsule collection to celebrate the release of Toy Story 4. This year, the sporting giant and Pixar are reuniting for the adidas x Toy Story Friendship Collection. Not because of a new movie, but because it’s been a whopping 25 years since the first Toy Story movie premiered.

Where did the time go? We’ve no idea. But what we can do is give you a sneak peek at the new upcoming sneaker designs before they’re launched.

As much as Toy Story is all about the entire motley crew that makes up Andy’s toys, it’s clear that Woody is the star of the show. Essentially, Woody is Andy’s chou chou. That’s why he gets 2 sneaker designs in the adidas x Toy Story 2020 collection, while everyone else gets 1. 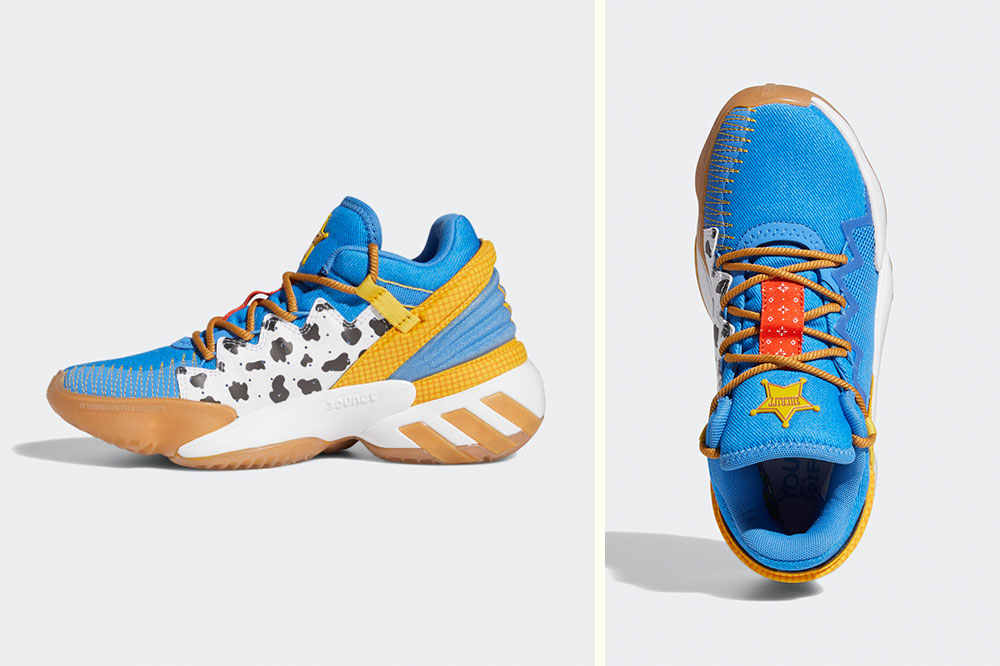 First up, the D.O.N. ISSUE #2 shoes, based on NBA star Donovan Mitchell’s collaborative design with adidas. While there’s no actual image of Woody here, his presence can be felt across every inch of the basketball shoes.

The denim upper, cow print on the sides, bandana print on the tab and Sheriff badge on the tongue scream “Woody”. Andy’s name is also scrawled across the right outsole. 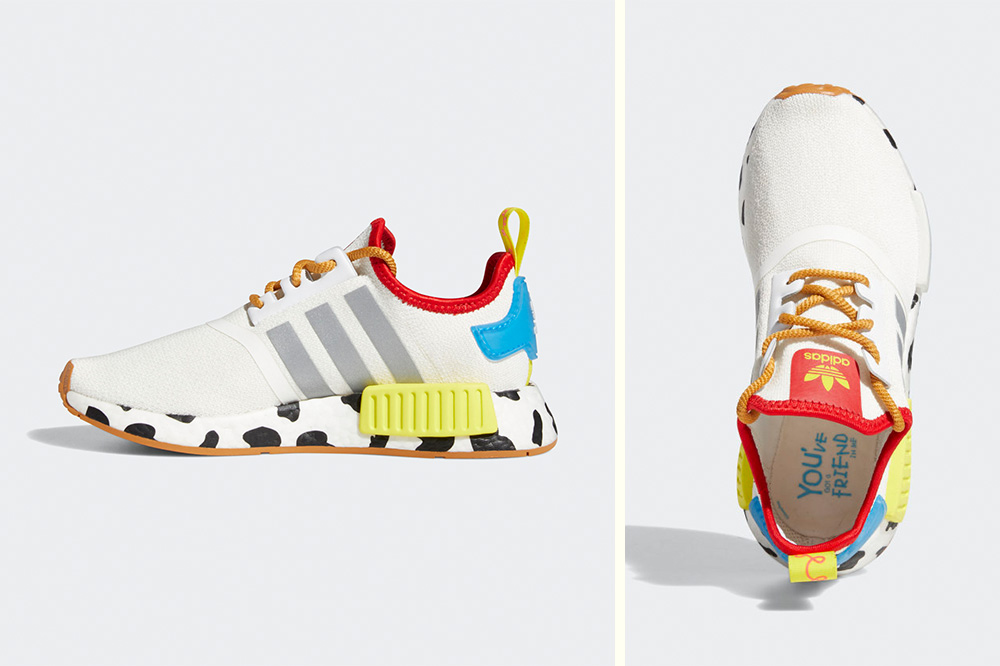 The second sneaker, the NMD_R1 Toy Story shoes, also features the cow print on the midsole. The rope details on the laces, as well as the heel tab, cap off the look.

TBH, while adidas states that this design “call[s] to mind the vest, shirt and jeans of the world’s most lovable pull-string cowboy”, we’d like to think it could also be inspired by Jessie the Yodelling Cowgirl too. 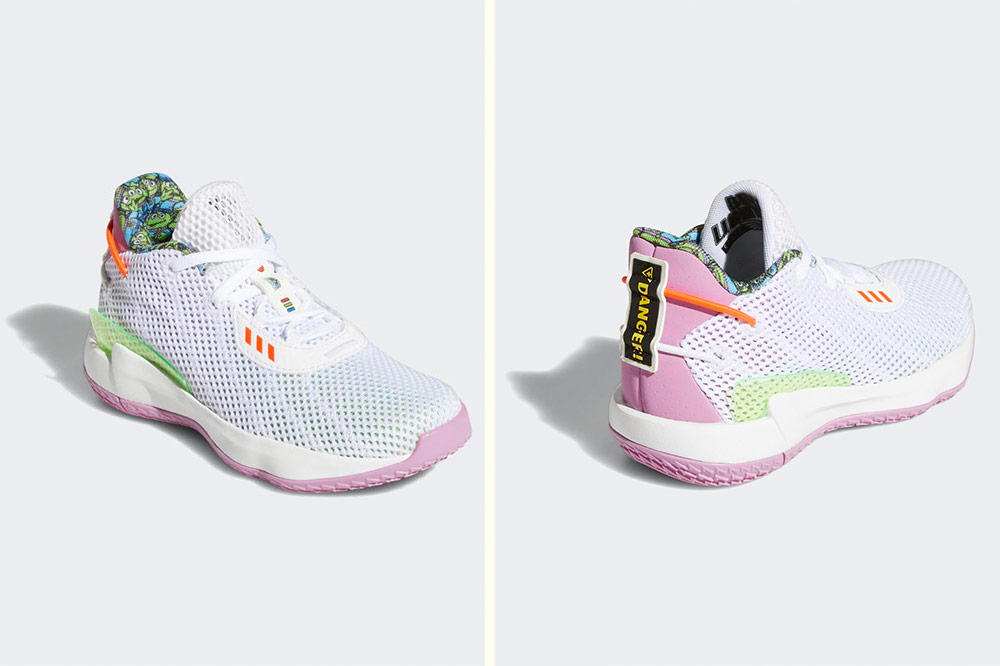 Where there is Woody, there is Buzz Lightyear. Once again, while Buzz himself doesn’t make an appearance, the colours and detailing are enough to make you think of the Space Ranger immediately. The Dame 7 shoes are a collaborative design with another NBA star, Damian Lillard.

As a bonus, the aliens line the cushioning to keep you company on the court. Andy’s name is scrawled across the right outsole on these pair of sneakers too.

The rest of the crew 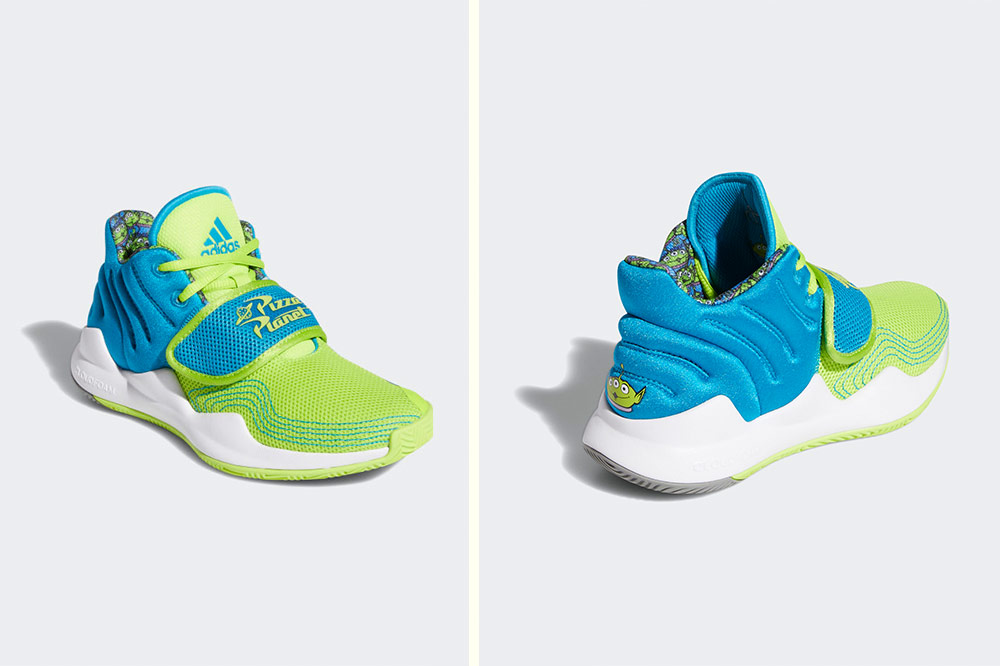 The aliens aren’t just sidekicks to Buzz, of course. For some Toy Story fans, the little green men are the true highlight of the franchise. The Deep Threat Shoes have a futuristic design, and even glow in the dark. 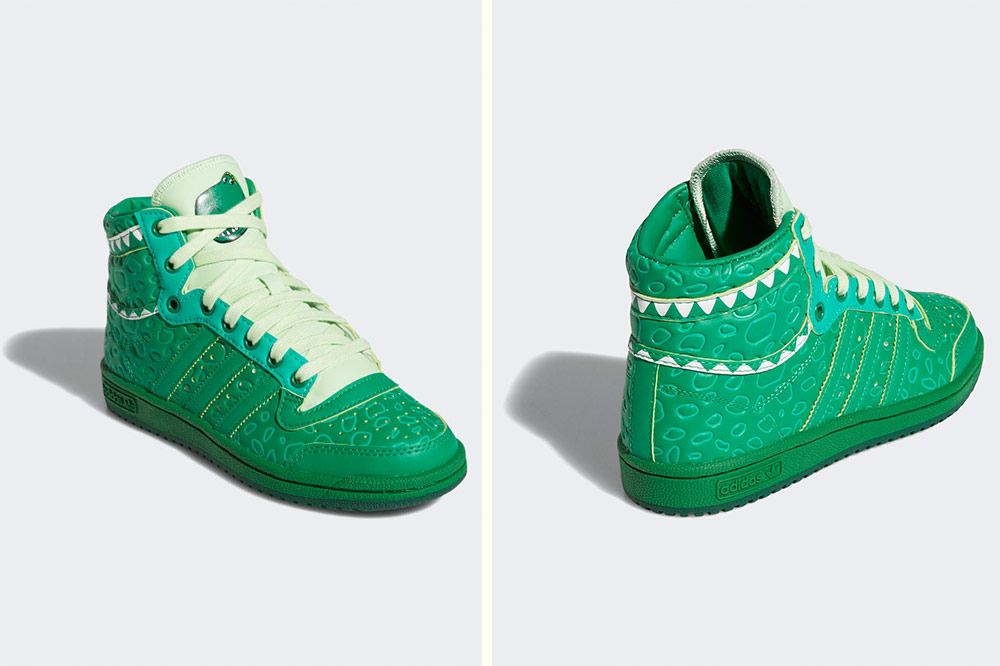 Another green toy who’s creeped his way into the hearts of Toy Story fans is Rex. The dinosaur inspired the Top Ten Hi Toy Story Shoes, based on a basketball shoe from adidas’ archives. The high-top shoe comes in various shades of green, with the debossed details reminiscent of the dino’s body. His sharp teeth also appear in abstract form.

But there’s no mistaking just who the shoe is dedicated to, since his head shows up on the tongue. 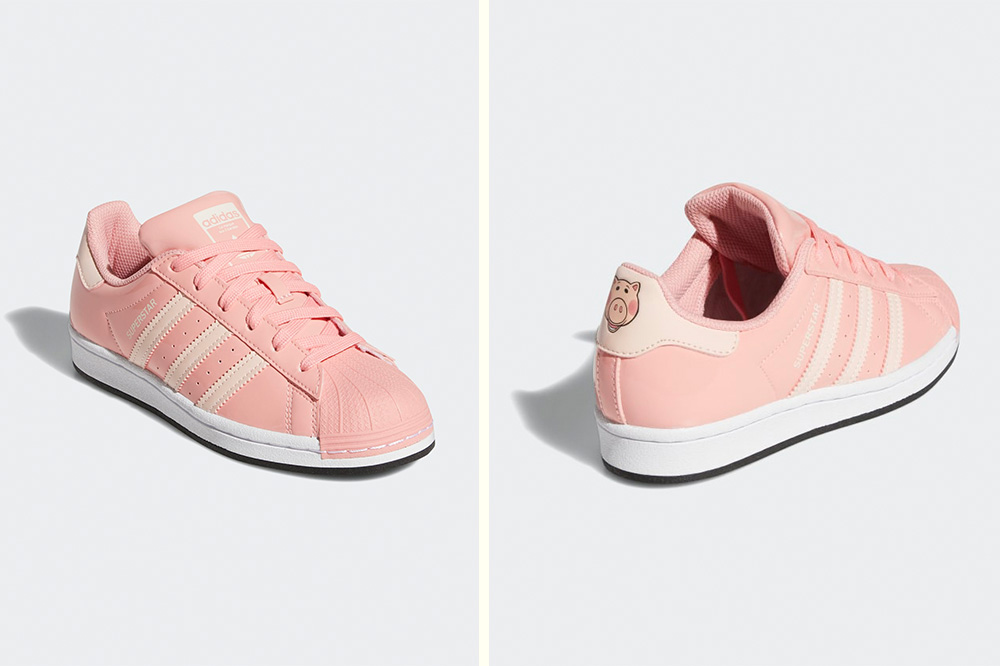 Most of the adidas x Toy Story Friendship Collection consists of basketball shoes, besides the NMD-R1 and this pair of Superstar sneakers. From the front and side, you wouldn’t know the pink shoes are part of the collection either.

But turn to the back, and you’ll see Hamm (or is it Dr. Porkchop?) greeting you from the heel tab.

Here comes the not so fun part: The Adidas x Toy Story Friendship Collection is available in children’s, youth and infant sizes only for now. Get them as a gift for your kids, nieces or nephews; and introduce them to the messages of friendship and teamwork that Toy Story is all about. After all, as adidas shared in a statement, “Now more than ever, this collaboration represents the importance of bringing people together on the court, in the classroom, on the playground and in the world.”

The full selection of sneaker and apparel designs is already up on Adidas U.S’s website. The collection will be available on 15 October 2020 at 7am GMT (3pm SGT). We’ve reached out to a spokesperson from adidas Singapore to find out if the collection will be making its way to our shores.

A Love Letter To My Chou Chou