Remember when Disney’s Ariel and Eric tied the knot and waved to their friends and family on a ship at the end of The Little Mermaid? Yup, that was how I imagined my wedding would be as a young girl ‒ majestic and unforgettable. As a person with an MBTI of INFP, I considered myself an imaginative person, especially when it came to wedding fantasies.

Yet, after helping out my BFF Yvonne* as her bridesmaid over the span of 10 months, my thoughts on initially wanting a big wedding took a surprising 180-degree turn. In fact, the experience taught me lessons I couldn’t learn elsewhere, and it also gave me an insight on planning my own wedding in the future.

Helping out with the proposal 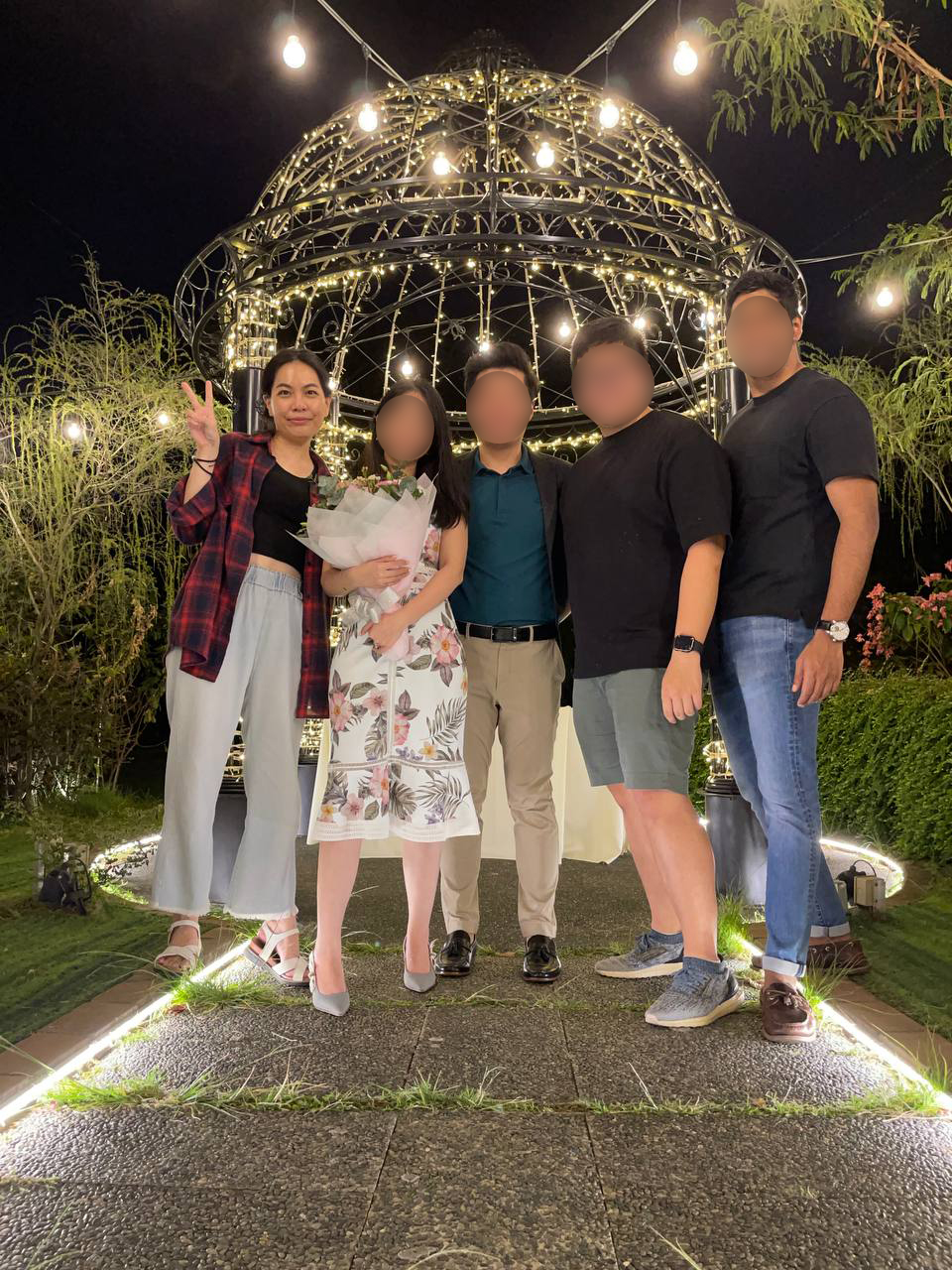 Earlier in January 2022, Yvonne’s then-boyfriend Blake approached me to help out with the proposal. I agreed without hesitation as I’ve known Yvonne since we were 12 years old, and loved to be part of her important milestones in life.

Since we had to adhere to the 5-pax Covid-19 regulation at that time, the team only included Blake’s brother and friend, as well as myself.

I was assigned the task of taking behind-the-scenes videos and photos, whereas the other two supporters had duties like playing the music and coordinating with the restaurant staff. The preparation took about 2 weeks or so, and I excitedly counted down to D-Day. NGL, but when I arrived at the proposal venue I was impressed by how it was tucked away in a private location. From well-decorated fairy lights to an exclusive dome for dining, the set-up made me sure that Yvonne would say “yes”… until I saw someone else’s proposal in another dome next to Blake’s.

It appeared that they hired a professional event vendor, as we saw elaborate decorations like balloons and fresh flowers for the bride-to-be. Yet, we didn’t let the inevitable comparison discourage us, and we were set on making Blake’s proposal as unforgettable as he imagined.

Soon enough, Blake and Yvonne arrived and the rest of us tried to hide from their sight by blending in as diners in another section of the restaurant. We waited for Blake’s cue to kickstart the mission and soon enough, we were “activated”.

Although not everything followed according to the plan ‒ the background music stopped before Blake went down on one knee ‒ I was overjoyed that Yvonne said “yes”. Looking back on the experience now, it was the small hiccups that made the proposal memorable.

Being an assistant during the pre-wedding photoshoot Group photo after the pre-wedding photoshoot

My next bridesmaid duty came only a few months later ‒ Yvonne’s pre-wedding photoshoot. I was once again delighted to be her right-hand woman alongside another bridesmaid, since it gave me a good learning experience about wedding photoshoots. Plus, I had more than enough annual leaves to spare a day off to help out.

Unlike the marriage proposal, I wasn’t assigned a specific role but assisted Yvonne whenever she needed help like switching from her heels to flats and tidying up her hair.

Since we also needed to travel to three different locations for the photoshoot within a tight time frame, they rented a minibus for us to get around easily. It was a blessing really, since the entire shoot took more than 6 hours and I was exhausted AF by the end of it.

It was then that it hit me how much more tired Yvonne and Blake were, and made me rethink if I was up for the physical drain on top of continuously smiling and posing for my own photoshoot in the future.

That’s not all ‒ I would also have to consider rental fees for locations and transport, come up with wet weather plans, and coordinate with various people. I finally understood why people were stressed out before their wedding, as previously, I was blinded by the appeal of the actual ceremony that I never thought about the process that went behind it.

I also noticed that every time my other bridesmaid and I gathered for our monthly catchup sesh, Yvonne would voice her worry about her wedding plans. It was obvious that she was subconsciously stressed ‒ from the ordering of bridesmaid dresses to finalising floral decorations, her to-do list never seemed to end. The pre-wedding photoshoot was really just the beginning.

Ultimately, we knew she wanted a perfect wedding, and there was absolutely nothing wrong with that. The best we could do was to offer suggestions for her to consider and show support whenever she needed it.

Holding a hen’s night prior to the wedding 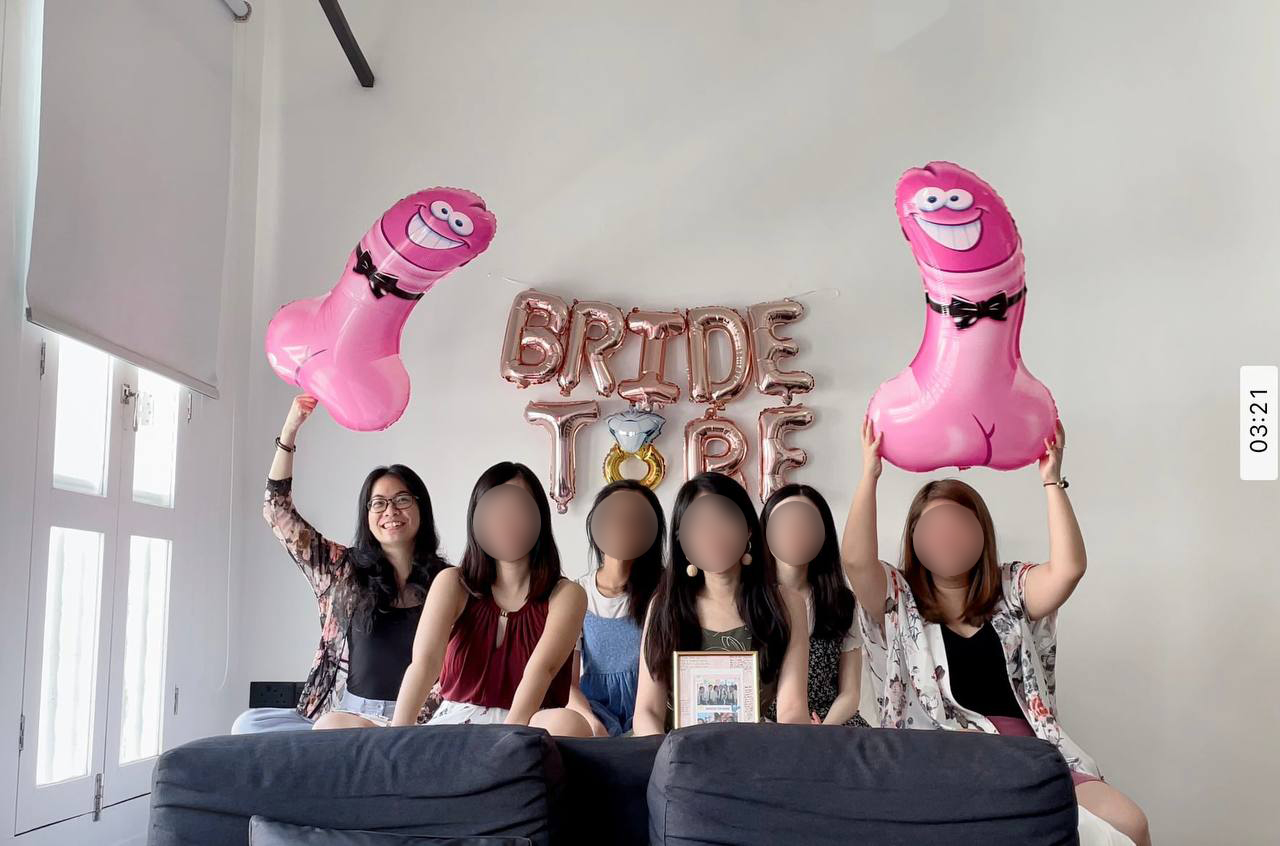 Hen’s night with the rest of the bridesmaids

A bachelorette party aka hen’s night is a rite of passage for most brides-to-be, Yvonne included. That said, we decided to go for a staycay since it would be nice to have our own private space to hang out one last time before her salutation became “Mrs”.

Since it was a lil’ basic with just basic balloons and flowers, we decided to order cheeky decorations like penis-shaped balloons, and a hilarious penis-shaped straw to spice things up. As expected, Yvonne LOL-ed when she saw the way we jazzed up the room.

Apart from having a good laugh together, we went to dinner at a Japanese fusion restaurant and indulged our taste buds to a good meal. I’ve heard of friends having to fork out hundreds of dollars each on lavish getaways or yacht parties for their bride-to-be BFFs, but for the sake of my wallet, I was relieved that the cost at the end of the celebration amounted to just $82 per pax, including accommodation and dinner.

Initially, I was worried that the lack of activities would make the hen’s night boring too. But as cliché as it sounded, we only needed each other for a memorable night. Our laidback itinerary allowed us to reminisce about the simple days when we were hanging out as secondary school students, and we didn’t even need to burn a hole in our pocket to make Yvonne’s day. 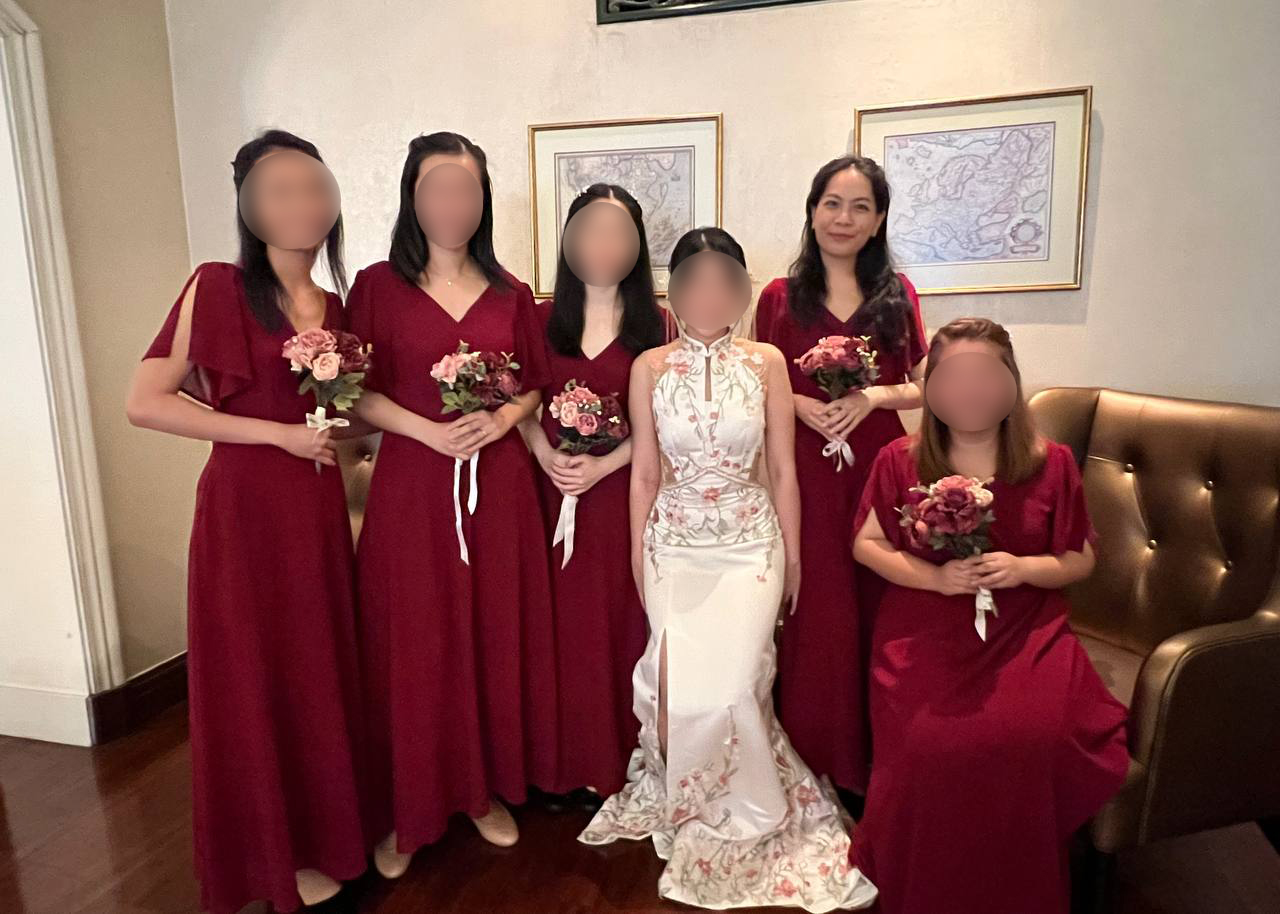 As the saying goes: “expect the unexpected”. Two days before the actual wedding, the stomach flu hit me without warning. It was heartbreaking for me to update Yvonne about my health condition, especially when I knew she already had so many things on her plate.

The sudden change in “bridesmaid-power” caused Yvonne to assign my original duties such as quality checking the photo booth and liaising with the vendors on the wedding day to another bridesmaid instead. I definitely felt apologetic and that I was disappointing my friend, especially when we had spent an arduous 10 months planning her big day together.

My priority? To recover ASAP because I knew I would regret it if I wasn’t even able to make it to the solemnisation. So over the next two days, I prayed for my speedy recovery, and thank goodness, my prayers worked.

While I wasn’t feeling 100% myself, I was able to head down to the wedding venue without looking like a walking corpse. I tried to help out as much as I could but the hectic atmosphere drained my energy quickly ‒ the previous wedding ceremony before Yvonne’s ended later than the stated time and the hotel staff were rushing to clear the banquet. Just another con I realised about having a hotel wedding.

Despite the tight timeline, we were able to squeeze in a short rehearsal before the solemnisation and rush-snapped photos together with the bride and groom. Now that everything was set in place, the solemnisation and tea ceremony went by smoothly ‒ Yvonne and Blake were officially announced as Mr and Mrs.

While the wedding banquet signalled the end of my journey as a bridesmaid, Yvonne and Blake were still far from the finishing line.

They had to entertain guests and went to all the tables to do a traditional Chinese “yam seng” without having the time to sit down and eat. While it was the norm for couples to do so at weddings, I felt that it probably would have been less tiring if there were fewer than the approximately 230 guests they invited.

Nonetheless, my first time as a bridesmaid was a tiring yet fulfilling experience. From their wedding proposal to the big day, the 10-month journey went by faster than I realised.

Changing my mind about having a big wedding for myself My boyfriend and I at Yvonne’s wedding

Many times when Yvonne was planning her wedding, it did make me think about my own in the future. Although I can’t speak entirely for my boyfriend, I know that having a big wedding is no longer my dream due to practical reasons like the exorbitant cost of around $30-50k ‒ I much rather spend that sum on travelling to countries I’ve never been to before.

Sure, a wedding only happens once in a lifetime ‒ for most people ‒ but I don’t believe that you need to splurge to make it memorable. You only need your close ones, and perhaps good food to make the occasion special.

While big weddings are undeniably still common these days, I feel that most couples have them because of traditional reasons like pleasing the elderly and having an “image”. As my parents only had a small wedding back then, I’m glad that they would understand where I would be coming from in wanting something similar, especially since inflation is in full swing.

Since most big wedding venues also require you to fill up a certain amount of tables to secure a date as well, it made me think about my future wedding guests. Chances are, I would have to invite people I barely know just to hit the minimum capacity. Ugh.

At the end of the day, it all boils down to personal preference whether to have a big wedding or not. The larger scale it is, the more details you would have to oversee, which in turn would lead to added stress.

While I’m grateful that Yvonne wasn’t a bridezilla one bit, I can’t say with confidence that I wouldn’t be one wanting my wedding to go off without a hitch. And that thought alone makes me think a small, intimate setting would be so much better.

Prior to being involved in Yvonne and Blake’s wedding, I really had no idea that planning a wedding was that tedious. It was my role as a bridesmaid that gave me a firsthand insight into what it was like to have a big wedding in a hotel, and the sheer amount of work that went on behind the scenes.

While the fairy tale wedding scenes in Disney movies and K-dramas still set my heart aflutter at times, perhaps they’ll firmly remain as just a fantasy for me. And I’m completely content with that.

All images courtesy of the writer.