As kids of the 21st century, watching cartoons was a huge part of our childhood. Nothing beats coming home after a long day of school and lounging on the sofa with your eyes glued to the TV screen. Interestingly, as we grow older and discover changes within ourselves and in society, cartoons have also adapted to be more inclusive today.

From classic cartoons like The Powerpuff Girls with subtly queer characters to lesbian marriages in We Bare Bears, we’ve compiled 15 woke cartoons from the past and present that we absolutely stan.

1. Him — The Powerpuff Girls 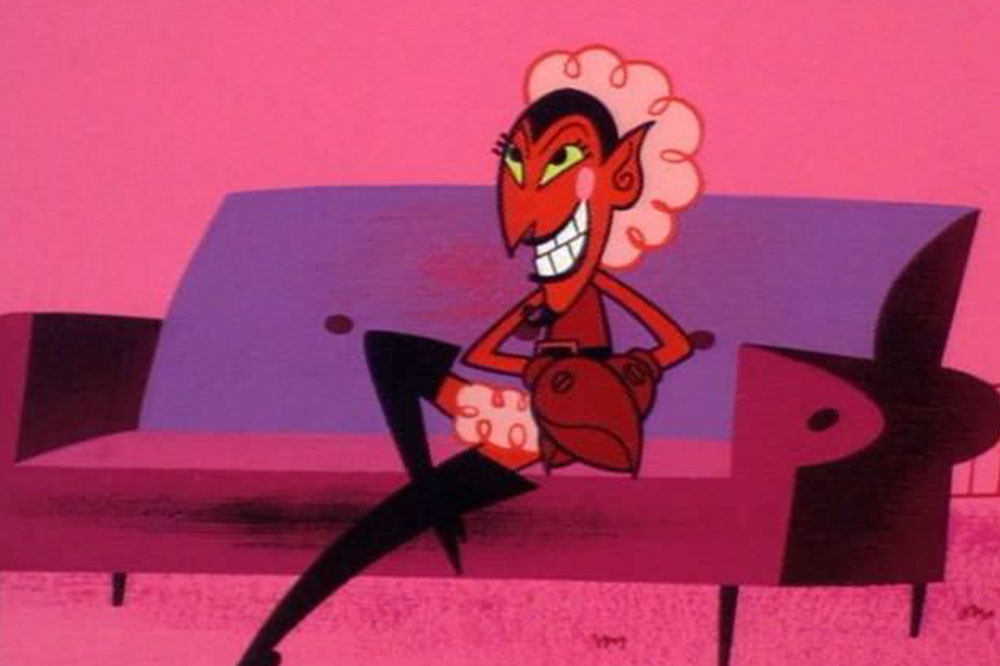 Masculine traits? Check. Feminine traits? Also check. With a name that suggests he identifies as a male, yet is always seen with makeup and heels on top of a curly beard, Him from The Powerpuff Girls might actually be genderfluid.

That’s not all, the iconic villain is also known to change his voice often — sometimes it’s deep and scary, whereas other times, it’s high pitched and sweet. But is it problematic that this queer character is presented as a villian to kids though? That’s another topic to explore next time. 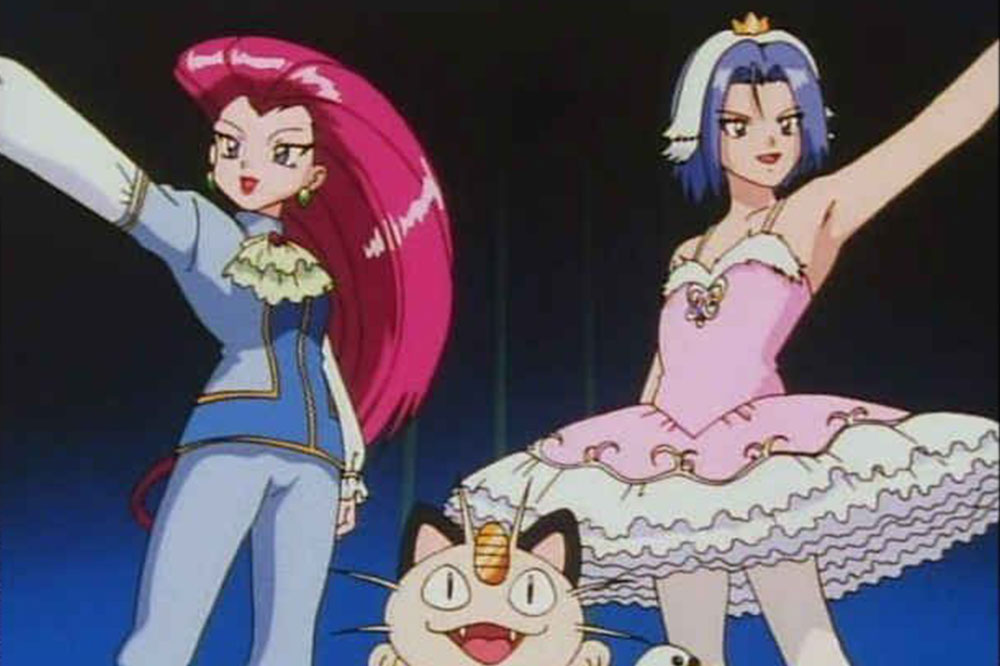 Prepare for trouble, and make it double. Jessie and James from Pokémon are certainly double the icons, since the pair tend to go undercover and switch up their appearances beyond the gender norm.

Jessie is always the one wearing masculine outfits, putting her long hair up and wearing pants, whereas James isn’t shy to showcase his feminine side with dresses and wigs. 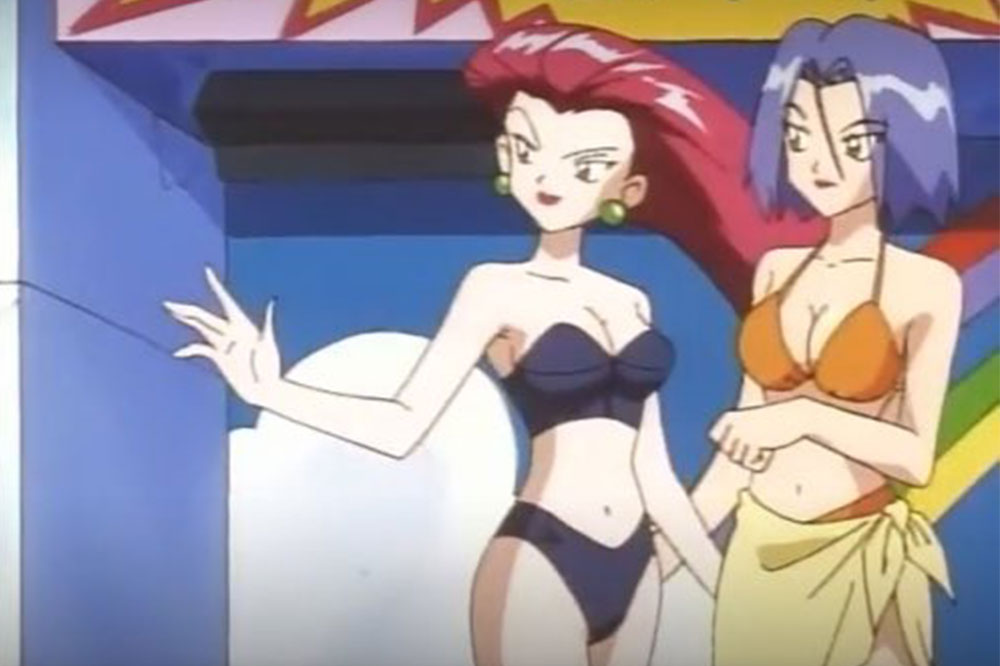 Perhaps one of James’ most drastic outfit swaps was when he wore a bikini with inflatable breasts to compete in a beauty contest. While his extra large chest came as a shock to many viewers, nobody in the show batted an eye — including Misty, who complained that her chest was flatter in comparison to James’.

James’ chest might have been a little too obscene for kids though, as according to Decider, this episode has been banned on Netflix.

Meowth, that’s right — from a young age, Pokémon taught us that we can wear whatever we want, regardless of our gender. 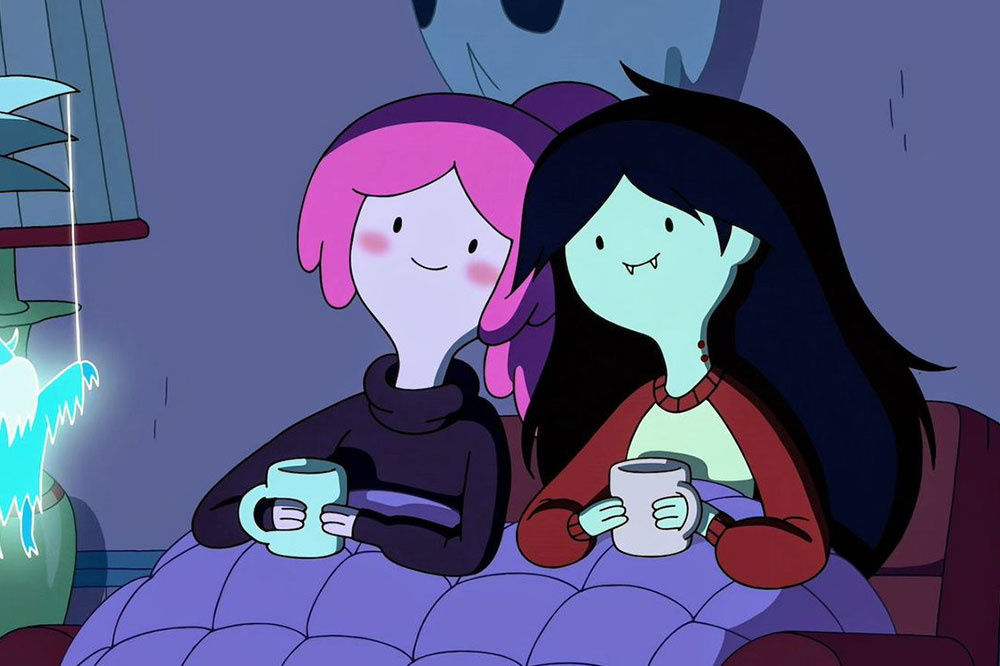 Scoot over, Jake. In the series finale of the show, Princess Bubblegum and Marceline the Vampire Queen shared an on-screen kiss after defeating an enemy. While it was constantly hinted that the two had some tension, this scene sealed the deal. 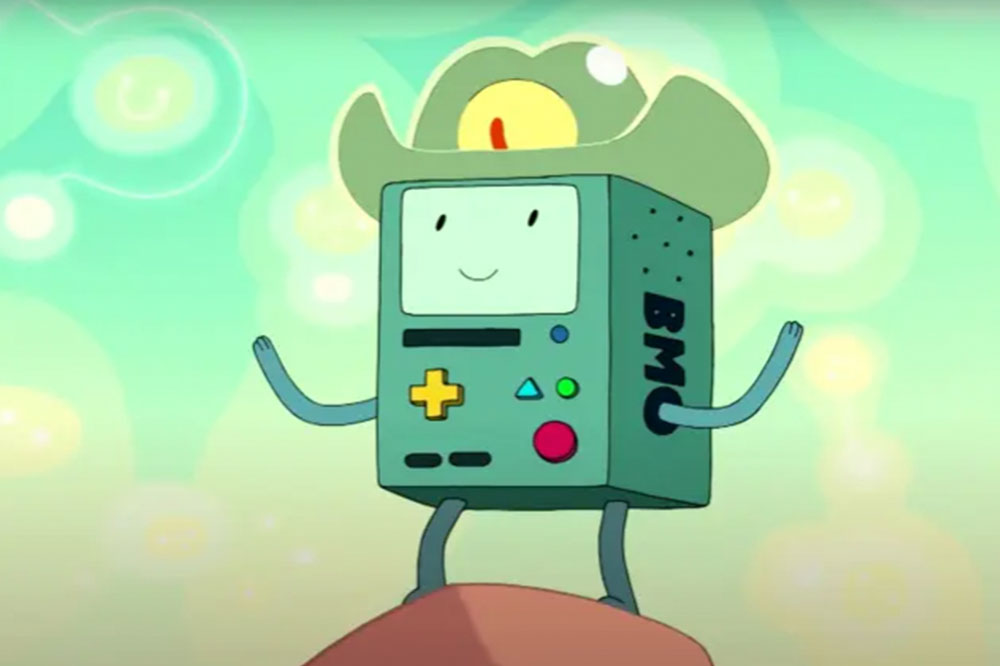 Before you come after us, we do know that BMO from Adventure Time is essentially a game console and has no sex. But throughout the show, BMO showed that they’re okay with any pronouns, no matter if it’s he, she or they.

In an episode where all the characters were gender-swapped, BMO remained with no noticeable differences, proving that they have no gender. All in all, BMO is just happy to be here — a genderfluid icon this generation deserves. 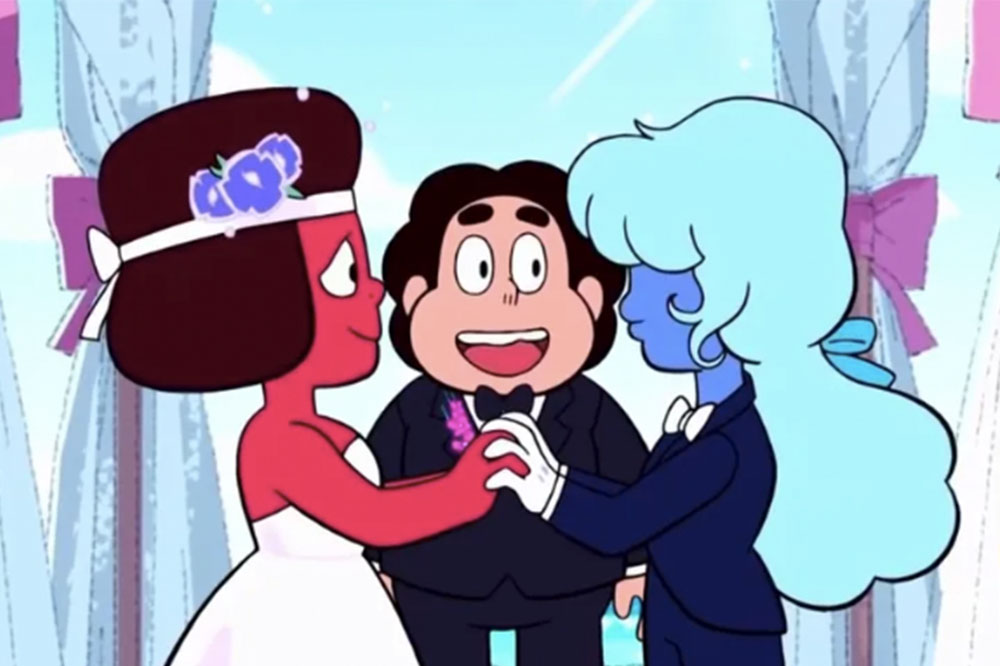 Steven Universe is one of the most visibly queer cartoons to date, featuring lesbian, gay and pansexual characters. The show also made history by airing the very first lesbian wedding scene on Cartoon Network, featuring Ruby and Sapphire. Not to mention, Sapphire was also decked out in a tux instead of a traditional white gown for brides.

Our biggest takeaway? Steven’s heartwarming song in this episode, where he sings “there’s an awful lot of things we could be thinking of, but for one day, let’s only think about love”. If we could pinpoint a show that best represents Gen Z kids today, We Bare Bears is at the top of our list. On top of Panda’s obsession with selfies and dating apps, this adorable cartoon also featured a small cut scene of a married lesbian couple.

Working their new jobs as taxi drivers, one of the bears had customers who were this married lesbian couple. All three bears we dressed up for the occasion while fetching them on their backs, complete with cute bowties and flowers to celebrate. 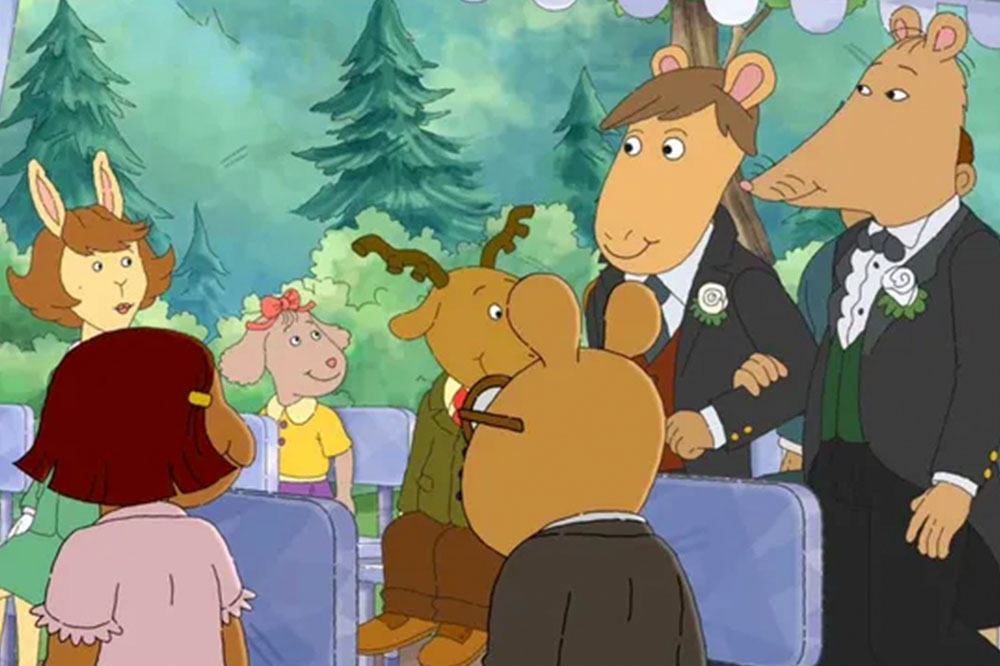 Arthur is a familiar cartoon to 90s kids, and the long running show has definitely grown up with us over the years. In a 2019 episode named “Mr Ratburn and the Special Someone”, it was revealed that Arthur’s male teacher was marrying a male character.

Surprising his students who were trying to matchmake him with other female characters, Mr Ratburn walked hand in hand with Patrick, the local chocolatier. No judgement was passed during the wedding either, with Arthur exclaiming “Mr Ratburn is married, I still can’t believe it!”

8. Jenny — My Life As A Teenage Robot 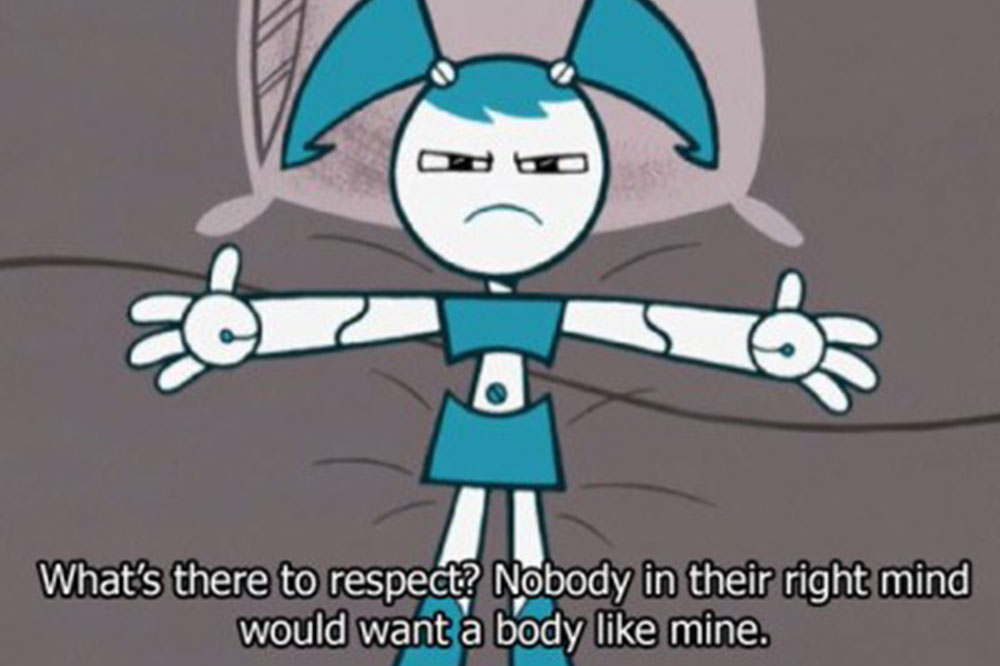 Though Jenny from My Life As A Teenage Robot is “born” a robot, she shares many struggles that transgender individuals can relate to. She was created and named “XJ9”, renamed herself to Jenny, and got angry when her mother referred to her by her dead name.

Throughout the show, Jenny can’t fit in with her friends because she’s not a “real” girl. She also finds it hard to respect and love her body because it isn’t what she hopes it to be — a relatable sentiment in the transgender community.

9. Korra and Asami — The Legend Of Korra 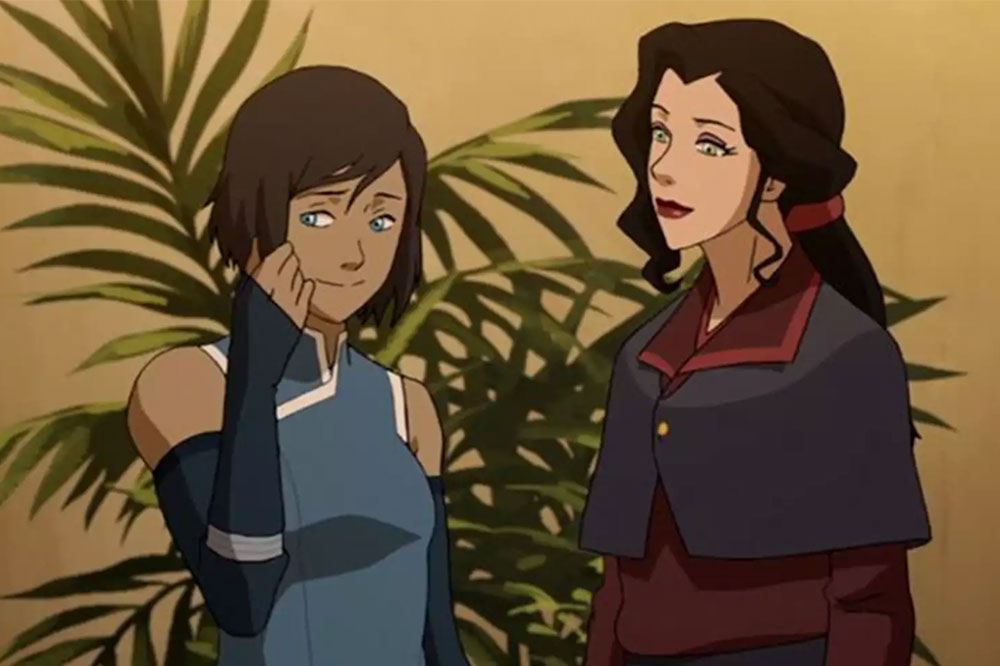 Watching Korra and Asami awkwardly dance around each other almost made me grab the TV and yell “just kiss already!” in frustration. While there’s a lot of heavily implied crushing going on between the two, there isn’t any evidence that they dated — even if the season finale ended with them holding hands and gazing lovingly at each other. 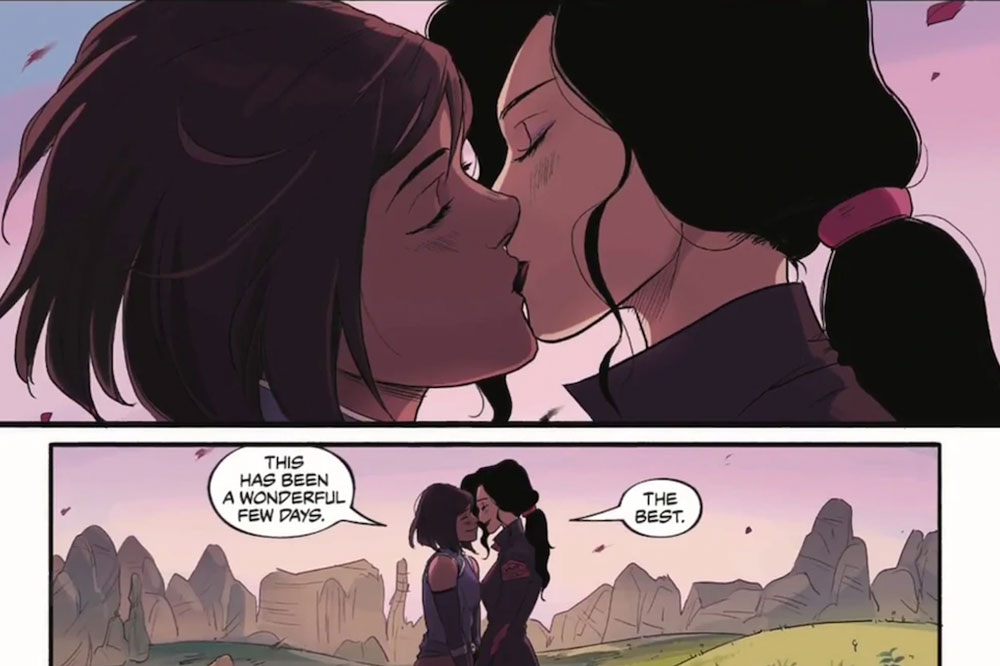 But good news if you’re a hardcore Korrasami shipper: the pair has since been announced as canon in the official comic, The Legend of Korra: Turf Wars. The comic showcased them on a vacation and sharing a sweet kiss — a win for the girls and gays. Gravity Falls ended their series in 2016, but not without confirming the relationship between Sheriff Blubs and Deputy Durland — an interracial gay couple.

In an episode where the police officers were threatening anyone who asks too many questions with tazers, they chorused “if you break the rules, we’re going to zap you. Zap, zap, we’re mad with power and love!” Finishing their lines, the pair turned and held each other’s faces fondly. 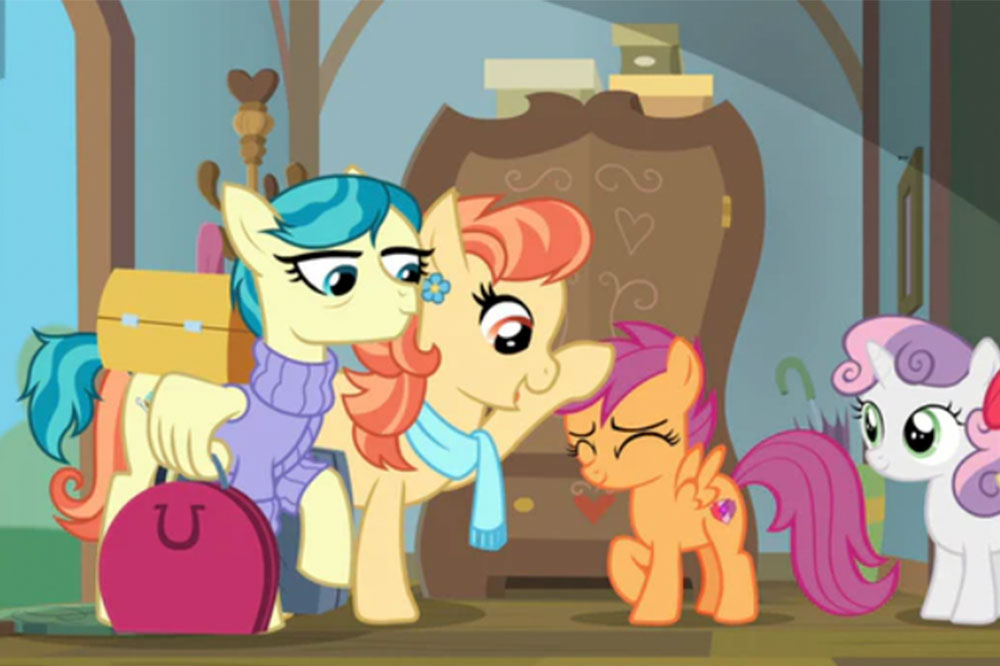 Fans of My Little Pony are familiar with Apple Bloom and Sweet Belle’s families, yet Scootaloo’s family was kept a mystery throughout eight whole seasons. We do know that her parents are always away though, so who exactly is raising Scootaloo in Ponyville?

In Season 9, the secret was out of the bag — we were introduced to Scootaloo’s lesbian aunts Aunt Holiday and Auntie Lofty. Showering Scootaloo with lots of love while her friends were over, Apple Bloom commented, “it’s really cool that your aunts watch you while your parents are gone!” 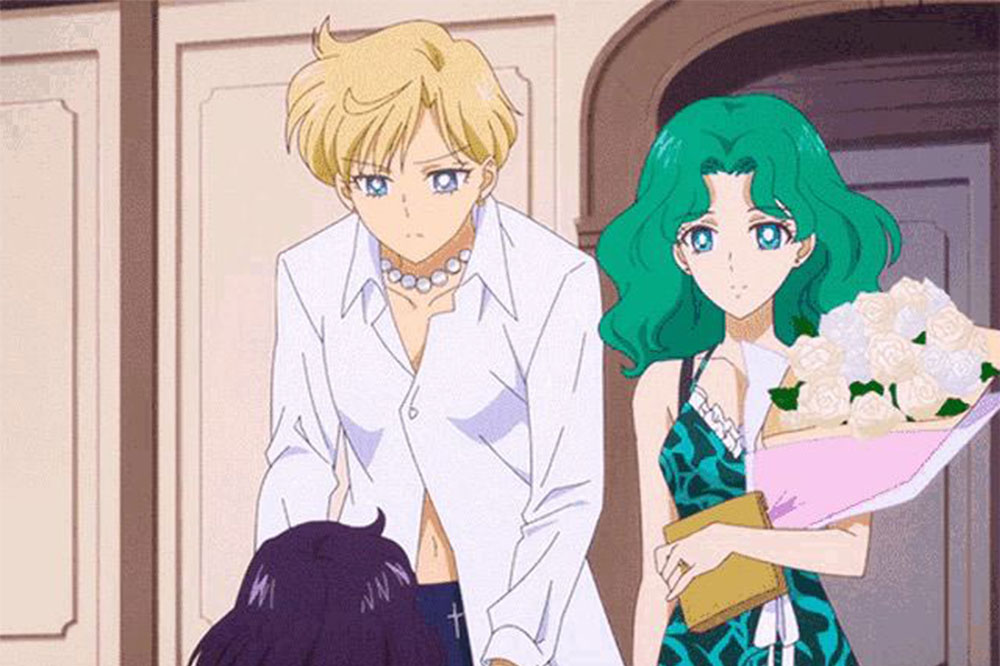 There’s a lot of controversy around Sailor Uranus and Sailor Neptune, since censorship made them cousins. Thankfully, the incest allegations aren’t true — they were proven to be a couple in Pretty Guardian Sailor Moon Eternal: The Movie Part 2.

When not wearing her Sailor Guardian uniform, Sailor Uranus is often dressed up in masculine fits like dress shirts and pants. Her appearance and relationship with Sailor Neptune also often got her mistaken as Sailor Neptune’s “boyfriend”.

Your honour, they are in love… not cousins, that’s for sure. 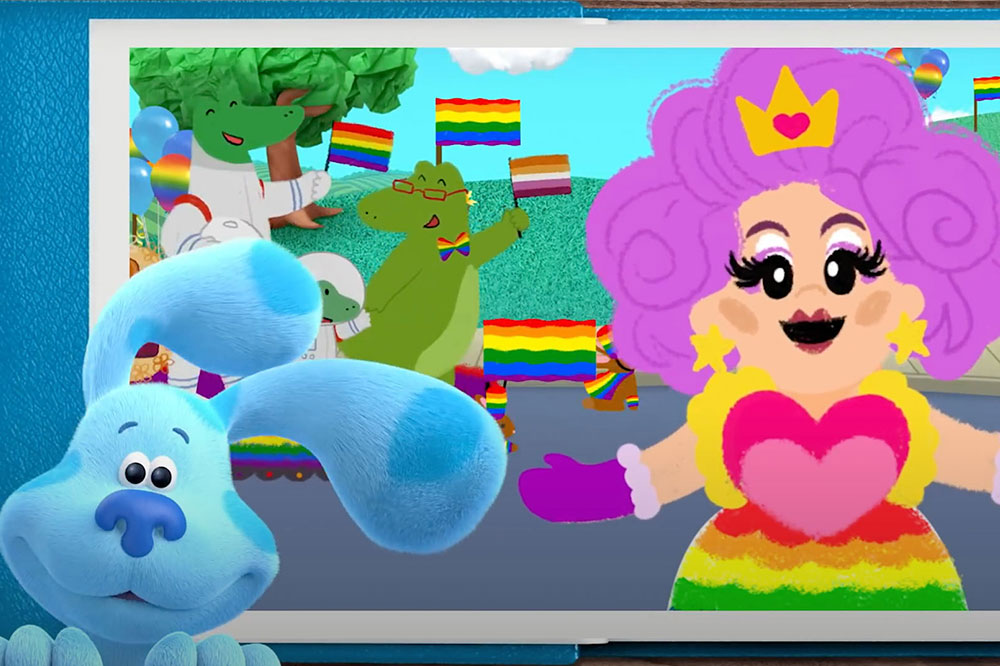 Admit it, we might have shed a tear or two when Steve left Blue’s Clues for good. He doesn’t have to worry though — Blue is still growing and learning well with kids till today. In 2021, Blue’s Clues released a Pride Parade sing-along, featuring a drag queen who was voiced by an actual drag queen, Nina West.

The sing-along introduced different types of families beyond the nuclear family, including a disabled non-binary couple and the different LGBTQ flags. Nina sings that all families are different and still love each other proudly, in turn making us proud of the show’s growth too. 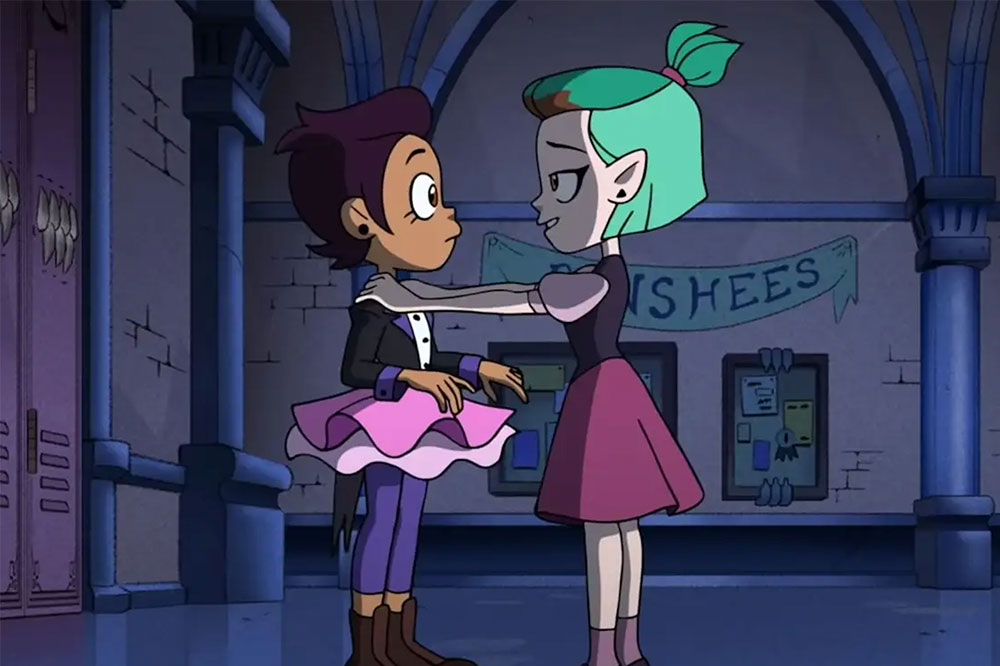 Bisexual misconceptions are real — such as being accused as indecisive for being romantically attracted to more than one gender. The Owl House is a relatively new cartoon launched in 2020, but it’s the first Disney cartoon to feature a bisexual protagonist, Luz, and her struggles.

For most of the cartoons on this list, the inclusive characters tend to be side characters. However, Luz and her girlfriend Amity are the first same-sex lead characters in Disney to share a kiss on-screen. 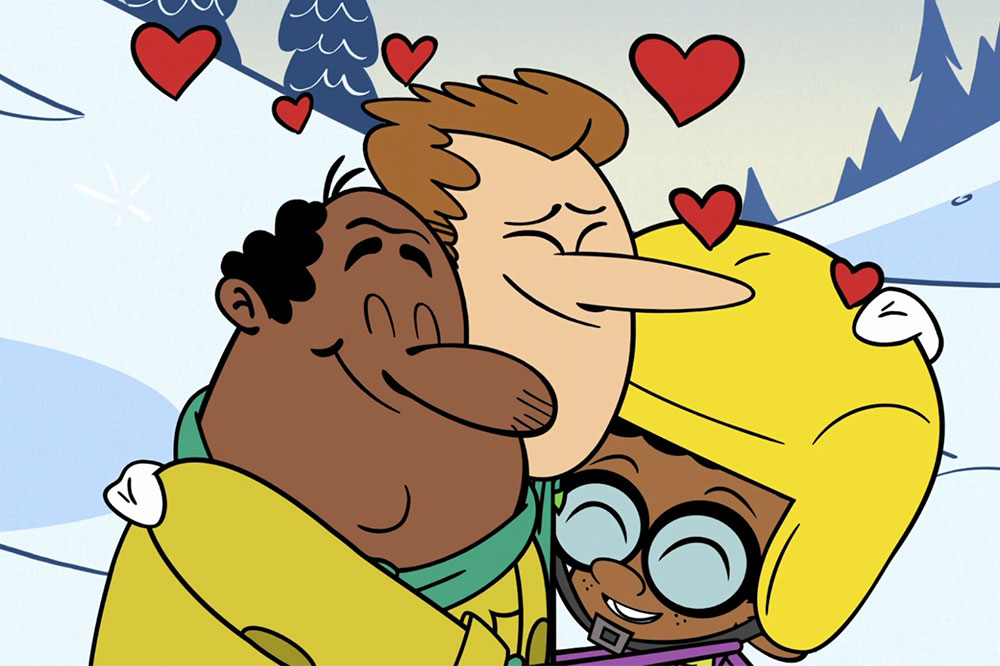 In 2021, The Loud House introduced Lincoln’s best friend, Clyde, who has two interracial fathers who aren’t afraid to express their love for their son.

Following the audience’s positive reaction to Clyde’s parents, the show is looking into expanding their storyline to include more LGBTQ representation, such as Luna Loud coming out as bisexual. With immense support from audiences today, we’re hoping that this will translate into other cartoons doing the same too.

Some of these cartoons might come off as a surprise to us since we overlooked the subtle LGBTQ representation as kids, but there is an undeniable rise in queer and inclusive characters in newer cartoons today.

As society grows more open to discuss topics on gender, sexuality and race, these cartoons serve as amazing guides to teach kids the importance of being themselves.