Two years after picking up her first pair of gloves, 30-year-old Nurshahidah ‘The Sniper’ Roslie had her first amateur fight she “didn’t mind not getting paid” for.

“I did it out of passion. I just wanted to box,” she shares.

But today, Nurshahidah fights professionally as Singapore’s first female boxing champion with a 7-1 win-loss record. She also represented the country at the SEA Games from 2009 to 2015. Getting mentally prepared for her fight during SFC 2017.

However, the road to success wasn’t easy due to the general scepticism toward athletics as a career. Shahidah cites the lack of support for the local sporting scene and an unreliable financial payout as the main hurdles a full-time boxer has to overcome.

“I think most people are surprised when a former scholar and lecturer chooses to do boxing after obtaining a degree. They usually think I box because I’ve had a rough childhood and poor education,” she adds. 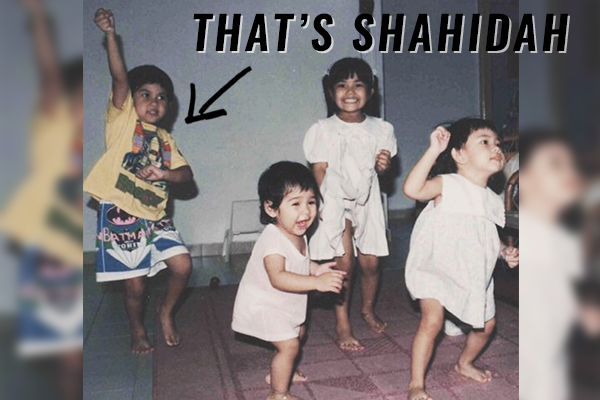 Pictured in her Batman attire. Shahidah was always an energetic child.

Unsurprisingly, her parents protested when she expressed her interest in becoming a full-time boxer. Not only were they concerned about her safety and physical well-being, but also her future and ability to provide for herself.

“Since the beginning, my mum told me to put my career first over boxing. She thought that if I had a proper 9-to-5 job and a 13-month bonus, I wouldn’t have a reason to box. So I respected her wishes and became a lecturer.”

But after three years of teaching at ITE’s School of Business (Fitness Training), Shahidah chose to further her studies in Australia and eventually got “sucked back into the sport”.

“Initially, I boxed to relieve stress, but I spent so much time training that I became good enough to qualify for the SEA Games,” she laughs. “That’s when I decided to pursue boxing once and for all.”

Fighting stereotypes in a male-dominated scene

Furthermore, being a female boxer in the male-dominated sport presents its own set of challenges.

On top of having a reputation as a violent, dangerous sport, boxing is also perceived as unfeminine.

“But really, I only box in the ring. Outside of the ring, I’m pretty much gentle and demure. I don’t whack people whenever I feel like it because I know I have a skill that can seriously injure someone.” Packing a punch in her iconic neon pink gloves.

The double-standard female boxers experience extends to how they’re judged for their abilities. Some feel female athletes aren’t as ‘exciting’ to watch or ‘up to standard’ as compared to their male counterparts.

“People don’t recognise the efforts of female boxers so we have to work harder than male boxers to gain the same recognition. I feel there’s a need to show that women boxers really have what it takes,” she adds.

However, Shahidah is quick to point out most of the discrimination and backlash come from people who aren’t part of the boxing community.

“Male boxers have a lot of respect for female boxers. It’s people who are unfamiliar with boxing who judge because they don’t understand.”

“I’m not treated differently by my teammates when we train. They don’t go easy on me just because I’m a girl. Sometimes, my coach has to step in and tell them to take it down a notch.” 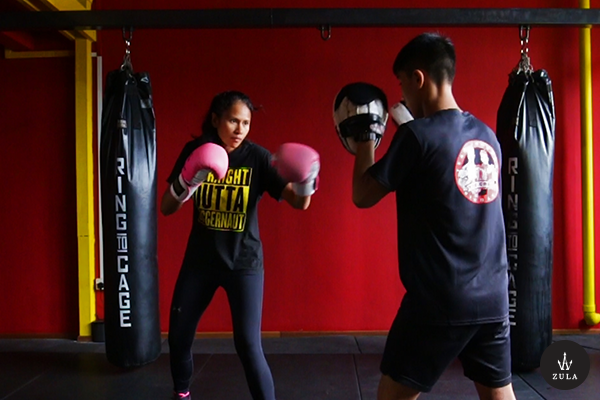 During a training session at Juggernaut Fight Club, where she also teaches boxing.

So what does the future hold for Singapore’s first professional female boxer?

“I’ll try to get more overseas titles,” she says. “I wanna be fighting at Madison square garden, the mecca of boxing. I want to see myself going that route.” 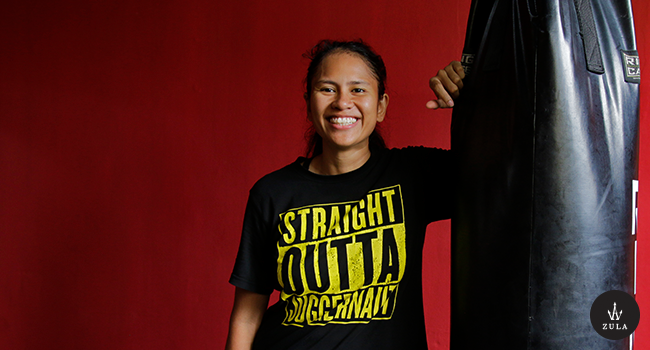 Despite her big dreams, Shahidah also recognises age is catching up. Boxing is a physically taxing sport and most boxers retire at the age of 35.

Not knowing how much time she has left as a professional fighter has led her to open her own boxing studio where she trains and teaches others how to box.

“I like to teach and I want to give back to the boxing community. With this studio, I can use it as a platform to make boxing more available and accessible to Singaporean women.”

Till then, Shahidah will be gearing towards her international sporting dream, one belt at a time.