Singaporeans can’t get enough of all things nostalgic, and the iconic Good Morning Towel is one of the items from our past that has inspired the most spin-offs. It’s appeared as mugs, onesies and reusable face masks.

The latest brand to pay homage to the towel, however, hails not from Singapore but Japan. Menswear brand Doublet’s fall/winter 2020 show included a luxe take on the humble Good Morning Towel, as a knit scarf. Oh, and it happens to cost $530, NBD. 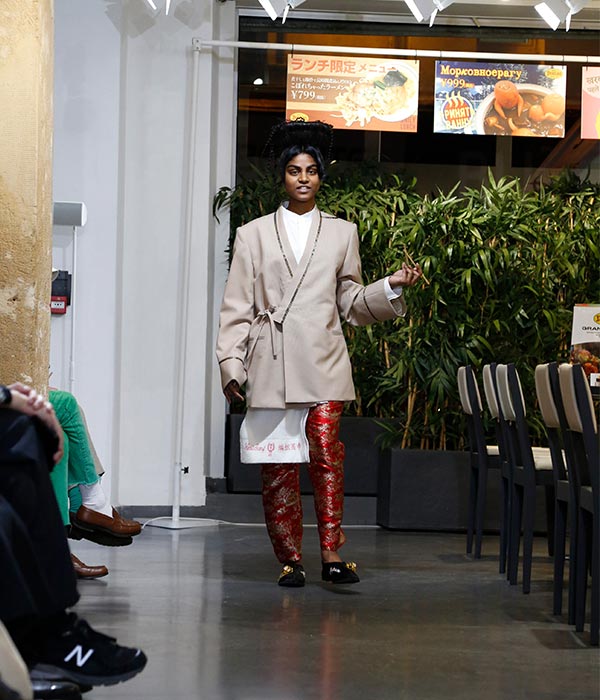 The Good Morning towel scarf was part of the opening look at Doublet’s fall/winter 2020 show during Paris Fashion Week. The theme of the show was “We Are the World”. It was staged in a Japanese-style cafeteria. That explains the electronic menu in the background, which appears to be in Japanese and Russian. It could also explain why the model is randomly holding a pair of chopsticks in her hand.

Back to the Good Morning towel. If you weren’t familiar with the towel, you might have missed it peeking out of the model’s jacket, and focused on the glitzy pants or oversize outerwear instead. 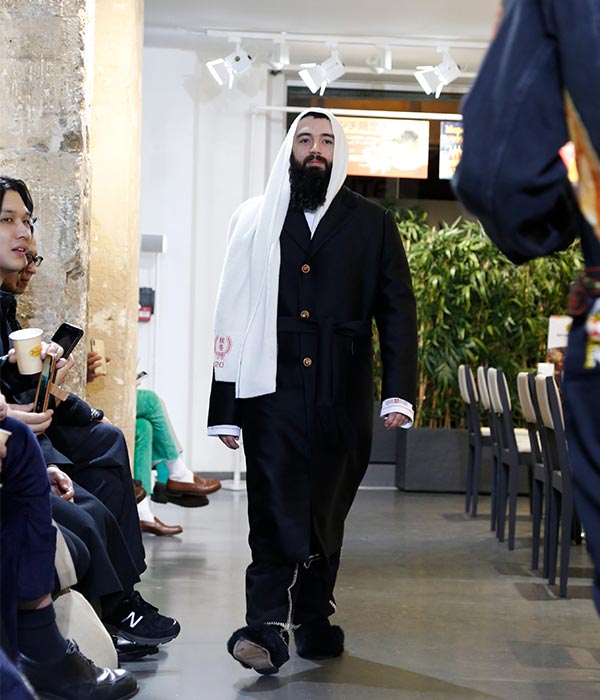 The second time it appeared on the runway, there was no missing it. Look 4 saw the Good Morning towel scarf draped across the model’s head, possibly as an homage to the OG users of the towels. That would be the rickshaw pullers, labourers and other hardworking forefathers of Singapore, who used it as a convenient way to wipe off their sweat as they worked under the sun.

Or, it could have been a last-minute styling decision, we can’t say for sure.

From the runway, however, it’s hard to see the little quirks that Doublet’s designer, Masayuki Ino, incorporated into the scarf. 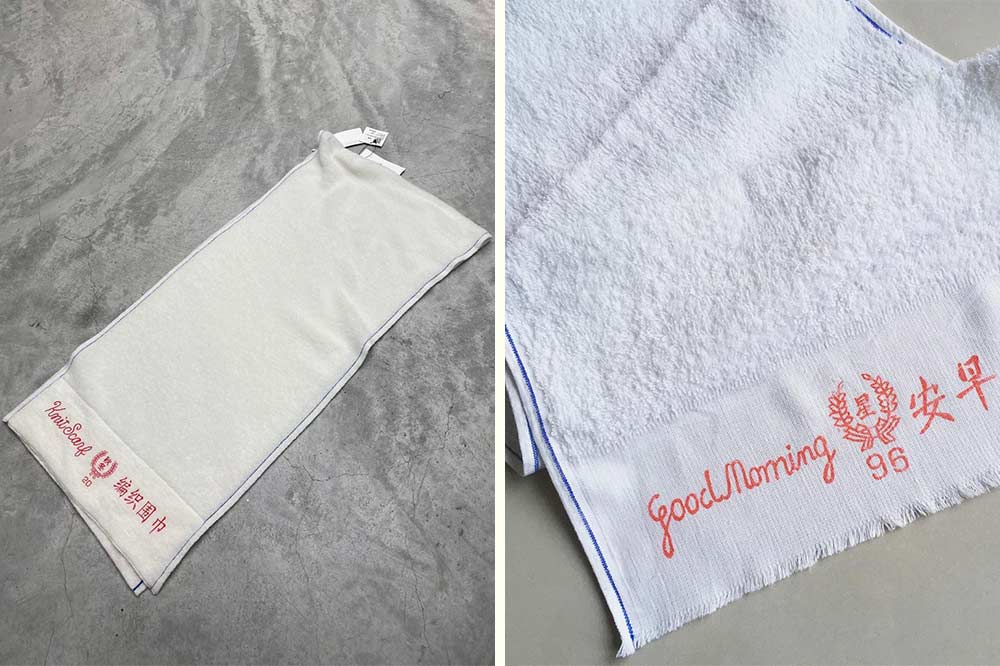 Besides the different textures (cotton vs  a blend of wool, acrylic and nylon), the rest of the differences are more a tongue-in-cheek nod to the original towel. Instead of the words “Good Morning” in English and Chinese, Doublet’s scarf reads “Knit Scarf”. The word in the middle of the crest has been replaced by “fall winter”, and the number below it by the number 20, cheekily pointing out that this scarf is from the brand’s fall/winter 2020 collection.

The scarf recently went viral after it appeared on SGAG, complete with a $530 price tag. Naturally, commenters had a field day. Because we all know the actual Good Morning Towel itself costs about one-thousandth of that.

So… who would pay $530 for the bougie version of the ubiquitous towel, you ask? We can’t say for sure, but we’re gonna make some suggestions.

A coffeeshop towkay who wants to be reminded of how he worked hard for his money every time he’s on holiday. A hairstylist who’s into all things Japanese, and is looking for a pop of colour amidst an all-black wardrobe. Someone who’s been on the lookout for a cashmere scarf, but hasn’t been able to find anything that lets her rep Singapore at the same time.

So how did a Japanese designer decide to pay homage to something from Singapore? Well, it turns out that we have Dover Street Market Singapore (DSMS) to thank. According to a spokesperson from DSMS, Masayuki Ino was in Singapore for Doublet’s installation at the Dempsey Road boutique in 2019.

While he was here, they brought him to Mustafa for “a little field trip”. Apparently, he loved the mall so much that some of the items he spotted there ended up serving as inspiration for Doublet’s “We Are the World”-themed fall/winter 2020 show. 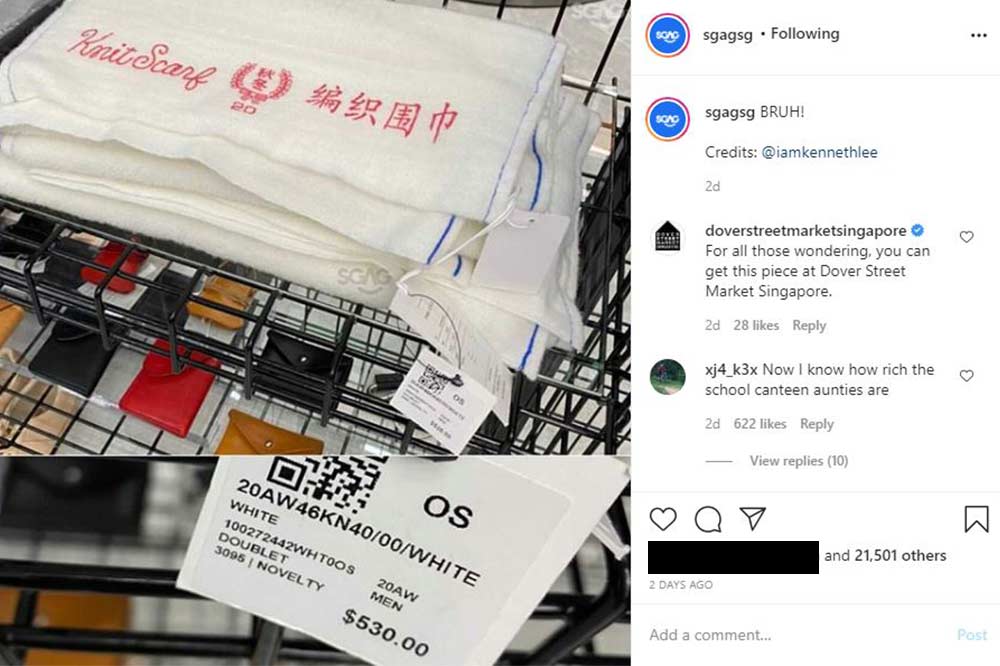 Doublet’s Good Morning Towel Scarf is now available at Dover Street Market Singapore. There are 2 sizes available: one is retailing for $530 and the other for $660. Those of you who are looking to channel your inner kopi uncle, you know where to go this weekend. While you’re there, you can check out if Walter van Bierendonck’s spike sneakers have made their way to the store too.

These Atas Spike Sneakers Cost Over $1,000 For Those Who Really Need Their Personal Space On The MRT