Jewel Changi Airport Made Me Proud To Be Singaporean

This is going to sound like a first world problem but I hate media previews although it’s part of my job. Chain me to my desk any day and let me hide behind the anonymity that is the Internet.

But I went to the preview of Jewel Changi Airport on the first day anyway, since my colleagues were heading there and because #FOMO.

Now I’m just f*cking proud of my country and I don’t care how lame that sounds.

From sceptic to convert 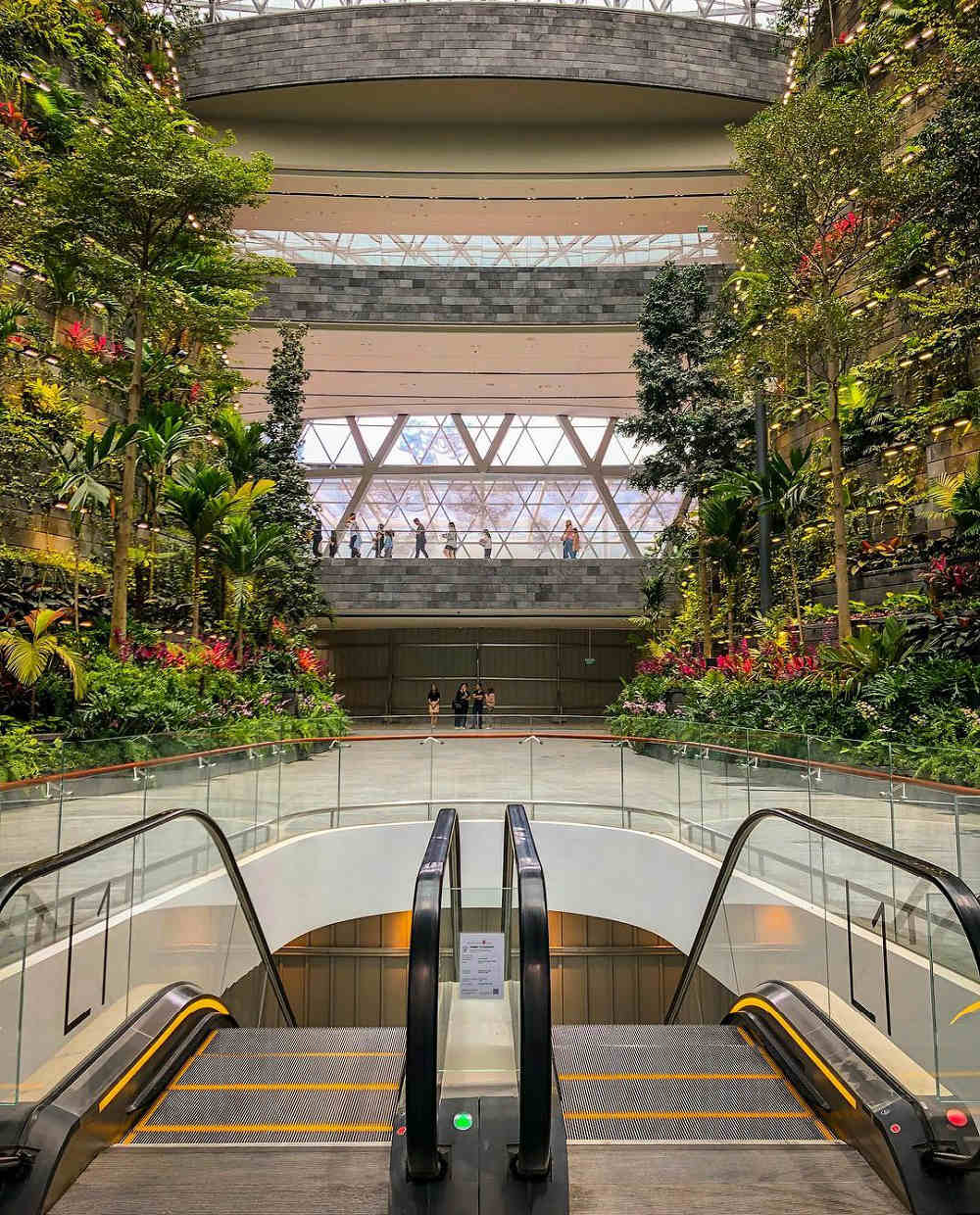 The first thing to assault our senses was the cloying but sweet scent of nature. Yes, you will smell the waterfall the minute you come within walking distance of the entrance. A kind uncle in uniform ushered us past the rope, acknowledging that we were late for the media preview but letting us through anyway with a wink and a smile.

Thus began my journey from being 100% a sceptic to reciting the words of our pledge fervently at every turn. Jokes aside, none of us were prepared for the spectacle that came next.

A staggering indoor waterfall greeted us at the entrance.

You could almost taste the anticipation in the air as we weaved through the hoards of people milling about the entrance, gasping periodically at the magnificent centrepiece. 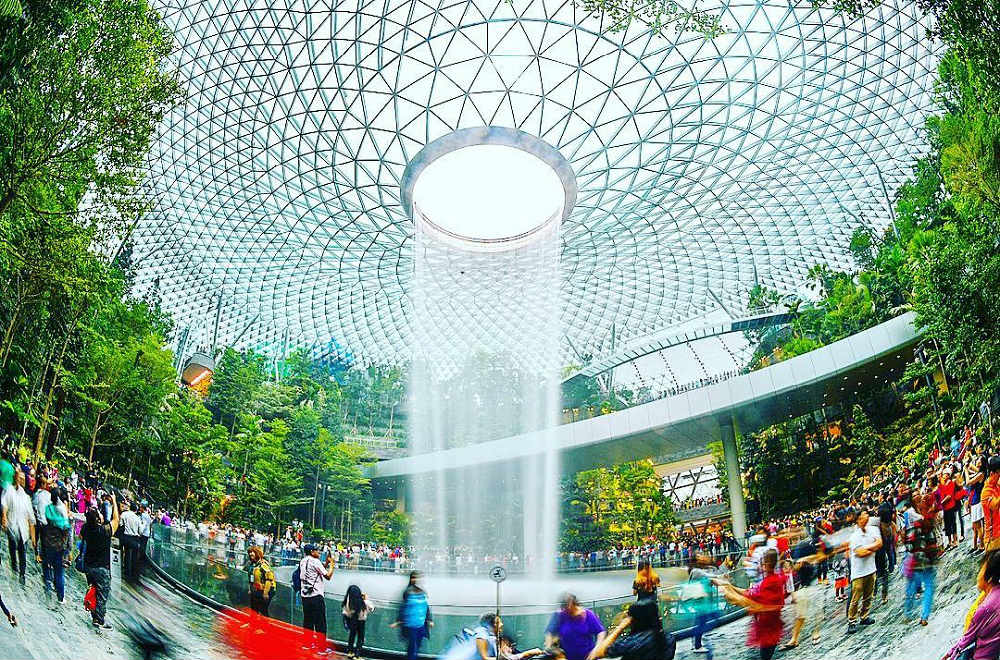 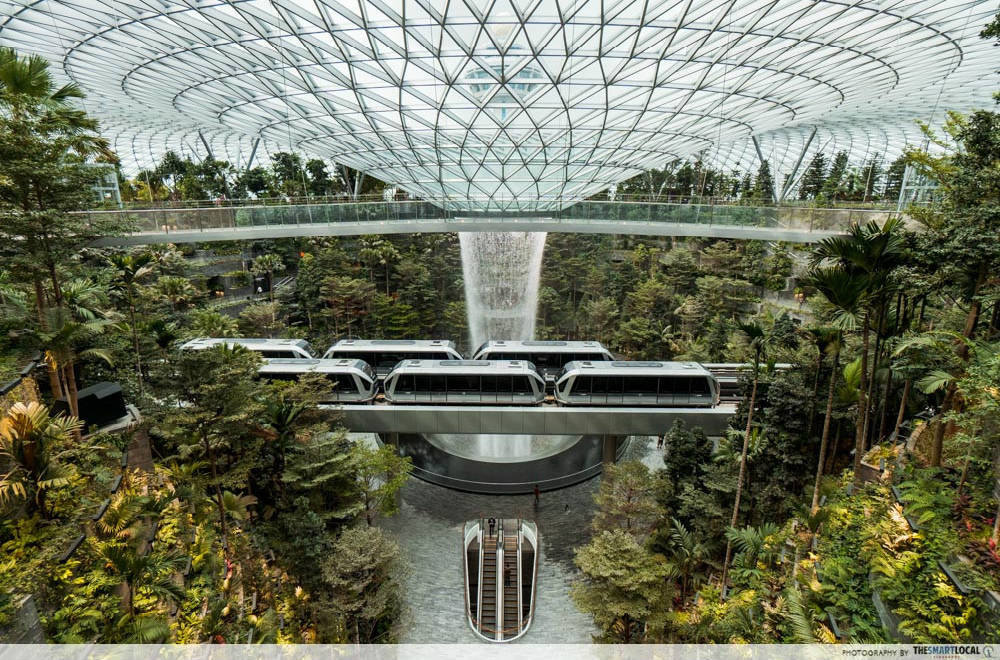 Then work kicked in.

This was the money shot that every tourist (and, of course, Singaporean) in the world would be dying to Boomerang on Instagram once word got out. We got busy snapping away on our phones, trying but failing to document the majesty of it all.

Not gonna lie, it was crowded as heck and people kept walking into your frame as you tried to take a decent photograph.

But even as we zoomed into every shot we took, we saw a smiling face on every unintentional calefare in our pictures. We met with sincere staff who greeted us and directed us patiently to where we were headed, before hustling to entertain everyone else’s queries. Also because it was a literal maze and I have the directional capacity of a teaspoon. They didn’t spew polished English or fake atas accents. The atmosphere was peppered with pure heartland chatter everywhere we wandered.

Journey from the West

Disclaimer: I live in the far-flung North-West territories of Singapore. One of the reasons I was hesitant to head to Jewel was because it meant having to endure a 2.5 hour train ride back to my kampung.

At one point, I struck up a conversation with fellow Westies who had made the pilgrimage to Jewel just to decipher whether the hype for Shake Shack was real. 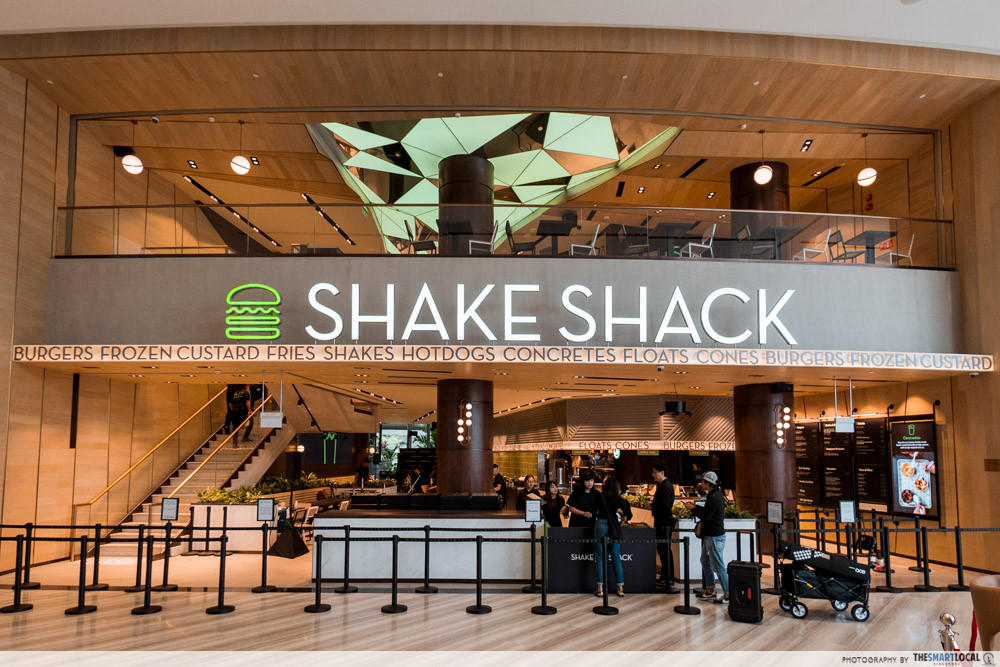 Though it was only open for selected media, like me, they had journeyed there just to see it with their own eyes — something I know lots of Singaporeans are going to do, no matter which part of the island they’re from.

History in the making

I remember coming across an elderly couple, hands intertwined tightly behind their backs, watching the waterfall in silence. 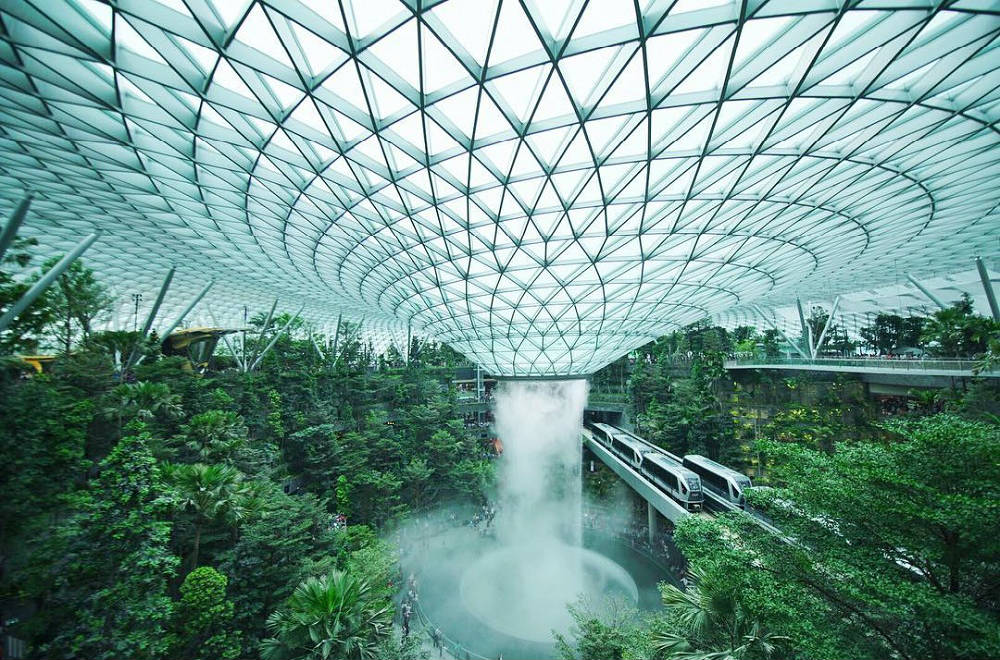 A sinking realisation set in quickly. In a matter of years, many of them would be mere memories in the hearts of their loved ones, and mine. There I was, standing there like an unwitting voyeur, watching as history unfolded around me.

An old man wheeled himself to the front of the waterfall and closed his eyes, enjoying the cool mist on his face. Passers-by were strangely patient as they awaited their turn to bask in the moment. 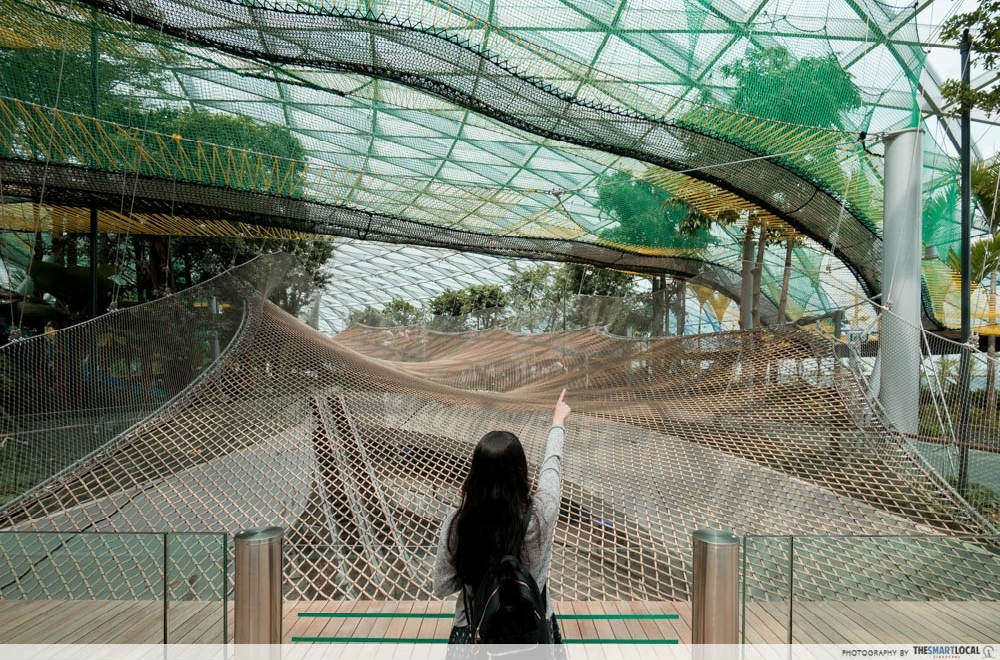 A young girl screaming in ecstasy behind us soon broke the spell. She dashed, hand in hand with her sister, towards the netted suspended playground. To our amusement, they sighed in utter dismay upon realising it wasn’t open yet.

Who am I kidding, that child was my spirit animal.

At the end of the day, I paused for a moment to stare at my own worn-out shoes from the ground we had covered that evening. This didn’t feel like your run-of-the-mill media preview; this was something else altogether. 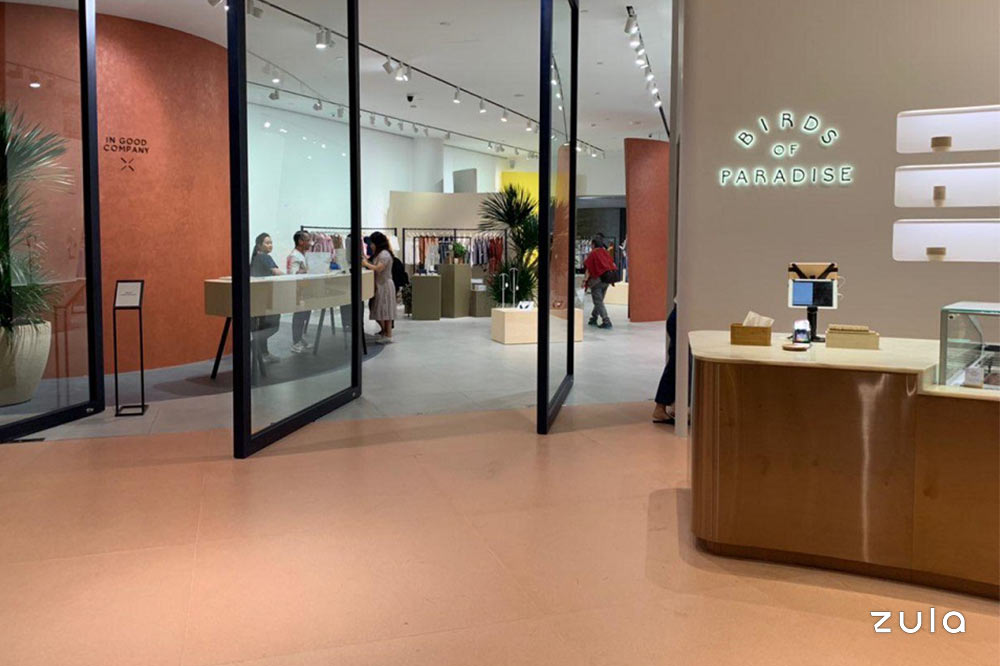 I felt immense respect. Respect for In Good Company’s co-founder sharing how the homegrown fashion label has grown over 7 years, and are now doing us proud in many other nations.

For my colleagues who tried to perfect every shot as people constantly sauntered into their frames.

For the auntie who reached out to clear our empty cups and wipe down every table once the tasting was over.

I wondered with every fibre of my being how we did all of this in just 54 years.

In case you think I am prone to sentimental drivel, this was only the second time in my life that I felt genuinely proud to be a citizen of my nation.

Call Singapore what you will, but this is a game changer for a tiny city that everyone else around the world thought was a part of China just a year ago. Trump and Kim may have graced our shores for a few days. But it’s a real pity they came a year too early.

This, my friends, is nothing short of a triumph. This is Singapore’s moment and all the folks at Jewel Changi Airport have every right to be proud of being a part of it.

As we struggle to find our way as a young nation or navigate turbulent regional waters, I know that even if our legacy only lasts 100 years, they will be talking about us for many more. Our highs, our lows, our achievements and our failings. Not to mention, our indoor waterfall, which was once the largest in the world.

Oh, they will talk about how we came close to achieving happiness, prosperity and progress for our tiny island and her people.

Like all gems, we’re a little rough around the edges. But it’s hard to love something that’s entirely perfect.

So at least for today, I’m f*cking proud to be Singaporean.

Joelynn believes that two puns are better than none.