While times are changing, public breastfeeding in Singapore remains a contentious topic.

Some Singaporeans are quick to whip out their phones and ‘Stomp’ nursing mothers, labelling the act as ‘indecent’. However, others feel we should be more accepting toward the natural process of motherhood. After all, a woman’s breasts aren’t simply ‘sexual objects’.

Leading by example, these 9 Singaporean mums who support the Bare It For Baby movement, have come forward to proudly share their public breastfeeding stories. 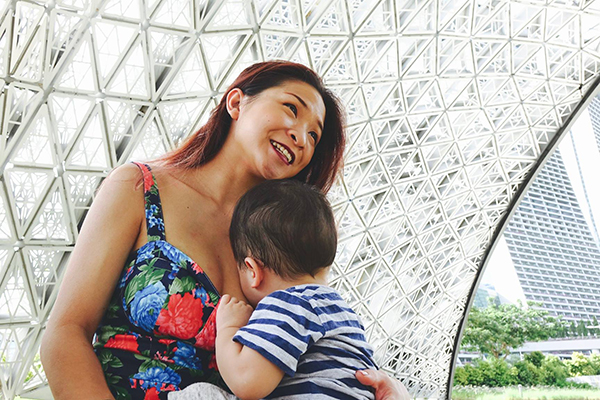 Mother of 2, has a personal blog chronicling her motherhood journey

As a mum, I prioritise my child’s feeding needs over being judged. Rather than constantly rushing to a nursing room when I’m out with my child, I choose to publicly breastfeed for convenience.

Every mother goes through different breastfeeding journeys, and I’m lucky I’ve never been in a situation where I was made to feel embarrassed.

My child is fine with being fed in a carrier, but some kids don’t like feeling restricted so their mums have to be more exposed.

I hope the public will be more tolerant of public breastfeeding. It shouldn’t be this difficult for something so innate and natural! 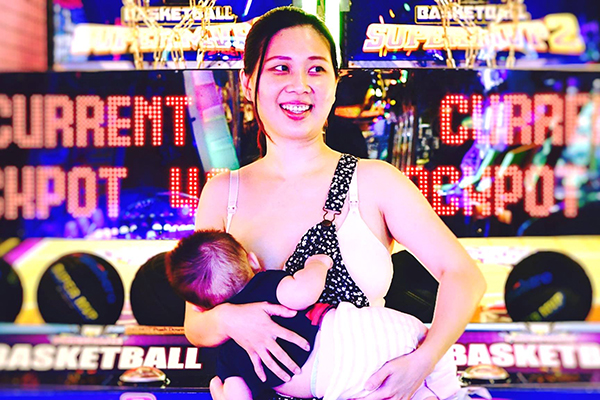 Mother of 2, Stay-home mum who was formerly a nurse

A mother must be brave and courageous enough to breastfeed publicly as it’s not accepted by all Singaporeans.

Once, when I was breastfeeding, I noticed a man who repeatedly walked past me. He was trying to have a peep at me! As I was feeding my child, I couldn’t do much except stare at him defiantly and hope he’d go away.

But breastfeeding is an act of love toward my baby and has nothing to do with it being an outrage of modesty. I’m not exposing myself, I’m just feeding my baby. 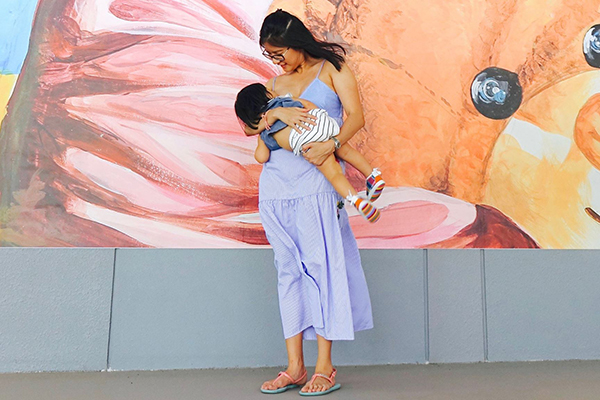 Breastfeeding has been a wonderful experience for a first-time mother like me. Besides being able to feed my hungry baby, it has helped create a special bond between us.

Though I’ve gotten a few stares when I’m breastfeeding in public, I’ve not encountered any incidents which made me uncomfortable.

I hope more mothers will be willing to nurse in public, no matter the obstacles. Though I’m comfortable breastfeeding in public, the stares some people give me can be quite daunting. They look at me as though I’m doing something shameful.

I know I’m putting myself up for judgement when I publicly breastfeed but like all mothers, I’m only doing what’s best for my child—if my child is hungry, I will feed her.

Breastfeeding is a part of motherhood which creates a special bond between mother and child. As it only lasts a few years, we should celebrate and treasure every breastfeeding opportunity

I hope the public can support breastfeeding mothers by not staring, and respecting our decision to publicly breastfeed. Hopefully, my daughter will not face such judgement when it’s her turn to become a mother. 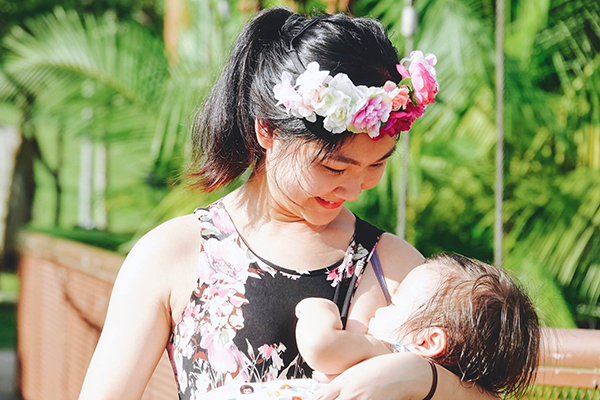 I often get stares for breastfeeding my children in public, but I’m not bothered because there’s no shame in what I’m doing. All mothers have one thing in common—wanting to fill our baby’s tummy.

The strong bond a mother shares with her child when breastfeeding is unlike any other, and mothers should be proud of that.

I hope more mothers will step up, be courageous and feed their babies in public. The public should not judge a nursing mother but respect her. 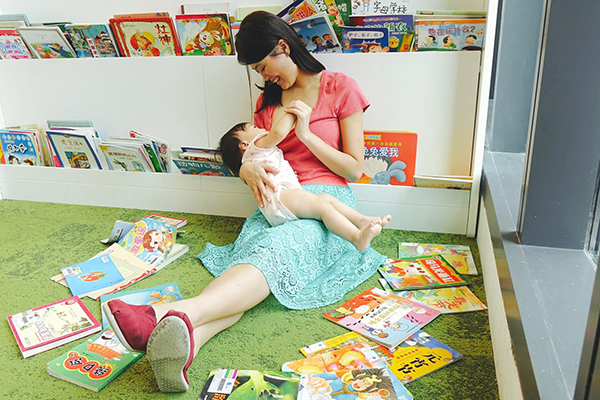 Last May, my family and I were holidaying in Japan with my then six-month-old baby. While we were on a train, she started crying from hunger. I was hesitant to nurse her as there were a few elderly Japanese ladies sitting in front of me.

One of them asked if my baby was hungry and I nodded my head. She then patted my shoulder to let me know it was alright to breastfeed, and I was just doing my job as a mother.

I was extremely touched and wondered how nice would it be if one day, Singaporean mothers would not have to worry about being judged for public breastfeeding.

I try to be discreet when nursing in public as I know not everyone is comfortable with it. But in the future, I hope more people will be accepting of it. 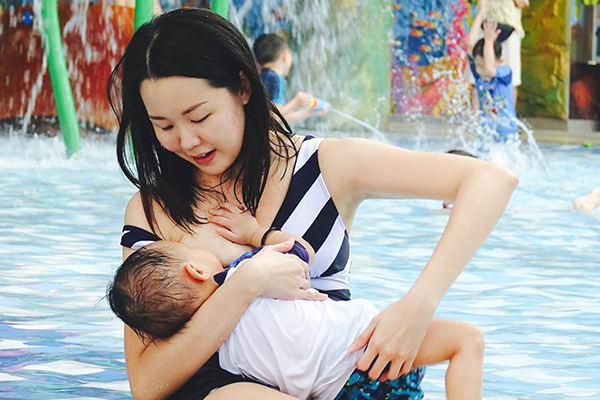 When we’re hungry, we’ll find food to eat. When my children are hungry, it’s only natural I feed them. But breastfeeding wasn’t always easy for me.

My first-born struggled to latch and pumping milk was extremely stressful. However, I told myself, “No matter what, I have to be strong and determined.”

This October marks the first year of my breastfeeding journey. To all mothers out there, don’t give up! When I started my breastfeeding journey in 2011, there wasn’t much support or information on breastfeeding. Nursing rooms were hard to find, and those that were available were in a horrendous condition. It was hard for my baby to feed beside a bin full of smelly soiled diapers!

Using nursing tops and covers were difficult as my baby didn’t like how hot and stuffy it was when she was covered. But without the cover, I felt like I was starring in an R21 movie.

Thankfully, more information is now available as more people have raised awareness on breastfeeding. I’m now more at ease and comfortable with breastfeeding publicly. At the end of the day, a healthy baby is the most important. 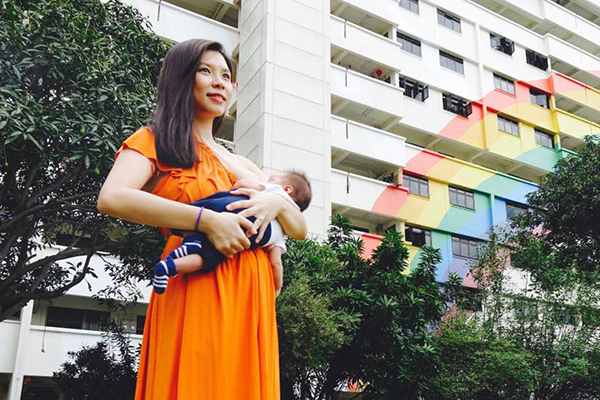 One time when I was at a hawker centre, my baby started crying inconsolably out of hunger. But when I decided to breastfeed him right there and then, a passerby criticised me.

I remember how ashamed I felt due to my inability to feel confident about both my baby and my body. I felt so embarrassed I had to ask my husband to shield both of us.

However, through sharing my story, I want mothers to know that there is a supportive breastfeeding community. With more awareness and support, I hope public breastfeeding will eventually be seen as a normal process of raising a child.

Being Supportive Of Breastfeeding

While we respect that public breastfeeding is not for everyone, we shouldn’t shame mothers who choose to put their babies’ needs before themselves.

Raising a child is tough enough, so to all breastfeeding mums out there, kudos to you!