Soh Pei Shi Is One Of Singapore’s Pioneer YouTubers

Describing herself as “attention-seeking” and having “middle child syndrome”, Pei Shi used videos as a way to express her views while battling loneliness and bullying in school.

Since she was 17, she has collaborated with the likes of Jianhao Tan to make YouTube videos. Today, she has a substantial 137K followers on her YouTube channel.

She is rather private on both her YouTube and Instagram as she does not like to be misrepresented for her opinions. Hence, she shies away from being too personal about others in the industry.

Unfortunately, being in the spotlight sometimes means that trouble looks for you instead.

You might not have heard of her before this incident, but a photo of Pei Shi smiling at the late Aloysius Pang’s wake made its rounds on the internet, with netizens criticising her for inappropriate behaviour.

She was actually working in Penang that week, but made special arrangements to fly back to Singapore in the morning and return to Penang late at night to attend the wake for a few hours.

She thought to herself, “If I don’t go, I’ll regret it because I need to send him off, he was a very nice friend.”

However going on the round-trip flights within a day “was really very tiring”.

“We [had] this pact between all of us that we  [wouldn’t] cry. We talked about happy things that used to happen with Aloy. Of course, there were happy memories that we talked about. We tried to keep everything lighthearted.”

She expresses that she should have been more cautious, “I know that there were a lot of cameras around and I just didn’t keep a poker face throughout.”

After flying back to Penang, she received a deluge of messages highlighting the incident. Tired and upset, she could only muster up enough energy to post 1 reply to address her haters.

“What upset me the most were the negative comments that said [my family didn’t bring me up right],” she explains in Mandarin.

But this won’t be the first time Pei Shi has had to deal with haters as she was frequently bullied during her time at Dunearn Secondary School.

Being bullied in school

Despite having a shy personality, Pei Shi enjoyed writing on her blog. She attributes the bullying to others perceiving how she was expressive on her blog but quiet in person. 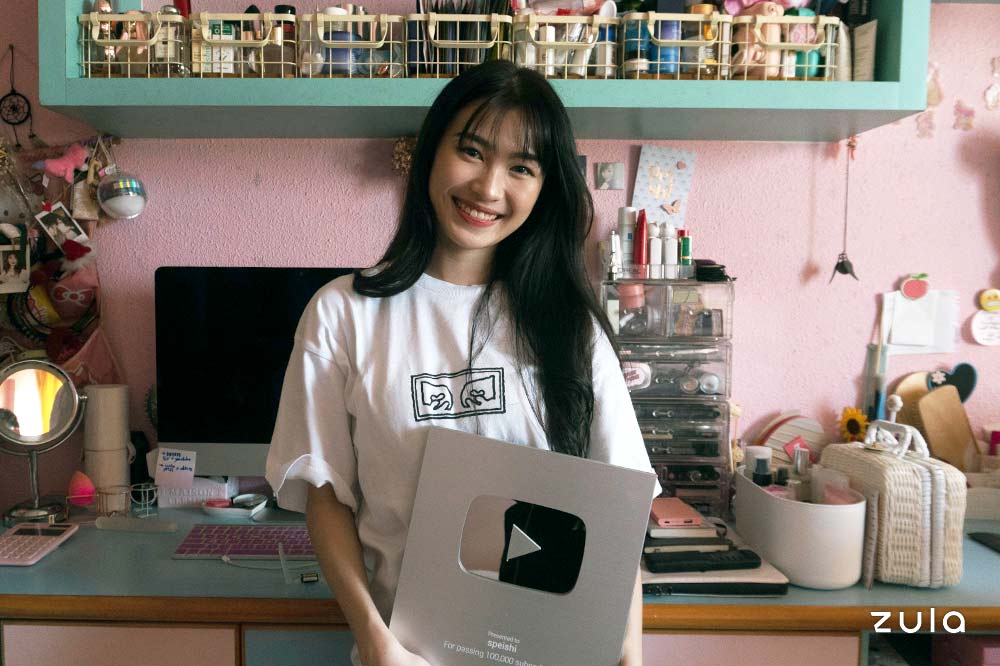 Guys would throw stapler bullets at her hair and girls would ostracise her.

Once, a boy in her class used the F-word on her. She was so shook that she texted her older brother, “This guy throw pen, ink kena my shirt and he scold me the F-word.”

“He got his ah beng friends and they came up to my class.” She describes that her brother and his friends tossed tables and board dusters in the classroom, making the bully cower in fear.

“From then, for 2 years, the guys would never bully me already. But the girls will still be a bit bitchy… they will write [nasty] notes and pass [them] to my desk.”

She recalls an incident when she blogged about how much she liked a certain Juicy Couture perfume. The girls in school reacted by saying, “Why are you copying this senior?”

A rich girl in her class then bought 3 bottles of the perfume and placed it on her own desk to spite Pei Shi.

“They want [a] reaction from me right? So I just act like I never hear lah,” Pei Shi explains how she generally dealt with her bullies.  “I [kept] telling myself that 10 years down the road, it will not be a problem at all.”

Sometimes she found herself thinking, “I need to join this gang and bully other people also.” However, she laughed it off, “I’m so small. Nobody will be intimidated by me lah.”

While forgiving her bullies is easy, she finds forgetting the bullying incidents to be much more difficult. “Even now, I still think about it.”

Pei Shi had a best friend in school; another shy, quiet girl she describes as “nerd nerd”. For a while, her friend disappeared from school for hospital treatments, but Pei Shi never found out what the illness was.

When her friend returned to school, Pei Shi found an opportune time to ask her friend, “Is everything okay?”

“Everything is okay now,” her friend replied. After hearing that, Pei Shi didn’t probe any further about the illness.

However, a few months after they graduated, she received a message that her best friend from school had passed away.

“I sat there. I was stunned and I started crying. My mum hugged me and both of us just cried, sobbing non-stop.”

She feels a tinge of regret as her friend had commented on one of her videos, “I wish that one day you can do my nails again.” But she did not reply to that comment because she thought that if she replied to that 1 comment, she would have to reply to all the comments.

“Because of her health, she cannot do all these things, so I need to live a good life.”

“I really don’t have much [of a] love life going on,” she explains when asked why there is a lack of lovey-dovey posts on her social media. “[Age] 20 was my first relationship ever,” she discloses. A celebrity had DMed her on Instagram and she thought he was quite cute. 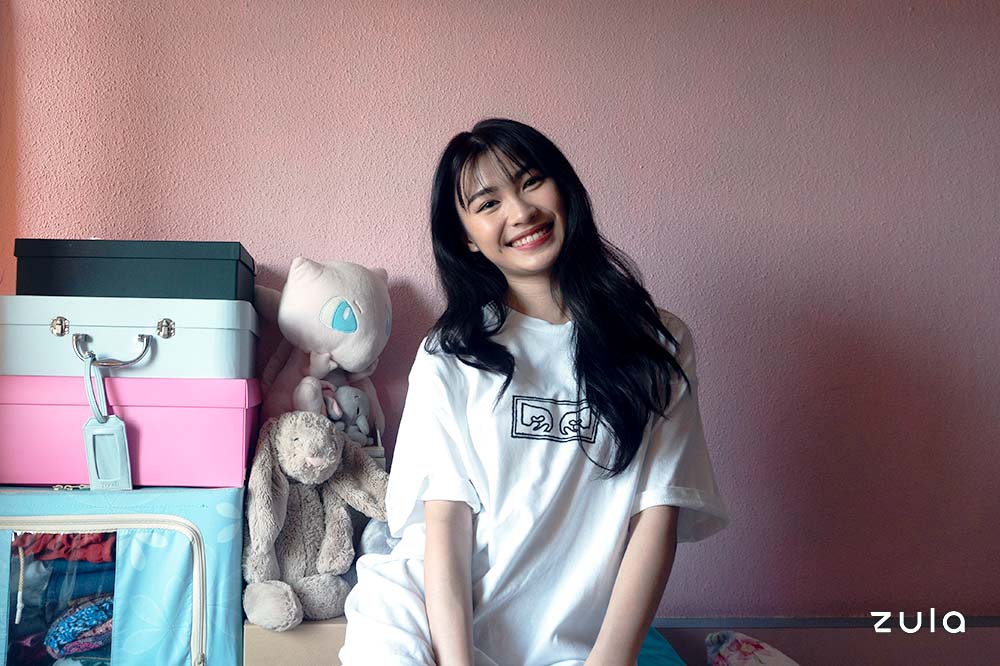 “[However,] he was in a position where he was not allowed to be in a relationship.”

“We hardly ever [held] hands when we [were] outside… keeping the underground thing real.”

They broke up under a year and she was devastated. Seeing how miserable she was, her father decided to bring her along to view puppies at Pasir Ris Farmway.

There, she met the love of her life, Bobbi, a Japanese spitz puppy with fuzzy white fur, that she affectionately calls her husband.

They broke up within a year as well and her sixth sense told her that he cheated on her. True enough, “2 days later, he was already out with another girl.”

“I took back all my stuff from him, straight away deleted every trace of him, including his number. In one month, I completely forgot about him, I don’t even remember his face.”

“Depend on yourself, not on men,” she says in Mandarin.

She is happily single now, and spends most of her time on her career and hanging out with her friends.

Being a YouTuber and influencer

Despite her sizeable following, you might be surprised to learn that Pei Shi does not employ others to help her with her work.

Once, she tried hiring an intern but discovered it was not beneficial. “I have to think about what work to pass to the intern. In the end, it’s more work, I might as well do everything myself.”

She was also once signed by an agency, Nuffnang. But eventually, she decided to call it quits as Nuffnang took a huge cut from her earnings and she also felt that she did most of the work herself anyway.

She admits that being an influencer has its fair share of perks. And more importantly, it pays well.

Pei Shi has come a long way at a tender age of 24. 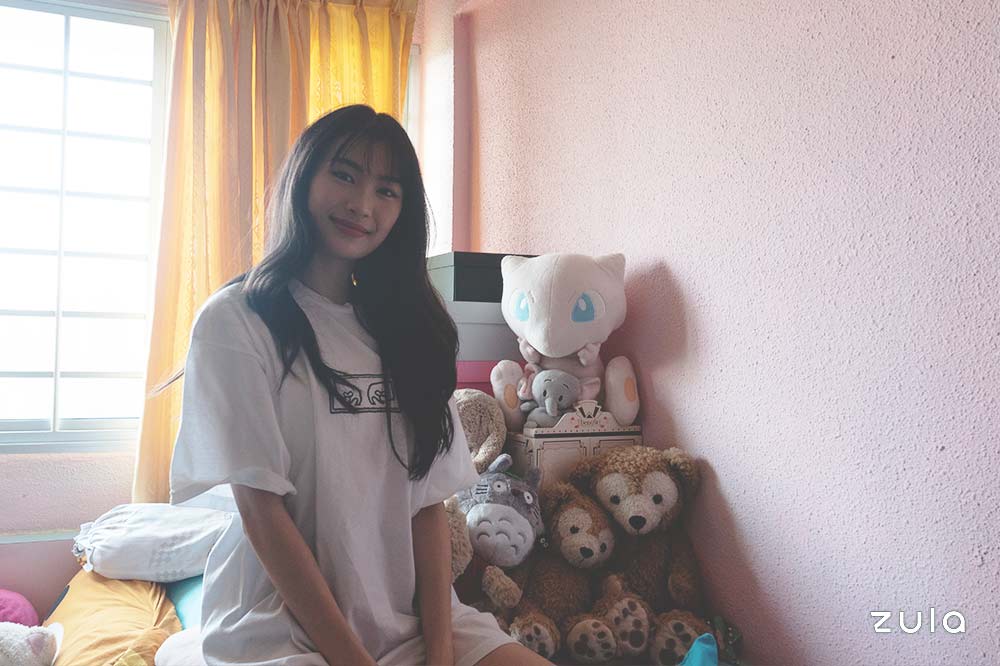 She has equally successful and famous friends who have been supportive of her. Noah Yap, Jianhao Tan, Rachell Tan, Benjamin Toh and Joshua Tan are all good friends in the social media scene who have lent their support through the years.

She is also thankful for a close family that dotes on her. Even her younger sister takes care of Pei Shi as if she was the older one.

In a way, she has fulfilled her dreams, “I [wanted] to act when I was very young, that’s why I joined drama club [in school].”

However, with the prevalence of social media, she is aware that, “Being a public figure, you need to consider a lot of things. Cannot do this, cannot do that. The moment you do something, people gonna do some exposé.”

Sometimes, she can’t help but compare herself with other influencers on Instagram who look like they have it all together. Despite people praising her for being skinny, she shares, “My insecurity is that I can never be curvy, I also want to be t-h-i-c-c-c-c-c.”

Even when she detoxes from social media to work on her mental well-being, it can only last for a maximum of 3 days as she usually has to upload a post for her clients.

Describing the nature of being a YouTuber, she shares, “There [are] more pros than cons. [I’ve stayed] here for how many years already, because of the money lah. I [also] like to share things online. The cons [are] that I have to deal with the drama, or people talking shit about you.”

However, she is not complaining and hopes to create better projects like films, for example. As for a role she hopes to play in a movie, she answers without batting an eyelid:

“I want to be a serial killer. The reason why I want to act is [that] I want to do something I cannot do in real life.”