Initially, I had the idea of writing the article ‘SG Guys, Please Stop Using Sex As A Conversation Topic On Dating Apps’.

When I joined Tinder in 2015, many guys used sex as a ‘casual’ conversation topic under the guise of ‘testing waters’, or to prove themselves ‘worldly’ and ‘open-minded’. However, they often came across as pretentious, douchey and extremely insecure.

Maybe they weren’t scoring with girls IRL and Tinder was their outlet. Maybe they thought it was cool to talk about sex and brag about their ‘conquests’.

Either way, it came across as a desperate effort to validate their manhood and desirability, and a pathetic attempt to slide into my DMs.

But when I decided to check out Tinder again in 2017, what I discovered shookt me: Men on Tinder have evolved. 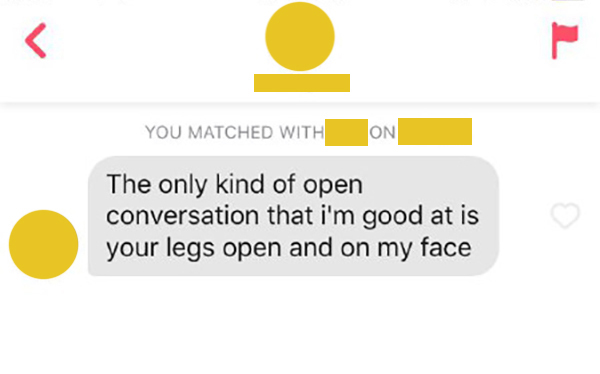 While I’m open to hooking up on Tinder, vulgar openers turn me off. Slightly repulsed, I’d ‘unmatch’ these people from my conversation list.

Still, I appreciated how the men who sent sexual one-liners had integrity. At least, they were honest and didn’t waste time by beating around the bush.

In contrast to these straight-up sleazeballs, men of Tinder circa 2015 would slip sexual innuendos or steer the conversation toward a more sexual tone after three or four messages. 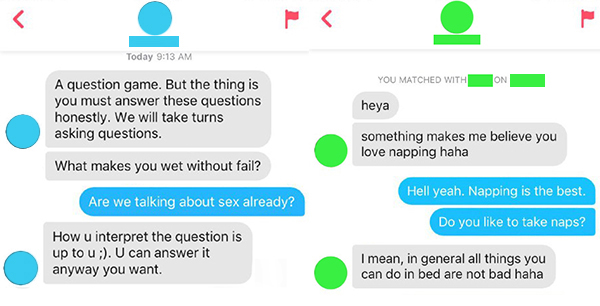 This wasn’t surprising. But in 2017, such ‘dodgy’ conversations were far and few between.

Two days into the research, I was ready to call it a day and write an article about how wonderful Singaporean men on Tinder have become.

I happily shared the results with my boyfriend, and he laughed, “Baby, you’re so wrong.”

He explained to me when Tinder first started, many guys were pretty sleazy, and tried to hook up with girls by being extremely direct.

However, most girls found being spoken to this way gross and complained to their friends. Accompanying these complaints were a slew of online articles telling men to stop.

“So now guys don’t go for the ‘direct kill’. They seem ‘normal’ when you first start messaging and get to know you for a bit, only after a while, they’d start being weird and ask you to send nudes,” he finished.

To put this theory to the test, I hung around on Tinder for another week, and oh my God, my boyfriend was right.

Manipulation as a dating tactic 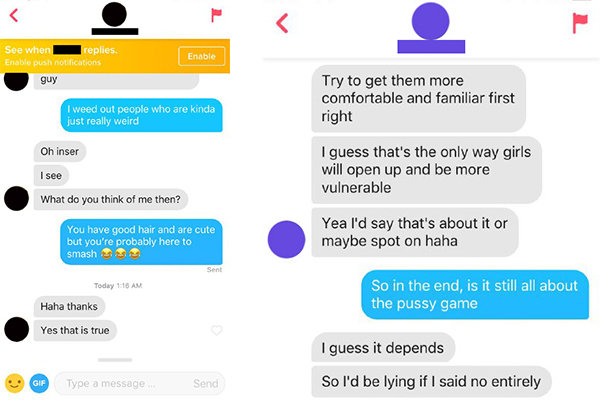 After texting guys for a couple of days, I’d ask them what they really want. Sometimes, they’d skip to the point and reveal to me their true intentions. Several guys even confirmed this Tinder theory with me.

Needless to say, Tinder is a dating app after all, and it’s fine if people want to use it for casual sex. However, I was bothered by the tactics used.

I get how talking to someone is a way to become familiar with each other, and to suss out what both parties want from the match, sex or otherwise.

But going out of the way to gain someone’s trust and have them open up to you before doing something ‘funny’ is actively manipulating and making use of someone, and it really isn’t cool.

It’s still seeing people as pieces of meat and going a roundabout way to treat them as such.

At the end of the day, it’s largely about the ‘V’. I don’t have a problem with guys wanting to get into a girl’s pants, and not all Singaporean guys on Tinder just want a quick romp.

However, with more guys adopting this subtler tactic, it’s becoming more difficult to distinguish the genuine from the manipulative.

Ultimately, I’m concerned how Tinder is becoming a more dangerous place for girls, and a breeding ground for men to become fake nice guys.