As kids, we’ve always heard our parents wishing for us to grow up happy and healthy. And when it comes to the latter, we don’t often consider the possibilities of terminal illnesses. That’s right, we’re referring to the scary “C-word”, aka cancer, that Singaporeans fearfully avoid talking about. However, without realising, we’ve also failed to learn about how these illnesses can be avoided in the first place.

How does it feel to be perfectly healthy your whole life, and then have your entire world come crashing down with a cancer diagnosis one day? We spoke to Amaliah, a 40-year-old cervical cancer survivor, who went through this exact scenario. Sharing with us about how she discovered she had cervical cancer and underwent a major surgery, her story emphasises the age-old saying “better to be safe than sorry”.

Why she decided to go for a checkup 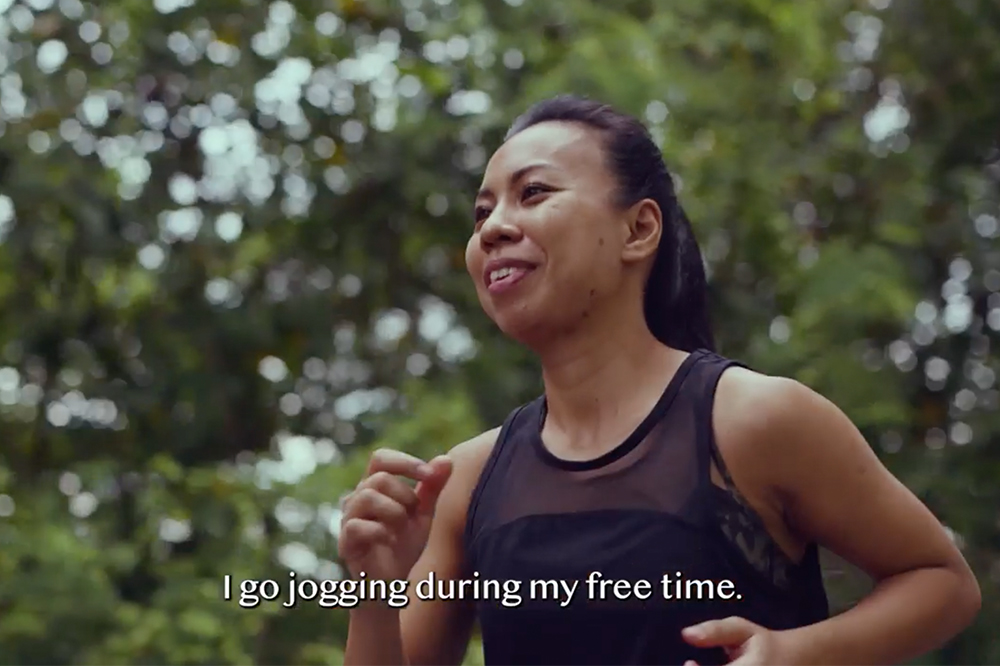 Throughout her whole life, Amaliah has always been active and healthy. She enjoys fun-filled hobbies like jogging, watching movies and spending time with her children. The thought of cancer ever crossing her mind? Close to zero.

“I did a pap smear for the first time and was surprised at how simple and painless it was. I used to be scared of going because I always heard of horror stories about pap smears being painful. Hearing these from the people around me made me put off the test for the longest time.”

Discovering she had cervical cancer

Going for her first pap smear was quick and fuss-free, but that wasn’t the end of Amaliah’s screenings. A week later, she received a call saying that her results were abnormal.

“At first, I didn’t understand what they meant by ‘abnormal’. I thought I just needed to eat medicine and see a doctor to get it treated, but then I was referred to a hospital.”

“I questioned, ‘Alamak, so serious, need to go to the hospital?’ and the doctor said yes, I needed to go fast. That’s when it struck me how grave this whole situation was.”

We can only imagine what it’s like to be in Amaliah’s shoes at that moment, to be healthy her whole life, then everything she thought she knew suddenly taking a 180-degree turn. During her next few hospital visits, Amaliah went through 2 biopsies and faced the shock of a tough diagnosis — Stage 1A2 cervical cancer.

She was expecting to hear her treatment options laid out for her to ponder, but the doctor only gave her 1 option: hysterectomy.

FYI, hysterectomy is the surgical removal of the entire uterus. This meant that Amaliah couldn’t have any more children after the surgery. Recalling the chilling experience, Amaliah shares, “I can still remember the day they told me this was my only option — I have goosebumps just thinking about it. I remember wondering if I could do any other treatments or delay the process, but the doctor was very firm about hysterectomy.”

Watching Amaliah struggle to explain how she felt then was truly a heartbreaking experience, even while we were miles away from each other, only connected through the screen of our video call. She occasionally paused to collect herself, emotionally opening up that it was “a very tough decision to make”.

“The doctor explained the procedure and said I was very lucky. I asked her, ‘what if I didn’t go for this pap smear?’ and she told me it would have been discovered too late. I wouldn’t be able to do hysterectomy because the cancer would have spread, leaving me with no choice but chemotherapy and radiotherapy.”

With a heavy heart, Amaliah decided to heed the doctor’s advice and go through with the surgery. 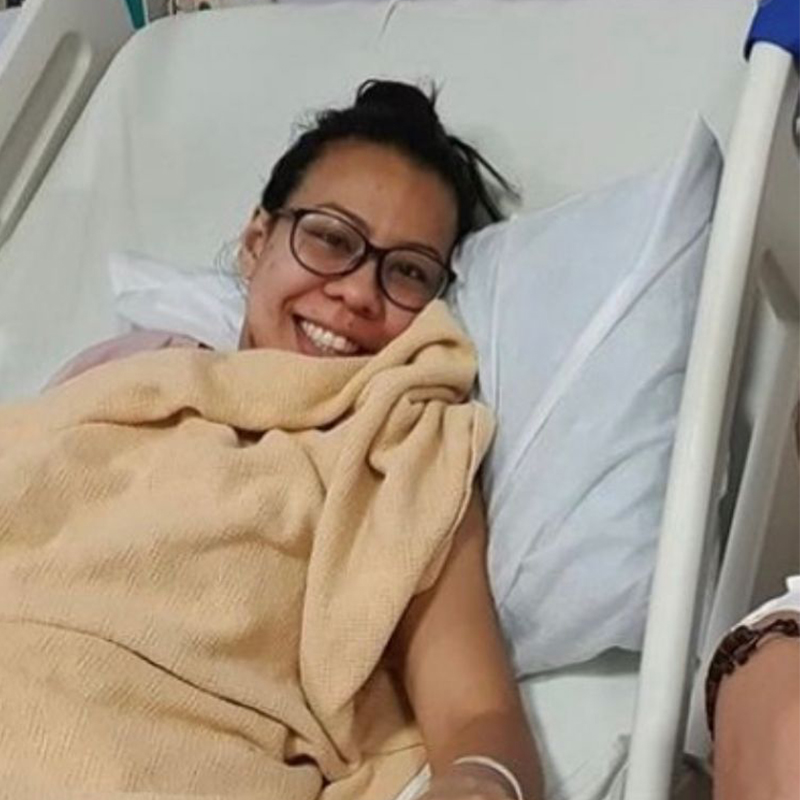 Not many Singaporeans are familiar with the process of hysterectomy — that includes Amaliah herself. On top of the emotional stress of not being able to have kids anymore, she described the procedure as “very painful” on her body physically.

“Even after the doctor explained everything, I was still very scared as I didn’t know what the recovery process would be like. Post surgery, I was on morphine the whole night because of how painful it was.”

If you’re looking for a pain scale to compare this to, Amaliah compared the pain to be “even more dreadful” than giving birth. Unable to get up. Unable to use the toilet. Unable to spend time with her children. These were the basics of Amaliah’s everyday life, yet she physically wasn’t able to do them anymore. Disheartened, Amaliah was on hospital leave for nearly a whole month and had to carry a urine bag for 2 weeks during her recovery.

With her womb removed, some of you might be wondering, “does that mean no more menstruation?”

You’re right – Amaliah doesn’t get her period anymore, and she takes comfort in the fact that she already has 2 children too. However, while not experiencing the hassle of menstruating every month might seem like a perk, Amaliah never expected to instead feel upset.

“I was only 38 and didn’t even have PMS or menses anymore. I know that all women will eventually stop having their period some day, but to lose the feeling of womanhood at a young age was a very big change. My morale went down by a lot.”

As women, getting our monthly period and wearing pads are something that we’re so accustomed to, we don’t stop to think about how it would be like for it to suddenly disappear forever. But despite these negative feelings, Amaliah tries to see the positivity too.

“It was also a hidden blessing, because I didn’t have to undergo chemotherapy or radiotherapy. A few months ago recently, the doctor did another CT scan and MRI, and declared that I was free of cancer. I was so relieved.”

How the screening saved her life 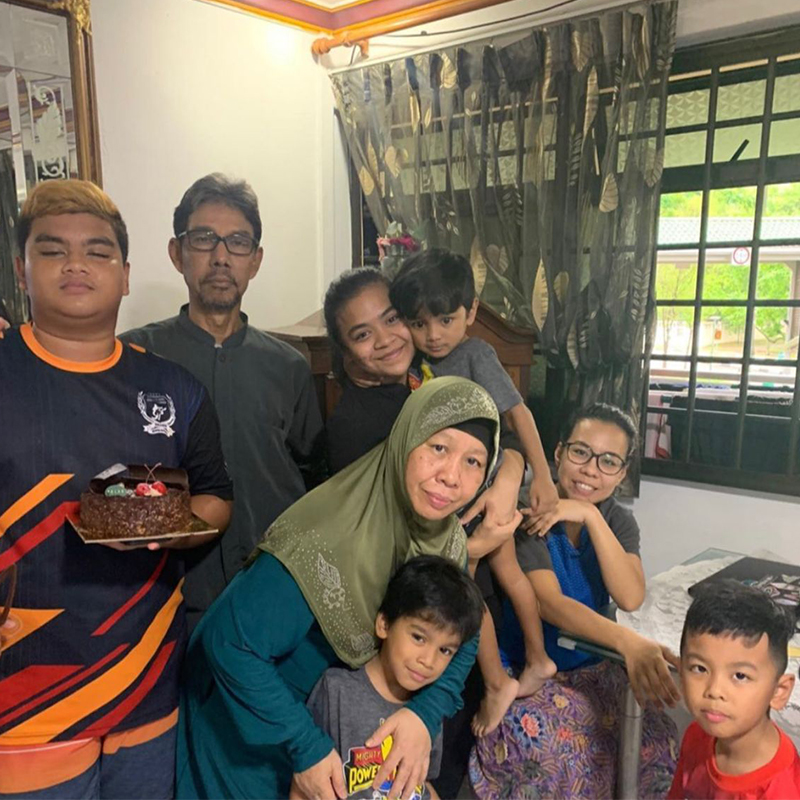 After going through this ordeal, Amaliah has been warning everyone around her to go for health screenings more regularly. As cliché as this sounds, prevention is always better than cure, and Amaliah only learned it the hard way.

“No matter how much you think you’re fine, just go and check. It won’t even take up that much time and it’s not painful.”

To the people who are scared of screenings because of the possibility of discovering cancer, Amaliah retorts, “isn’t it better that you discover it early? Then you can begin treatment, rather than sit on it for so long that it turns into something irreversible where treatment isn’t an option anymore.”

However, Singapore is still stuck in a very traditional mindset, especially for the older generation, that going to the doctor means that you’ll discover something bad about yourself. It’s a common misconception, especially since cancer is not often talked about in school either.

HPV vaccines were only introduced in secondary schools in 2019. This means that till today, many young women still do not know much about cervical cancer.

“Now, people are encouraging more youngsters to do vaccines and go for screenings. But I wish that they had done it earlier during my time — I wish it was available during my time. Can you believe it — taking my very first pap smear at 37 years old and being diagnosed with cancer? The screening saved my life.” 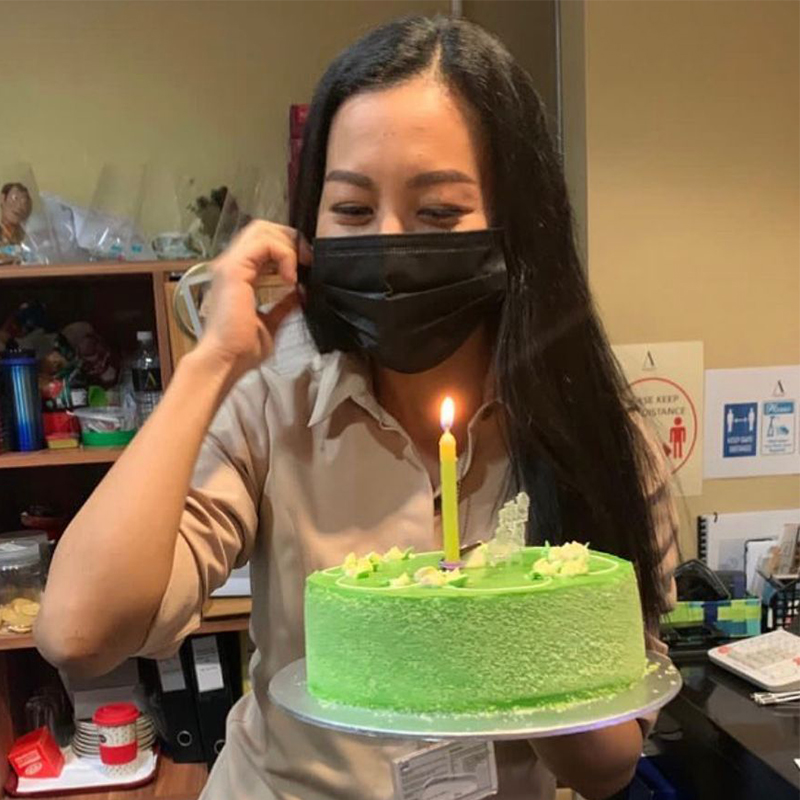 What’s the post-treatment life like for Amaliah now? She’s still doing the things she loves, like jogging and taking care of her health much better now. “I appreciate my treatment and I don’t take it for granted. Plus, I’m seeing life differently as a cancer survivor now.”

When it comes to cervical cancer symptoms, Amaliah also warns that these are “so vague and mild, sometimes we pass it off as other symptoms instead.”

“I didn’t think I had cervical cancer at all. My period came regularly and I had typical cramps that most girls are used to. But the doctor told me that these cramps could have been one of the symptoms. I couldn’t believe it, after all, almost everyone has cramps while menstruating.”

Cervical cancer is the 10th most common cancer affecting women in Singapore. Listening to Amaliah’s “symptoms” made me realise why that is so — there’s almost no way to detect its existence other than a pap smear.

I’m not going to lie — listening to her made me a little paranoid and wanting to go for a screening ASAP too. I shared these thoughts with Amaliah, and she laughed while giving me a nod of affirmation, saying, “yes, please go. It’s not painful at all!”

“I can’t imagine what it would be like if I didn’t go for any treatment. Unlike breast cancer where detecting a lump is one common symptom, the doctor told me that with cervical cancer, there isn’t even any pain until it’s too late.”

Advice to other women in Singapore 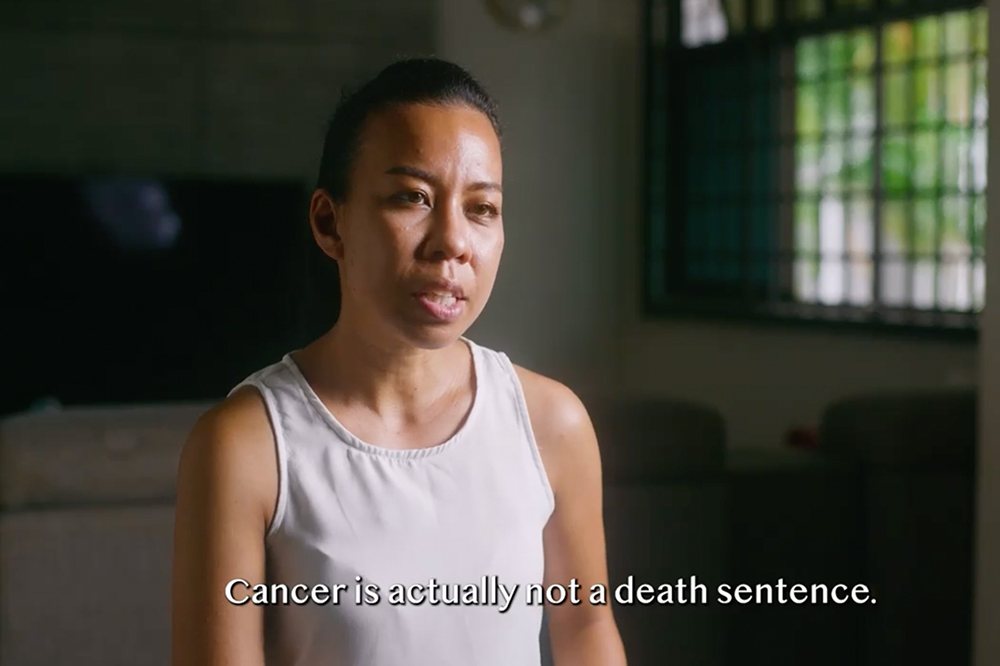 To the women who are afraid of going for health screenings, Amaliah shares some words of advice: “think positively and have an open mind. This is for your own benefit.”

“People might think that cancer affects older people only, but it’s not true. If you go for a check and your results are okay, that’s good. But if it’s not, don’t be disappointed or lose hope. You can always get better.”

And for those who are already diagnosed with cervical cancer, Amaliah shares her story in hopes that you know that you’re not alone. “Get treatment and listen to the doctor’s advice. Spend time with your family members and loved ones. Though my journey was very difficult, I was very thankful that I could do something. Of course, I wanted to stay alive.”

“Cancer is not a death sentence. Don’t think so much about it and continue to do what you love — life still goes on!”

Despite being diagnosed with cervical cancer, Amaliah keeps her head up and uses her story to encourage more women to go for health screenings. Since her recovery, she has been going for health checks every 6 months, unlike previously, where she barely went at all.

Cervical cancer is one of the most preventable cancers among women. The younger generation is more familiar with the Human Papillomavirus (HPV) vaccine, aka the primary strategy for cervical cancer prevention for females aged 9 to 26 years old. But regular screening is just as important to allow for early detection and treatment.