Having made headlines for more than a decade, she recounts that her first viral blogpost was about handicapped toilets. She wrote the post after her brother witnessed an able-bodied man being shouted at for using a handicapped toilet. The post caused 2 brands to drop her as an ambassador but made her a household name.

Despite audiences becoming more ‘woke’ over the years, Wendy is quick to assert that she has not changed the way she writes or speaks since she started blogging in 2003.

“The fact that they are more ‘woke’ irritates me to be even more politically incorrect. I enjoy making people who don’t like me get upset,” Wendy explains.

In recent years, she has continued to do witty commentaries on YouTube like why she is not a feminist and exposing influencers on Social Blade. As we are all familiar with Xiaxue the newsmaker, I wanted to know her more vulnerable side. I ask about her difficulties in starting a family.

She laughs and replies, “You asking me if I took very long to get pregnant ah?”

The difficulty of motherhood 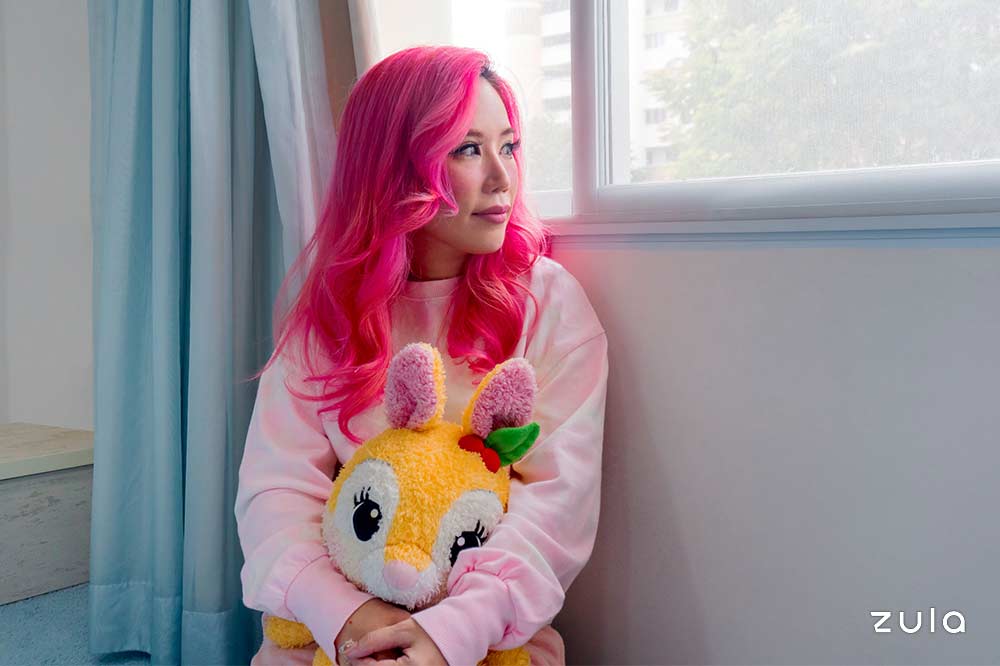 “I wish someone told me how much guilt it involves. It’s a constant feeling of guilt and worry,” Wendy explains the perils of motherhood.

She tells me that most parents will describe the highs such as when your child begins to walk or tells you “I love you” for the first time. But they usually discount the lows, like feeling helpless when your child runs a high fever.

Wendy proceeds to describe the worst day of her life.

She was carrying her baby Dash to Nuffnang for a photo shoot but slipped and fell down the stairs. She tried to hold Dash in a way that would protect his head but his head still hit the floor. As a result, her entire legs were scraped with blood dripping down, but she could not feel the pain.

Instead, she kept thinking, “Did I cause him to die because I fell down the stupid stairs?”

Being a mother is a gamble

She affectionately describes Dash, “He’s such a sweet boy and he’s so cute and he’s very guai (‘well-behaved’ in Mandarin).” However, she will not be having a second child. “I hit the jackpot once, I’m not gonna hit it again, so close shop.”

“I’m a person who doesn’t like taking risks. With a baby, it’s the biggest risk of all. You never know what you’ll get, you’re gonna be stuck with that forever. It’s very politically incorrect to say this, but there are kids who bring absolutely no joy to their parents.”

Feeling extremely low when Dash was sick helped her to understand that parents with children who are not healthy can bring about much misery. Being a mother can also mean giving up a big part of your identity.

“If your entire life is about the child, you start to feel resentful to the kid. You [will] never [have] the quality of life you had before. You are no longer you. You are now just the mother,” she says before adding that there are some self-sacrificial mums who are “happy to do that”.

“If your life is already fine, it won’t make you more happy or more sad,” she sums up about having children.

Being married to an American 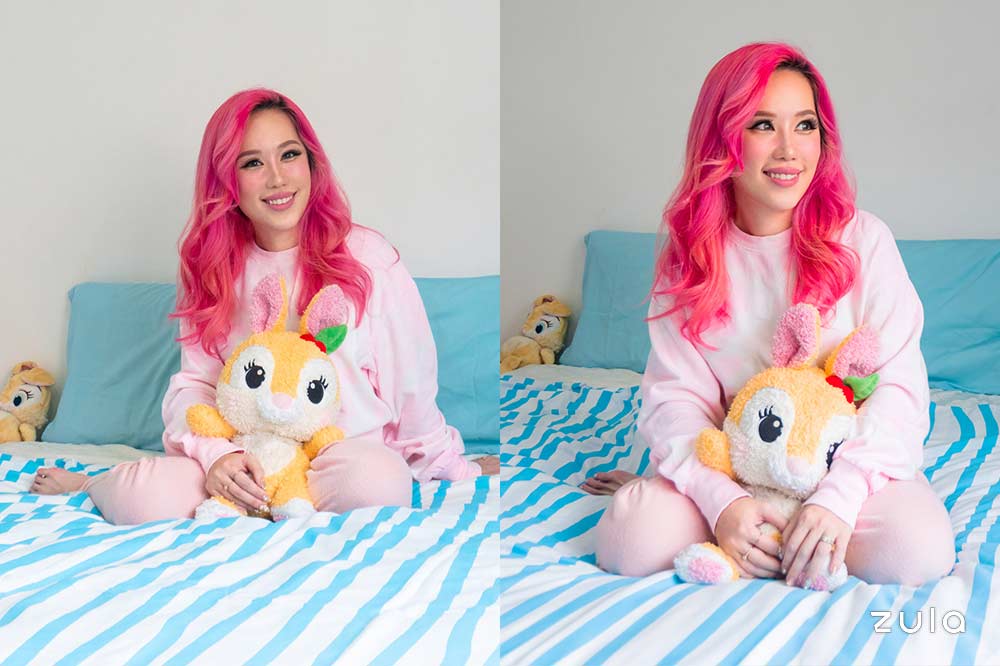 I ask her about the other man in her life: her husband Mike. They met online when he emailed her through her blog and started chatting with her via MSN. Mike decided to visit her in Singapore and they have been in love ever since.

“I always feel guilty that I stole my husband away from his family. I feel sad for him that he is here instead of being in America with them.”

She goes on to explain that Mike, who is an engineer by training, compromised his career when he moved over as engineers are less respected here than in the United States.

“At the start of the relationship, I told him, ‘I’m not going to move out of Singapore. Everything I have and love is here.’ He’s still keeping his promise, which I feel is very honourable,” she expresses emotionally.

Her fallout with friend and influencer Yan Kay Kay

Besides her family, the public is well-acquainted with her famous friends. Wendy opens up about her fallout with her friend Yan Kay Kay. Cracks in their friendship began to show when Kay Kay mentioned she wanted to be a blogger just like Wendy.

She gives an analogy, “If [I am] the top chicken rice seller in Singapore, I let you taste my chicken rice, I let you into my life and let you know how I cook it… then suddenly one day you tell me, ‘I also want to sell chicken rice.’”

“At that point, that idea that you should start a blog for the sole purpose of earning money, that already irritated me… you shouldn’t be doing this to earn money, you should be passionate about it.”

Despite how she felt, Wendy tried to be supportive at first. But eventually, Wendy decided that Kay Kay was “a changed person. She became Kay Kay the influencer, not Kay Kay the part-time model, the girl that I played mahjong with that nobody knew.”

In December 2014, Kay Kay was in Wendy’s line of fire when she dropped her Gushcloud exposé. The post claimed that the influencer network had inflated their revenue and influencers’ numbers. Kay Kay was one of Gushcloud’s influencers who was implicated.

Meeting up with Kay Kay and Qiu Qiu recently

Recently, Wendy organised a meetup with Kay Kay, Bong Qiu Qiu and Yutaki James, friends she had fallen out with over the years. She describes the meetup as “dramatic”. She elaborates, “It ended well. That meetup was pretty good for me, because I harboured a lot of anger at them.”

They managed to clarify their misunderstandings towards each other. Still, Wendy explains why it’s hard to get close to those people again, “It’s very difficult when there is so much history and so much bad blood. The fact that they are a group [also] makes me feel very insecure.” 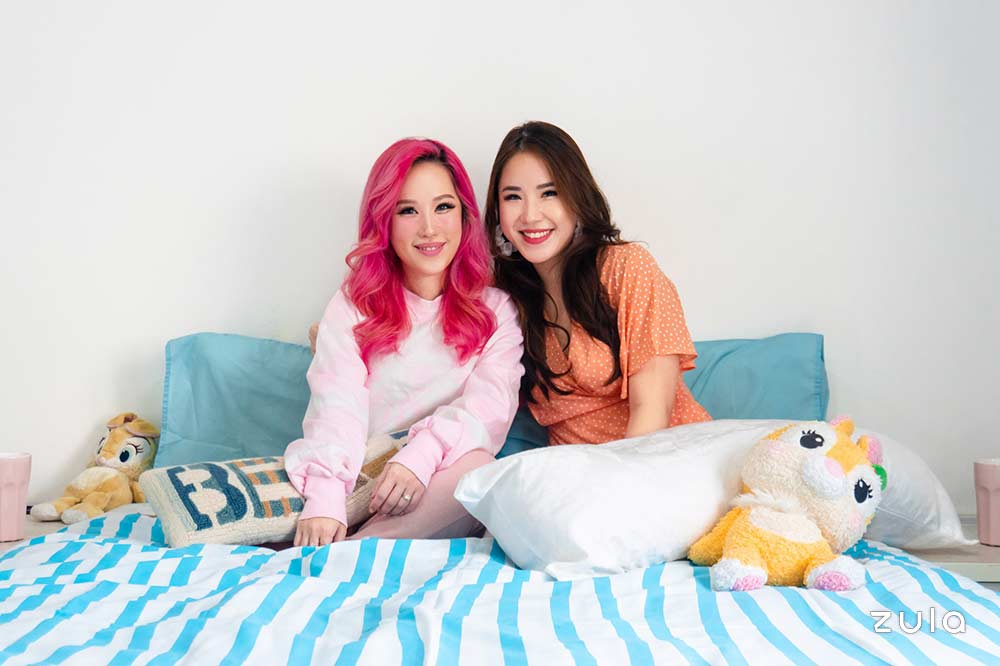 Wendy with her friend and host of Zula Pillow Talk, Jessica Loh

Currently, she has found a new group of BFFs, whom she is thankful for: Jessica Loh, Sophie Willocq and Mongchin Yeoh (Mongabong).

No matter how Xiaxue found fame, nobody has leveraged it better than her. She also takes some responsibility if you find yourself feeling disdain for influencers.

“I was the first bimbo that came and talked about my life, the boys that I like and the clothes that I buy. That started the ball rolling for a lot of young girls who shared [about] their [lives]. And a lot of them are so freaking stupid. They cannot even speak English properly.”

Her self-awareness, intelligence and natural sass have made her an unstoppable force and irreplaceable voice in Singapore. Meeting her feels like chancing upon a legendary Pokemon disguised in pink hair and false eyelashes.

Despite the hate she constantly receives, I walk away feeling the deep love she has for her son, husband, friends and fans.

“Even if the money doesn’t come in, you still have your followers. To me, that’s really valuable and something that I treasure a lot.”