Whether you’ve only heard about Jade Rasif from the Ministry Of Manpower (MOM) “drama” or you’ve been a fan of her DJ-ing over the years, you can’t deny that she’s the ultimate queen of beauty and brains. From raising her son as a single mother to joining the healthcare industry, we’ve compiled a list of iconic things Jade Rasif has done that crowns her this title.

1. Called out the Ministry Of Manpower for their mistake 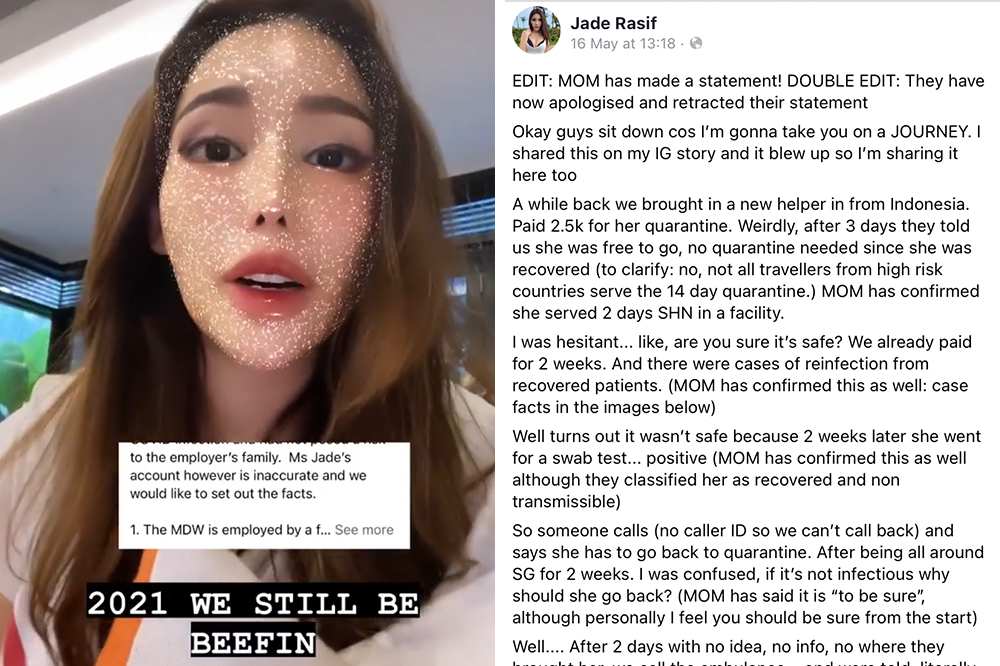 Many of us are familiar with the most recent “drama” surrounding Jade and the Ministry Of Manpower (MOM). ICYMI, Jade’s family brought in a new helper from Indonesia and paid $2,500 for her quarantine, yet the helper was sent to her house just after 3 days. 2 weeks later, the helper was called in for a swab test and tested positive, while Jade was investigated by the police for a “potential breach of quarantine order”.

After calling out MOM for their mishaps on her Instagram story, MOM responded on Facebook stating that Jade’s facts were “inaccurate”. Jade was displeased with MOM’s reply, launching another series of Instagram Stories with factual evidence of her account. These stories are currently still pinned to her Instagram profile as a highlight titled “mom”.

MOM has since apologised to Jade and retracted their original points. Jade has shown us that we shouldn’t be afraid to set things right when we’ve been wronged. We all deserve an explanation and apology in such unjust cases, even if it is coming from a position of power.

2. Raising her son by herself

In 2018, Jade announced that she gave birth to a baby boy, reportedly rejecting a proposal from the baby’s father. In an interview with Asia One, Jade sees her own mother as her role model for bringing up 3 children by herself after their father left. It was then she knew that “as long as I buckle down and work hard, I can give my son the best life.”

Besides taking pride in being a strong and independent single mother, Jade revealed in the same interview that she does not want any pictures or information of her son to be on social media. She respects her son’s privacy and wants him to be able to consent to the idea of having his pictures posted. Despite constantly being in the public eye, Jade’s protective fondness for her son is heartwarming, claiming that “as long as the child is loved and cared for, then I don’t think it’s anybody’s business.”

3. Switched her career to healthcare during the pandemic 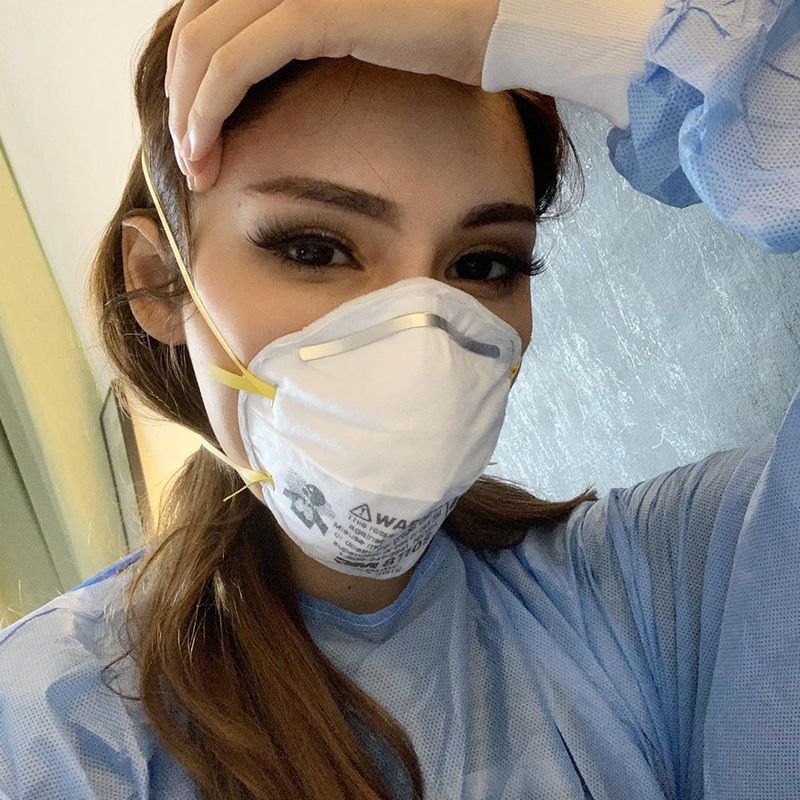 Last year, in August 2020, Jade took to her Instagram to announce that she has been volunteering for the healthcare sector since April when the pandemic hit Singapore. Jade claims that many people were “shook” by this revelation as she previously worked as a DJ. She surprised us further by proudly announcing that she would be staying on full time in healthcare.

Besides encouraging people to try volunteering as well since the pandemic has been tough for many, Jade also cautioned many fresh graduates to do their job hunt research thoroughly and not be afraid to try new things.

Her new job comes with sacrifices of not being able to take payment or sponsorships anymore, but she has plans to pursue a nursing degree when the pandemic is over. Her fierce determination is an inspiration to us all.

4. Looked out for the victims involved in Dee Kosh’s scandal 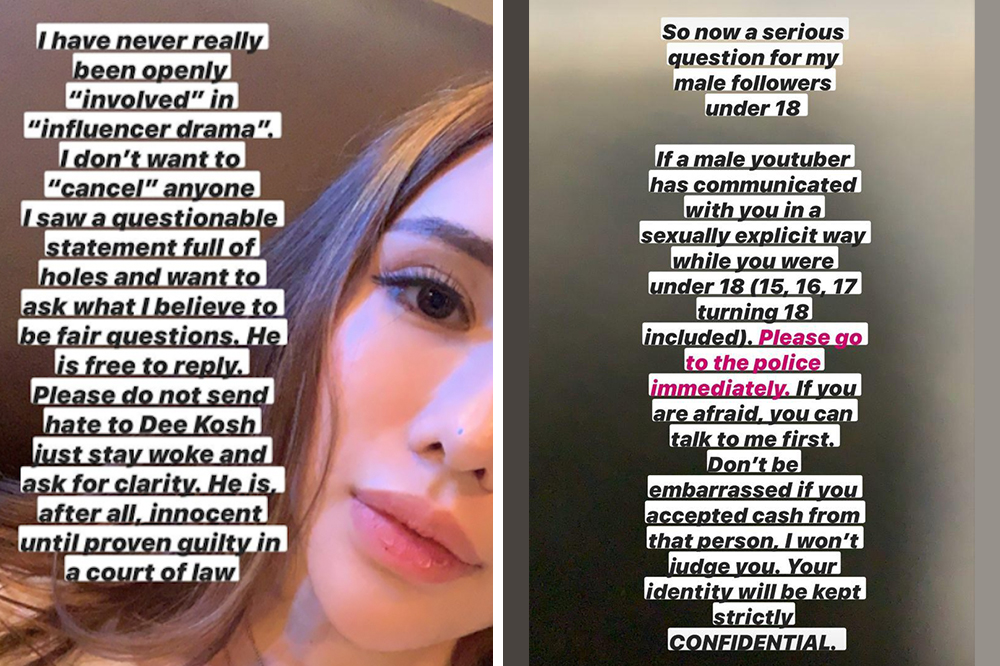 Following the sexual harassment cases surrounding Dee Kosh last year, a radio DJ and Youtuber, Jade wasn’t afraid to use her social media platform to stand up for the victims. She began by publicly asking Dee Kosh for clarification of parts in his apology that weren’t clear, stating that she doesn’t want to “cancel” someone without asking fair questions first.

From then, Jade moved on to address all her male followers under the age of 18, advising them to turn to the police immediately if they had been communicated with in a sexually explicit way. Jade also voiced that she understands that some may be afraid or embarrassed about being judged, thus she opened up her Instagram DMs for these victims to confide in her first and promised anonymity.

Though Jade was not directly involved in Dee Kosh’s “scandal” in any way, she felt compelled to help as one of the victims reached out to her first. She understands the power and voice her platform has and constantly uses it to help the victims of sexual harassment.

5. Publicly open with talking about her plastic surgery 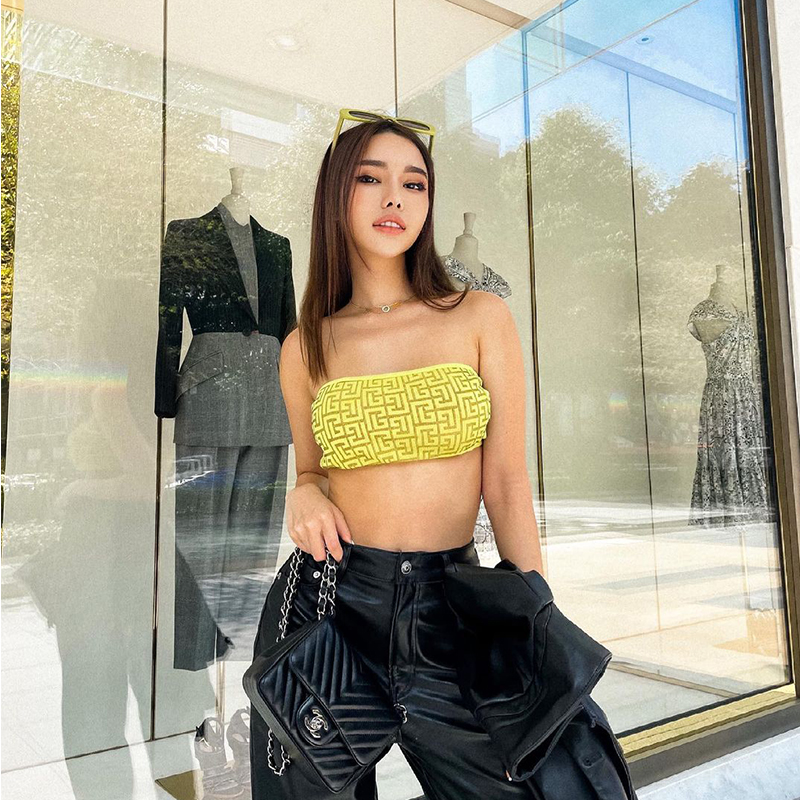 Jade is no stranger to admitting about her experience with plastic surgery. In an episode of Real Talk, a Youtube series where Jade was one of the hosts, she comfortably spoke about the types of procedures she went through. One of the perks of breast enlargement, she claims, is the fact that she doesn’t have to wear a bra since her breasts stay upright.

Despite being confident in sharing about her plastic surgery experiences, Jade says she refuses to accept plastic surgery sponsors. On Real Talk, she reveals, “I don’t think that I should be promoting [plastic surgery], especially to my younger viewers. I don’t feel like I should be overly pushy about the emphasis on looks and looking altered.” However, for those who have gone through plastic surgery, Jade claims “you just have to own it!”

For those who don’t know, Jade has a second Instagram account called @simp_4_me. Last year, Jade took to this account’s Instagram Story to talk about a disturbing occurrence of Singaporean teens as young as 14 and below sending photos of their private parts in her DMs.

While disturbed by the onslaught of these pictures, Jade felt concerned that the younger generation doesn’t think about the consequences of their actions. As these photos could be “out there forever” on the internet, Jade warns about the possibilities of sexual predators or even users engaging in child pornography. Even as a victim of such nasty pictures, Jade still takes the time to show concern to her young audience and educates them.

7. Spoke up about gender stereotypes for International Women’s Day 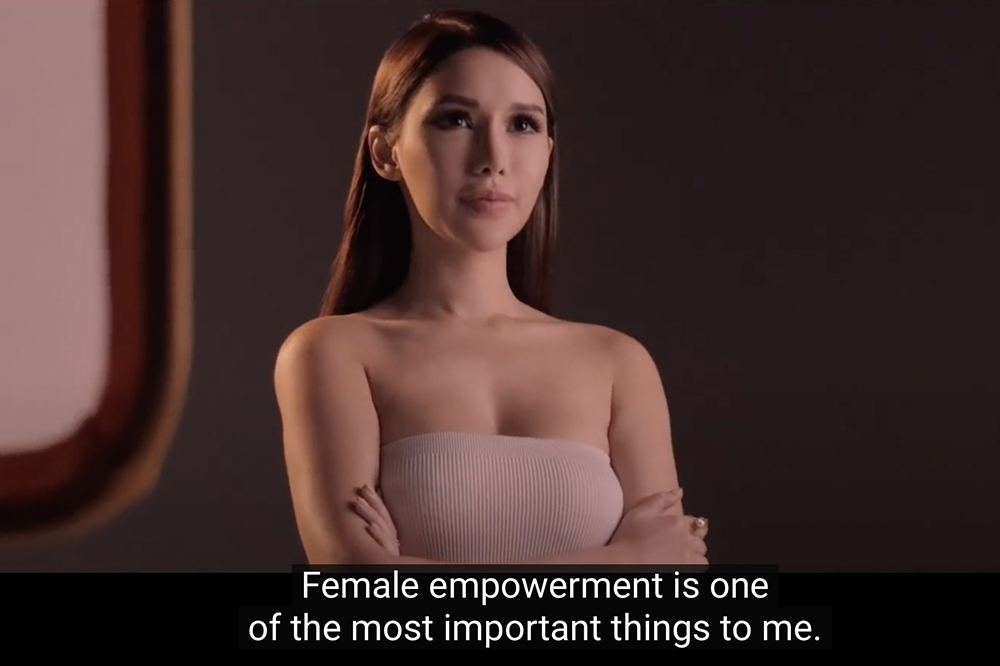 For International Women’s Day 2021, Jade, along with other local personalities such as Preetipls and Farah Lola, spoke about gender stereotypes on MTV Asia. In Jade’s introduction video, she talked about how people labelled her as a “sexy DJ” and how she has grown into that image. Despite that, she firmly states that “women should be able to define themselves however they want to define themselves… they should absolutely have that power of choice”.

With over 416,000 followers on Instagram, it’s clear to see that Jade isn’t afraid to make use of her social media presence to set things straight if necessary. Beyond the glitter and glam of the cameras, Jade Rasif keeps it real, while remaining open and kind to her audiences and the people around her. From reading through this list of iconic things Jade Rasif has done, we stan.